Aim of the present study was to isolate and characterize the biochemical principle and investigate the hypoglycemic activity of bark of Alangium salviifolium Wang in Alloxan induced hyperglycemic rats. The bark of Alangium salviifolium barks were collected and dried in shade and subjected to extraction with petroleum ether, Chloroform and methanol. Each extracts were subjected to preliminary phytochemical analysis. Petroleum ether and Chloroform extract were subjected to chromatography. Two compounds were isolated and purified by alcohol then, subjected to physical and spectral studies. Spectral results revealed that isolated compounds may be phytosteroids. Hypoglycemic activity was performed by alloxan induced method. MEAS were administered orally to the hyperglycemic induced rats at the dose of 250mg/kg, 500mg/kg and 750mg/kg. Glibenclamide was used as reference drug. Then blood glucose levels were measured at the time interval of 30 mins, 1, 2, 3, 4 hrs and 8hrs by one touch glucometer. Then blood samples were collected from all rats and evaluated for biochemical parameter. Significant reductions in the blood glucose levels were observed. The dose of 750mg/kg exhibited more significant (P<0.001) hypoglycemic activity as compare to the doses 500mg/kg and 250mg/kg. The present study reveals that bark extracts of Alangium salviifolium can be used as hypoglycemic drug.

INTRODUCTION: Alangium salviifolium Linn (Alangiaceae) is a small deciduous tree or shrub, which grows in the wild throughout the hotter parts of India 1. It belongs to the family Alangiaceae. This family consist one genus with twenty two species, out of which Alangium salviifolium Wang is the only species used medicinally in India, China and Philippines. Stem bark is pale brown, aromatic, rough with shallow cracks, exfoliating in sub-corky scales. Leaves  are 8 to 13 cm in length and 3 to 5 cm in width alternate, variable in shape, oblong or elliptic oblong, acuminate base rounded or acute, glabrous above and sparsely pubescent beneath, up to 15 cm long, long-petioled. Flowers are white, fragrant, in axillary fascicles; drupes ellipsoid, black, crowned by persistent calyx, edible. Root bark is an antidote for several poisons. Fruits are sweet, used to treat burning sensation, constipation and haemorrhage. The leaves are used as poultice in rheumatism 2, stem barks exerts a biphasic action on the blood pressure in cats at lower doses and marked hypotension in higher doses 3. This plant has been used as hypoglycemic in ayurveda treatment, but there is no scientific evidence for this activity. So, an effort has been made here to screen the plant for its hypoglycemic activity.

Diabetes mellitus is a group of metabolic disorders characterized by hyperglycemia and defective metabolism of glucose and lipids. Diabetes was estimated to affect 177 million people world wide in 2000 and this is projected to increase to 300 million by 2025 4. Diabetes is not a single disease rather it is a heterogeneous group of syndromes characterized by an elevation of blood glucose caused by relative or absolute deficiency of insulin. Diabetes can be divided into two main groups based on their requirements of insulin: insulin dependent diabetes mellitus (Type 1), and non-insulin dependent diabetes mellitus (Type 2).

However, other types of diabetes have also been identified. Maturity Onset Diabetes of the Young (MODY) is now classified as Type 3 and gestational diabetes classified as Type 4. NIDDM type 2 diabetes account for about 90 percent of diabetic case. Insulin resistance and β-Cell dysfunction are the metabolic abnormalities in the type 2 diabetes 5. Glycemic control is one of the targets for managing diabetes mellitus. Studies have confirmed that for the type 2 diabetes, effective control of blood glucose substantially decreases the risk of developing diabetic complications.

Thus the objective of the study was to isolate, characterize and investigate the hypoglycemic activity of Alangium salviifolium Wang bark.

Collection & authentication of plant: The bark of Alangium salviifolium wang was collected in the month of July, 2010 from the outer area of Dharmapuri, Tamil Nadu, India. The collected plant was identified and authenticated by Dr. P. Jayaraman, Director, National institute of herbal science, Plant Anatomy Research Center, West Tambaram, Chennai, Tamil Nadu, India. The specimen no. of Alangium salviifolium is PARC/2010/572.

Extraction: The barks of the plant were shade dried at room temperature. Then Barks of the Alangium salviifolium were crushed to coarse powder by grinder and passed through mesh sieve to ensure coarse powder. About 240 gm of coarse powder was successively extracted with 2 liters each of Petroleum ether, chloroform, methanol in a soxhlet apparatus for 48 hrs. The resulting extracts were concentrated to dryness at reduced pressure and temperature. All the extracts were stored in a container for further use.

Preliminary Phytochemical investigation: These extracts were subjected to preliminary phytochemical analysis by standard procedures for identification of various phytoconstituents present in the bark of Alangium salviifolium Wang.

Animals:  Male albino-Wistar rats weighing 150-250g were used for this present study. All rats were kept at room temperature of 25±2°C in the animal house. Animals were allowed free access to standard dry pellet diet and water ad libitum. All laboratory procedures involving laboratory animal use were followed in accordance to the Institute Animal Ethics Committee guidelines. The experimental protocols were approved by institutional Animal Ethical Committee & a written permission from in house ethical committee has been taken to carry out (Reference no. JKKMMRFCP/IAEC/2010/004) and complete this study.

Hypoglycemic activity: All animals were randomly selected and grouped into six of each containing six animals. All animals were fasted overnight then those were made hyperglycemic except group-1 by injecting alloxan monohydrate dissolved in distilled water at a dose of 120 mg/kg body weight, by the intraperitoneal route. After one hour of alloxan administration, the rats were given food and water ad libitum 7. The blood glucose concentration levels of the rats was measured after 72 hours of alloxan injection using one touch glucometer, to determine the presence and level of hyperglycemia and results were reported as mg/dL. Animals in group 1 were administered with normal saline. Animals in groups 2 were administered with 3 mg/kg glibenclamide, respectively. Animals in groups 3, 4, and 5 were treated with 250, 500, and 750 mg/kg dose of Methanolic extract of A. salviifolium bark, respectively.

After treatment, the blood glucose concentration level was measured at half, 1, 2, 3, 4 and 8 hours intervals using one touch glucometer and results were reported as mg/dL. Reductions in Blood glucose level were observed to determine the effective dose 8. After this treatment with MEAS, blood was collected by cardiac puncture under mild ether anesthesia from all the rats. Blood was collected in tubes containing EDTA as anticoagulant. Plasma and serum were separated by centrifugation at 4,000 rpm for 10 minutes. After centrifugation, the clear supernatant was used for the analysis of various biochemical parameters by using commercial kit method.

Statistical analysis: All the values were expressed as mean ± standard error of mean (S.E.M) and was analyzed for significance by ANOVA and groups were compared by Tukey-Kramer multiple comparison test, by using InStat v.2.02 software (Graph Pad Software Inc.). Differences between groups (p Value) were considered significant upto P<0.05 level. 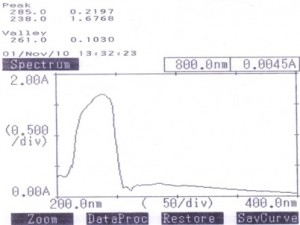 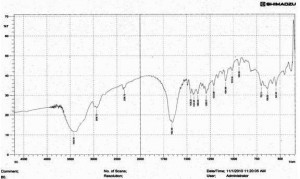 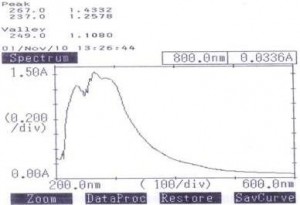 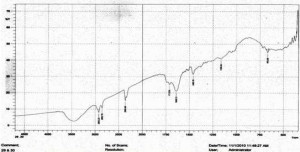 TABLE 1: TLC PROFILE OF COMPOUND – A

TABLE 2: TLC PROFILE OF COMPOUND - B

Melting point, chemical characterization and Spectral data of both compound-A and compound-B belongs to the account of Phytosterols.

The dose of 750mg/kg exhibited more significant (p<0.001) hypoglycemic activity as compared standard and hyperglycemic control. Results were given in table 3 and figure 3.

Biochemical parameter evaluation showed that Administration of MEAS and Glibenclamide to hyperglycemic rats significantly decreased glycolated haemoglobin and increased serum insulin to near normal level showed in table 4. The level of cholesterol and triglyceride increased in hyperglycemic animals when compared to control animals. After MEAS treatment, the higher level of both cholesterol and triglyceride were decreased to near control.

The level of HDL in serum of hyperglycemic animals was decreased. These lowered levels of HDL-cholesterol were restored significantly near to normal in MEAS treated hyperglycemic groups. Treatment with MEAS is significantly p<0.001 improved the lipid profile in Alloxan induced hyperglycemic rats. Results are shown in table 4, 5, 6 and figure 4, 5, 6.

N=6. Values were expressed as mean ± SEM and analyzed by Tukey-Kramer Multiple Comparisons Test.  Values are statistically significant at ***p<0.001. (a = p<0.001; b = p<0.01). All treated groups compared with hyperglycemic control group 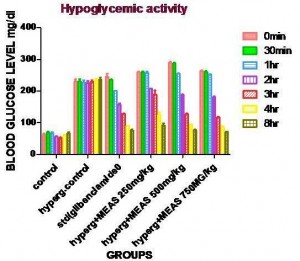 TABLE 4: EFFECT OF METHANOL EXTRACT OF A. SALVIIFOLIUM WANG BARK AND GLIBENCLAMIDE ON PLASMA INSULIN, HbA1c OF CONTROL AND EXPERIMENTAL GROUPS OF RATS

Values are given as mean ± S.E.M for groups of six animals each. Values are statistically significant at ***p<0.001. (a = p<0.001; b = p<0.01) All treated Hyperglycemic groups (IV-VI) were compared with Hyperglycemic control group and control 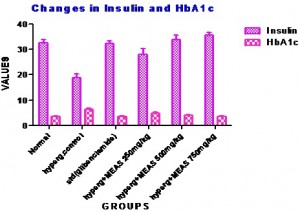 FIG. 4: CHANGES IN INSULIN AND HbA1c

TABLE 5: EFFECTS OF METHANOLIC EXTRACT OF A. SALVIIFOLIUM BARK AND GLIBENCLAMIDE ON TOTAL CHOLESTEROL, TRIGLYCERIDES LEVELS OF EXPERIMENTAL GROUPS OF RATS

Values are expressed as mean ± S.E.M for groups of six animals each. Values are statistically significant at ***p<0.001. (a = p<0.001; b = p<0.01).MEAS treated hyperglycemic rats (IV-IX) were compared with hyperglycemic control group 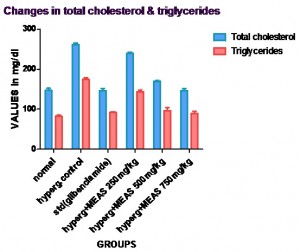 TABLE 6: EFFECT OF METHANOLIC EXTRACT OF A.SALVIIFOLIUM WANG BARK AND GLIBENCLAMIDE ON HDL, LDL, VLDL OF EXPERIMENTAL GROUPS OF RATS

Values are expressed as mean ± S.E.M for groups of six animals each. Values are statistically significant at ***p<0.001. (a = p<0.001; b = p<0.01).MEAS treated hyperglycemic groups (IV-VI) were compared with hyperglycemic control group

From the physical, chemical characterization and spectral studies of the isolated chemical constituents, Compound-A & Compound-B may be Phytosteroids.

The methanolic extract of Alangium salviifolium Wang bark 750mg/kg showed potent hypoglycemic activity as compared to MEAS (250mg/Kg, 500mg/kg) and standard Glibenclamide in alloxan induced hyperglycemic models. The result data suggested that the extract containing compounds such as phytosterols and flavonoids may be responsible for its hypoglycemic activity. The present study revealed that bark extract of Alangium salviifolium Wang can be used as hypoglycemic drug.

ACKNOWLEDGEMENT: This work is carried out at the Department of Pharmaceutical Chemistry, JKKMMRF College of Pharmacy, Komarapalayam, Namakkal (Dt), Tamil Nadu, India. Authors are highly thankful to the Secretary and the Principal for providing the facilities.