ABSTRACT: Isolation, identification, culturing, and chemical screening of a marine-associated bacterial strain, S6.2, were performed in this study. Anti-MRSA analysis of its extract was also conducted. Strain S6.2 was isolated from an unidentified red marine sponge and identified as Zooshikella kangwensis by 16S rDNA sequencing and biochemical characterization. On marine agar, the colonies embedded in the media and were pinkish and circular with oily smooth skin. Maximum growth was observed at 78 h (200 cfu/ml) and minimum growth at 168 h (23 cfu/ml).The purified bacteria were cultured in marine broth; cell density started to increase after 3 h and proceeded to the lag, exponential, stationary and dead phases at 24, 30, 78, and 132 h, respectively. Based on LCMS/MS analysis, strain S6.2 produced pinkish pigments: prodigiosin and two prodigiosin derivatives, namely 2-methyl-hexyl-prodiginine and 2-methyl-3-propyl-prodiginine. Anti-MRSA activity deduced by thin-layer chromatography (TLC) direct bioautography revealed that the active constituents contained in an ethyl acetate extract were nonpolar compounds. The MIC values varied between 12.5 and 25.0 µg/ml, while the MBC value was 50 µg/ml.

The metabolite prodigiosin was first isolated from the terrestrial soil bacteria Serratia marcescent, and various prodigiosin-producing microorganisms have since been discovered; for example, Psudoalteromonas sp., Streptomyces griseoviridis, and Vibrio psychoerythrus) 1.

Prodigiosins have shown promising antimicrobial activity against several pathogenic organisms, such as Klebsiella aerogences, Escherichia coli, and Staphylococcus aureus 2. Here, we report the isolation and culture of a prodigisin-producing marine bacteria, Zooshikell akangwensis, collected in the Andaman Sea, Thailand, as well as the potential of its extract to inhibit methicillin-resistant S. aureus (MRSA). MRSA is a pandemic pathogen that causes a wide spectrum of pyogenic lesions involving several organs. It occurs in both nosocomial outbreaks and community-acquired infections 3.

Since 1961, when a worldwide outbreak of MRSA was first reported, it has become increasingly virulent 2. MRSA has been reported to inhibit vancomycin and other potential antibiotics; therefore, the discovery of anti-MRSA compounds should be continued.

MATERIALS AND METHODS: Isolation and purification of associated bacteria: Strain S6.2 was isolated from an unidentified red marine sponge collected from the intertidal zone of Satun Province, Thailand (6×42’57’’N/99º50’36’’N). The sponge was sprayed with 75% methyl alcohol for 30 seconds before the outer skin was peeled off and small pieces of the inside tissue were cut out and used to inoculate Zobell marine agar (HiMedia Laboratories, India). The samples were incubated at 30 ºC for one week (daily observation). The apparently pure colony was picked out by needle and preserved in the same media at 4º C in preparation for further experimentation. For long-term preservation, 15% glycerol was added, and samples were frozen at -80 °C.

Growth Determination: The isolated bacteria were cultured in solid media (MB + 1.5% agar) for 24 h. Subsequently, the media was cut into small pieces (1 × 1 cm), and each piece was added to 100 ml MB for further cultivation on a rotary shaker at 30 ºC (three-time repeat). Growth performance was measured every 3 h (0–168 h) by the plate count technique. Distilled water was used as a control.

Large-scale Cultivation of Strain S6.2 and Crude Extract Preparation: Seed cultures were prepared by inoculating the pure colonies of isolated bacteria in 5 ml marine broth (HiMedia Laboratories, India) and incubating at 30ºC on a rotary shaker for 10 days. The cultures were examined daily for anti-MRSA activity using the agar well diffusion method. The cultures that showed anti-MRSA properties were transferred to 250 ml conical flasks containing 180 ml MB and incubated under the previously described conditions for 10 days. The large-scale culture was performed in 1,000 ml in conical flasks on the rotary shaker. Bacterial cells were broken in an ultrasonic bath (30 ºC, 5 min) and then passed through a filter (0.2 µm). The liquid was extracted with ethyl acetate. The organic layer was separated and concentrated in a vacuum to yield the crude extract.

Clinical Isolation of MRSA: The clinical MRSA strains were isolated from Thasala Hospital, Thailand, using the two-step method described previously 7. First, the cefoxitin disk screening test was used for MRSA detection. Susceptibility of the S. aureus isolate to 30 µg of cefoxitin was determined by the disk diffusion method on Mueller-Hinton agar (MHA) plates using a bacterial suspension equivalent to 0.5 McFarland standards. The MRSA-inoculated plates were incubated at 35ºC for 24 h. The results were interpreted according to Clinical and Laboratory Standards Institute(CLSI) guidelines. For MRSA sensitivity, the inhibition zone was ≤ 21 mm. Second, the multiplex PCR for SCCmecA gene DNA was extracted from MRSA strains using an extraction kit (Qiagen, USA), according to the company’s instructions. Multiplex PCR was performed to detect three loci comprising A, B, and C of the mecA gene for SCC types I, II, and III, respectively. The primers and amplification method used followed Alkharsah et al., 7

Anti-MRSA Assay: The agar well diffusion method was used to examine for anti-MRSA activity. The test solution was prepared by dissolving 50 mg of a crude extract with 2% (v/v) DMSO in distilled water. The MRSA suspension was prepared at a cell density equal to McFarland No. 0.5 standard before spreading on MHA with a cotton swab. After drying, 6 mm diameter wells were aseptically punched into the media with a sterile borer, and 50 µl of test solution was transferred into the wells before incubation at 37 ºC for 24 h. DMSO and vancomycin were used as negative and positive controls, respectively. Thin-layer chromatography (TLC) direct bioautography determination was used to observe the position of active metabolites.

The silica gel F254 TLC glass sheet (Sigma-Aldrich, Darmstadt, Germany) was cut to the appropriate size before the extract was spotted on. It was then developed in an appropriate mobile phase (a mixture of hexane, dichloro-methane, and methanol (8:1:0.2, v/v) before being dipped into an MRSA suspension (106 cfu/ml). Each TLC bio-autogram was incubated at 25 ºC for 48 h under humid conditions and then sprayed with tetrazolium salt. A clear white spot indicated the position of active constituents. The MIC was determined by the broth dilution method using a 96-well microtiter plate. The MRSA strain was standardized to MacFarland No. 0.5 with MHB before use. The test extract was dissolved in DMSO and serially diluted to between 10 and 0.15 mg/ml; then, 100 µL of the MRSA strain was transferred to a well following by the addition of 50 µL of the extract. The plate was covered and incubated at 37 ºC for 24 h. Vancomycin and 2% DMSO in water were used as positive and negative controls, respectively. After incubation, antimicrobial potential was detected using amicroplate reader at a wavelength of 690 nanometer (nm), and MIC values were recorded at the lowest concentration inhibiting MRSA growth. The MBC determination was performed by taking 50 µl aliquots from wells that had no visible bacterial growth and streaking the aliquots onto MHA, then incubating them at 37 ºC for 24 h. The lowest concentration that inhibited 99.9% of MRSA growth was recorded as the MBC value.

RESULTS AND DISCUSSION: The strain S6.2 was isolated from an unidentified red marine sponge and identified by morphological observation with a scanning electron microscope (SEM), 16S rDNA analysis, and biochemical examination. Gram staining (data not shown) revealed S6.2 to be a Gram-negative bacterium with a slightly curved rod bacilli shape, which was observed by SEM imaging Fig. 1.

On MA, the colonies were embedded in the solid media and showed a pinkish color, circular shape, and smooth oily skin Fig. 1. For genetic characterization, a 16S rDNA sequence was deduced and matched with data in GeneBank. The 16S rDNA sequence of S6.2 is similar (99.80%) to a previously described bacterium, Z. kangwensis8. Phylogenic tree alignment Fig. 2 revealed that S6.2 is closely related to Z. kangwensis with a 99.0% similarity value. This was confirmed by biochemical examination, as shown in Table 1. To mass produces the active constituents, strain S6.2 was cultured in a 1 L conical flask for 84 h (to obtain a high concentration of products in the shortest time). The cultured bacterial cells were extracted with ethyl acetate to yield 500 mg.

FIG. 1: COLONY FEATURE ON MA AND SEM MICROGRAPH OF A STRAIN S6.2

FIG. 2: NEIGHBOR-JOINING PHYLOGENETIC TREE BASED ON THE 16S RDNA SEQUENCE ANALYSIS OF THE STRAIN S6.2

Strain S6.2 was cultured in MB medium on a rotary shaker, then the growth pattern was recorded Fig. 3. The results showed that the bacteria began to increase in cell density after 3 h and progressed to the lag phase in 24 h. After 30, 78, and 132 h, bacteria progressed through the late exponential, stationary, and dead phases, respectively. The maximum growth was observed at 78 h (< 200 cfu/ml), while minimum growth was obtained at 168 h. 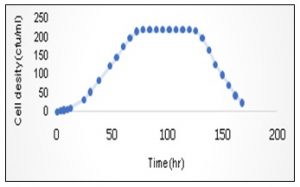 Our experiment revealed that strain S6.2 grew well in MA medium at a temperature of 30 ºC in aerobic conditions, while the Korean tidal flat strain JC2044 grew at an optimum temperature of 35 ºC on the same medium 10. Pigment synthesis of strain S6.2 was found to be related to growth performance and culture media. The synthesis of pinkish pigment and anti-MRSA metabolites were first recorded at 72 h (exponential phase). Subsequently, high levels of the pigment accumulated in the cells during the stationary and dead phases (78–168 h). Similarly, anti-MRSA metabolites were synthesized during the late exponential and stationary phases. They showed the highest concentration during the stationary and dead phases, indicated by a zone of inhibition, as shown in Table 2.

Remark: MRSA142 and MRSA2468 are the clinical isolation that was isolated in this study.

This phenomenon can be explained by the principle of secondary metabolite synthesis. In the stationary phase, the bacteria grew in a regular fashion while the metabolic waste accumulated in the medium, stimulating the stress induction of cultured bacterium. Thus, the bacteria adapted to this stress and nutrient starvation by synthesizing the pigments and/or active metabolites. This situation became evident when the growth reached the dead phase and the highest concentrations of pigments and/or anti-MRSA metabolites were observed.

The pigments synthesized by the genus Zooshikella have been reported to be prodigiosins 11, a group of biologically active pigments synthesized by microorganisms that were first isolated from a terrestrial soil bacteria, Serratia marcescens 12. Prodigiosin is a low polar compound that is easily separated by chromatographic methods. This group of compounds is located at the top of the TLC sheet when eluted with a mixture of CHCl3 and methanol (9:1, v/v) 2. However, some strains of the genus Zooshikella have also been reported to produce other groups of compounds; for example, Z. kangwensis JC2044 produces oprenoid quinine 10. In the current study, strain S6.2 was found to contain prodigiosin and two derivatives as determined by LCMS/MS spectral data Fig. 4. Prodigiosins displayed high potential for antimicrobial activity against several pathogenic microorganisms, particularly S. aureus 11. 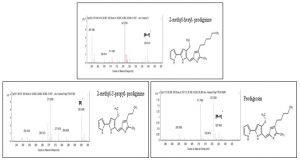 FIG. 4: ESI MS/MS DATA OF PRODIGIOSIN AND THEIR DERIVATIVES FROM THE EXTRACT OF Z. KANGWENSIS

In our work, crude extract of strain S6.2 showed moderate anti-MRSA activity, as determined by TLC-direct bioautography, MIC, and MBC. Ethyl acetate extraction of S6.2 revealed that the anti-MRSA metabolite was a low polar compound, indicated by the presence of inhibition zones located near the front line of the TLC sheet Fig. 5. 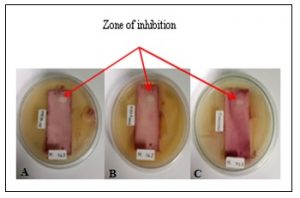 FIG. 5: TLC BIOAUTOGRAM OF THE EXTRACT FROM STRAIN S6.2

The MIC and MBC values of the extract were determined against S. aureus and clinically isolated MRSA. The MIC values ranged from 16.7–25.0 µg/ml Table 4, while the MBC values ranged from 33.33–50.0 µg/ml. These MIC values were higher than that of a progidiosin extract produced by Serratiasp., which hadan MIC value of 32 µg/ml 13. This may imply that the extract still contained a significant quantity of contaminating metabolites.

TABLE 4: MIC AND MBC OF THE EXTRACT FROM STRAIN S6.2 AGAINST PHOTOGENIC MICRO-ORGANISMS

CONCLUSION: In this study, preliminary screening for bioactive secondary metabolites from marine-associated microorganisms was performed. The isolated bacterium was identified as Z. kangwensis based on 16s rDNA and biochemical examination. From 20 L of bacterial culture, 500 mg of ethyl acetate extract was prepared. LCMS/MS spectral data showed that the extract contained progidiosin and two derivatives.

The anti-MRSA activity of the extract was determined by TLC-direct bioautography and the agar well diffusion method.

The results showed that the active constituent was a low polar compound, while the MIC and MBC values revealed moderate anti-MRSA activity.