ABSTRACT:  Metallic contaminants in the soil are hazardous and their accumulation in plants and water may be dangerous. Microorganisms have properties to adsorb, absorb and accumulate heavy metals. Moreover, they play the role of problem solver by resolving key problems associated with different kinds of metals. The study was undertaken to isolate and identify heavy metal resistant bacteria in soil around iron industries of Sonipat district in Haryana (India). Eight isolates were selected on the basis of heavy metal tolerance and antibiotic resistance in the secondary screening. Out of eight, one of the strain was authentically identified as Rhizobium halophytocola strain KT327204.1 (RT7) on the basis of morphological, biochemical, 16S rDNA gene sequencing and phylogeny analysis. The minimal inhibitory concentration (MIC) of isolate against Mn (7mM), Ni (1mM), Pb (3mM) and Fe (1mM) was determined in solid media. The identified isolate showed optimum growth at 37°C, 7.0pH and at NaCl concentration of 1% (w/v).

INTRODUCTION: Heavy metal is a prevalent pollutant in the soil, water and air. Metal plating, coal based waste, mining by product, chemical, industrial, nuclear and pesticide waste, mineral leaching and gasoline are considered as some of the major sources of these metals 1, 2, 3. Manganese is one metal which is hard to find as the free metal. On the contrary, it is present in over 100 minerals including various oxides, carbonates, sulphides, phosphates, silicates and borates 4, 5. Manganese naturally occur where water will remain in close contact with rock over a long period of time for instance deeper wells.

The metal exists in soil as an outcome of atmospheric deposition and mineral weathering originating from anthropogenic and natural sources 6, 7. In soil, oxidation states of manganese are found in three forms: Mn (II), Mn (III) and Mn (IV). Mn (II) is only form, which is found in stable form in the soil solution whereas the other two forms found stable in solid phase of soil 8. The metal mobility in soil is found to be very sensitive towards some of the soil conditions like wetness, acidity, biological activity 8, 9.   Lead is another such metal which is toxic in nature and is obtained from sources like printing, oil refineries, dyeing, etc. 90% of the pure manganese produced is consumed by the steel industry as an alloying constituent and deoxidizing and desulfurizing additive. It is also often alloyed with other metals such as aluminium and copper to reduce corrosion 4, 10, 11.

The common uses of Manganese dioxide is in the chemical manufacturing, leather and glass manufacturing in the leather and textile industry and in the production of dry-cell batteries. MnSO4 is applied as a fertilizer, livestock nutritional supplement, in glazes and varnishes, and in ceramics 10.  The metal is also used for the normal development of the body of mammals. Out of several functions performed by the metal, 20 identified functions are related with proteins and enzymes 12. Mn contributes to maintain healthy nerves and immune system and helps in blood sugar regulation 13, 14, 15. The toxicity of the metal has been reported over and over again through dietary and occupational (e.g. welder, miner) overexposure. It has been notified that its toxicity causes harm to the central nervous system, liver, heart, etc 15.

Relatively high doses of manganese affect DNA replication and causes mutations in microorganism and mammalian cells. In the case of mammalian cells, the metal exposure even leads to chromosome aberrations & DNA damage.  Large amounts of manganese affect fertility in mammals and are toxic to the embryo and foetus. The metal also affects fertility in mammals and causes harmful effect to foetus and embryo. It is due to this reason only pregnant women are advised to restrict their exposure to the metal at the work place 10.

Microorganisms are omnipresent and are found to be involved in one or other form in different biological processes of life. Owing to natural processes & urbanization, heavy metals are commonly found in microbial habitats in high proportions. Due to higher concentrations of metals, these organisms are forced to adjust themselves with different biological mechanisms so that they can cope with High heavy metal conditions 16. Many reports have revealed that indigenous microbes are capable of tolerating high metal concentrations in one way or another and may play a pivotal role in the restoration of contaminated soil 17, 18.

The present study aims to isolate and identify indigenous bacterial strains from heavy metal contaminated soil to determine their tolerance to manganese, iron, lead and nickel. The physiological and biochemical features were used to characterize the strains.

Direct Isolation of heavy metal resistant bacteria by plating: The soil samples were collected in and around iron industries of Sonipat district, Haryana, India. The samples were collected in sterile plastic container and transported to laboratory for bacteriological analysis. A 10-fold dilutions of fresh soil (1g) were made in distilled water and 0.1 ml from each of these dilutions was spread on triplicate NA (Hi Media, India) supplemented with each metal (.1mM) one time by the standard spread plate method. Plates were incubated at 37oC for 5 days. Colonies with different morphological appearance were selected from these culture plates and culture grow at a given concentration were subsequently transferred to the next concentration. Isolates were subcultured repeatedly on the same media for purification and stored in glycerol stock solution at -200C.

Determination of Morphological, Physiological and Biochemical characteristics: The shape and color of the colonies were examined under the microscope after Gram staining. The optimal growth conditions with reference to pH, temperature and salt tolerance were determined 21. Utilization of different carbon sources such as sugars, organic acids and amino acids were analysed using Hi 25TM Enterobacteriaceae Kit (Hi Media, India). Plates were prepared and inoculated according to Hi Media manufacturer's directions. Microplates were covered and incubated at 350C 22. Morphological and physiological tests were performed following the protocol given in Bergey's Manual of Determinative Bacteriology 23

Genomic DNA was isolated and was amplified by using the universal bacterial 16S rDNA primers, 27F(5'-AGAGTTTGATCATGGCTCAG-3') and 1492R (5'-TACGGCTACCTTGTTACGACTT-3'). PCR was performed with a 50 μl reaction mixture containing 1 μl  of DNA template, 0.5 μl of each primer at a concentration of 5mM, 5  μl MgCl2/ Buffer and 5 μl dNTP's at a concentration of 10mM, 0.5  μl of Taq polymerase. PCR was used to incubate reactions through an initial denaturation at 940C for 1min, annealing at 520C for 1min, extension at 720C for 1min and final extension at 720C for 5min. PCR was carried out in a Thermal cycler (BioRad, India). PCR products were analyzed by 0.8% (w/v) agarose gel electrophoresis in 1XTAE buffer with ethidium bromide (0.5μg/ml).

The PCR products with size of about 1.5 Kb were pooled and purified using PCR-DNA & Gel Band Purification Kit (GE Health Care, India) according to the manufacturer's instructions. Concentration of purified PCR product was determined by using Nanodrop Spectrophotometer (Thermo Fisher Scientific Inc., India).  The 16S-DNA was sent for sequencing (BioLinkk, India). Sequences were matched with previously published bacterial 16SrDNA sequences in the NCBI databases using BLAST (http://www.ncbi.nlm.gov/BLAST). Based on the scoring index the most similar sequences were aligned by using Clustal X software. Further phylogenetic tree was built. 16S rDNA sequences have been deposited in Gen Bank.

Isolation by plating: After incubation at 370C for 3-5 days, colonies formed on each plate. The images of colonies of bacterial strain RT7, on plates have been shown in Fig. 1. The shape of the colonies was circular with white color and smooth surface. They could grow well on solid medium supplemented with manganese up to the maximum 7 mM concentration after being incubated for 48 hours. It also tolerated lead, nickel and iron up to 3, 1 and 1 mM respectively on solid medium as shown in Table 1.

Morphological, Physiological and Biochemical characteristics: The morphological, physiological and biochemical characteristics of strain RT7 are shown in Table 2. RT7 is a gram –ve bacterium and rod in shape. The strain had a wide growth temperature ranging from 200-400C and the optimal growth temperature was 370C; the pH range was from 6-9 and the optimal pH was found 7; NaCl tolerance was upto 2%. RT7 was susceptible to following antibiotics: Chloramphenicol, Neomycin, Ciprofloxacin, Amoxicillin, Ampicillin, Chlorotetracycline, Ceftazimide.

The 16S rDNA of bacterial strain RT7 was amplified with primers 27F and 1492R. The PCR amplification products were detected by 0.8% agarose gel electrophoresis in ultraviolet (UV) light. The length of fragment is about 1.5 Kb/1500 bp with a concentration of 38.1 ng/ul (P-1.37) of purified PCR product. Comparative analysis of the sequences with already available database showed that the strain was closer to the genus Rhizobium species. The highest sequence similarity of soil bacteria RT7 was with Rhizobium halophytocola (97% similarity to Rhizobium halophytocola YC6881). Phylogeny based on Clustal X clearly indicates that RT7 is a strain of Rhizobium halophytocola. The 16S rDNA sequences were submitted in the GenBank under the accession number KT327204.1. Constructed phylogenetic tree has been presented in Fig. 2. 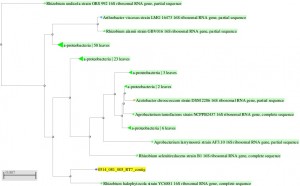 In the present study, bacterial strain RT7 has shown resistance against toxic metal manganese up to 7 mM isolated from Industrial soil which was identified by morphological, biochemical and 16S rDNA sequence analysis as Rhizobium halophytocola.  RT7 has shown multiple tolerance to other heavy metals. In contrast, Mn resistance was observed only up to 6 mM by Bacillus circulans which was studied against MnSO4 24. In this study, soil bacteria was resistant to Pb up to the maximum concentration of 3 mM in Nutrient medium. On the contrary, isolates were resistant against Pb at the concentration of 0.6 mM and 2.5 mM respectively in minimal medium 25. Similarly other bacterial strains were resistant to Pb and Cd with MIC 2 mM and 0.5 mM respectively 26.

In most of the studies, it has been found that the metal resistance and antibiotic resistance 27 are closely assoicated. RT7 was found resistant to Kanamycin which can be used as an important tool for genetic engineering. RT7 has shown growth at temperature ranging from 20ºC to 40ºC, on media incorporated upto 2% salt concentration and at pH ranging from 6 to 9. They could be used for bioremediation at different contaminated sites having different temperature, salinity and pH ranges. Their physiological as well as biochemical

characteristics were examined. The utilization of various carbon sources by bacteria was also analyzed which showed their diversity of metabolic patterns.

CONCLUSION: In our study, strain RT7 isolated from the long term heavy metal polluted site near an Iron industry could be considered as "metallophile" as it was found tolerant to heavy metal concentrations well beyond the minimal inhibitory concentration of E.coli based model 28, 29. RT7 has shown multiple tolerance to heavy metals. Bacteria developed various resistance mechanisms when they were exposed to environment containing heavy metals especially manganese. This property of multiple heavy metal resistance of RT7 can be beneficial for detoxification and removal of heavy metals from polluted environment.

ACKNOWLEDGEMENT: The authors are grateful to Director of UIET, Kurukshetra University, Kurukshetra, India, for providing instruments and facilities for this research. We would like to thank Council of Scientific and Industrial Research (CSIR), India for their financial support.