General phytochemical screening of the aqueous extract of fruits of Solanum xanthocarpum (Solanaceae) revealed the presence of steroids, terpenes, phenolic compounds, saponins, fatty acids, alkaloids. Fractionation of aqueous  extract  and activity guided  isolation  resulted in isolation of two white crystalline powder which were subjected to physical, chemical and spectral identification using IR, 1H‐NMR, 13C‐NMR and LC‐MS. On the basis of the spectral data analysis and chemical reactions, the compounds have been established as β-sitosterol and Stigmasterol.

INTRODUCTION:Solanum xanthocarpum belonging to family Solanaceae commonly known as Indian night shade or yellow berried night shade is a perennial herbaceous weed. Different parts of this plant have been used traditionally for curing various ailments such as fever, cough, asthma and diabetes in Indian traditional medicines 1. The hot aqueous extract of dried fruits is used for treating cough, fever and heart diseases 2. The plant is extensively studied for the various pharmacological activities like antiasthmatic 3, hepatoprotective 4, cardiovascular 5, hypoglycemic 6,antiulcer 7 and other properties.

To prove traditional claim of this plant preliminary immunomodulatory evaluation of aqueous extract of fruits of Solanum xanthocarpum on cyclophosphamide induced immunosuppression was carried out and the results indicated good protection by showing increase in all the hematological parameters 10.  In continuation of the work, it was proposed to isolate active immunomodulating agents from the extract. The fruits are reported to contain several steroidal alkaloids like solanacarpine 11, solanacarpidine, solancarpine, solasodine, solasonine 12 and solamargine 13. Other constituents like caffeic acid 14 coumarins like aesculetin and aesculin 15, steroids carpesterol, diosgenin, campesterol, daucosterol and triterpenes like cycloartanol and cycloartenol are also reported from the fruits 16.

In this paper, we report the isolation and characterization of bioactive principles namely β-sitosterol and stigmasterol from aqueous extracts of fruits of Solanum xanthocarpum.

Plant material. Fruits of the plant, Solanum xanthocarpum were collected from APRC Lab Chennai and authentication no APRC/78/22/08-09. The sample was shade dried and powdered to #22.

Extraction: Powdered plant material was defatted with petroleum ether (60-80oC) in a soxhelet extractor. The marc was dried and refluxed with water for 8 hrs. The aqueous extract was filtered and concentrated using rotary vacuum evaporator and the dried extract was stored in an air tight container.

Isolation: Column chromatography of fruit aqueous extract (10g) was conducted using silica gel (Mesh 100-200) by wet packing method. The column was run using petroleum ether, ethyl acetate, methanol and water successive by gradient elution technique. TLC was used to monitor the eluates. A total of 200 eluates were collected. Similar fractions were pooled together to yield fifteen fractions. Eluates A, and G were worked upon to yield Sx5, and Sx9 respectively.

Sx9 a white crystalline powder (9mg) with a melting point (137oC) was subjected to TLC using various solvent systems such as petroleum ether: chloroform: methanol (5:3:1), methylene chloride: petroleum ether (50:50) indicated it to be homogenous compound. Sx9 was further subjected to 1HNMR, 13CNMR and LCMS to ascertain the chemical structure.

The structures were simulated using ACD/NMR program to obtain the chemical shifts of both proton and carbon.

Phytochemical analysis (Salkowski’s test and Lieberman-Burchard test) of both the compounds confirms its steroidal nature.

Spectroscopic Characterization: Different spectro-scopic methods were used to elucidate the structure of isolated compounds. Among the spectroscopic techniques IR, 1H‐NMR, 13C‐NMR and LCMS were carried out. The infra red spectrum was recorded on FTIR (model Shimadzu 8700), 1H‐NMR and 13C‐NMR spectra were recorded using CDCl3 as solvent on Bruker Advance II 400 NMR spectrometer and LCMS spectra were recorded at high resolution on a mass spectrometer (model Shimadzu) at Sophisticated Instrumentation centre and the data are given in m/z values.

Characterization of Sx5 and Sx9: The exact molecular mass for the Sx5 and Sx9 was found to be 414.7 and 412 respectively.  Based on this the proposed molecular formula of the compounds could be tentatively: C29H50O and C29H48O. From 13CNMR and 1HNMR the number of C and H were found to be near to the formula C29H50O and C29H48O. Since, the compounds give positive test for steroids so all of the other structures other than steroids were rejected.

Based upon the functional group analysis it was found that the nature of oxygen was hydroxyl, also supported by IR spectroscopy. This implies presence of one double bond in the structure. So, the steroids with other functional groups were rejected. Also on considering the nature of oxygen as hydroxyl and presence of one double bond, the general formula for the compounds were CnH2n-6.

Therefore, they must be tetracyclic compounds. Based on the melting point and other related data (IR, NMR and Mass) the structure of the isolated compounds Sx5 and Sx9 were proposed as (fig. 1); 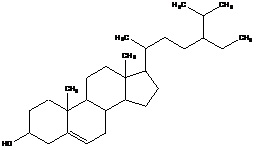 This compound is having six methyl, eleven methylene and three quaternary carbons with a hydroxyl group. The carbons of alkenes conjugated are at 140.78 ppm (C5) and 121.72 ppm (C6) which was confirmed from the 13CNMR.  The above IR, 1HNMR, 13CNMR, LCMS spectal data and a comparison of the 13CNMR signal with those described in the literatures 18-20 showed the structure of Sx5 to be the β-Sitosterol.

The structures were simulated using ACD/NMR program to obtain the chemical shifts of both proton and carbon. On comparison the experimental data matched with the simulated data which supports the proposed structure of this compound.

The extract potentiatedthe non- specific immune response by increasing the haematological parameter and neutrophil adhesion test, which may attributed to different phytoconstituents. Hence, to isolate the phytoconstituent it was subjected to fractionation and characterizations of isolated compounds.

Two compounds Sx5 and Sx9 showing positive tests for steroids and alcohols were isolated. The Sx5 is white amorphous powder like substance with melting point 137oC. Whereas, the Sx9 is white crystalline substance with melting point 139oC on subjection to IR spectroscopic analysis, the observed absorption frequencies resemble the absorption frequencies observed for β- sitosterol and Stigmasterol. The proton NMR showed the proton environment resembles the protons of β- sitosterol and Stigmasterol.

The 13C‐NMR has shown recognizable signals of β sitosterol and Stigmasterol.

The weak molecular ions were given at m/z 414 and 412.7. The molecular weight and fragmentation pattern indicate that the isolated compounds are β-sitosterol and stigmasterol.

The above I.R., 1HNMR, 13C‐NMR and LCMS spectral data and their comparison with those described in the literatures showed the structure of isolated compounds are to be the β-sitosterol   and stigmasterol 24.

CONCLUSION: β- sitosterol and Stigmasterol isolated from the aqueous extract of fruits of Solanum xanthocarpum these compounds may be the responsible for immunomodulatory activity.

ACKNOWLEDGEMENT: Authors are thankful to the Principal and Manager of Al-Ameen College of Pharmacy for providing the necessary facility to carry out the research work. One of the authors, Rokeya Sultana is thankful to IPA, for providing financial support.