ABSTRACT
Jatropha curcas L. and P. pinnata Pierre is gaining importance as bio-diesel crop in India. Jatropha curcas L. a member of the family Euphorbiacea and Pongamia pinnata, a member of the family Leguminoseae. A study was conducted to identify common arbuscular mycorrhizal fungi present in its rhizosphere from different regions of India viz., Jodhpur (Rajasthan), Hissar (Haryana), Jhansi and Lalitpur (Uttar Pradesh) and Hyderabad (Andhra Pradesh). The results showed that different AM fungal species were present at different locations. A total of five Acaulospora AM species were recorded in different location of India. The highest frequency of occurrence was recorded for Acaulospora scrobiculata Trappe (100%), minimum frequency of occurrence was observed in A. mellea in J. curcas. The highest frequency of occurrence was recorded for Acaulospora scrobiculata Trappe (75%), Moderates frequency of occurrence was observed in A. mellea in P. pinnata. Maximum species richness was recorded at Jodhpur, followed by Jodhpur, Hissar, Hydrabad, Jhansi, Lalitpur, and Pantnagar. Isolation of five species of Acaulospora species (A. dilatata (Morton), A. denticulata (Sieverding & Toro), A. Longula (Spain & Schenck), A. mellea (Spain & Schenck), and Spores formed singly in the soil, borne or in sporocarps, spores are globose and subglobose, borne laterally on subtending hypha of large, terminal, relatively thin walled, sporogenous saccule. Spore composed to essentially two distinct, separable wall groups: at least part of outer is continuous with wall of subtending stalk, may be pigmented, laminated or composed distinct wall, and variously ornamented; inner is composed of one or more walls that are usually membranous, hyaline, may be laminated, ornamented, and stain pink, red, or purple in Melzer’s-reagent

INTRODUCTION: India has 146 m ha of wasteland (NBSSLUP, 04) of which 33 m ha can be reclaimed for plantation of the bio-diesel plants, in addition to arable land that is being used for the plantation. Jatropha curcas L a member of the family Euphorbiaceac and Pongamia pinnata Pierre members of the family leguminosae are gaining importance as bio-diesel plants. AM fungi form symbiotic association with most economically important plants. These fungi improve plant growth under low fertility conditions, confer tolerance against certain plant pathogens, improve water balance of the plants, contribute to the formation of soil structure and help plants to establish in new areas (Panwar and Vyas 2002). In J. curcas and P. pinnata a very few references are available. The role of arbuscular mycorrhizal (AM) fungi in enhancing plant growth and yield, resistance to drought and salinity and tolerance to pathogens is well documented (Smith and Gianinazzi-Pearson, 1988). However, wide diversity exists within the group of fungi responsible for the formation of AM by most plants in the majority of terrestrial ecosystems. The selection of the most specific appropriate plants fungus association for each specific environmental and ecological situation is one of the main challenges in current research on AM.

Sampling: The sampling was done during June 2007- 2008 and 10 samples were taken per tree species from each location. Using different soil samples set trap cultures. The soil collected from field was mixed in 1:1 ratio (v/v) with autoclaved coarse sand. The mixture was transferred to 15 cm plastic pots, which were seeded with Zea mays L. (maize) and Phaseolus mungo L. (black-gram) and were maintained in green house. After 4-5 months, spore/ sporocarps were isolated from the substrate taken from the trap cultures according to the method of Geredmann and Nicolson (1963). Taxonomic identification of spores was matched with the description provided by the International Collection of Vesicular Arbuscular Mycorrhizal Fungi (INVAM, 2006). Characteristics of unidentified species are presented in table 2. Species richness and frequency of occurrence (%) of AM fungi associated with different studied plant species were also calculated (Khade and Rodrigues 2008). 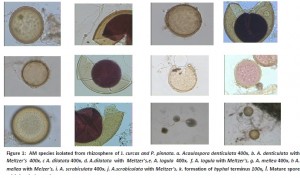 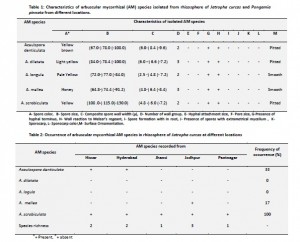 ACKNOWLEDGEMENTS: The authors are thankful to Director, National Research Centre for Agroforestry, Jhansi for providing the facilities, and financial support from University Grant commission New Delhi for Post Doctoral Fellowship.