ABSTRACT: The uses of plant medicines are very common in Asia and developing countries. Phytochemicals has been used to treat chronic as well as infectious diseases. Cardiospermum halicacabum Linn. (Sapindaceae) is an herbaceous climber, commonly found throughout India, used as vegetable as well as traditional medicine for rheumatism, lumbago and nervous diseases. Many pharmacological studies have been done with various parts of C. halicacabum plant to demonstrate its medicinal effect. The present work was aimed to isolate the active compounds from the leaf extract of C. halicacabum. The hydro alcoholic leaf extract (80% methanol + 20% distilled water) was subjected to isolation procedures for identification of active compounds. Eleven compounds were got and in vitro anti oxidant analysis were done with the isolated compounds.Compound 1 and 8 selected for structural elucidation. The NMR spectrum showed characteristic peaks of compound 1 and 8 and the active phytoconstituents were identified as Kaempferol- 3- o- α- l- rhamnoside and Apigenin – 7- o- β – d- glucuronide by structural elucidation. The isolated compounds showed strong antioxidant potential.

INTRODUCTION:  The uses of natural drugs are very common in Asia and developing countries. According to World Health Organization (WHO) more than 80% of the world’s population relies on traditional medicine due to their efficiency or due to the costs or side effects of synthetic drugs. Plant medicines have been used to treat chronic as well as infectious diseases1.  Natural products, such as plant extracts either as pure compounds or as standardized extracts, provide unlimited opportunities for new drug discoveries.

Many beneficial biological activity such as anticancer, antimicrobial, antioxidant, antidiarrheal, analgesic2-6 and wound healing activity were reported. So efficient detection and rapid characterization of natural products play an important role in the phytochemical investigation of crude plant extracts and its therapeutic uses.

Fresh leaves of C. halicacabum was collected from the tropical areas of Mallur Taluk, Salem district, Tamilnadu, India, and thoroughly washed in water, dried at room temperature, and powdered.  Dry fine powder was suspended in Hydro alcoholic solvent (80% methanol + 20% distilled water) for cold maceration for 4 days. The extract was filtered using a muslin cloth and concentrated at 40 ± 5 ºC.

The crude Hydro alcoholic extracts of the leaves of C. halicacabum was subjected to chemical tests for its active constituents according to the Harborne method 16.

25g of silica gel was suspended in 50mL of deionised water and thickened slurry was poured into the glass plates for thickness 1mm and allowed to air dry for 30minutes at 50oC (until they turn white). Then few drops of the hydro alcoholic extract were applied to the bottom of each of the glass plates. After 5 minutes of drying, each plate was placed in the separate glass chamber with solvent system Chloroform: methanol (9:1 v/v) as the mobile phase. The different solvent systems were tried as mobile phase, of which chloroform: methanol (9:1) gave clearly visible spots hence tried with that mobile phase.

The extract residue (10 g) was applied onto a silica gel column (200 g, 100cm x 3.5 cm), to isolate the active compound from the crude extracts using hexane as a solvent and the polarity was increased by CHCl3 then MeOH and fractions (100 mL) each were collected. The obtained fractions were concentrated and monitored by TLC using hexane, chloroform and methanol (97:2:1%) as mobile phase.

The collected fractions were concentrated using a Rotavapour. TLC was used to analyze the active compound, and those with similar chemical components were pooled together. The pure compound was dried in pre-weighed pill vial and its mass (g/ml) determined.

The TLC plates were used to observe the separation of individual compounds as a single spot were trimmed and the position of the origin marked by a straight line. The column fractions of sample was spotted on the origin and put in a lidded tank containing a solvent system. The procedure was followed for other plates with various solvent-solvent ratios (chloroform: methanol in the ratio 6:4, 7:3, 5.5:4.5 and 4:6) until good resolution was noticed. The level of solvent in the tank was about 1cm beneath the origin. The solvent travelled up the plate by capillary action till it reached the solvent front (also marked by a straight line across). The lid was lifted off and the plate is dried before it was viewed by spraying with silver nitrate and iodine vapor and visualized under UV light to identify and confirm the compounds eluted through column chromatography.

The total antioxidant capacity was determined by phosphormolybdenum method22 and is based on the reduction of Mo (VI) to Mo (V) by the antioxidant compounds and the formation of a green Mo (V) complex which has the maximal absorption at 695nm. An aliquot of 0.1ml of the sample solution containing a reducing species in DMSO was combined in an eppendorff tube with 1ml of reagent solution (0.6M Sulphuric acid, 28mM sodium phosphate, and 4mM ammonium molybdate). The tubes were capped and incubated in water bath at 95°C for 90min. The samples were cooled to room temperature, and the absorbance of each solution was measured at 695nm. The total antioxidant capacity was expressed as mM equivalent of ascorbic acid23.

A method developed by Oyaizu24, 1986 for reducing power test was used. The above sample including the compounds together with Ascorbic acid solutions were spiked with 2.5ml of phosphate buffer (0.2 M, pH 6.6) and 2.5ml of 1% potassium ferricyanide. The mixture was then kept in a 50°C water-bath for 20min. The resulting solution was then cooled rapidly, spiked with 2.5ml of 10% trichloroacetic acid, and centrifuged at 3000rpm for 10 min. The supernatant (5ml) was then mixed with 5ml of distilled water and 1ml of 0.1% ferric chloride. The absorbance at 700nm was then detected after reaction for 10min. The higher the absorbance represents the stronger the reducing power. The reducing power assay was expressed in terms of Ascorbic acid equivalent per gram of dry weight basis.

The DPPH free radical is reduced to a corresponding hydrazine when it reacts with hydrogen donors25. The DPPH radical is purple in colour and upon reaction with hydrogen donor changes to yellow colour. It is a discoloration assay, which is evaluated by the addition of the antioxidant to a DPPH solution in ethanol or methanol and the decrease in absorbance was measured at 490nm. The assay was carried out in a 96 well microtitre plate. To 200ml of DPPH solution, 10ml of each of the test sample or the standard solution was added separately in wells of the microtitre plate. The final concentration of the test and standard solutions used were 1000, 500, 125 and 31.25 mg/ml. The plates were incubated at 37oC for 30 min and the absorbance of each solution was measured at 490 nm, using a microplate reader.

Qualitative phytochemical analysis of Hydro alcoholic extract of C.halicacabum showed the presence of bioactive phytochemicals like alkaloids, tannins, flavonoids and terpenoids. Further in bioassay guided isolation eleven compounds were isolated and all the compounds were subjected to antioxidant assays. Graph 1, 2 and 3 shows the results of total antioxidant capacity assay, reducing power assay and DPPH assay. It was clearly observed that compound 1, 6 and 8 possess maximum antioxidant capacity and minimum IC50 value. Compound 1 and 8 were selected for structural elucidation. NMR technique was employed in the identification of structure of compounds. Graph 4 & 5 shows the NMR results of compound 1 (Kaempferol- 3- 0- α- I- rhamnoside, Figure: 1) and 8 (Apigenin-7- o- β- d- glucuronide, Figure: 2). 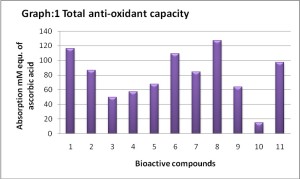 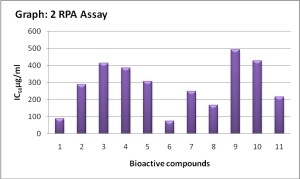 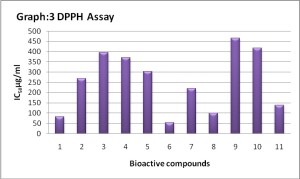 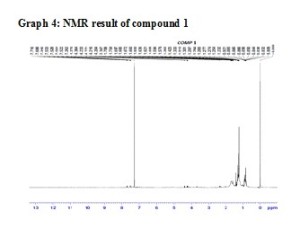 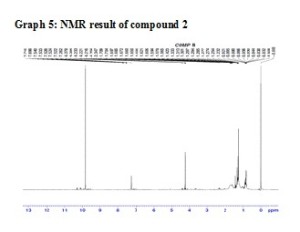 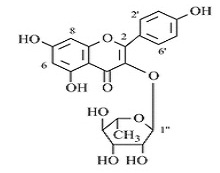 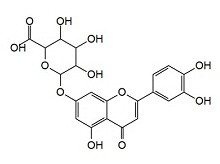 Kaempferol from Bryophyllum pinnatum and Apigenin from Premna cordifolia were shown to possess antioxidant activity26 and many other studies showing evidence for the same 27,28  which supports the current study.

CONCLUSION: In conclusion, in this study we isolated the active compounds form C. halicacabum leaf and characterized the same. Since plants contain thousands of constituents with considerably different biological properties any successful investigation of biological material lies in the ability to have as large a number of biological screens as possible and can be effectively used as an excipient in pharmaceutical formulations. Kaempferol- 3- o- α- l- rhamnoside and Apigenin – 7-o-β-d- glucuronide showed strong antioxidant activity. Further, both in-vivo and in-vitro anti diabetic effect study of these compounds are in progress.