In continuing search for compounds with immunomodulatory activity, plant Aralia cachemirica has been found to contain continentalic acid (CA). Isolation of this pharmacologically significant diterpinic acid from Aralia cachemirica is novel. Chemical structure of this compound was identified by spectral analysis as (-)-pimara-8(14), 15-dien-19-oic acid, which has been isolated from A. cordata and A. continentalis. This compound has been evaluated for its effect on immunomodulaion. CA was found to inhibit production of pro-inflammatory cytokines (IL-6, TNF-α) & nitric oxide (NO) in LPS induced macrophage activation, suppressed antibody titres & delayed type hypersensitivity reaction (DTH) when orally administered and increased the phagocytic activity by clearance of Candida albican infection from peritoneal cavity in mouse model system.

INTRODUCTION: Immunomodulaion refers to any change in immune response of body involving induction, expression, amplification, or suppression. In some cases we require stimulation of immune response, whereas suppression of immune response is needed in other conditions. Immunosuppressors are required for the treatment of autoimmune diseases and allergies, and in case of organ/tissue transplantation to prevent graft rejection.

Conversely, immunostimulators are known to enhance body’s resistance against a number of infections, allergies and cancers serving as immune potentiators in healthy persons and immunotherapeutic agents in case of persons with impaired immunity. Many synthetic and natural compounds are known to possess immunomodulatory activity, but limited efficacy and adverse side effects associated with traditional immunomodulatory drugs drive need to develop new, improved, and target specific immunomodulating agents. According to phylogenic and biogeographic analysis, approximately sixty eight accepted species of genus Aralia (Family Araliaceae) are distributed in Asia and North America 1-3. Several species of genus Aralia have pharmacological importance 4-8 and have been used in traditional medicine to treat rheumatic arthritis, nephritis, lumbago, lameness 9-11, gastritis 12 inflammation 13 and diabetes mellitus 14.

Herein, we report isolation of continentalic acid (CA) from Aralia cachemirica and evaluation of its effect on immunomodulaion by observing its effect on antibody titres, delayed type hypersensitivity reaction (DTH), splenocyte proliferation and nitric oxide & pro-inflammatory cytokines (IL-6 and TNF-α) production from macrophages.

Plant material: The aerial parts of plant Aralia Cachemirica were collected from khillanmarg area of Kashmir (J&K), India after proper identification and authentication of plant by department of Bioscience and Biotechnology, Banasthali Vidyapeeth, Rajasthan, India, in the month of May 2008 (no. BV 168).

Extraction and Isolation: Crushed and air-dried leaves, stems and twigs (680gms) of Aralia cachemirica were extracted with methanol through percolator for 72 hours. The suspension was filtered and the filtrate was concentrated under reduced pressure to yield 87.95 gm of dry methanol extract. The extract was chromatographed on silica gel column eluting with n-hexane- ethyl acetate gradient. Fractions of similar composition as determined by TLC analysis were pooled. Further purification of these fractions on silica gel column with the same elution solvent and crystallization in hexane yielded pure colorless needles of (-)-pimara-8(14), 15-dien-19-oic acid (360 mg).

Preparation of Test Material: For in vivo studies in Balb/c mice, CA was suspended in 1% (w/v) gum acacia, while for in vitro studies a stock solution of test materials in 10% dimethylsulphoxide was prepared. In the cell culture supernatant <0.1%did not interfere with the test system.

Experimental Animals: The study was conducted on male Balb/c mice (18-22 g). The ethical committee of the Indian Institute of Integrative Medicine, Jammu (CSIR, India) instituted for animal handling approved all the protocols. The animals were bred and maintained under standard laboratory conditions: temperature (25±2°C) and a photoperiod of 12 h. Commercial pellet diet and water were given ad libitum.

Anti-SRBC Antibody Titre: Mice were immunized by injecting 0.2 ml of 10% of fresh SRBC suspension intra peritoneally on day 0. Blood samples were collected in micro centrifuge tubes from individual animals by retro-orbital plexus on day 7 for primary antibody titre and day 14 for secondary antibody titre. Serum was separated and antibody levels were determined by the haemagglutination technique 26. Briefly, equal volumes of individual serum samples of each group were pooled. Two fold dilutions of pooled serum samples were made in 25μL volumes of normal saline in a micro titration plate to which were added 25μL of 1% suspension of SRBC in saline. After mixing, the plates were incubated at room temperature for 1 h and examined for haemagglutination under the microscope. The reciprocal of the highest dilution of the test serum giving agglutination was taken as the antibody titre.

Delayed Type Hypersensitivity (DTH): CA was administered 2 h after SRBC injection and once daily on consecutive days; six days later, the thickness of the left hind footpad was measured with a spheromicrometer (pitch, 0.01 mm) and was considered as the control. The mice were then challenged by injecting 20 µL of 5 ± 109 SRBC/mL intradermally into the left hind footpad. The foot thickness was measured again after 24 and 48 h 27.

Spleenocyte Proliferation Assay: Spleen collected under aseptic conditions in HBSS, was minced using a pair of scissors and passed through a fine steel mesh to obtain a homogeneous cell suspension and the erythrocytes were lysed with ammonium chloride (0.8%, w/v). After centrifugation (380 × g at 4°C for 10 min), the pelleted cells were washed three times with PBS and resuspended in complete medium [RPMI 1640 supplemented with 12 mM HEPES (pH 7.1), 0.05 mM 2-mercaptoethanol, 100 IU/mL penicillin, 100 μg/mL streptomycin and 10% FCS].

The cell number was counted with a haemocytometer by the trypan blue dye exclusion technique 28. Cell viability exceeded 95%. To evaluate the effect of CA on the proliferation of splenic lymphocytes, the spleen cell suspension (1×107 cell/mL) was pipetted into 96-well plates (200 µL/well) and cultured at 37 °C for 72 h in a humid saturated atmosphere containing 5% CO2 in the presence of Con-A (5μg/mL) and LPS (10μg/mL). After 72 h, 20 µL of MTT solution (5mg/ mL) was added to each well and incubated for 4 h. The plates were centrifuged (1400 × g, 5 min) and the untransformed MTT was removed carefully by pipetting. To each well, 100µL of a DMSO working solution (192µL DMSO with 8µL 1 M HCl) was added and the absorbance was evaluated in an ELISA reader at 570 nm after 15 min.

Collection of Peritoneal Macrophages, Nitrite and Cytokines Assay: A volume of 10 ml of RPMI 1640 was injected into the peritoneal cavity of challenged       mice on day 28. After 5 min, the medium was taken out and centrifuged at 1800 ×g for 10 min. at 40C. The cell pellet was re suspended in RPMI 1640 medium. Macrophages (3 ×106) were seeded in 24-well culture plate in a CO2 incubator for 3 hrs.

At the end of incubation period, non-adherent cells were removed and plates were further incubated for 48 h in the presence of LPS (1µg/ml). Supernatants were collected after centrifugation and kept at -800C for the measurement of cytokines.  For the NO2- assay (nitrite content), 100µl of culture media was incubated with 150µl of Griess reagent (1% sulfanilamide, 0.1% naphthylethylenediamine in 2.5% phosphoric acid solution) at room temperature for 10 min in 96-well micro plate 29.

Cytokine Production from Macrophages: Measurement of cytokines (IL-6 and TNF-α) was carried out using commercial kits (BD OptEIA set) as per the manufacturer’s instructions. 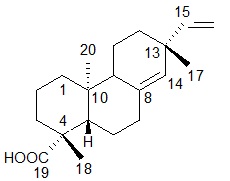 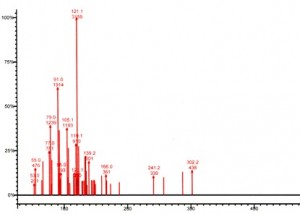 Measurement of Anti-SRBC Antibody Titre: Anti-SRBC antibody (IgM and IgG) titres were measured in mice serum of different groups, collected retro-orbitally on 7 and 14 days after immunization and treatment. Results given in Table 1 indicate that CA (25–100 mg/kg, p.o.) produced a dose-related inhibition in the primary and secondary antibody synthesis. The maximum inhibition was observed at 100 mg/kg in the primary and secondary antibody titre. Administration of BMS (0.05 mg/kg, p.o.) used as a positive control resulted in a significant decrease in the humoral antibody titre compared with the control animals (Table 1).

Measurement of DTH reaction: DTH reaction to SRBC is given in Table 1 in which data are expressed in terms of the swelling of the footpad. After administration of the CA (25-100 mg/kg, p.o.), a significant dose related decrease in footpad thickness was found at 24 and 48 h as compared with the control group.

Effect of CA on spleenocyte proliferation: To confirm the effect of the CA on the cellular immune response, the proliferation of spleenocytes in response to Con A (5 μg/mL) and LPS (10 μg/mL) was evaluated. The results   indicated that the proliferation in CA treated groups at 25, 50 and 100 mg/kg was suppressed in a dose-dependent manner compared with the control group, maximum inhibition observed at 100 mg/kg (Figure 3).

Effect of CA on nitrite level: The effect of CA (25, 50 and 100 mg/kg) on nitric oxide production is shown in Figure 4. The nitrite concentration was determined by extrapolation from a sodium nitrite standard curve and the results are expressed in μM. The maximum inhibition in nitrite production was observed at 100 mg/kg compared with the control group. Increasing doses of CA registered a significant decrease in the production of nitrite content. 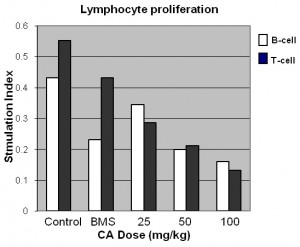 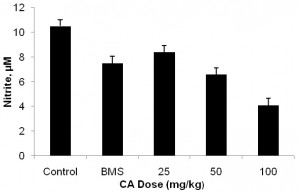 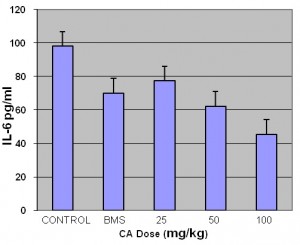 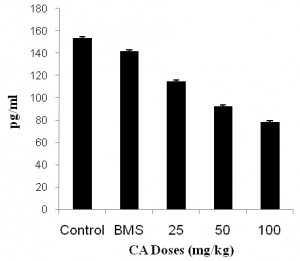 CONCLUSION: The aim of our study was to evaluate immunomodulatory effect of continentalic acid (CA) isolated from plant Aralia cachemirica. The results mentioned above have demonstrated that CA possesses a potent immunosuppressive action. The inhibition of the humoral response against SRBCs in Balb/c mice by CA was evidenced by the decrease in HA titre. A DTH reaction is an expression of cell-mediated immunity and plays a role in many inflammatory disorders.

Treatment with CA inhibited the DTH reaction, as reflected by the decreased footpad thickness compared to the control group. In our present investigation, we found that CA could inhibit Con-A and LPS induced spleenocyte proliferation, indicating its role in inhibiting T-cell activation. In further studies, CA was found to interfere with macrophage activation induced with LPS. This finding indicates that CA inhibits LPS induced macrophage activation by inhibiting the pro-inflammatory cytokines release.

In view of the pivotal role played by macrophages in coordinating the processing and presentation of antigen to B-cells, CA was evaluated for its effect on NO production from macrophages. In this study, we found that CA could significantly inhibit the NO and pro-inflammatory cytokines (IL-6 and TNF-α) production from macrophages. These findings open new insights into immunosuppressive potential of continentalic acid for future use in immunotherapy.

ACKNOWLEDGMENTS: Authors are thankful to Dr. R. K. Khajuria and Mr. Rajneesh Anand, Instrumentation division, IIIM, Jammu for their support in instrumental analysis and one author (B. S. Arora) is grateful to UGC, India for fellowship.