ABSTRACT: Objectives: The study aimed to isolate coumarin compound from Bauhinia purpurea bark. Method: The bark was extracted successively with methanol in a soxhlet apparatus. The crude mass was subjected to HPLC, as well as column chromatography and eluted with methylene dichloride – methanol system with increasing methanol ratio to isolate compound BP. The structure of compound BP was identified by various spectrophotometric techniques (UV, IR, 1HNMR, 13CNMR and Mass Spectrometry). Key Findings: Compound BP was obtained as a white crystalline solid with melting point 197oC. It responded positively to the test of flavonoids. It showed λmax at 256 and 356 nm, IR bands at 3258.93, 1343.97, 1655.57, 1165, 1198.52 cm-1, NMR spectra confirmed the presence of phenolic OH and coumarin ring and [ESI-MS] m/z 462.9 [M+- 1]. Conclusion: Concluding from the interpretations of all the spectra, the compound BP was identified as 3, 5, 7- trihydroxy – 2 – (3, 4, 5- trihydroxy phenyl) – 4H-1 – benzopyran – 4- one. This compound had been found worthy for pharmacological considerations.

Introduction: Bauhinia purpurea Linn. lies in the family Caesalpiniaceae and is locally  known as Butterfly tree. It is a medium sized deciduous tree sparingly grown in India.1 The purple colored flowers of the species distinguish it specifically from other species of Bauhinia. It is cultivated in gardens throughout India. It is raised from seeds and the seedlings and then transplanted. It can be raised at sites by line sowing. 2

It is a medicinal plant traditionally used for varied purposes. Leaves are used as a plate for food and fodder during lean period, 3 bark used as fibre, in dyeing and tannin extraction and its decoction is used as an astringent and diarrhoea. It is also recommended in ulcer as an ulcer wash. The decoction of root is used for expelling gases, flatulence and gripping pain from the stomach and bowels. The decoction of flower works as a maturant for boils and abscesses. 2, 4, 5

A number of Bauhinia species have been investigated as a source of potential bioactive compounds such as flavonoids, glycosides, alkaloids, and phytosterols demonstrating antidiabetic, antimicrobial, analgesic and antioxidant activities.  Generally, flavonoids have been explored as the chemotaxonomic markers for Bauhinia species. Flavonoids are polyphenolic compounds, widely distributed in the plant kingdom.

They are reported to exhibit various pharmacological activities, such as CNS activity, anti oxidant activity, lipid lowering activity, hypoglycemic activity and so on. These active constituents and the above mentioned activities in turn appear to correlate with some other biological activities. 6 One of the earlier studies identified 3, 4-dihydroxychalcone-4-O-β- L- arabinopyranosyl-O-β-D-galactopyranoside from B. purpurea seeds.7

The methanolic extract (2 g/kg) of B. racemosa flowers in gastric ulcer model induced by acetylsalicylic acid in rats have shown that this extract significantly reduced the ulcer index.8 A study of the methanolic extract obtained from B. purpurea wood led to the isolation and identification of 6-butyl-3-hydroxyflavanone9. 5, 6-dihydroxy - 7- methoxyflavone – 6 – O – α - D xilopyranoside was isolated from the chloroform fraction of the total ethanolic extract of B. Purpurea bark.10

The documented   use and potential of Bauhinia species to act as hypoglycemic agents have begun to receive much attention. Bauhinia divaricata has been studied for its hypoglycemic activity and its aqueous extract (obtained from leaves) has shown a relatively significant hypoglycemic effect in normal mice. 11 The anti- hyperglycemic effect of ethanolic extract of Bauhinia tomentosa (Linn.) flower has been evaluated for the management of Streptozotocin induced diabetes, where significant reduction in plasma glucose level has been observed. 12

It has been established that the aqueous extract from B. megalandra inhibits the intestinal absorption of glucose in rats.13 Recent indication of antidiabetic properties of methanolic extracts of B. purpurea stem bark has prompted a phytochemical analysis of bark of the plant to isolate and identify potential antidiabetic compounds from it.  As a result of this study, isolation and identification of a compound [BP] has been done in the present investigation.

Plant Materials: The bark of Bauhinia purpurea was collected from the surrounding areas of Greater Noida in June, 2010.

A voucher specimen (NHCP/ NBPGR/ 2010-20 dated 10th May 2010) was deposited in the Department of Phamaceutical Technology, N.I.E.T., Greater Noida, Uttar Pradesh, India for future reference. Identification of the plant material was done by Dr. Anjula Pandey, Principal Scientist, National Bureau of Plant and Genomic Resources (NBPGR), New Delhi, India. The part was sun dried after washing and then ground to a coarse powder in a mechanical grinder.

Pulverised, dry bark was extracted successively with methanol in a soxhlet extractor. The solvent was removed by controlled evaporation under reduced pressure on a heating mantle at a temperature below 60oC to obtain a concentrated mass. 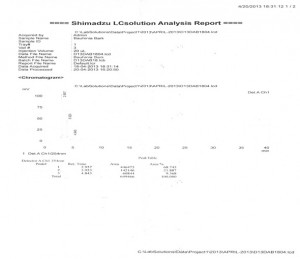 Methanolic extract (10 g) was subjected to a column (2.5 x 50 cm) of silica gel (1:5, 0.063-0.2 mm) using methylene dichloride – methanol as eluent with increasing methanol ratio (250 ml fraction volumes each) and 20 fractions were collected. The first eight fractions collected were pooled into the first main fraction, the next six fractions collected were pooled into the second main fraction and the last six into the third main fraction according to TLC examination of the eluates (chloroform  : methanol : acetic acid:: 6:3:1). Further purification of the first fraction   (3 g) yielded 50 mg of compound BP while the second (4 g) and third fractions (2.5 g) failed to yield pure isolates.

The first fraction was subjected to HPLC at λmax 355 nm. The mobile phase was formed by acetonitrile (solvent A) and 1% acetic acid in water (solvent B) flowing at 1 ml/min (Figure 2). Compound BP was purified and its purity was checked   by HPLC. A typical chromatogram with smooth base line was obtained using the isocratic elution of the compound(Figure 3). 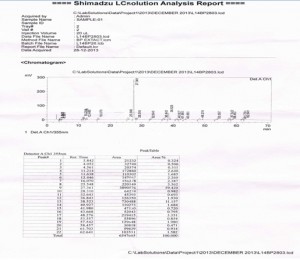 FIGURE 2:  HPLC OF THE FIRST FRACTION OBTAINED BY COLUMN CHROMATOGRAPHY 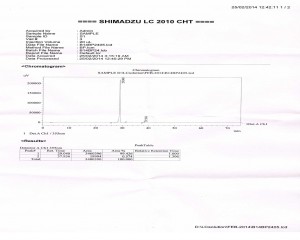 FIGURE 3 HPLC OF THE ISOLATED COMPOUND BP INDICATING A PERCENTAGE PURITY OF 99.426 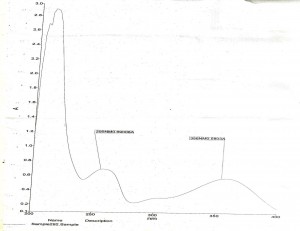 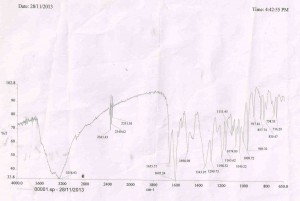 TABLE 1: INTERPRETATION OF THE IR SPETRA 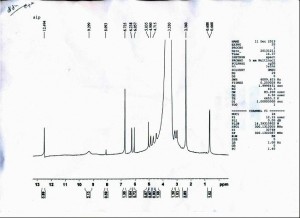 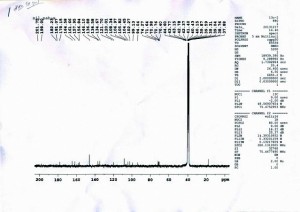 TABLE 2: 13CNMR AND 1HNMR DATA OF THE COMPOUND BP 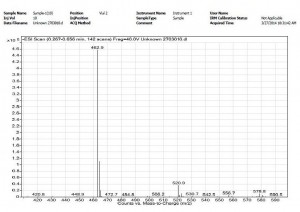 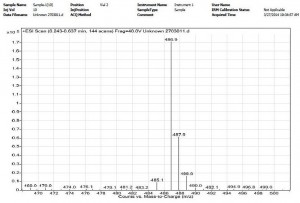 As an effort to identify the bioactive substances, chromatographic separation and purification resulted in the isolation of compound BP, based on its spectral data. This compound was identified as a major component from the bark of Bauhinia purpurea. HPLC analysis of the first fraction showed a major peak at retention time 27.361. The fraction on further analysis yielded a pure isolate. HPLC analysis of the isolated compound showed a percentage purity of 99.4 %.

Compound BP, a white crystalline solid, displayed red color spots upon spraying with 5% vanillin in 10% sulphuric acid in water on a TLC plate. UV absorption maxima at λmax 256 and 356 nm confirmed a coumarin like structure. In the IR spectrum, it showed a strong absorption of phenolic group at 3258.93 and 1343.97 cm-1 and characteristic absorption of the lactone group at 1655.57 cm-1.14 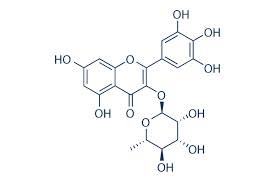 This compound shall now be worthy for pharmacological considerations. In order to exploit the full potentials of this compound, some in- vitro and in-vivo studies are required to determine the mechanism of its action.

ACKNOWLEDGEMENT: The authors are very much thankful to Arbro Pharmaceuticals and IIT, Delhi for facilities and encouragement.