ISOLATION OF EPICATECHIN FROM OXYSTELMA ESCULENTUM

ISOLATION OF EPICATECHIN FROM OXYSTELMA ESCULENTUM

Objectives: The present work deals with the isolation and structure elucidation of Epicatechin from O. esculentum.

Methods: Methanolic extract of the entire plant of O. esculentum was subjected to pilot TLC experiments and column chromatography.

Results: This yielded a pure, white compound which resolved at Rf 0.3 on TLC plate using the mobile phase toluene: ethyl acetate (5:4) when developed in iodine chamber. This compound was subjected to UV, IR and 1H-NMR spectral analysis and its structure elucidation revealed it to be Epicatechin.

Conclusion: This compound has been reported for the first time in this plant and can serve as a useful tool in its standardization.

INTRODUCTION:Oxystelma esculentum R. Br. (Asclepiadaceae) is a twiner growing in water-logged areas of the plains of the Indian sub-continent. It is used traditionally as diuretic, laxative, anti-ulcer, hepatoprotective, galactogogue and anthelmintic 1, 2. Recent pharmacological investigations reveal that it complies with its traditional claims as a laxative3, anti-ulcer 4 and diuretic drug 5. It has been found to contain calogenin 6, lupeol 7, stigmasterol 8, kaempferol 9 and aesculin10. This work deals with the isolation of Epicatechin from O. esculentum. This study could serve as a suitable tool for phytochemical standardization of O. esculentum.

Collection and Authentication: Oxystelma esculentum in flowering and fruiting stage was collected from Barda Hills near Porbandar in October 2008. Herbarium of the collected sample was prepared and deposited in Department of Pharmacognosy, RK College of Pharmacy (No. RKCP/COG/1/2008). Authentication was done by Dr. N. R. Sheth, Head of Department of Pharmaceutical Sciences, Saurashtra University. The entire plants were dried under shade, powdered to 60#, stored in airtight containers and used for further study.

Extraction and Fractionation: Extraction of 1kg powder of the entire plant was carried out in a round-bottom flask at a temperature <50°C using 70% methanol (Spectrochem Pvt. Ltd). Chromatography The dried methanolic extract was subjected to a series of pilot TLC experiments using different proportions (0:10 to 10:0) of various solvents like methanol, dichloromethane, chloroform, ethyl acetate, acetone and water as the mobile phase solvents

RESULTS: The compound resolved at Rf 0.3 on TLC plate using the mobile phase toluene: ethyl acetate (5:4) when developed in iodine chamber. Upon the analysis of melting point and spectral data, the compound was suspected to be a catechin. This was confirmed when the compound gave match-stick test positive. With the help of the data (Table 1) of melting point, UV λmax, IR (Fig. 1) and NMR (Fig. 2a & 2b) and chemical tests, the structure of marker the compound was elucidated and it was found to be Epicatechin (Fig. 3). 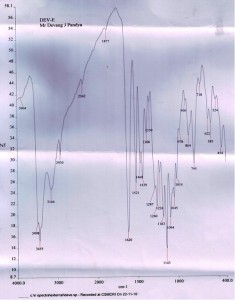 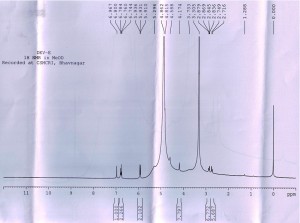 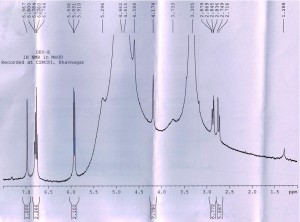 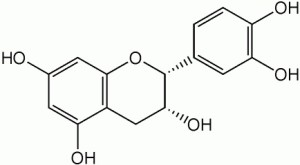 DISCUSSION: The compound shows UV λmax resembling catechins. δ 8.00 of H-NMR indicates the presence of phenolic protons. The IR spectra showed a broad band at 2400-3200cm-1 corresponding to aliphatic and aromatic C-H, phenolic and alcoholic O-H stretching. A band at 1620cm-1 is due to aromatic C=C stretching. The physical, chemical and spectral data and the comparison of H-NMR chemical shifts with that of the reported data of similar type of compounds led to the conclusion that the compound is the Epicatechin, which is a pharmacologically important compound. This study can serve as a tool for phytochemical authentication of O. esculentum, isolation of new phytochemicals and preparation of its formulations.