ISOLATION OF NATURAL BINDING AGENT FROM EULOPHIA OCHREATA LINDL. AND ITS EVALUATION

ISOLATION OF NATURAL BINDING AGENT FROM EULOPHIA OCHREATA LINDL. AND ITS EVALUATION

Aim and objective: To isolate the natural herbal binding agent from Eulophia ochreata Lindl. and study its evaluation properties using diclofenac as a model drug.

Principle: Binders confer structural strength required by tablets during processing, handling, packaging and transportation. A number of plant mucilage, gums/hydrocolloids have been used as binding agents, suspending or emulsifying agents in both solid and liquid dosage formulation. They have been found useful in producing tablets with different mechanical strength and drug release properties for different pharmaceutical purposes. Mucilage is non-toxic and there wide availability has made them of continuing interest.

Method: Present work reports extraction of mucilage of Eulophia ochreata Lindl. by multiple hot maceration technique using water and precipitation by alcohol (28% w/w yield). Physicochemical characteristics of mucilage, such as solubility, swelling index, loss on drying, pH and viscosity, were studied and also microbial load was determined. Mucilage was used in six different concentrations – 2, 4, 6, 8, 10 and 12% w/v. The granules were prepared by wet granulation technique and were evaluated. Starch (10% w/v) was used as binder for comparison. The prepared diclofenac tablets were evaluated for content uniformity, hardness, friability, disintegration time and in vitro dissolution profiles.

Conclusion: The Eulophia ochreata Lindl.isolated mucilage was found to be useful for the uncoated tablet dosage form.

A number of plant mucilage, gums/hydrocolloids have been used as binding agents, suspending or emulsifying agents in both solid and liquid dosage formulation. They have been found useful in producing tablets with different mechanical strength and drug release properties for different pharmaceutical purposes 1.

Mucilage is non-toxic and there wide availability has made them of continuing interest. Binders act by causing aggregation of powders, thereby forming granules through the granulation process.

They modify the cohesive properties of the granules by promoting the formation of strong cohesive bonds between such particles 2. Mucilages are polyuronides consisting of sugar and uronic acid units. They are usually formed from the cell wall or deposited on it in layers. They swell in water and form a gel 3. The usefulness of mucilages as emulsifying, gelling and suspending agents has been well documented 4. Some of the mucilages have also been used in tablet formulations as binding agents and also to sustain the drug release 5. Natural mucilages are nontoxic, non-irritant and act as emollients, stabilizers and stiffening agents 6.

During the ethnobotanical survey made in bhimashankar ghats regions of Maharashtra, we came across the interesting plant such as Eulophia ochreata Lindl. (Family: Orchidaceae). It is a genus of terrestrial orchids, which yield the salepof commerce. This is an herbaceous plant found throughout India and growing in dry deciduous forest in huge patches and on slop where the soil is deep.

Tubers of E. ochreata L.are used for the treatment of stomachache, as an astringent, antifatigue, aphrodisiac, anthelminthic and as a blood purifier. The tubers are also used in cough, cold and heart troubles. Tribes have been using tubers as a general tonic and as rejuvenating since long 7. Localities for availability in Kolhapur district is Mahalunge, Panhala and Turrukwadi 8.

The attempts were first made to check the presence of mucilage by boiling the fresh tubers  of Eulophia ochreata L. with water, which forms  a thick jelly which is highly nutritious 9, 10.

Hence, the present work was attempted to evaluate binding properties of mucilage extracted from tubers of E. ochreata L.

Materials: The tubers of Eulophia ochreata Lindl. was obtained from the Bhimashankar region of Maharashatra, India. Plant material was authenticated by Dr. G.G. Potdar, Department of Botany, Y.C. College of Science, Karad; Voucher specimen was deposited at the same college as number AAK1 and AAK2. Diclofenac was obtained from store department of our college. Lactose, starch and magnesium stearate were purchased from Research Lab (Islampur).

Isolation of mucilage from Eulophia ochreata Lindl.: Eulophia ochreata lindl   tubers powder (20g) were soaked in cold distilled water (200 ml) and slurry was prepared. Then slurry was mixed with 800ml of boil distilled water. The solution was boiled for 20 minutes under stirring condition in water bath. The resulting thin clean solution was kept overnight for settling protein and fibers.

The solution is centrifuge at 2000 rpm for 20 minutes. The supernant was separated and poured in to twice the volume of absolute ethanol by continues stirring to precipitate the Mucilage.

The precipitate was smashed through muslin cloth and dried at 40-45ºC in hot air oven. The dried sample was stored in desiccators until used for further studies 11.

Physicochemical Characterization of the Mucilage: The separated mucilage was evaluated for solubility, swelling index, loss on drying, ash value, pH, and viscosity etc. 13, 14.

Preparation and evaluation of granules: Diclofenac was used as a model drug to formulate granules. Starch was used as standard binding agent, whereas lactose and magnesium stearate were used as diluent and lubricant respectively, the composition is shown in table 3.

The binder solution was prepared by dissolving the mucilage of Eulophia ochreata Lindl. in water at 2 -12% w/v concentrations. The granules were prepared by wet granulation process 11. The drug, lactose and starch were mixed thoroughly, and a sufficient volume of ~20 ml of 2-12% w/v of mucilage of Eulophia ochreata Lindl. was added slowly to the powder blend, and kneading was performed for ~10 min until formation of wet mass with enough cohesiveness. The wet mass was forced through a no. 16 sieve (1180 μm) and dried at 25-30°C in a hot air oven. The prepared granules were then evaluated for friability. Flow properties (by measurement of angle of repose, the bulk and tapped densities of the granules) were determined 16.

RESULT: The dried and coarsely powdered tubers of Eulophia ochreata Lindl. yielded high percentage (28% w/w) of mucilage using ethanol as mucilage-precipitating solvent. The phytochemical examination that is preliminary test was performed to confirm the nature of mucilage, as shown in table 1. The physicochemical properties of mucilage were studied and determined as shown in Table 2. The pH of the mucilage was found to be 7.5-8. Since the pH value of this mucilage is near to neutral, it may be less irritating to gastrointestinal tract and hence was suitable for uncoated tablets 18.  The composition for preparation of granules and tablet is shown in table 3. Diclofenac was easily available so used as model drug and granules were prepared. The prepared granules were evaluated for flow properties (Table 4). It was observed that the flow property of granules was determined by angle of repose, which was found to be 31° to 35°. Hence all the granules exhibited good flow properties.

The bulk densities of the prepared granules were found to decrease slightly by increasing concentrations of Eulophia ochreata Lindl.mucilage. This result may be due to the formation of larger agglomerates and the decrease in fines in the granules, as increasing Eulophia ochreata Lindl.concentrations provide more binding to the granules 18.  However, all formulations show good flow properties. Three batches of 100 tablets were prepared using mucilage of Eulophia ochreata Lindl.  at six different concentrations viz 2%, 4%, 6%, 8%, 10% and 12%w/v. Starch (10% w/v) was used as binder for comparison. The prepared tablets were evaluated for hardness, friability, weight variation, disintegration time and in vitro dissolution profiles. All the batches of tablets exhibited good results as shown in table 5.

The hardness of tablets increased with increase in percentage of binding agent. It is well known that a high concentration of a plasto-elastic binding agent leads to an increase in plastic deformation of the formulation and subsequently to the formation of more solid bonds, resulting in tablets with more resistance to fracture and abrasion4. The tablets A6 (12%) mucilage of Eulophia ochreata Lindl.showed more hardness when compared to tablets A7 (10%) starch. The tablets A4 (8%) of Eulophia ochreata Lindl. showed same hardness as that of tablets A7 (10%) starch. The percentage friability values were reduced and sometimes increased as the concentration of gum was increased. Only A4 (8%) tablets showed good comparison with A7 (10%) starch.  Conventional compressed tablet lose their weight less than 0.5 to 1.0% are generally considered as acceptable 19. The mucilage with increase in concentration increases in disintegration time. The disintegration time of tablet (12% mucilage) was higher as compared to10% starch. The in vitro dissolution profile is shown in Figure 1. It was found that the drug release decreased with increase in concentration of mucilage because the tablet produced the sticky film of hydration on the surface. All the batches showed the good drug release as shown in Table 5. This study showed that the drug release was more than 80% in 90 min. 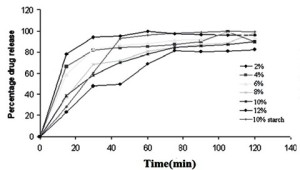 From the present study, it can be concluded that Eulophia ochreata Lindl. mucilage at 8% w/v exhibited good binding propertiescomparable to that of 10% starch.

CONCLUSION: Thus the aqueous dispersion of Eulophia ochreata Lindl. powder was found to be a better binding agent, being used in local region of Bhimashankar region as secondary food material, free from toxicity and is also economic. The advantage of Eulophia ochreata Lindl. over starch as a binding agent was that it could be used as a cold binder whereas starch has to be heated. Eulophia ochreata Lindl. studies are further going to explore its role in drug delivery systems including its release retardant properties and mucoadhesive nature. Further studies will be performed to isolate the active constituent from the plant extract, its phytochemical analysis, spectral characterisation and pharmacological screening.

ACKNOWLEDGEMENT: The author is very much grateful to Hon. Principal Dr. Chandrakant S. Magdum and Hon. Vice-Principal Dr. Shrinivas K. Mohite, of Rajarambapu College of Pharmacy, Kasegaon, for their valuable and continued moral support to bring out this research work and I am also thankful to Dr. G.G. Potdar for their support for identification of medicinal plant.