Categories Menu
Home » ISOLATION OF PENICILLIUM SP. AND ITS ANTAGONISTIC ACTIVITY AGAINST DERMATOPHYTES FROM VOLCANO SOIL OF BARATANG ISLAND, ANDAMAN

ISOLATION OF PENICILLIUM SP. AND ITS ANTAGONISTIC ACTIVITY AGAINST DERMATOPHYTES FROM VOLCANO SOIL OF BARATANG ISLAND, ANDAMAN

ISOLATION OF PENICILLIUM SP. AND ITS ANTAGONISTIC ACTIVITY AGAINST DERMATOPHYTES FROM VOLCANO SOIL OF BARATANG ISLAND, ANDAMAN

ABSTRACT:Penicillium sp. was isolated from the mud volcano of Baratang Island, Andaman, were tested for the growth inhibition against four fungal species of dermatophytes viz., Epidermophyton flococususm, Microsprum gypseum, Tricophyton rubrum, Tricophyton mentagraphytes. Three different concentration of fungal suspension (10µl, 25 µl and50 µl) were tested using disc diffusion method.  Penicillium sp. showed promising antidermatophytic activities against all four pathogens.  Among the concentration tested maximum activity against M. gypseum (25mm) in the concentration of 50 µl and minimum activity expressed against E. flococusum (9mm) in the concentration of 10 µl.  Further, the isolation and characterization of the novel anti-dermatophytic compound is in progress.

INTRODUCTION:Marine fungi are heterotrophic microorganisms, occurring commonly as saprotrophus and parasites.  In general, they occur as saprotrophytus in the large particulate detritus and also as parasites on plants and animals 16. But, prevalence of their different taxonomic groups of fungi varies greatly with varying substrates and extends from the temperate oceans to the polar oceans. Although widespread in terrestrial habitats, they have reminded under explored from various extreme marine habitats.

The isolation of these extremophilic fungi is very essential as they might be potential sources of enzymes with scientific and commercial interests.  Among the various fungal species Penicillium sp. are important species of fungus which is known not only due to their widespread occurrence but also because of their ability to produce mycotoxins and other secondary metabolites 9.  The term “Dermatophyte” literally means “Skin Plant”. The documental use of the word did not appear until 1882 21.

Generally, the less inflammatory infections are the more chronic ones 22. Human infections, particularly those involving the skin and mucous membranes are increasing at an alarming rate, especially in tropical and subtropical developing countries, with the most common pathogens like dermatophytes and Candida sp.  This increase is directly related to the growing population of immune compromised individuals, resulting from changes in medical practice such as the use of intensive chemotherapy and immune-suppressive drugs. HIV and other diseases causing immunosuppression have also contributed to this problem 13, 5.

With this back ground, the present study was aimed to isolate fungal species from volcano soil and to trail the antagonistic activity against dermatophytes. There is a scarcity of references that states the anti fungal activity of volcano soil samples.  Keeping this in mind, the present study was under taken to isolate Penicillium sp.  From the volcanic soil of Baratang Island at Andaman Nicobar, India and to test its anti-dermatophytic activity using crude extracts of Penicillium sp.

Study Area: Andaman and Nicobar islands located in east of Indian mainland which is the archipelago of 512 islands, islets and rocks (Fig. 1).  This union territory stretches over a length of more than 700 kms from north to south with 36 inhabited islands. 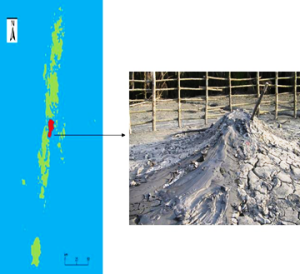 On a hill range extending from Burma (Myanmar) to Indonesia, this indulating landscape is covered with dense forests and endless variety of exotic flora and fauna.  The topography of this island in hilly and abounds in evergreen forests.  The sandy beached on the edges of meandering coastline are fringed with coconut palms that sway to the rhythm of the sea.  The rare flora and fauna, underwater marine life and corals crystal clear water and mangrove lined creeks, after a dream view of the rare gifts of nature.

Collection of Sediment Sample: Sediment samples were collected from the mud volcano, Baratang Island (12° 07′ N; 92° 47′E / 12.117; 92.783), Andaman Island.  For Fungal analysis, pre-cleaned materials were used and samples were stored in sterilized polythene bags and bottles.  Immediately after collection, samples were transported to the laboratory by keeping them in ice box and the samples were processed with 4 hrs.

Isolation and Identification of Fungi: Wet mud samples, weighing approximately one gram each, was placed in 100ml of sterile distilled water shake for 5 minutes.  The resulting soil suspension was diluted in tenfold increment from 102 to 103.  One ml of suspension from each dilution was transferred into separate sterile petridishes in which 20 ml of sterilized and lukewarm mantn’s SDA agar (pH7) was poured.  The petridishes were gently rotated clockwise and anticlockwise to facilitate uniform spread of the inoculums in the medium.

The plates were incubated for a week at room temperature and then the fungal colonies were counted using a colony counter.  Average number of fungal propagules per gram of soil and the average number of species were assessed for every collection. The fungal isolates were then transferred, cultivated and identified to species level applying standard mycological methods 19. Most of the isolates were sub-cultured on Sabouraud Dextrose Agar (SDA) for further study.  The classification outlined by smith 19 was followed here and cultures were examined at frequent intervals.

Preparation of Fungal Crude Extract: Well developed colonies were picked from the fungi culture slant.  Then this colony were inoculated in the mass scale culture medium (SDA) and incubated at 37oC for three days.  After the incubation the dense colonies were centrifuged at 5000rpm for 50mins.  The crude filtrate were kept refrigerate at 4oC.

Anti-Dermatophytic assay with Penicillim sp. crude extract: In vitro antifungal activity of Penicillium crude extracts was determined against four species of dermatophytic fungi.  Stock cultures of fungi were maintained in Czapex Dox agar. For Epidermophyton flococusum, Micorosoprum gypseum, Tricophyton rubrum, Tricophyton mentagraphytes well - drained spores were distributed uniformly of the surface of the agar plates with the help of a sterile cotton swab.  Other fungal strains were inoculated by taking a piece of fungal colony using a sterile cotton swab and gently swabbed on the surface uniformly.  Agar was used as the medium for antifungal assay.  On the surface of the medium, discs inoculated with the extract (20 µl/6mm disc) were placed.  The inhibition zone was measured after 72 hours of incubation.

RESULTS AND DISCUSSION: The restricted fungal samples in volcano soil sample are difficult to identify as they are complicated due to lack of the knowledge.  Based on the identification manual 6, the colony morphology, spores, color of the mycelium and light microscopic identification confirmed the organisms were Penicillium sp (fig. 2). 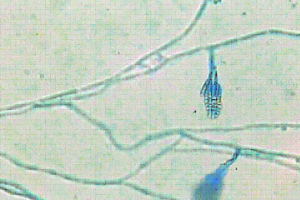 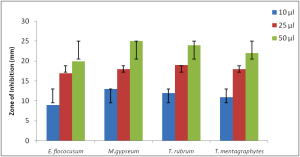 FIG. 3: DIFFERENT CONCENTRATION OF CRUDE EXTRACTS AND ZONE OF INHIBITION IN (mm)

Researchers isolated a number of the thermophilic and thermotolerant fungi and actinomycetes from mushroom compost during peak heating 7. They demonstrated that certain thermophilic fungi have been associated with the process of microbial thermogenesis 20. It has been reported that  anti-dermatophtic  effect of (+) – crucuphenol against the human pathogenic fungus Trichophyton mentagrophytes, as dermatophyoses are the most common form of fungal infection found in most countries, affecting skin, hair and nails 22.

However, the present study is the first attempt made to study the fungi from volcanic soil as a novel anti- dermatophytic agent. The crude extract for Penicillium sp. was evaluated against the dermatophytes at different concentrations of 10µl, 25 µl and 50 µl and result shows that all the test concentration crude extract inhibited the growth of the dermatophytes. Hence the present investigation proved the Penicillium sp. isolated from volcanic soil contains novel anti- dermatophytic compound.

The present investigation provides basic information on the anti- dermatophytic effects of the Penicillium sp. are isolated from extreme conditions. However, much detailed clinical trials are very essential for its commercial application. The extracts must also be performed to ensure the safety of the extracts.

ACKNOWLEDGEMENTS: Authors thank to Dean and Director, Faculty of Marine Sciences, Annamalai University, Parangipettai and to Dr. K. Sivakumar, for the facility given throughout the study period.