ISOLATION OF RUTIN FROM PHYLLANTHUS AMARUS

ISOLATION OF RUTIN FROM PHYLLANTHUS AMARUS

ABSTRACTGeneral phytochemical screening of Phyllanthus amarus (Euphorbiaceae) revealed the presence of Saponin, tannins, glycoside and alkaloids etc. The aim of this study is to identify and characterize the bioactive principle from the plant. It has wide folk medicinal uses. The isolation and characterization of Phytoconstituents was done from the methanolic extract by the gradient fractionation method. The structure of the isolated compound was established on the basis of physical, chemical test and spectroscopic evidences (IR, UV, 1HNMR, MS). A flavonol structure was isolated from the methanolic extract of the plant. The odorless, colorless compound which solubilizes in methanol having m.p. 186oC and Rf value 0.46 in mobile phase Methanol: Glacial Acetic Acid: Water (90: 5: 5) was identified by the various spectroscopical methods. So from this study it is concluded that isolated compound may be rutin which is responsible for various pharmacological activities of the plant

INTRODUCTION:The plants of the genus Phyllanthus (Euphorbiaceae) are widely distributed in most tropical and subtropical countries. It is a very large genus consisting of approximately 550 to 750 species and is subdivided into 11 subgenera. Phyllanthus genera contain many important phytoconstituent which are responsible for various type of pharmacological activity like very effective hepatoprotective agents in the Indian indigenous systems of medicine and are considered bitter, astringent, stomachic, diuretic, febrifuge, deobstruant and antiseptic 1. Among the popular species, P. niruri, P. urinaria, P. emblica, P. flexuosus and P. amarus, have received the most attention.

Phyllanthus amarus known as “Bhui amla” (Family – euphorbiaceae) widely distributed throughout the rainforest region of Northern India. It is an annual herb grows up to 15-60 cm high have an erect stem.  The plant is most commonly used in the Indian Ayurvedic system of medicine in problems of stomach, genitourinary system, liver, kidney and spleen 2. P. amarus have different classes of organic compounds of medicinal importance including alkaloids, flavonoids, hydrolysable tannins (Ellagitannins), major lignans, polyphenols, triterpenes, sterols and volatile oil 3.

Collection & Authentication: The Phyllanthus amarus was collected from Chandrashekhar azad agriculture university, Kanpur in the month of July-August. The plant material was authenticated by Prof J. P. Shukla, Department of Botany, D.B.S College, Kanpur where a voucher specimen (PH/PA/20) is deposited for further reference.

Extraction and Isolation of Compound: The dried plant material (100gm) is extracted with two successive quantities (2x 200 ml) of Methanol (80% v/v). The resulting filtered extract is carefully evaporated under vacuum in a rotary evaporator till it reaches up to 50-60 ml. The content of the flask is mixed with equal volume ether and the ethereal layer was separated. The hydro alcoholic layer is again extracted with the same volume of ether and the ethereal layer is separated. Both the ethereal layer is discarded. The hydro alcoholic layer is evaporated under reduced pressure to 10 ml. Same process was repeated with chloroform and discards the chloroform extract. Keep the concentrated residual liquid in refrigerator (0-5oC) over night when a solid crystalline substance appears.

The TLC of isolated crystal was performed using the mobile phase Methanol: Glacial Acetic Acid: Water (90: 5: 5) on silica gel G. The Rf value was 0.46. The characterisation of the isolated compound was done on the basis of phytochemical analysis (shinoda test, zinc hydrochloride reduction test) and spectroscopic studies. (IR, UV, 1HNMR).

General and Physical Properties: Appearance, color, taste, odor, solubility and melting point of the isolated constituents will be determined.

Chemical identification of Constituents: Little amount of the isolated constituent are dissolve in methanol and perform the following test- 4, 5 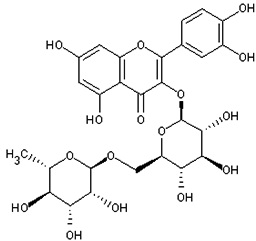 General and Physical Property: It is pale yellow needles which gradually darken on exposure to light. It is tasteless and odorless. It is soluble in pyridine, formamide, methanol and alkaline solution. Melting point of the constituent was founded 189° C.

NMR values: Chemical shifts of Rutin in DMSO-D6 with respect to TMS.

Mass Spectrum: The mass spectrum of rutin obtained by desorption chemical ionization (DCI) using ammonia as a reactant gas show a molecular ion M at m/e 611 amu. The prominent fragments and their relative intensities are shown below

General description and spectral analysis shows that the isolated constituent is rutin. Based on the melting point and other related data (UV, IR, 1HNMR and 13CNMR) the structure of the isolated compound was proposed as;

CONCLUSION: From the above study, a flavonol structure (Rutin) was isolated and characterized from methanolic extract of Phyllanthus amarus Linn 6, 7. Rutin inhibits platelet aggregation 8, as well as decreasing capillary permeability, making the blood thinner and improving circulation.9 It also showsanti-inflammatory activity, aldose reductase activity, antioxidant  activity, can reduce the symptoms of haemophilia and reduce the cytotoxicity of oxidized LDL cholesterol which lowers the risk of heart disease 10.  There is also some evidence that rutin can be used to treat hemorrhoids, varicosis, and microangiopathy 11.