INTRODUCTION: Anthereae mylitta drury a lepidopteran insect of the Saturniidae family produces tasar silk of commercial importance. The environment and various diseases of silkworm are major constraints in tasar culture which reduced the crop yield and made the silk industry unreliable 1. In Anthereae mylitta drury the bacterial infections (flacherie) lead to rectal protrusion, sealing of anal lips and leading to chain type excreta. The causative organisms for this flacherie include Streptococcus sp., Staphylococcus sp., Bacillus thuringiensis, Serratia marcescence, Pseudomonas sp., etc. Antibacterial peptides are evolutionarily conserved and have both hydrophobic and hydrophilic sides that enable the molecules to be soluble in aqueous environments yet also enter lipid - rich membranes 2.

These peptides kill target cells through diverse mechanisms once they reach the target microbial membrane. They possess a wide array of biological mechanisms from direct killing of invading pathogens to modulation of immunity and other biological responses of the host 3. These antimicrobial peptides are the first line of host defense in various species, have a mass of ≤10 kDa and are readily synthesized and efficiently diffuse at the point of pathogen entry or infection, hence form an invaluable component of the innate immune system 4, 5.

The two stages to fight an infection involves, removing the bacteria from circulation by phagocytosis, nodule formation and de novo synthesis of RNA and specific proteins which give rise to increasing antibacterial activity in haemolymph 6. Various works has been carried out on induction of immunity in insects 7 - 9. Some peptides that are well characterized in insects include mastoparan, poneratoxin, cecropin, moricin and melittin 10. Earlier, antibacterial peptides have been isolated and purified from insects of different orders, viz., dipteran, isopteran, lepidopteran and coleopteran 3, 11, 12, 13. Given the amphoteric character of proteins the pH of the solution is important in the determination of the type of ion exchanger used. Immunoglobulins, although they can be purified by either cation or anion exchange chromatography, are most frequently purified by anion exchange with DEAE resins 14.

Present study has taken up to induce synthesis of antibacterial proteins in Anthereae mylitta drury (Daba TV) and also to isolate, purify and characterize these proteins and to find their efficacy in controlling bacterial disease caused by Pseudomonas sp.

Culture Medium and Maintenance of Micro Organisms: In the present experiment the bacteria used for challenging Anthereae mylitta drury (Daba TV) were P. aeruginosa AC-3 and nonpathogenic Pseudomonas DAS - 01. Bacterial colonies were grown on LB agar plate at 37 °C overnight in an orbital shaker at 300 rpm and 37 °C temperature. The overnight grown culture was centrifuged (REMI centrifuge) next day at 4 °C and 5000 rpm, and the pellet was resuspended in sterile saline. Before injecting, the number of Pseudomonas cells counted by serial dilution method, made a dosage of 1 X 106 cells/ml and stored for further study.

Anthereae mylitta Drury (Daba TV) Rearing: During the month of April 150 Daba TV coccons were collected from the forest patches of Jakaram, Warangal District, accomadated in wire mesh cages of size 2ftX2ftX2ft. The emerged moths were tested for microsporidiasis 15. The eggs from healthy moth were incubated. The hatched larvae were reared in the field. Third instar larvae of 18gm weight each were divided into two batches containing 50 larvae each. One batch was injected with a dose of 2µl of non-pathogenic Pseudomonas DAS - 01 from stored culture medium on the dorsal segment by Hamilton micro syringe whereas for control at the same position, 2µl Ringer’s solution was injected. Haemolymph was collected from both the batches in the test tubes by cutting the proleg. 1 mg of Thiourea was added to the test tubes to prevent melanisation. After centrifugation at 15000 rpm for 15 min the supernatant was collected and stored at - 20 °C for further analysis.

Antibacterial Assay: Antibacterial assay was done by diffusion method 16. LB media is inoculated with 0.1 ml (106 cells/ml) of two bacterial strains. Sterile paper discs soaked in Pseudomonas DAS- 01 induced and control Daba TV haemolymph were inserted in the media present in separate plates. The plates were incubated at 35 °C and inhibitory activity was determined after 48 hrs by zone of inhibition.

Protein Estimation: Haemolymph proteins of induced and control, flow through, wash and elute was estimated by 17.

Ion Exchange Chromatography: 20ml of dialysate obtained from ammonium sulphate precipitation (0 - 30% fraction) was subjected to ion exchange chromatography using DEAE- Sephroase. DEAE sepharose was packed in Bio-Rad econo column (42.5 X 2.5 cm) equilibrated with 0.01 M phosphate buffer pH 7.5 with a flow rate of 1.5mL/min which was set up in an FPLC system (Bio-Rad). The bound fraction was eluted by a linear gradient of 0 - 1 M NaCl in 0.01 M phosphate buffer. Flow through, wash and elute peak fractions were pooled and dialyzed against the phosphate buffer pH 7.5 (0.01 M). The dialyzed fractions were studied for their effectiveness against bacteria by means of zone of inhibition 18.

Antibacterial Assay with Dialysed Fractions: For this 10 healthy 3rd instar larvae of Daba TV were injected with 5µl flow through, and ten were injected with 5µl Ringer solution. After half an hour, they were challenged with 2µl of overnight grown culture of P. aeruginosa AC-3 and Pseudomonas DAS - 01 and fed on tender leaves of Terminalia arjuna. Haemolymph collected from control and flow through injected larvae was tested for antibacterial activity by inhibition zone assay method.

SDS - PAGE: Haemolymph of flow through injected larvae and control was subjected to 15% SDS PAGE 6. Haemolymph samples diluted to sample buffer of mercaptoethanol and heated to 100 °C for 3 min before application.

RESULTS: Present study focuses on induction of immunity in Anthereae mylitta drury (Daba TV) by injection of live non-pathogenic strain of Pseudomonas DAS - 01. Haemolymph collected from immunized third instar Daba TV has revealed a clear zone formation of size 2.3 mm and 2.4 mm against P. aeruginosa AC3 and Pseudomonas DAS - 01 in plate growth inhibition assay whereas untreated larvae (Control) were found to be devoid of significant zone of inhibition (Fig. 1 and 2). 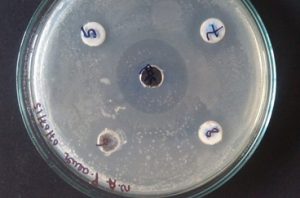 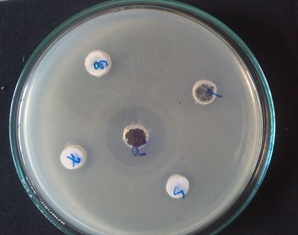 Results also show that, the fractions collected from ion exchange chromatography also shown antibacterial activity. Flow through has shown highest activity with a clear zone formation of size 2.5 mm and 2.6 mm against P. aeruginosa AC3 and Pseudomonas DAS-01 (Fig. 3). Lepidopteran antibacterial peptides had strong inhibition against various bacteria 19. It is known that insects inoculated with live non-pathogenic or killed bacteria can acquire resistance to subsequent challenge by bacterial pathogen 20. It was found that in Drosophila, response to microbial infections mounts a multifaceted immune response involving humoral reactions that culminate in destruction of invading organisms by lytic peptides 21. 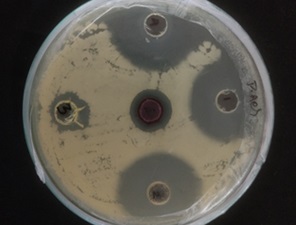 Estimation of haemolymph proteins after injecting non-pathogenic strain of Pseudomonas DAS - 01 and Ringer’s solution (control) in third instar Daba TV resulted in 28.6mg/ml, 24.8mg/ml respectively. It was found that protein concentration in injected haemolymph was higher by 3.8mg/ml than its control counterpart.

Present results also show that flow through obtained from ion exchange chromatography contains maximum protein followed by wash and elute (Table 1). This difference can be attributed to induced proteins formed against bacteria for self-defence. Studies on insect haemolymph revealed the presence of a variety of proteins in response to injury or bacterial challenge 22. After partial purification by ammonium sulphate precipitation, ion exchange chromatography was done for complete purification of proteins.

3rd instar (Daba TV) inoculated with this active effective flow through fraction and the control with Ringer solution. The haemolymph obtained from these larvae when subjected to SDS - PAGE had shown various bands. But two peptidesin the low molecular weight region were observed only in the flow through fraction injected larvae. These bands were detected between 16 and 24 kDa low molecular weight region (Fig. 5). 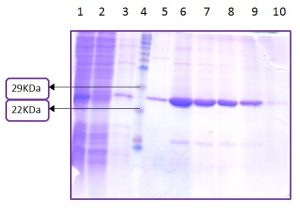 These proteins are effective in fighting against Gram-negative bacteria such as P. aeruginosa AC-3, and Pseudomonas DAS - 01, which was concluded by inhibition zone assay method. Lysozyme of 11 - 28 kDa protein, directly attacks bacteria by hydrolysing their peptidoglycan layer of the cell wall 23. Cecropins and attacins are small molecular weight proteins ranging from 4 to 10 kDa and are effective against both Gram-positive and Gram-negative bacteria 24. Antimicrobial peptides (AMPs) are reported to be small molecular weight proteins with the molecular sizes in the range of 7 to 12 kDa 25, 2. Protaetins 1 and 3 purified and characterized from larval haemolymph of Protaetia brevitarsis, have molecular masses of 7.5 and 12 kDa, respectively while protaetin 2 was determined to be 9kDa 13.

DISCUSSION: The spread of flacherie in insects can be limited by synthesizing antimicrobial peptides in its body. They have pattern recognition proteins that can bind to the external surface of bacteria or other pathogens 26.

In this study the non-induced and the induced haemolymph of Anthereae mylitta larvae was screened for the antimicrobial activity against P. aeruginosa AC-3 and pseudomonas DAS - 01. The non - induced haemolymph did not show inhibitory activity whereas induced haemolymph had shown inhibitory activity. Defensive peptides or proteins play a crucial role in insect humoral immune response against invading microorganisms 27, 28. Insect species injected with bacteria into haemocoel, elicit the synthesis of peptides and proteins, which are individually or cooperatively active against the foreign microorganisms and induction is a common process in many insect species 29. Anthereae mylitta drury (Daba TV) injected with purified antimicrobial fraction (flow through) resulted into proteins which were active against tested bacterial strains.

Antibacterial assay resulted in maximum zone of inhibition confirms that peptides are produced to combat bacterial infection. Low molecular weight for these peptides is in correlation with molecular weight of lysozyme. However, constitutive and inducible proteins may be present in haemolymph of some insects and may act as signalling molecules such as lysozyme 30, 31.

It may be assumed that the proteins identified in this study might play an important role in their self-defense against bacterial infection in Anthereae mylitta drury. However, further studies are needed to study the combined effect of proteins. Many bacteria have already developed resistance to conventional antibiotics like Ampicillin, penicillin etc., It is also believed that antimicrobial peptides will be assumed in the near future as an alternative for the classical antibiotics 30. The advantages of antimicrobial peptides are many viz, selectivity, fast killing, broad antimicrobial spectra and lack of resistance development 32.

CONCLUSION: Thus in conclusion some inducible antibacterial peptides are present in Anthereae mylitta drury (Daba TV). These peptides can be used as blueprints for the design of new antimicrobial agents. Antimicrobial peptides based therapies will form attractive candidates as alternative antibiotic treatments, since they offer several potential advantages over currently used classes of drugs.

CONFLICT OF INTEREST: The author declares no conflict of interest regarding the publication of this paper.