INTRODUCTION: The genus Derris of the family Leguminosae, tribe Tephrosieae, subfamily Papilonoidae, has recieved much attention from phytochemical perspective as this species of this tribe is known for its large content of flavonoids 1.  Derris species are distributed over the tropical areas of asia and east africa. All species are woody perennials and mostly climbers.  Abundant flavonoids and many other compounds of phytochemical interest are isolated from Derris plants and can be categorized into aurones, chalcones, coumarins, flavans, flavanones, flavones, glycosides,  isoflavones,  pterocarpans,  quinoids, rotenoids, steroids,  stilbenes and terpenoids.

Derris species from India are known for medicinal value and different parts of species have been used in folk medicine for bronchitis 19, cough, rheumatoid arthritis 20, diabetes and as anti- fertility agent 21

MATERIALS AND METHODS: Air-dried ariel parts of Derris brevipes (650 g), were powdered in a wiley mill and extracted with an order of solvents in increasing polarity petroleum ether, chloroform, methanol and water respectively. The extracts were filtered and subsequently concentrated by using rotary vacuum evaporator which afforded green solid for petroleum ether extract, dark green solid for chloroform extract brown solid for both methanol and aqueous extract.

Further purification of isolated compounds was done by preparative thin layer chromatography. Compound 1 was crystallized from chloroform-methanol as yellow-orange needles, m.p. 157-158 0C. It gave a pale pink colour in the cyanidin test indicating it to be a flavonoid.  Both compounds also gave positive Ferric chloride test indicating to be flavonoids.

Mass spectrum at m/z 161 [M+-177] is also confirmed the presence of methoxy group on ring B of chalcone. The rest substitution groups are hydroxy group, hydroxy chelated with carbonyl of chalcone and dimethylallyl group. These three substitution groups are located on ring A of chalcone.  Chelated hydroxy at δ 13.45 (1H, s) is assigned to be located on position 2’. From 1H NMR spectrum, there are two aromatic protons left.  These two protons have correlation with each other shown by COSY spectrum.

Therefore, another hydroxy group δ 10.31 (1H, broad singlet) should locate at 4’ position which is ortho position of 5’ proton. The rest substitution group is dimethylallyl group which should locate on the 3’ position.

Compound 2 was isolated from column chromatographic fractions having solvent combination of chloroform: methanol in a proportion of 5:5 to 5:7 and was purified by Preparative thin layer chromatography.  The absorption band at 3262 cm -1 is characteristic of OH stretching. Absorptions recorded at 1185 cm -1, 1133 cm -1, 1079 cm -1 and 1021 cm -1 are characteristic of the CO stretching. The absorption at 1651 cm-1 is characteristic carbonyl conjugate stretch. Analysis of the mass spectrum obtained from compound 2 shows that the compound has a molecular formula containing C20H18 O10.

The COSY contour map also shows correlations between the signals of protons at 5.08 (H-1'') is 3.16 (H-2'') (J = 8.0 Hz) that is characteristic of hydrogen atoms in the positions anti-periplanar the glycoside ring. The NMR analyzes of compound 2 are consistent with the corresponding data of a derivative of luteolin. 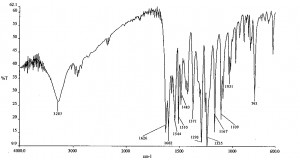 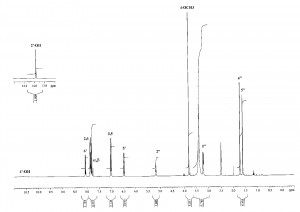 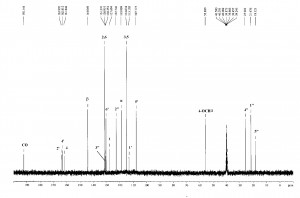 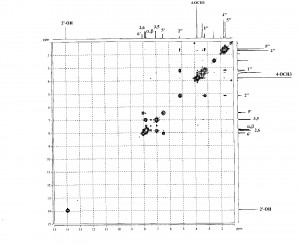 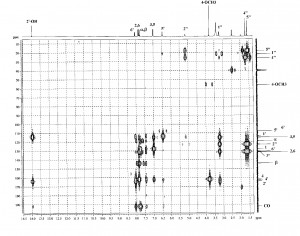 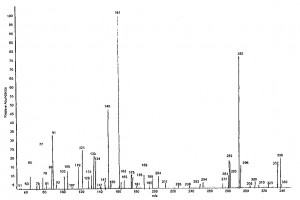 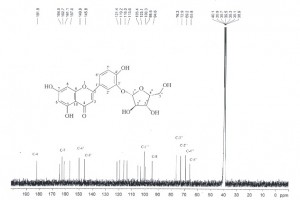 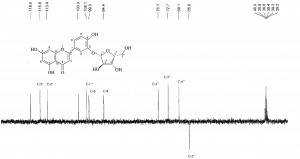 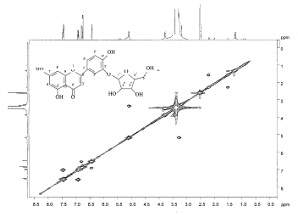 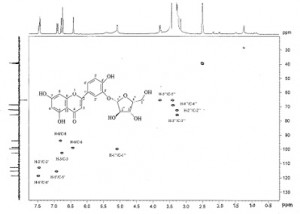 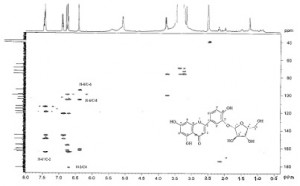 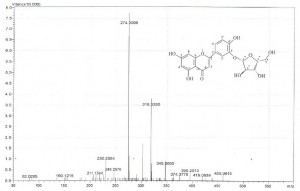