ABSTRACT: L-arginase (EC 3.5.3.1) is a therapeutic enzyme which catalyzes the hydrolysis of L-arginine to L-ornithine and urea. L-arginase is of keen interest due to its significance as an anti-cancer mediator against auxotrophic cancers. This enzyme is widely distributed and expressed in organisms like fungi, plants, non-chordates, and chordates, however very scarce report is available for L-arginase from bacteria. Therefore, the present study was aimed to isolate L-arginase producing bacteria from soil. Soil samples were collected from different locations in and around Karnatak University campus, Dharwad, Karnataka, India. L-arginase activity was confirmed by rapid plate assay screening using minimal arginine agar media and estimating the urea level colorimetrically. Among the sixty-eight isolates, twenty-nine of them were positive for the L-arginase production, but, the most potent isolate was selected, characterized, and identified in our study. The isolate was identified as Pseudomonas sp. strain PV1 (GenBank accession number MK459549.1).

INTRODUCTION: L-arginase (EC 3.5.3.1) is a ureohydrolase enzyme that catalyzes L-arginine to ornithine and urea 1. It is a crucial enzyme in the urea cycle, which facilitates the organism in detoxifying ammonia and excretion of excess nitrogen from the system 2.  It is widely distributed and expressed in different organisms 3. L-arginase regulates the cellular levels of arginine through these metabolic pathways i. Regulates the level of L-arginine for the production of nitric acid, ii. Regulates the level of L-ornithine for the production of L-proline and polyamines to form collagen and facilitate cell growth and repair, respectively 4, 5. L-arginase occurs in two forms in mammalian tissues, i.e., L-arginase I and II, which are coded by the genes located on chromosome 6 and 14 respectively 6.

L-arginase has been reported to play a crucial role in the treatment of neurological disorders 7, allergic asthma 8, rheumatoid arthritis 9, it is also found to have tumor inhibitory properties and has been accredited substantial consideration due to its extensive range of activity against cancer cells 10. Certain cancers cannot biosynthesize arginine due to lack of expression of argininosuccinate synthetase-1 (ASS1).

These cancers require arginine for proliferation and metastasis. L-arginine is catabolized into L-ornithine and urea. Nutritional starvation due to lack of L-arginine leads to inhibition of DNA, RNA, and proteins biosynthesis, ultimately resulting in apoptosis of cancer cells. Normal cells can synthesize arginine due to which remain unaffected 11, 12. This resulted in a persistent attempt to screen newer organisms to find strains capable of fabricating new L-arginase with great yield and fewer adverse properties. L-arginase has considerable anticancer potential; there are only a few investigations for sources of production of this enzyme.

Mammalian arginase 13 has been characterized well, relatively a very few reports on prokaryotic arginase have been characterized 14 such as Bacillus brevis 15, B. anthraci 16, and Helicobacter pylori 17. Studies of the enzyme from fungi, Neurospora crassa 1, Aspergillus nidulans 18 and Penicillium chrysogenum 10 have been reported. Micro-organisms can be easily cultivated and manipulated due to which they are considered a good source for the production of enzymes 19. Anticancer enzymes from micro-organisms are of keen interest because of their specific activity and stability at various physiological parameters. However, not much work has done on the isolation of L- arginase from bacteria. Hence, the present investigation deals with the isolation, screening, and identification of most potent L-arginase producing bacteria from soil.

Collection of Soil Samples: Soil samples were collected in sterile polythene bags from different locations in and around Karnatak University campus, Dharwad, Karnataka, India, and stored at 4ºC until further use.

Isolation and Screening of L-arginase Producing Bacteria: Soil samples were serially diluted, spread on the nutrient agar plates and incubated at 37ºC for 24-48 h. Bacterial colony morphology was studied, examined for microscopic and biochemical characters and subjected for further screening. Bacterial strains were sub-cultured on nutrient agar slants every 15 days.

Isolates were screened for L-arginase activity by streaking on minimal media constituting: KCl 0.5%, MgSO4 0.5%, KH2PO4 1.0%, FeSO4 0.1%, ZnSO4 0.1%, L-arginine (HiMedia, India) 1.0%, and fluconazole (20 µg/ml) 20. In the present study, the media was further modified using phenol red 2% in our laboratory.  The inoculated plates were incubated for 48 h at 37ºC. The isolates which turned media to pink were positive and were selected for further screening.

Estimation of L-arginase Activity: The positive isolates were fermented in the media with composition: glucose 1%, peptone 0.5%, yeast extract 0.5% K2HPO4 0.1%, L-arginine 0.5%, pH 7.0 and the flask were incubated in an incubator shaker at 120 rpm at 37ºC for 96 h 21. Samples were withdrawn at regular intervals of 24 h for determination of enzyme activity.

L-arginase activity was determined based on the amount of urea released in the reaction. Urea on heating reacts with α-isonitrosopropiophenone (Sigma-Aldrich, India) in the presence of ethanol produces a pink color which was estimated colorimetrically 22. The reaction mixture consisted of 0.2 ml of glycine buffer (pH 9.0), 0.5 ml of an enzyme, and 0.1 ml of MnCl2. L-arginase was activated by incubating at 37 ºC for 10 min. L-arginine hydrolysis was achieved by incubating the activated arginase with 0.1 ml of L-arginine at 37ºC for 30 min 1 ml of perchloric acid was added to arrest the reaction. The urea liberated was estimated by addition of 0.1 ml of 4% α-isonitrosopriopophenone at 540 nm.

Characterization and Identification of Potent Bacterial Isolate Producing L-arginase: The potent isolate was identified based on morphological and biochemical characters by Bergey’s Manual of Systematic Bacteriology 23. Further molecular characterization was carried out by16s rRNA sequencing at Agarkar Research Institute, Pune.

Isolation and Screening of L-arginase Producing Bacteria: A total of sixty-eight bacterial isolates were isolated from different soil samples and used for various screening studies. 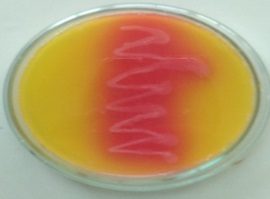 FIG. 1: ISOLATE SHOWING POSITIVE RESULT FOR THE PRODUCTION OF L-ARGINASE

The current study involved the screening of isolated bacteria, on minimal arginine agar media with arginine as the sole source of nitrogen and carbon, in which only the organisms that were able to utilize nitrogen and carbon could grow 16, 24. In our study, the minimal media was further supplemented with phenol red as indicator and fluconazole as an anti-fungal agent. Phenol red dye in media at acidic pH is yellow, which turns pink at alkaline pH. The presence of a pink colored zone around the colonies on plates is due to the liberation of arginase 21.  In the current study, twenty-nine isolates showed a pink zone around the colonies, indicating that they produce L-arginase.

Quantification of L-arginase: So far, the reports for L-arginase from bacterial sources are poorly characterized relative to those from animals 25 or plants 26. In the present investigation, among the twenty-nine isolates, bacterial isolate 20 showed the highest activity of 34.86 U/ml at 24 h. All other strains in this study exhibited maximum activity at 48 h. Previous studies have reported highest L-arginase activity of Bacillus thuringiensis SK 20.001, and Rummeliibacilus pycnus SK31.001 was 8.4 U/ml 21 at 24 h and 40.2 U/ml 27 at 16 h respectively with an optimal temperature of 80℃. Comparatively, our isolate has shown better results at 37ºC, which indicates that it can be easily cultured and its high productivity reveals that this organism could be a good candidate for the L-arginase production.

Identification and Characterization of the Most Potent Bacteria: The morphological and biochemical characteristics of isolate 20, which showed highest L-arginase activity Table 1 and 2, indicated that the organism belonged to the genus Pseudomonas. Molecular characterization by 16s rRNA sequencing revealed that it has about 99% similarity with Pseudomonas sp. strain SB743. Hence, the strain was confirmed as Pseudomonas sp. strain PV1 (GenBank accession number MK459549.1).

Phylogenetic Analysis: Based on the Tamura-Nei model, evolutionary history was inferred using Maximum likelihood method 28. The tree with the highest log likelihood (-2073.31) is shown. Mega7 was used to conduct evolutionary analysis 29. 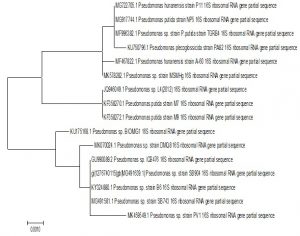 CONCLUSION: L-arginase is a biocatalyst of choice for the present and future, owing to its unique properties and a key enzyme in pathophysiology with novel therapeutic roles. Very scarce literature is available regarding the isolation, screening of L-arginase from bacteria. Hence, in the present investigation, L-arginase producing bacteria were isolated from soil and tested on the minimal media with slight modification using phenol red as indicator and fluconazole as an anti-fungal agent which makes the observation more conspicuous.

Based on L-arginase activity, the most potent strain was identified to be Pseudomonas sp. strain PV1.  Further, enzyme optimization, purification of L-arginase from bacteria can be exploited for profound therapeutic benefits in the treatment of various physiological disorders in the body. The use of L-arginase as a potential chemotherapeutic agent could show a lot of potential and promise in the coming years.

ACKNOWLEDGEMENT: The authors are thankful to the PG Department of Biotechnology and Microbiology, Karnatak University, Dharwad, for providing all the necessary facilities and University Grants Commission Maulana Azad National Fellowship for awarding fellowship for the year 2016-17.