ISOLATION, SCREENING, CHARACTERIZATION AND DETERMINATION OF B-COMPLEX VITAMINS BY LACTOBACILLUS STRAINS FROM DIFFERENT SOURCES OF MEAT

ISOLATION, SCREENING, CHARACTERIZATION AND DETERMINATION OF B-COMPLEX VITAMINS BY LACTOBACILLUS STRAINS FROM DIFFERENT SOURCES OF MEAT

INTRODUCTION:Probiotics have been defined as “live microbial food supplements which beneficially affect host by improving the intestinal microflora balance” or more broadly as “living microorganisms, which upon ingestion exert health benefits beyond inherent general nutrition”. There are, more recently, increasing experimental and clinical data to support the use of proven probiotic organisms in prevention and treatment of many gastrointestinal disorders.

These include inflammatory bowel disease, infectious and antibiotic related diarrheas, and post – resection disorders including pouchitis.Lactobacillus is commercially important bacterium with wide variety of applications, both in food industry and as a probiotic agent for the improvement of human health 1, 2. The long history of its use in food industry and its “generally regarded as safe ”(GRAS) status render it a promising bacterial strain for genetic modification 1.

Genetic modifications to Lactobacillus strains are normally targeted toward the improvement or augmentation of specific strain characteristics, such as the production of compounds antagonistic to common food pathogens 3-6. Attempts have also been made to transform Lactobacillus strains into delivery vehicles for biological compounds, particularly for the delivery of enzymes in to the gut of the host, thereby enhancing digestion 7.Under ideal conditions, these modified strains would benefit the host.

However, under natural conditions, the performance of the modified Lactobacillus strains is frequently affected by indigenous plasmid. Especially in cases in which the manipulations are plasmid mediated. Incompatibility between the indigenous plasmids and the introduced plasmids is one of the principle factors contributing to plasmid instability within a host 8. These plasmids may not only interfere with the stability of the recombinant plasmid, but also harbor undesirable traits, e.g., antibiotic resistance 8. Thus, before genetic modification studies can be considered with such a strain, it becomes necessary to eliminate such indigenous plasmids.

Here, the aim of this study  is to investigate the B-complex vitamin production by Lactobacillus strains which are isolated from different sources of meat. Meat is defined as the parts of livestock muscles that is skeletal or is found in the tongue, diaphragm, heart, oesophagus with or without the accompanying of overlaying fat and the portion of the bone, skin, sinew, nerves and blood tissue that normally accompany the muscle tissue and are not separated from it in the process of dressing 9. Here, the meat portion taken is the cutted pieces of goat intestine and beef intestine for analysis of B-complex vitamin production by Lactobacillus strains.

Isolation of Lactic Acid Bacteria from Goat and Beef Intestine:

After 24 hrs, Lactobacillus  strains were transferred  to  the petri plates having MRS agar media with help of loop to get individual strains of Lactobacillus 5.

Antibiotic susceptibility tests before and after curing: Streptomycin, Ampicilin, Tetracycline were taken in the range of   10 mcg/disc, 10 mcg/disc, 30 mcg/disc respectively from HIMEDIA for antibiotic susceptibility test. Then MRS broth contained 41 strains were individually transferred to MRS Agar plates by spread plate technique & kept in incubator at 37oC  for 24 hrs.Next day, Zone of inhibition for those antibiotics was measured according to the standard zone size interpretative chart given by HIMEDIA 9, 10, 28.

Curing of Plasmid DNA: Curing of plasmid DNA (means removal of plasmid DNA) can be done by using various curing agent like Ethdium bromide (Etbr), Novobiocin, acriflavin, SDS   (Sodium dodecyl lauryl sulphate 6, 24.Here, Ethdium bromide (Etbr) was used as curing agent to cure the plasmid DNA in the concentration of 12 micro liter/ml of organism culture (Posono et. al.,) and kept incubation overnight. Next day, isolation of plasmid DNA was carried out by agrose gel method to confirm whether curing has happened or not? Then again antibiotic susceptibility tests by those antibiotics were used before. The procedure followed for isolation of plasmid DNA was alkaline lysis method. Finally 5 isolates were selected as potent probiotic 27, 30.

Preliminary & Biochemical tests to confirm LAB: Preliminary Tests such as Gram`s staining, Catalase tests  and Biochemical tests like gas production tests, Arginine tests ,Growth at different temperatures 45oC,  15oC, 10oC were performed and confirmed as 41 strains (21 from Goat & 20 from Beef) were Lactobacillus according to the following flow chart 5; 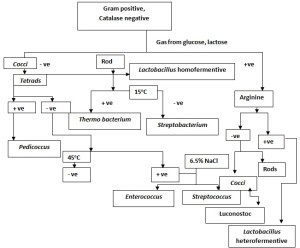 According to the results obtained above, compared with standard zone size interpretative chart given  by  HIMEDIA   (which published by CLSI ,  formerly NCCLS standards) explained in table 3. Antibiotic susceptibility  tests  after curingthe Lactobacillus strains isolated from goat sample  didn’t obey to standards whereas 5 Lactobacillus strains isolated from beef sample obeys  standards (selected only resistant values for all the three antibiotics used)  which were shown in grey colour background selected as potent probiotics.

Finally, after above screening and characterization methods, only 5 strains of isolated lactobacillus were selected as potent probiotic shown below in table:6 and further determination of vitamin production by thin layer chromatographic methods, and Spectrofluro-photometric methods and HPLC  method were done.

FIG. 2: STANDARD GRAPH FOR ESTIMATION OF   RIBOFLAVIN BY SPECTROFLUROPHOTOMETRY

Like wise, unknown concentration of riboflavin in samples as follows: 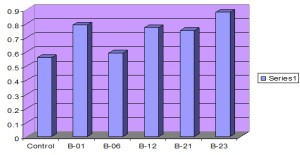 FIG. 3: COMPARISONS BETWEEN CONCENTRATION OF RIBOFLAVIN (µgm/ml) PRESENT IN SAMPLES AND CONTROL 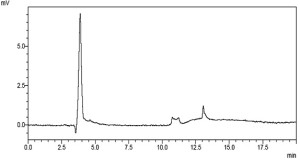 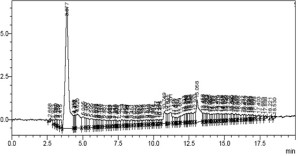 FIG. 5: CHROMATOGRAM SHOWS FOR SAMPLE B-01 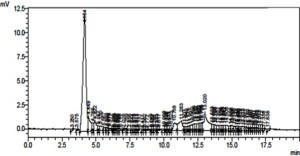 From the chromatogram obtained by RP-HPLC method, retention time of both standard and samples were same. This reveals riboflavin were producing by isolated strains of Lactobacillus. So, these strains were more beneficial to human.

CONCLUSION: Probiotics plays a vital role in giving the beneficial to human by its eminent activities like role of cholesterol reduction, in the treatment of irritable bowel syndrome, anti cancer activities , antibiotic associated diahorrea and many more.

So, from these experiments the potent probiotic strains from different sources of meat viz., B-01, B-06, B-12, B-21, B-23 were screened, isolated, characterized, antibiotic susceptibility tests before and after curing of plasmids reveals they were potent Probiotics. Determination of B-complex vitamins produced by these strains concluded, these strains having ability to produce only the vitamin riboflavin, which more important to human. The isolated Probiotics strain having the riboflavin production is warmth welcome to neutraceutical field.

ACKNOWLEDGEMENT: I gratefully acknowledge my sincere thanks to SBST, VIT University (www.vit.ac.in), where I performed this eminent work.