ABSTRACT: Background: Karanjin a furanoflavanoid from Pongamia pinnata (L.) Seeds, has gastroprotective, anti-arthritic properties rendering it a natural drug having prophylactic and therapeutic property. But, the effect of Karanjin on colitis till not known. Objectives: To evaluate the beneficial effect of karanjin for the treatment of experimental colitis. Method: Colitis were induced in the C57BL6 mice by oral administration of 2.5% solution of DSS in drinking water for 7 days. Karanjin (>98% pure) was administered in two different concentrations 100 and 200 mg/kg and 5-ASA (100 mg/kg) as reference for 7 consecutive days to the DSS induced colitic mice. On 8 day mice were sacrificed and degree of inflammation was assessed by Disease Activity Index (DAI), histology and biochemical estimation of myeloperoxidase (MPO), Nitric oxide (NO), malondialdehyde (MDA), Catalase (CAT), Superoxide dismutase (SOD), and reduced glutathione (GSH) level were measured. Result: Karanjin significantly and dose dependently ameliorate the macroscopic damage, histological changes such as cellular infiltration, tissue necrosis, mucosal and submucosal damage, reduce the activity of MPO. Depressed MDA and NO level and help in restoring the level of CAT, SOD and GSH to normal when compare to the experimental colitic group. Discussion: we demonstrated for the first time that karanjin proposed marked protective effect on experimental colitis through its anti-oxidation and immunomodulation which ultimately reduce the production of inflammatory mediator produced by the immune cells. Conclusion: Result of the present study indicates that karanjin has potential to cure colitis induced by administration of DSS.

INTRODUCTION: Ulcerative colitis (UC) and Crohn’s disease (CD) collectively called as inflammatory bowel disease (IBD) are serious and major complications of colon. These two diseases have some common characteristics but some genetic and clinical differences exist are - UC affects the mucosal lining of the rectum and colon while CD affects whole intestinal wall and may extend to whole gastrointestinal tract.

At present drugs used for the treatment of IBD are aminosalicylates, corticosteroids, immune modulatory drugs, antibiotics, anti-TNF-α antibody. 1 but, unfortunately these drugs have serious side effects, which will limit their use. DSS administration induces colitis having signs of diarrhea, wasting, rectal prolapse and rectal bleeding, histopathologically it produce colonic edema, granuloma formation, loss of normal architecture of the colon and colon shortening. 2

Immunologically DSS induces T-helper-1(Th-1) response by increasing production of IL-12, IL-1, TNF-α, and INF-γ which is similar to the inflammatory course observed in Crohn’s disease. 3 C57BL/6 mice develops chronic acute DSS colitis as compare to BALB/c mice because after DSS removal BALB/c mice recovered fastly from colitic conditions while even after DSS removal C57BL/6 mice develops chronic colitis and require 6-7 weeks for the recovery  4  so, in present study Balb/c mice were used.

Pongamia pinnata (L.) Pierre (Fabaceae; synonym Pongamia glabra Vent.), is popularly known as “Karanja” in Hindi, “Pungam” in Siddha. It is widely grown forest tree. Seeds of Pongamia pinnata contains 33–36% oil, which is known as Karanja oil and is traditionally used for treating various disease conditions such as rheumatic pain, flatulence, diarrhea and cough. 5 Leaves of Pongamia pinnata reported to have anti-inflammatory 6, Seeds have antioxidant 7, Anti-ulcer 8, anthelmintic 9 activity. Karanjin from Pongamia pinnata seeds has gastroprotective activity by inhibiting H+, K+- ATPase and oxidation 10 of gastric tissues. Owing to its various ethno-pharmacological properties, there is no report available in the literature on the screening of anti-colitis property of karanjin which is a major constituent of Karanja seed oil.

To the best of our knowledge, activity of karanjin against the DSS induced colitis was never been investigated. Therefore, the present study was planned, we explored effects of Karanjin in the treatment of DSS induced colitis and to investigate its effect on enzyme activities in colon tissue which is associated with the intestinal inflammation.

Female C57BL6 mice (17-25 g) were obtained from the animal house facility of National Institute of Nutrition, Hyderabad (Andhra Pradesh). Animals were housed in cages at room temperature (25 °C) with 12:12-h light-dark cycles. The animals were feed on standard pellets and water supplied ad libitum. Animals were acclimatised to the environmental conditions for 10 days before the start of the treatment and were randomized to the respective groups using body weight. The study was approved by the institutional animal ethics committee (IAEC/09/2013-14) which follows the CPCSEA guideline.

Mice of each group were monitored carefully every day to conﬁrm that they consumed an approximately equal volume of DSS-containing water 11.

The disease activity index (DAI) was calculated from following formula:

Severity of colitis was assessed daily using a DAI based on the scoring system of 12 DAI was determined on the basis of scores for body weight loss, stool consistency, and rectal bleeding. Scoring was performed according to the criteria described in the table.

In each experiment, the body weight was monitored every day. Loss of body weight was calculated as the difference between the initial and final weight. 13 on the  end  of  the  experiment,  mice  were  killed  and  the  colons  were  separated  from  the proximal  rectum,  close  to  its  passage  under  the  pelvisternum.

The colon length and weight was measured between ileocecal junction and the proximal rectum by using Vernier caliper (Mitutoyo, Japan) colon edema was calculated by weight/length ratio. The spleen were also obtained and their weight is measured. 14

To assess the severity of colitis, disease activity index (DAI) score and weight gain were monitored daily. The animals were scarified on 8th day, colons were immediately removed and ﬁxed in 10% buffered formalin, parafﬁn-embedded, sectioned, and stained with haematoxylin and eosin 15 All tissue sections were examined with a Trinocular microscope (S-500) fitted with CMOS camera and analysed with Biowizad 3.5 image analysis software (Japan), in a blinded manner by a skilled pathologist as described by Funakoshi 16 et al. 2012. Briefly, Grading index was as follows: inflammation severity (0: none, 1:mild, 2: moderate, 3: severe), inflammation extent (0:none; 1:mucosa, 2: mucosa and submucosa, 3: transmural), crypt damage (0: none, 1: basal one-third damaged, 2: basal two-thirds damaged, 3: only surface epithelium intact, 4: entire crypt and epithelium lost), and the percentage involvement in the ulcer or erosion (1:< 1%, 2: 1%–15%, 3: 16%–30%, 4: 31%–45%, 5: 46%–100%). The sum of the first 3 scores (inflammation severity, inflammation extent, and crypt damage) was multiplied by the score of the percentage involvement.

The colonic tissues were removed, homogenized and used for the determination of Nitric oxide (NO), Myeloperoxidase (MPO), lipid peroxidation, levels of reduced glutathione (GSH), Superoxide dismutase (SOD), and Catalase.

Change in optical density was measured at 460 nm. MPO activity was expressed as the amount of an enzyme necessary for the degradation of 1 μmol H2O2/min/100 mg tissue at 250C. 18

Procedure for nitric oxide determination (NO):

NO level is estimated as nitrite and nitrate by the Griess reaction after reduction of nitrate to nitrite by vanadium trichloride according to the method described by Miranda 19 et al., (2001). 0.1ml supernatant of tissue homogenate is mixed with 0.1 ml of vanadium (III) chloride. Then, 50 µl of sulfanilamide (2% w/v) solution and 50 µl of N-(1-naphthyl) ethylene diamine dihydrochloride (0.1% w/v) was added respectively, and incubated at 370C for 30 min. Optical density was measured at 540 nm against a blank. The concentrations were determined using a standard curve of sodium nitrate and the results were expressed as nmol/g wet tissue.

Data were expressed as means ± SEM. Statistical analysis was performed using graph pad prism software. The statistical significance of the data was evaluated by one-way analysis of variance (ANOVA) followed by Dunnett’s t- test. A value of P<0.05 was considered statistically signiﬁcant. 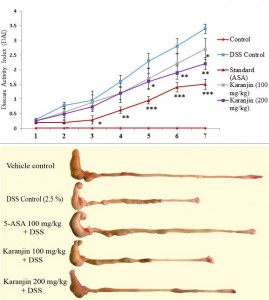 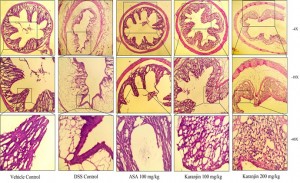 Effect of karanjin on the MPO activity, NO level:

Increased production of nitric oxide in intestinal mucosa observed in active colitis and in excess NO act as pro-inflammatory mediator. 25

Therefore, we investigated the effect of karanjin on NO production in mice with DSS induced colitis. NO level (Table 2) was significantly increase in DSS (48.21±6.23) control group as compared to vehicle (15.82±4.11) control group. Oral administration of karanjin (200 mg/kg) significantly (28.93±5.11, P˂0.01) dose dependently inhibited NO production in mice.

Effect of karanjin on lipid peroxidation:

Effect of karanjin on antioxidant enzymes:

DISCUSSION: In present research was particularly focused on the effect of Karanjin on DSS-induced colitis in mice, this model was widely used to screen potential drugs for treatment of colitis because of its similarity to human IBD particularly with Crohn’s disease. Karanjin and the reference drug 5-ASA were orally administrated to the C57BL/6 mice with colitis, then body weight change, stool consistency score was recorded every day.

Activated neutrophils produce reactive oxygen and nitrogen species which induces oxidative stress, and plays a significant role in the pathogenesis of IBD. 26 Inflammaogenic reactive oxygen metabolites includes hydrogen peroxide, superoxide radicals, hydroxyl radicals and nitric oxide in mucosal cells Induces inflammatory and immune responses which could directly or indirectly cause damage to the intestinal epithelial cells, disrupt the integrity of the intestinal mucosal barrier initiate an inflammatory signalling cascade and leads to severe impairment in experimental colitis. 27, 3 MDA is a product derived from the colonic oxidative stress. Increase in MDA activity causes cross linking between proteins and nucleic acid and cell toxicity. Studies demonstrate that toxic colitic injury, increase MDA level in rats/mice and treatment of such colitic injury decreases the MDA level in the colon.

Therefore; recruitment of neutrophils seems to be influenced by antioxidants. On treatment with Karanjin significantly increase the level of CAT and SOD as compare to the disease control group in a dose dependent manner when estimated at the end of the experiment. Glutathione (GSH), the most abundant cytosolic low molecular weight thiol synthesized by glutathione peroxidase from two molecules of ATP. The glutathione peroxidase provides protection against oxidative damage and detoxification of reactive chemicals by forming GSH, whichreacts with free radicals and form reduced glutathione which is nontoxic to host tissues. The decreased GSH level has been observed in a number of chronic and acute inflammations. 29 Karanjin significantly prevent the decrease in glutathione level.

Neutrophils infiltration is one of the most prominent histopathological features in the inflamed colonic mucosa in IBD. The MPO is an enzyme exist in neutrophils, which catalyses the formation of potent cytotoxic oxidants such as hypochlorous acid (HOCl) from chloride and hydrogen peroxide (H2O2) and N-chloramine, MPO activity reflects the degree of neutrophil infiltration 30 in intestinal inflammatory process and the reduction of MPO activity can be interpreted as a manifestation of the anticolitic effect of the test drug. Our research demonstrated that karanjin inhibit the increase of MPO activity in a dose dependent manner in DSS colitis.

NO is a potent inflammatory mediator because of its strong reactivity with superoxide leading to tissue damage by the production of peroxynitrite (ONOO-) 31 and the level of NO was determined by estimation of nitrite level.  Treatment with Karanjin showed significant inhibition in NO production probably by suppressing TNF-α production.

The spleen is an essential organ of the immune system. The spleen plays important role in modulation of the immune system by clearance of circulating apoptotic cells, differentiation and activation of T- cells and B- cells. 32 It holds a reservoir of blood. It is a centre of activity in the reticuloendothelial system. 33 Spleen may be enlarged because of increase in the number of apoptotic cells in response to the destruction of epithelial barrier which cause the entry of foreign material or intestinal bacteria into circulation. The relation between spleen enlargement and colitis is not yet studied.

In our study, we observed significant decrease in the spleen enlargement in 5-ASA and karanjin (200 mg/kg) treated groups. This response due to immunomodulation by karanjin.

CONCLUSION: Karanjin isolated from Pongamia pinnata seed oil prevented progression of DSS induced colitis in mice probably by inhibiting inflammatory cell recruitment and production of oxidant. Thus, these findings suggest that karanjin may be a promising agent for treatment of intestinal inflammation.

CONFLICT OF INTEREST: The authors have declared that there is no conflict of interest.