Withania somnifera L. Dunal (Family: Solanaceae) is extensively used in traditional Indian medicine as a nerve tonic and is thought to improve memory. We assessed the acetylcholinesterase (AChE) inhibitory activity and kinetics of an aqueous extract of W. somnifera root, in the context of its potential role in regulating the levels of acetylcholine (ACh) in the brain. The assessment of cholinesterase inhibition was carried out using a colorimetric method based on Ellman’s reaction. Our findings demonstrate that W. somnifera extract significantly inhibited AChE in a concentration-dependent manner. A 1mg/mL extract concentration resulted in an 86% inhibition as compared with control. The IC50 value was 0.15mg/mL calculated from the equation of the percentage inhibition curve for the test extract. The Lineweaver-Burk plot indicated that the extract followed mixed non-competitive inhibition kinetics. We conclude that the mode of action exhibited by the aqueous extract of W. somnifera root has a potential therapeutic application that might be beneficial in improving memory and other cognitive functions associated with the cholinergic system.

INTRODUCTION: Alzheimer’s disease (AD) is the most common form of dementia, which affects more than 37 million people worldwide 1. AD is a progressive, degenerative disease characterized by a range of features including memory loss, language deterioration, poor judgment, visuospatial disorientation, ideational and ideomotor apraxia, akinesia and mutism 2. Patients with AD often have cholinergic deficits in association with the disease. The functioning of the brain cholinergic system, which is involved in attention and memory, declines during normal aging and is further affected in AD 3, 4. Current drugs for the symptomatic treatment of dementia are aimed at enhancing the associated cholinergic deficit by inhibiting AChE, an enzyme which catalyses the hydrolysis of the neurotransmitter acetylcholine (ACh).

Inhibiting the activities of AChE increases the concentration of the neurotransmitter with positive effects on cognitive function 5. Inhibition of AChE also serves as a strategy for the treatment of not only AD but also senile dementia, ataxia, myasthenia gravis and Parkinson’s disease 6-8. There are a few synthetic medicines, e.g. tacrine, donepezil, rivastigmine and the natural product-based galantamine for treatment of cognitive dysfunction and memory loss associated with AD 9. These compounds have been reported to have adverse side-effects including hepatotoxicity, gastrointestinal disturbances and problems associated with bioavailability which necessitates the interest in finding better AChE inhibitors from natural resources 10-13.

Plant material and extraction: The root parts of W. somnifera were collected from a local herbalist in India. The root parts were verified and authenticated by Dr. George Wake, School of Biology, Newcastle University, United Kingdom and voucher specimens of plant root are deposited in the herbarium of the Medicinal Plant Research Group, Newcastle University, UK. The roots were air dried before grinding to powder consistency using an electric grinder. 1gm of powdered root was infused in freshly boiled de-ionised water (1:50w/v) for 25 min. The infusions were left to cool to room temperature and centrifuged (12000 rpm, 15 min). The supernatant was re-centrifuged (12000rpm, 10 min). 1mL aliquots of the supernatant were freeze dried. The freeze dried aliquots were reconstituted in deionised water prior to assay.

Cholinesterase assays: An assessment of cholinesterase inhibition was carried out in flat-bottom 96-well microtitre plates using the colorimetric method of Ellman et al., 19 as adapted by Okello et al., 20. A typical run consisted of 5μL of bovine AChE solution, at final assay concentrations of 0.03 U/mL; 200μL of 0.1 M phosphate buffer pH 8; 5μL of DTNB at a final concentration of 0.3mM prepared in 0.1 M phosphate buffer pH 7 with 0.12M of sodium bicarbonate; and 5μL of the test extract. The reactants were mixed and pre-incubated for 15 min at 30°C. The reaction was initiated by adding 5μL of ATChI at a final concentration of 0.5mM.

As a control the inhibitor solution was replaced with buffer. The control was assayed in triplicate. To monitor any non-enzymatic hydrolysis in the reaction mixture two blanks for each run were prepared in triplicate. One blank consisted of buffer replacing enzyme and a second blank had buffer replacing substrate. Change in absorbance at 405 nm was measured on a Thermo Labsystems Multiskan (Ascent software version 2.6), 96-well plate reader for a period of 6 min at 30 °C.

Determination of dose response curve and kinetic parameters: The concentration of W. somnifera extract that inhibited the hydrolysis of substrate by 50% (IC50) was determined by monitoring the effect of various concentrations ranging from 0.062 to 1mg/mL (final assay concentration). Each concentration was run equivalent to n = 6. Dose-response curves were fitted to the data points using Microsoft Excel software and IC50 value was calculated from the standard curve equations. For inhibition kinetics studies, the enzyme was pre-incubated with different substrate concentrations ranging from 0.062mM to 5mM. The data for substrate kinetics were analyzed using Lineweaver–Burk methods for the determination of Km and Vmax.

RESULTS AND DISCUSSION: The results showed that an aqueous extract of W. somnifera root inhibited AChE in a concentration-dependent manner. The maximum inhibition (86.7%) was observed at the final assay concentration of 1mg/mL. The IC50 value calculated from the equation obtained from the log concentration versus inhibition curve was 0.15mg/mL (Figure 1). As the intersection of the lines occurred in second quadrant of the Lineweaver-Burk plot the results indicated that with increasing concentrations of the aqueous extract of  W. somnifera root, the Vmax value decreased and the Km value remained comparatively unchanged at different concentration (Figure 2 and Table 1), which indicated that the extract followed mixed non-competitive inhibition kinetics. 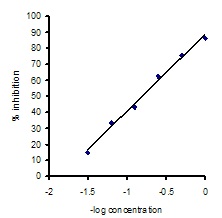 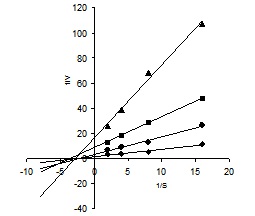 There are some reports which suggest that AChE may play an important role in the development of senile plaques by accelerating amyloid beta (Aβ) deposition. It has been shown that AChE forms a stable complex with senile plaque components through its peripheral anionic site which might be involved in accelerating fibril formation 21, 22. It has also been suggested that mixed or non-competitive mode inhibitors could be the best candidates for inhibiting AChE-induced Aβ aggregation due to their ability to bind to the peripheral site 23.

Another study suggested that the Aβ aggregating property of AChE during the early stages of AD can be inhibited by mixed or non-competitive types of inhibitors 24, suggest that this might represent an alternative therapeutic option, as these compounds might be able to ameliorate cognitive deficiency by inhibiting Aβ aggregation. These observations indicate a putative mechanism by which the aqueous extract used in the current study may have therapeutic potential

Although several synthetic cholinesterase inhibitors such as tacrine, rivastigmine, and donepezil are being used for management of conditions such as AD, their side effects have become increasingly noticeable 12, 13. Due to this reason there is a need for safer, more tolerable, more bioavailable and non toxic anti-cholinesterase drugs. An animal study reported that, W. somnifera dried roots (300-500mg) when taken in the form of standardized methanolic extract containing 1.5% withanolides is generally considered safe 25.  The composition of the aqueous extract used here has not been determined, but it would represent a form of the extract commonly used in traditional herbal medicinal use. It is likely that the extract may contain some of those compounds described above, but this requires further investigation.

CONCLUSION: In conclusion, the results of this study show for the first time that an aqueous extract of W. somnifera root exhibited mixed non-competitive inhibition kinetics and acts as a potent inhibitor of AChE. AChE inhibitory compounds from traditional remedies such as this root extract may be useful in improving memory and other cognitive functions associated with the cholinergic system.

ACKNOWLEDGMENTS: We would like to thank Fiona MacLachlan for assistance with freeze-drying the extract.