INTRODUCTION: Plants possess various medicinal properties which can be used for the treatment of several diseases. Medicinal properties of the plants are determined based on the presence of the bioactive constituents. Plants have been used in medicines since time immemorial. Several herbs which possess curative properties have been found recorded in “Charak Samhita” and “Sushruta Samhita” 1. The outward reversal of tendency from western to herbal medicine is because synthetic drugs have always shown contrary reactions and other adverse side effects. This has led to the belief that natural products are safe because they are more symphonic with biological systems 2.

However, prominent side effects of such drugs are the main reason for an increasing number of people seeking alternative therapies that may have less severe or no side effects 3, 4.

Liquid chromatography-mass spectrometry (LC-MS) is a technology of emerging importance in the field of therapeutic drug monitoring (TDM) because development of commercial immunoassays for new TDM applications is sparse at best. LC-MS approaches have shown tremendous potential in the field of TDM 5. LC-MS (Liquid chromatography-mass spectrometry) technique has become the most widely used tool to identify the bioactive compounds. The analyses consist of sample preparation, chromatographic separation, mass spectrometric detection, and data processing is slightly typical, in which the sample must be pure to reduce the specificity of detection. A commonly used sample preparation method in LC/MS analysis is still traditional liquid-liquid extraction (LLE), although the method is time-consuming and produces great amounts of solvent waste 6.

Another commonly used method, solid phase extraction (SPE), uses a sorbent material containing a solid phase and a flowing liquid phase to isolate a compound or certain type of compounds from a liquid sample. The sample is loaded into a cartridge, undesired compounds are washed away, and the analytes are eluted with a different solvent 7. Thus, the present results revealed the presence of several bioactive compounds which helps to isolate the compounds for further evaluation.

There are six different types of plants selected to formulate the polyherbal formulation. All the plants possess various activities such as anti-inflammatory, antioxidant, antidiabetic, anti-microbial, antifungal, etc. The polyherbal formulation is composed of the bark of Ficus religiosa, the root of Smilax chinensis, seeds of Nigella sativa, the fruit of Emblica officinalis, Terminalia chebula and Terminalia bellerica.

In the present study, we investigate the bioactive compounds which present in the ethanol, acetone and benzene extract of the polyherbal formulation through liquid chromatography-Mass spectroscopy analysis. The result of the present study will provide scientific evidence to the researchers to carry out further research.

Collection of Plant Material: The bark of Ficus religiosa, the root of Smilax chinensis, seeds of Nigella sativa, the fruit of Emblica officinalis, Terminalia chebula and Terminalia bellerica were collected, chopped, shadow dried and powdered.

Extraction of the Plant Material: Polyherbal formulation has been extracted separately using three different types of solvents chosen based on the polarity. The solvents are ethanol, acetone and benzene for sample extraction and to compare the compounds present in it. The plant powder was extracted by the Soxhlet extraction method and evaporated to dryness using a rotary evaporator. All dried extracts were stored at 4 ºC until analysis.

Liquid chromatography-mass spectrometry (LC/MS) is performed on sample types that are thermally unstable, large, polar, ionic or non-volatile, or which need to be derivatized. Typical LC/MS samples include nucleotides, peptides, steroids, hormones, dyes, fatty acids, and alcohols. As a result, LC/MS is preferentially used in pharmacokinetics, proteomics, metabolomics, lipidomics, and drug development.

Liquid chromatography is first used to separate sample components so that their relatively purified forms can be introduced into the mass spectrometer. Electrospray ionization (ESI) or atmospheric pressure chemical ionization (APCI) is typically applied to generate charged ions from the sample, and it is these ions that pass into the mass analyzer. The identity of the target ion is determined by comparing its mass: charge (m/z) ratio against a spectral database such as MassBank, METLIN, and mzCloud. Total LC/MS sample preparation must take into consideration both the mobile phase (containing the analyte) and stationary phase (packing material or support). Soluble and insoluble matrix components should also be considered and whether they might interfere with the analyte’s final elution from the column. It goes (almost) without saying that the mobile phase generation should always make use of the highest purity water, solvents and buffers available because each of these components contributes to background noise. If a mass spectrogram features a high level of background noise, limits of detection and quantitation will be compromised. The bioactive compounds of the different extracts of the polyherbal formulation were identified through LC-MS analysis.

RESULTS AND DISCUSSION: Liquid chromatography-mass spectrometry (LC-MS) has emerged as a preferred tool for measuring the small molecule components of cellular metabolism. LC-MS enables simultaneous analysis of dozens to hundreds of chemical species 9. Liquid chromatography-mass spectrometry (LC-MS) is a high-tech detection method based on high-capacity chromatographic separation and high-sensitivity MS, which is mainly used for the analysis and detection of trace components. LC-MS can be used for the accurate qualitative and quantitative analyses of bioactive components (Yang-Shan, 2016). LC-MS analysis showed the presence of the compounds in the polyherbal formulation. The biochemical constituents such as (4-chloro-2-methylphenoxy) acetic acid, 7-hydroxy-3-methyl-flavone, 3- hydroxy- 3’, 4’- Dimethoxyflavone, Cinnamic acid-O hexoside, Quercetin-3-O-(6’’-3-hydroxy-3-methyl glutaryl)-a-galactoside, 2’,5-Dimethoxyflavone, capreoside, and daidzin were present in the ethanol extract of polyherbal formulation. LC-MS analysis of the acetone extract of the polyherbal formulation showed the biochemical constituents such as chrysin, 3’,7-Dimethoxy-3-hydroxyflavone, 7-hydroxy, 3-methylflavone, 3’-O-Methylorobol and 4-Hydroxy-2’,3’,4’,6’-tetramethoxychalcone. And the benzene extract of the polyherbal formulation consists of Rhamnetin, Chrysoriol-hexose, rotenone, and Kaempferol- 3- Glucoside- 2”- p- coumaroyl. The chromatograms of ethanol, acetone and benzene extract of the polyherbal formulation were shown in Fig. 1, 2 and 3 respectively. The structure of the compounds as shown in Table 1. 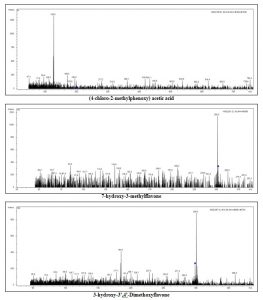 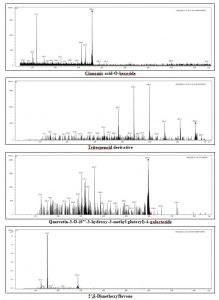 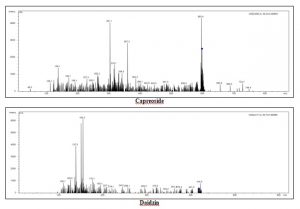 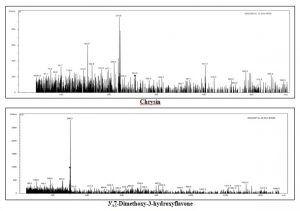 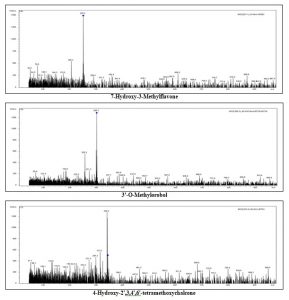 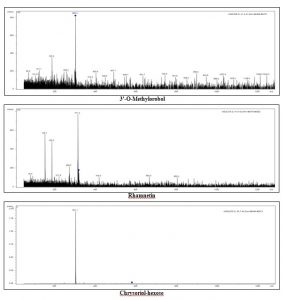 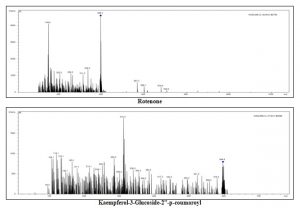 TABLE 1: CHEMICAL STRUCTURE OF THE COMPOUNDS IDENTIFIED IN THE POLYHERBAL FORMULATION

CONCLUSION: Thus, the present results revealed the presence of several bioactive compounds which helps to isolate the compounds for further evaluation.

ACKNOWLEDGEMENT: The Authors thank the Management, the Principal for providing necessary facilities to carry out the research, and Department of Science and Technology, Science and Engineering Research Board for financial support.