ABSTRACT: Objective: Ethyl para toluene sulfonate is a genotoxic impurity and the current work’s primary objective is to develop a hyphenated and highly sensitive LC-MS method for the determination (EPTS) in Perindopril tert-butylamine. Method: EPTS was determined by LC-MS method in selective ion monitoring mode (SIM) using Atlantis T3 (150×4.6mm) 3.0 µm column. 0.01M ammonium acetate is utilized as buffer. Gradient elution was employed and the Mobile phase A is composed of mixture of buffer and methanol in 70:30 (v/v) ratio along with Mobile phase B made up of buffer and methanol in 5:95 (v/v) ratio. The gradient program (T/%B) was set as 0/5, 2.50/5, 7.00/50, 12.00/70, 18.00/95, 21.00/95, 24.00/5, 30.0/5. Results: The LOD and LOQ values found for EPTS were 0.018 µg/mL and 0.054 µg/mL. The method has accuracy within 98.1-103.5% for the analyte. Developed method validated as per International Conference on Harmonization guidelines. Conclusion: Developed LC-MS method in SIM mode can be applied as a good quality control tool for quantitation of EPTS impurity at very low levels in Perindopril tert-butylamine.

INTRODUCTION: Perindopril is a member of the angiotensin-converting enzyme (ACE) inhibitors class, which prevent the conversion of angiotensin I to angiotensin II resulting in a reduction of angiotensin II in the plasma and increasing vasodilator bradykinin level, being successfully utilized in numerous cardiovascular diseases, including treatment of hypertension, heart failure and ischemic heart disease 1, 2. It acts as a prodrug, the ester being hydrolyzed to form the diacid perindoprilat, a potent, long-acting metabolite 3-5.

Perindopril tert-Butylamine is chemically known as (2S, 3aS, 7aS) - 1 - [(2S) - 2 - [[(1S) - 1 - (Ethoxy carbonyl) butyl] amino] - propionyl] octahydro-1Hindole - 2 - caroxylatic acid, tert-Butylamine. Active pharmaceutical Ingredients were prone to contain different impurities that may arise from starting materials, reagents employed for the synthesis, and by-products in the synthetic process.

Some of these impurities are mutagenic or carcinogenic nature, which makes these impurities to consider critically eliminating them from the final drug product. Often different synthetic process-related modifications are employed to remove these impurities, yet it became impossible to completely eliminate the impurities from the final drug substances. According to the guidance of drug regulatory authorities it is crucial to regulate the level of genotoxic impurities in the drug substances based on the daily dose 6-10. Sulfonic acids such as methane sulfonic acid (mesylate), benzenesulfonic acid (besylate) and p-toluene sulfonic acids (tosylate) are often used during manufacture of pharmaceuticals, either as counter-ions to form a salt, as acid catalysts or as the result of protecting group removal during the synthesis. However, the presence of any alcohol either in any of the stages of synthesis, or the in the crystallization stage of the salt may cause the formation of sulfonic acid esters which are considered to be potential alkylating agents 11, 12.

Ethyl para toluene sulfonate (EPTS) is a process-related impurity that has been characterized as potentially genotoxic impurity (PGI) and it has the regulatory limit of intake at 1.5µg/day. Potentially genotoxic impurities are well known to cause cancers in rats and mice via genetic mutations and DNA alkylation strategies. Regulatory authorities all over the globe are periodically publishing the guidelines for the controlling of genotoxic impurities. These guidelines describe the various strategies to minimize the level of impurities in drug substances and also to reduce the risk of patient exposure to these cancerous substances. The European Medicines Agency's (EMA) Committee for Medicinal Products for Human Use (CHMP) specified a maximum daily exposure upper limit of 1.5µg/person/day for EPTS 13-17.

In accordance with the amplifying concerns of regulatory authorities regarding the control of genotoxic impurities in pharmaceuticals, there has been a development in the analytical methods for the identification and quantitation of genotoxic impurities. Bearing the practical issues integrated in the various reported methods and growing regulatory concerns regarding the estimation of genotoxic impurities in mind, an effort was made in developing the direct, specific, cost effective, accurate and highly sensitive LC-MS/MS method for the determination of ethyl para toluene sulfonate (EPTS) in perindopril tert-butylamine active drug substance.

Validation Study: The developed method for the determination of EPTS in Perindopril tert-Butylamine was validated according to the ICH guidelines. The linearity was evaluated by preparing and analyzing six injections of 0.05-0.25 µg/mL for EPTS. The least-squares linear regression analysis was performed to determine slope, intercept, and regression coefficient. System precision of the mass spectrometric response was established by making six injections of the standard solution. By displaying precision, with the injection of lower concentrations of analyte in six replications, the LOQ and LOD were determined.

The LOQ and LOD were calculated on the basis of the lowest concentration of compound that gives %RSD < 10 (for LOQ) and %RSD <15 (for LOD). The method precision was evaluated by spiking each analyte and determining the %RSD.

Standard Solution Preparation: 0.5 mg/mL concentrated stock solutions of the EPTS were prepared by dissolving the compounds in acetonitrile. 0.01 mg/mL diluted stock solution was prepared by diluting 1mL of the 0.5 mg/mL solutions to 50 mL with acetonitrile. The working standard solutions, 0.05µg/mL, were prepared just before injection by diluting 1mL of the 0.01 mg/mL solution in acetonitrile to 200 mL with sample diluents (35:65, acetonitrile/water, v/v). The working standard solutions were always prepared and injected immediately.

Sample Preparation: Perindopril tert-Butylamine sample solution of 50 mg/ml concentration was prepared by accurately weighing about 50 mg of the drug substance into an HPLC vial and adding 1.0 mL of sample solvent, shaking to dissolve, and immediately injecting.

Optimization of Sample Preparation: In GTI analysis sample preparation is a key exercise that can have an effect on analyte stability, sensitivity, recovery, and matrix effect in trace analysis. Different diluents were evaluated with respect to extraction efficiency and chromatography. Aceto-nitrile was found to have good solubilization capacity for both the drug substance and analyte. Acetonitrile alone was not found suitable due to lower responses of the analytes and bad peak shape. Premix of acetonitrile and water in different ratios were evaluated. Good response, proper peak shapes, and good recovery values were observed for the analyte EPTS with the premixed solution of 35:65, acetonitrile/water, and (v/v).

Column Selection and Separation: Numerous kinds of stationary phases were evaluated to achieve appropriate separation of the analyte peaks from the drug substance peak. It was important to attain proper separation as the concentration of drug substance was high leading to broad peak. Various columns like Zorbax Rx C18, Atlantis T3, and Kromasil C18 of different dimensions were evaluated. Based on the less response and low resolution of analytes with the drug substance peak, it was found that the columns Zorbax Rx C18 and Kromasil C18 were not suitable. On Atlantis T3 column of dimensions 150 mm×4.6 mm internal diameter, 3.0m, separation and response for EPTS was found to be good. On this column the analyte was well retained and separated from the drug substance peak of Perindopril. Better retention and improved peak shapes were observed due to the exceptional amalgamation of bonding and end-capping on Atlantis T3 column (advanced T3 bonding). The diverse composition of mobile phase using 0.1% formic acid (v/v in water), 0.1% acetic acid (v/v in water), and ammonium formate, with acetonitrile and methanol were studied.

Decent response and separation were spotted with the combination of ammonium acetate buffer and methanol in isocratic and gradient elution modes. The optimum separation of EPTS and drug substance peaks were noticed in gradient elution mode. The flow rate of 1mL/min was maintained, and the column was thermostated at 30 °C to avoid any shift in retention time. However, prior to electrospray, ionization flow rate was reduced to 0.2 mL/min using a splitter. The retention time of EPTS was observed to be about 9 min. Peaks were well separated from the drug substance peak and Gaussian.

Peak corresponding to Perindopril tert-butylamine eluted at around 16 min. Due to adequate sepa-ration of analyte and drug peaks, only the analyte EPTS was allowed to enter the mass detector by venting the drug substance peak using a switching valco valve.  In this way matrix effect due to high concentration of drug substance was avoided and only the peaks of interest were monitored.

Optimization of Mass Spectrometric Para-meters: Choosing a detection method is the most important part of pharmaceutical analysis. Due to the insufficient sensitivity and specificity, for the trace analysis of EPTS with the HPLC-UV and GC-FID methods, sensitive and specific mass spectrometric detection of tandem LC/MS/MS was evaluated in SIM mode.

This mode permits significant enhancement of selectivity and sensitivity for screening and quantification. In positive SIM mode, EPTS ion mass peak was seen at 218 corresponding to [M + 18]+ = [M+NH4]+. The LC-MS/MS SIM chromatograms are shown in Fig. 1 and 2. 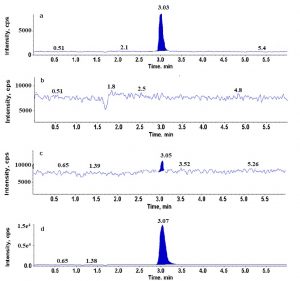 TABLE 1: VALIDATION DATA FOR THE DETER-MINATION OF EPTS

Validation of Method: ICH guidelines 14 were followed for the validation of the developed method in terms of specificity, linearity, accuracy, limit of quantitation (LOQ), limit of detection (LOD), precision along with robustness, and the validation data were presented in Table 1.

Specificity: The specificity of the LC-MS methods was signposted by screening the m/z peak in [M+NH4] peak as 218 for EPTS.

Linearity: The linearity of EPTS was satisfactorily demonstrated with a six-point calibration graph between 0.05 and 0.2µg/mL (0.05–2.0 ppm with respect to a sample concentration of 50 mg/mL). Correlation coefficients for all analytes were >0.998. The results for linearity, tabulated in Table 2 and linearity graph disclosed in Fig. 3. 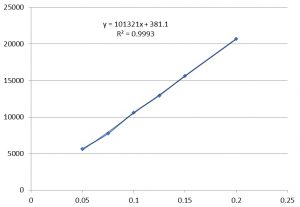 Accuracy: The accuracy was demonstrated by the percent recovery of EPTS from the drug substance. Satisfactory recoveries of 98.1-101.5% for 0.18 µg/mL (six determinations, %RSDs below 2.0%) were obtained, which are satisfactory at such low levels and the results enumerated in Table 3.

Limit of Quantification and Detection: The LOD and LOQ were calculated from S/N ratio data generated from six injections of EPTS with respect to sample concentration of 20 mg/mL. The LOD and LOQ values observed for EPTS were 0.018 µg/mL and 0.054 µg/mL and are disclosed in Table 4.

Precision: By running LOQ solutions in LC for six times, method precision was demonstrated. The values of RSDs for areas of each EPTS were calculated. The % relative standard deviation (%RSD) was found to be below 2% for both the analytes in system precision and the data given in Table 5.

Robustness: The developed method robustness was certified by receiving the resolution between drug and analyte to be greater than 2.0, when the organic solvent ratio in both mobile phases A and B (±2%), mobile phase flow rate (±0.2 mL/min), and column temperature (±50C) were calculatingly varied.

CONCLUSION: The proposed method is a direct tandem mass spectrometric method for screening and quantification of EPTS in the Perindopril tert-butylamine drug substances. The method utilizes SIM mode for quantitation which provides better selectivity and sensitivity.

The described analytical method is cost-effective, direct, accurate and convenient quality control tool for determination of EPTS in Perindopril tert-butylamine.

The advantage of this method lies in its improved sensitivity and simpler sample preparation technique to those previously reported methods. SIM mode allows drastic reduction or elimination of matrix effects that limits the accuracy and detection limits. This method can be further studied for its application to other drug substances.

ACKNOWLEDGEMENT: The author acknowledges the support of the co-author Suryakala Duvvuri, B. M. Rao, in conducting the research work and developing this manuscript.

CONFLICTS OF INTEREST: Authors disclose no conflict of interest.