ABSTRACT: The plants Portulaca oleracea and Gomphrena globosa belong to the order Caryophyllales, and their flowers are known to produce betalains. The biosynthesis of betalains involves various intermediate molecules such as catecholamines or biogenic amines. Catecholamines include dopamine, adrena-line (epinephrine), and noradrenaline (norepinephrine) and are normally believed to be released in response to stress. They are derived from the amino acid tyrosine, with L-DOPA being formed as an intermediate. Catecholamines and their predecessors (tyrosine and L-DOPA) have many medicinal applications and are used in the treatment of Parkinson’s disease, hypotension, low cardiac output, glaucoma, and allergic conditions like asthma, to name a few. These biogenic amines and their predecessors have been found in many plant families. Their presence has been reported in Portulaca oleracea and Gomphrena globosa. The current study focuses at the identification and quantification, by LCMS/MS, of the different catecholamines or their predecessors that are present in Portulaca oleracea and Gomphrena globosa.

INTRODUCTION: Aromatic biogenic amines are basic nitrogenous compounds formed mainly by decarboxylation of amino acids or by amination and transamination of aldehydes and ketones. In human and animal cells, they play an important role as neurotransmitters, sources of nitrogen and predecessor for the synthesis of molecules like hormones, alkaloids, nucleic acids and proteins. Biogenic amines have been reported to occur in 44 plant families 1. Though biogenic amines and their predecessors, as well as their derivatives, have been reported to occur in plant families, no important metabolic role has been assigned to them 2.

Their role and action are partly understood. Many plant species in the human diet contain biogenic amines and are reported to be active principle ingredients of many medicinal plants 1. Plants belonging to the order Caryophyllales are known to produce tyrosine-derived pigment betalains, an alternative to anthocyanin 3-5. Most families under the order are reported to produce betalains 6, 7. The metabolic pathway of betalains found in plants suggests that they are converted to L-Dopa and tyrosine 8.

L-Dopa and tyrosine have multiple metabolic fates, one of which is their conversion to medicinally important molecules, dopamine, and epinephrine. L-DOP Aquantitation in different Mucuna sp., Vicia faba, and Abrus precatorius has been reported 9-12. A method for detection of L-DOPA from different parts/tissues from varieties of Vicia faba by LCMS has been reported 13, 14. Dopamine and other alkaloids from Papaver rhoeas, callus of Celosia cristata and Celosia argentea var. plumosa have also been reported 15- 17. Screening of plants belonging to the order Caryophyllales has reported the presence of catecholamines, dopamine and epinephrine, in flowers of P. oleracea and inflorescence of G. globosa 18. Catecholamines are reported in callus tissue of P. grandiflora. Dopamine and norepinephrine has also been quantitated from P. oleracea plant by capillary electrophoresis. The current work focuses on quantitation of catecholamines, from flowers of P. oleracea and inflorescence of G. globosa, by LCMS/MS.

Sample Preparation: Inflorescence of Gomphrena globosa, the flower of Portulaca oleracea were used for preparing extracts for the study. The plant material was collected from the garden of Ramnarain Ruia College, Matunga. Fresh samples were used for preparing the extract. Two types of extracts were made: Acidic and Methanolic. The acidic extract was made by macerating 2 gm of plant material in 1 ml of 0.1N HCl, and the volume made upto10ml with methanol. The methanolic extract was made by crushing 2 gm of plant material in a clean mortar and pestle in 10 ml of methanol. Both the samples were kept for overnight extraction and filtered through a Whatman filter paper no. 41 the next day. The samples were then stored at 4 °C until further use.

Standard Preparation: 10 ml of the1000 ppm stock solution of the standards; L-tyrosine, L-DOPA, Dopamine, and Epinephrine; were prepared. The standards were dissolved in a minimum quantity of 0.1 N HCl, and the volume was made up to 10 ml with methanol.

The gradient program is given in Table 1. The flow rate was maintained at 0.5 ml/min; injection volume was 20 μl, and the column temperature was maintained at 30 °C. Run time for the analysis was kept 12 min. The quantitation was carried out using LCMS triple quadrupole (LCMS-8040).

LCMS-8040, equipped with the electrospray ionization (ESI) source, was operated in positive ionization mode. Nitrogen gas was used as nebulizing and drying gas at 3.0 L/min and 15 L/min, respectively. The detailed source parameters are given in Table 1.

Argon was used as collision gas maintained at 230 kPa. The Multiple Reaction Monitoring (MRM) transitions were optimized using auto MRM optimization function of Lab Solutions software for individual analytes. The software automatically optimizes the CE to form a specific product to get a stable and maximum response. Such 3 products were optimized with different CE for each analyte. The other MS voltages were optimized to get a maximum response of all analytes. The optimized voltages and MRM parameters are given in Table 2. The calibration levels of standards were prepared from 10 ppb to 1000 ppb. A batch of calibration levels was acquired, followed by the samples for quantitation. The linearity coefficient (r2) was achieved more than 0.99. The quantification was carried out through Lab Solution software with appropriate dilution factors of sample preparation. The calibration curves are represented in Fig. 1.

Statistical Analysis: Statistical analysis was performed using SPSS 16.0 software. Mean values were compared using ANOVA. A probability P-value of ≤0.05 (P≤0.05) was considered statistically significant. In Table 3, given in results, mean values followed by the same alphabet in superscript (a, b, c, d....) within a column are not significantly different 19, 20.

The concentration of catecholamines as determined from the samples is represented in Table 3. Since two different extraction methods have used, a comparison was made across the two methods for each analyte or component from the two plants separately and then statistically validated using SPSS 16.0 software. The highest content of catecholamines and predecessors was reported in methanolic extracts of G. globosa, whereas for P. oleracea acidic extracts were found to be better. The highest content of L-tyrosine (2673.24 ppb) was reported in G. globosa, whereas L-DOPA (68.18 ppb), dopamine (3101.15 ppb), and epinephrine (8801.99 ppb) were present in higher concentrations in P. oleracea.

Since, the predecessors were low while catecholamines were in comparatively higher con-centration in P. oleracea it indicated that the predecessors were most likely directed maximally towards the synthesis of catecholamines. The fate of L-DOPA, wherein it can be converted to a variety of metabolites like epinephrine, betalamic acid, berberine, morphine, codeine, and many others, has been reported 3. The presence of dopamine from leaves and stem of P. oleracea is already reported 21. 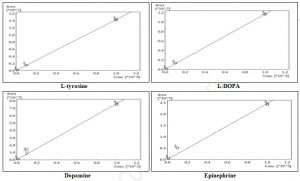 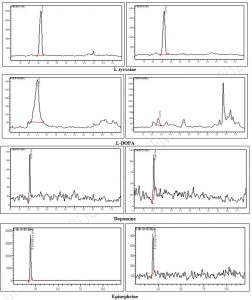 FIG. 2: CHROMATOGRAMS FOR CATECHOLAMINES AND THEIR PREDECESSOR FROM ACIDIC EX-TRACTS OF P. OLERACEA FLOWERS AND METHANOLIC EXTRACTS OF G. GLOBOSA INFLORESCENCE

N.D: Not detectable. The results were statistically validated using SPSS 16.0 software at a significance level of 95%.

ACKNOWLEDGEMENTS: The authors are grateful to Shimadzu Analytical India Pvt. Ltd (Mumbai, India) for permitting the LC-MS/MS work be carried out at their lab.

We are thankful to Dr. Ajit Datar, Senior consultant, Shimadzu Analytical India Pvt. Ltd (Mumbai, India) for guiding us through the course of this work. We appreciate the efforts put infor LC-MS/MS by Dr. Bhaumik Trivedi, Shimadzu Analytical India Pvt. Ltd (Mumbai, India). The authors are thankful to the Principal, Ramnarain Ruia Autonomous College, for the constant support and encouragement. We also thank the Head of the department and the teaching and non-teaching staff of the Department of Bioanalytical Sciences and Department of Botany for the help provided in the successful completion of this work.

CONFLICTS OF INTEREST: The authors declare that there are no conflicts of interest regarding the publication of this paper.