ABSTRACT: The majority of the drugs that are available in the market which are intended for activity in the central nervous system, are not capable of being transported across the Blood-brain barrier. The nasal route of drug administration is one of the most promising routes of drug administration that can permeate the drug through BBB. The permeability of drugs across the BBB is depending on the physicochemical properties of the drugs. Drugs with molecular weight lesser than 600Daltons and partition coefficient (Log P) within the range of 1.5-2.7 might pass through the BBB. Nanocarriers are capable of getting drugs with higher molecular weight transported across the BBB. Incorporating the drug into these carriers can facilitate the transfer of drugs across BBB. SLNs and NLCs are the most prominent carrier of drugs that can be employed for the transfer of drugs to the CNS. The drugs, when administered through nasal route, are carried across the BBB mainly through two major pathways, they are olfactory pathway and trigeminal pathway. The main disadvantage of nano carrier-based drug delivery is increased toxicity level; this is mainly because these carriers might not be removed from the brain, and this will get accumulated and thereby can cause toxicity. This review is focusing on the mechanism of drug transfer to the brain through the nasal route, the pathways involved, the nature of BBB, features of SLNs and NLCs, commonly employed excipients for the preparation of both and drugs that are administered using these carriers.

BBB protects CNS in normal physiological and pathological conditions. The BBB provides a separation between the nervous tissue of the brain and the spinal cord with the remaining part of the body. BBB isolates the brain from fluctuations in nutrients, hormones, metabolites, and other blood constituents present in the circulation. BBB is an important feature for the maintenance of the microclimate of the CNS and thereby to maintain secure neuronal transmissions 2, 3, 4, 5.

The most challenging part of drug targeting to the brain is permeating through the BBB. This is mainly due to the anatomical and physiological characteristics of the BBB.

More than 98% of the drugs intended for the CNS activity are impermeable to BBB. The permeability of drugs across the BBB is depending on the physicochemical properties of the drugs. Drugs with molecular weight lesser than 600 Daltons and partition coefficient (Log P) within the range of 1.5-2.7 might pass through the BBB 6, 7. The permeation of drugs and other materials from blood circulation to the brain is limited by BBB along with it BBB contains some transporters, mainly P-glycoprotein (P-gp) efflux transporter limits the entry of drugs to the CNS 8. This is creating difficulty to researchers in developing formulations for effective treatment of many CNS disorders such as Alzheimer's disease, Parkinson's disease, epilepsy, etc. Researchers have developed many invasive and non-invasive methods to target the brain. Among the non-invasive techniques, nasal drug delivery has emerged as a promising approach for delivering the drug into the brain. The nasal administration of a drug into the brain can be done by exploiting the olfactory and trigeminal pathway. Many research has taken place to study the effect of brain delivery through the nasal route to overcome the limitations of brain delivery 6, 9-12. The advantages of using the nasal drug delivery for brain targeting is that the method is useful in bypassing the hepatic first-pass metabolism, the method is a non-invasive, convenient method of administration, and reportedly safe mode of administration 13. Only direct contact of the CNS with the peripheral environment is through the olfactory region. The drug that is administered through the nasal route comes in contact with mucosa it will get absorbed into the brain, thereby maintaining excellent bioavailability and reducing the dose and side effects.

In spite of having so many advantages, the nasal drug delivery system has many disadvantages, which include the low volume of the nasal cavity, mucociliary clearance, and nasal enzymatic barriers 14. These limitations created a need for the development of advanced novel drug delivery methods. This lead to the evolution of nanotechnology-based drug delivery through nasal route 15. Nanotechnology has great applications in the medical and allied fields of sciences. The problems associated with nanotechnology-based drug delivery is the toxicity related to them. Nanoparticles are capable of reaching the brain, but they may not get cleared from the brain. It will lead to the accumulation of nanoparticles in the brain and will cause toxicity 16, 17.

Blood-Brain Barrier: 18 Blood-brain barrier is the part of the CNS of all organisms that are having a well-developed nervous system. BBB is present in the brain and spinal cord of mammals. The anatomically BBB is the cerebral microvascular endothelium, which, along with astrocytes, pericytes, neurons, and the extracellular matrix, constitute a “neurovascular unit” that is essential for the health and functions of the CNS. The BBB provides about 12 - 18m2 area for exchange in the brain for an average adult human. BBB consist of tight junctions formed by cerebral endothelial cells, the choroid plexus, epithelial cells, and the cells of the arachnoid epithelium.

Polar solutes reach the brain through paracellular diffusional pathways. The solutes diffuse through the endothelial cells from the blood plasma to the brain extracellular fluid. This mechanism is reduced due to the presence of tight junctions. 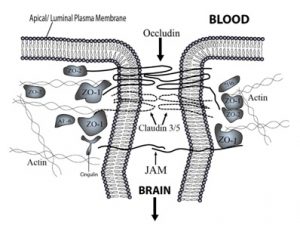 Most of the drugs available in the market are not capable of crossing the BBB. For a drug to cross BBB in pharmacologically significant amounts the drug molecule should have the following characters:

Nasal Route: 19, 20 Since, the BBB is impermeable to most of the drugs, delivering the drugs in therapeutically sufficient concentration into the brain is a tedious task. Many methods are being employed for brain targeting of the drugs. One of the most convenient routes among them is the nasal route of drug administration. This method proves efficient in delivering the drugs without causing damage to the BBB. There is a unique connection between the brain and the nasal route through which the drug can be delivered, bypassing the BBB.

Drug administered through the nasal route reaches the brain mainly through two pathways 21, 22. They are the olfactory pathway and trigeminal nerves. These pathways provide a safe and effective method for brain drug delivery.

Olfactory Neurons: Drug is carried from the olfactory mucosa to the brain with the help of neurons. But this mechanism is slower in transmitting the drug to the brain.

Olfactory Epithelium: This mechanism is faster for the transmission of the drug. The drug is transmitted to the perineural space through the olfactory epithelium using the paracellular mechanism to get transferred into the brain directly.

Trigeminal Pathway: The trigeminal pathway is another mechanism for the transport of drug through the nasal route. In this pathway, the drug is absorbed from the nasal cavity, which is innervated by the cranial nerve V (trigeminal).

There are three branches for trigeminal nerve; they are ophthalmic nerve, maxillary nerve, and mandibular nerve and these branches are producing sensations in the nasal cavity. These nerves enter into the brainstem through the pons and it enters to forebrain through cribriform plate resulting in drug entering to caudal and rostral parts of the brain 24.

Mechanism of Nasal Transport: Drug administered through the nasal route has to overcome many hurdles like mucus layer and continuously beating cilia. The movements of cilia are controlled by the ciliated columnar cells present in the nasal epithelium 20. Cilia in the olfactory region do not have a dynein arm, so they are immobile, but in the respiratory area, cilia are mobile. The drug which crosses this barrier is further carried across the nasal mucosa by either the transcellular mechanism or paracellular mechanism depicted in Fig. 2.

Transcellular Transport: Transcellular transport of molecules across BBB is a slow and time taking process. Endocytosis mediated by receptors is the pathway for the transport of molecules through BBB. Transcellular transport is receptor-mediated endocytosis by the mechanisms of clarithrin-dependant or independent transfer 25. The trigeminal ganglions, olfactory epithelium, olfactory bulb contains nicotinic acetylcholine receptors, and these receptors are responsible for the receptor-mediated endocytosis.

Paracellular Transport: Different junctions such as tight junction, zonula adherens, and macular adherens connects the cells in nasal epithelium with each other 28. In normal conditions, these junctions are not permeable to large molecules, but on continuous turnover of neuronal and basal cells, it becomes permeable 29. This process of increasing the permeation of these junctions will promote paracellular transport. The mechanism of drug transfer is depicted in Fig. 2. 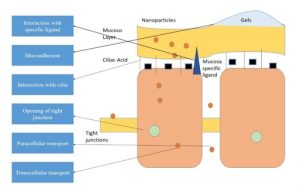 FIG. 2: POSSIBLE MECHANISMS FOR THE TRANSFER OF DRUG ACROSS THE BBB WHEN ADMINISTERED THROUGH NASAL ROUTE 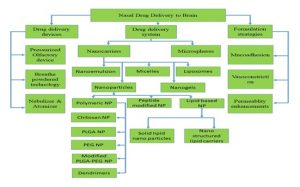 FIG. 3: DIFFERENT DRUG DELIVERY SYSTEMS THAT CAN BE EMPLOYED IN DELIVERING THE DRUG INTO THE BRAIN THROUGH NASAL ROUTE

Solid Lipid Nanoparticles: Solid lipid nanoparticles were developed during the first half of the 1990s, it was prepared by combining the advantages of solid particles, emulsions and liposomes combined 30. The basic concept of SLNs is simple, the liquid lipid in emulsions is replaced by a solid lipid. SLNs are prepared mainly by the two methods; they are a high-pressure homogenization technique developed by Muller and Lucks 31 and a microemulsion technique invented by Gasco and Turin 32.

TABLE 1: LIPIDS AND EMULSIFIERS USED FOR PREPARATION OF SLN 33

TABLE 2: LIST OF DRUGS THAT CAN BE INCORPORATED IN SLNS

Nanostructured Lipid Carriers: These NLCs are second-generation nanoparticle carriers for drug delivery. NLCs act as a bioactive carrier system. The above-mentioned limitations of SLNs can be overcome with the development of NLCs. The problem of drug expulsion is reduced in NLCs by using lipid blends that do not form a highly ordered crystalline arrangement.

The matrix system of NLCs is mixture of different lipids, normally solid lipid and liquid lipid is present in the matrix system. This arrangement will provide imperfections to the matrix whereby more drugs can be incorporated in the carrier than that of SLN 33. NLCs remain solid at room temperature and body temperature even after the incorporation of liquid lipids. The formulation of NLCs is having low systemic side effects 33, 34.

TABLE 3: COMPONENTS USED IN THE MANUFACTURE OF NLCS 35 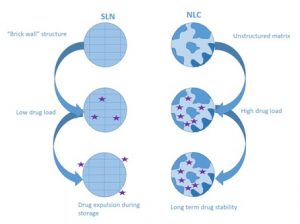 FIG. 4: SCHEMATIC DIAGRAM OF SLNS AND NLCS FOR HIGHLIGHTING THE ADVANTAGES OF NLCS

TABLE 4: LIST OF REPORTED FORMULATION OF NLCS ALONG WITH THE SAFETY DATA OF EACH INGREDIENTS AND TECHNIQUE USED FOR THE PREPARATION 36

CONCLUSION: Nano-carriers is one of the most promising techniques for the targeting of drugs to specific organs like the brain. The nano-carriers are capable of delivering less permeable drugs into the organs and are capable of sustained release of drugs. Nasal to brain route is one of the most promising routes of administration for delivering a drug into the brain, bypassing the first-pass metabolism. Also, this route can prevent the drug from reaching the circulation, thereby reducing the chance of toxicity to other organs. Both SLNs and NLCs are very good carriers of the drug. But NLCs are more advanced than SLNs and do not have many of the disadvantages that SLNs are having. Poloxamer 188, soy lecithin, compritol 888 ATO, medium-chain triglycerides, oleic acid, etc. are the most commonly used excipients in the preparation of NLCs and SLNs.

ACKNOWLEDGEMENT: The author thanks JSS Academy of Higher Education and Research, for providing the necessary facility to accomplish the work.