INTRODUCTION:  Telmisartan (TEL), (fig1) a non-peptide molecule and its IUPAC name is 4׳-[(1,4׳-dimethyl-2׳-propyl [2,6׳-bi-1H-benzimidazol]-1׳-yl) methyl] [1,1׳-biphenyl]-2-carboxylic acid 1. It is an angiotensin II, type I blocker and is used as an antihypertensive along with hydrochlorithiazide.

It is a thiazide diuretic which reduces the reabsorption of electrolytes from the renal tubules, thereby increasing the excretion of sodium and chloride ions and consequently water.

The combination is useful in the treatment of mild to moderate hypertension, well tolerated with a lower incidence of cough than ACE inhibitors 2.

Chemicals and reagents: THF, methanol and water of HPLC grade were produced from Merck specialties Pvt. Ltd. Mumbai. A working standard of telmisartan and hydrochlorothiazide was provided by V.V.Med laboratories, Hyderabad.

Chromatographic conditions: Kromasil C18 (250X4.6mm) column was used for the separation; a mobile phase of methanol, THF and water in the ratio 55:05:40 was filtered through 0.45µm membrane filter paper and delivered at a flow rate of 1mL/min and the wavelength of detection was at 234 nm. The injection volume was 20µL, and the total run time 8min. The resulting chromatogram was shown in Fig. 2. 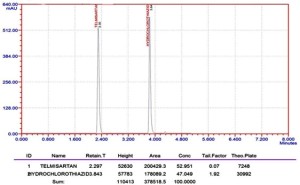 Preparation of standard solutions: Standard stock solutions of 1.0 mg/mL telmisartan and hydrochlorothiazide were prepared separately using methanol as solvent. In order to get the required ratio (3.2:1) of both the drugs telmisartan and hydrochlorothiazide appropriate quantities of respective solutions of each drug were mixed and diluted with the mobile phase.

Preparation of sample solution: Twenty tablets were weighed and finely powdered. A quantity of powder equivalent to 40 mg of  telmisartan and 12.5 mg of hydrochlorothiazide were weighed and transferred to a 50 mL volumetric flask; methanol was added to the same flask and shaken for some time and the volume was made up to the mark. The solution was filtered using Whatman filter paper. From the filtrate appropriate dilution was done to get a solution of 80 µg/mL of telmisartan and 50 µg/mL of hydrochlorothazide.

System suitability studies: The resolution, numbers of theoretical plates were calculated for the working standard solutions and are shown in table 1. The values obtained demonstrated the suitability of the system for the analysis of these drugs in combination.

Method development: Different mobile phases containing of methanol, THF and water in different proportions were tried, and finally, methanol: THF: H2O in the ratio 55:05:40 was found to be an appropriate mobile phase, which gave acceptable peak parameters for both telmisartan and hydrochlorothiazide.

Method validation: The validation of the method was carried out in terms of parameters like linearity, precision, accuracy, limit of detection, limit of quantification, specificity and robustness.

Specificity: The Specificity of the RP-HPLC method was determined by the complete separation of telmisartan and hydrochlorothiazide as shown in fig. 2 with parameters like retention time (Rt= 2.3 min for TEL and Rt=3.8 min for HCTZ) and tailing factor (0.07 for TEL and 1.92 for HCTZ). Moreover, the clear baseline separation of the drugs and sharp peaks also supports the specificity of the method.

Linearity: The linearity of the method was tested over a concentration range of 50 to 100µg/mL of TEL and HCTZ. 20µL of each concentration was injected in duplicate into the HPLC system. 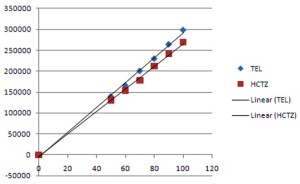 FIG. 3: LINEARITY OF TELMISARTAN AND HYDROCHLOROTHIAZIDE

Precision: The precision of the method was determined by inter day and intraday studies, solutions of standard and sample were repeated thrice in a day and percentage relative standard deviation (%RSD) was calculated. Results of system precision studies were shown in Table 3 and 4. The %RSD found were less than 1%.

Robustness: Robustness of the method was studied by making slight changes in chromatographic conditions, such as mobile phase ratio, pH and wavelength of detection (table 6). It was observed that there were no marked changes in the chromatograms obtained. So the developed RP-HPLC method was robust.

Limit of Detection and Limit of Quantification: The limit of detection (LOD) is the smallest concentration of the analyte that gives the measurable response. LOD was calculated using the following formula:

The LOD for telmisartan and hydrochlorothiazide was found to be 0.1ppm for both the drugs (Table 1).

The limit of quantification (LOQ) is the smallest concentration of the analyte, which gives a response that can be accurately quantified. LOQ was calculated using the formula:

The LOQ was 0.5ppm and 0.4ppm for telmisartan and hydrochlorothiazide, respectively (Table 1).

RESULTS AND DISCUSSION: The method was developed using the mobile phase MeOH: THF: H2O in the ratio 55:05:40, and the standard chromatogram obtained showed the elution of telmisartan at tR =2.3 min, tailing factor 0.07 and elution of hydrochlorothiazide at tR =3.8 min, tailing factor 1.92. The separation of two drugs for the selected mobile phase is much prominent. Moreover, the order of elution of the two drugs is in good agreement with the earlier reported method 4, which was developed, with the mobile phase MeOH: CH3CN in the ratio 70:30.

However these two methods in respect of order of elution of drugs were contradictory to other methods [3, 5, 6, 7, and 8] which were developed using 1% ortho phosphoric acid as one of the solvents in the mobile phases with either methanol or acetonitrile. This order of elution of telmisartan (at tR =2.3 min) and hydrochlorothiazide (at tR =3.8 min) may be because of greater affinity of telmisartan towards the mobile phase compared to hydrochlorothiazide i.e. the change is determined by the polarity of the mobile phase selected in the present study.

Moreover, the LOD and LOQ for telmisartan were found to be 0.1µg/mL and 0.5µg/mL, respectively, and for hydrochloro-thiazide the values are 0.1µg/mL and 0.4µg/mL, respectively (Table 1).A system suitability test was applied to representative chromatograms for various parameters. A graph was constructed covering a concentration range 50 to 100ppm. The calibration curve was obtained for a series of concentrations in the range of 50 to 100ppm and it was found to be linear. The data of regression analysis of the calibration curves are shown in table 2. The method was found to be accurate and precise, as indicated by the recovery studies and %RSD calculated is less than 1.

CONCLUSION: The developed RP-HPLC method for the simultaneous estimation of telmisartan and hydrochlorothiazide in combined dosage form is more precise, robust, and accurate in respect of validation and the quality of separation achieved of the two drugs is also good in terms of retention times and tailing factor.

Hence, the proposed method is applicable to the determination of telmisartan and hydrochloro-thiazide in pharmaceutical formulations.

ACKNOWLEDGEMENTS: The authors are Thankful to Acharya Nagarjuna University for constant encouragement and RV Labs, Guntur for providing instrumental support.