ABSTRACT: Dissolution of drug and its release from the dosage form have basic impact on bioavailability. Bioavailability depends on solubility of drug. Solubility is major challenge for the pharmaceutical industry with the developments of new pharmaceutical products. There are several approaches for solubility enhancement which includes micronization, Nanonisation, use of salt forms, use of surfactant, solid dispersion, and supercritical fluid recrystalization etc. Liquisolid technique is novel and efficient approach for solubility enhancement. According to this method the conversion of water insoluble drug into dry looking, non adherent, free flowing and acceptably compressible powder by incorporating into suitable non volatile solvents, carrier material and coating materials. This free flowing powder is than subjected to Preformulation studies like Fourier transformed infrared spectroscopy, differential scanning Calorimetry for compatibility studies , angle of slide, flow properties, solubility studies, calculation of liquid load retention potential, liquid load factor etc. These free flowing powders are subjected to compression for tablet or filled in capsules. The mechanism for solubility enhancement includes increase in wettability and surface of drug available for dissolution. This method is efficient, economic, viable for industrial production, also useful in control drug delivery system. Hence due to above reasons liquisolid technique is most efficient and novel approach for solubility enhancement.

INTRODUCTION: Solubility of drug is one of the important parameter for bioavailability of drug. In recent years, approximately 70% of new drugs candidate and 40% of marketed new drugs in oral immediate release dosage form exhibits low aqueous solubility. 1 Mainly oral route is preferred for administration of the drugs because of patient compliance, convenience and low cost factor. When oral route for administration of the drug is chosen then that drug should be sufficiently dissolved in gastric fluids for its proper absorption.

If the drugs have less solubility in the gastric fluids then it will be less available for its absorption and due to this its bioavailability will be less.  Thus, one of the greatest challenges the pharmaceutical industries faces today is the application of technological strategies towards improving the dissolution performance of drugs, producing formulations with adequate bioavailability and therapeutic effectiveness.

Various methods used for enhancing solubility and thus bioavailability of drug are: 2, 3

There are three basic technologies currently in use to prepare nanoparticles.

Liquisolid technique: A liquisolid system refers to formulations formed by conversion of liquid drugs, drug suspensions or drug solution in non-volatile solvents, into dry, non-adherent, free flowing and compressible powder mixtures by blending the suspension or solution with selected carriers and coating materials.

Need of liquisolid technique: The oral route remains the preferred route of drug administration due to its convenience, good patient compliance and low medicine production costs. In order for a drug to be absorbed into the systemic circulation following oral administration, the drug must be dissolved in the gastric fluids. Thus, one of the major challenges to drug development today are poor solubility, as an estimated 40% of all newly developed drugs are poorly soluble or insoluble in water. The dissolution rate of these drugs can be improved by decreasing particle size, decreasing crystallinity, and/or increasing the surface area. Several studies have been carried out to increase the dissolution rate of drugs by decreasing the particle size, by creating nanoparticles and microparticles. However, the fine drug particles have high tendency to agglomerate due to Vander Waals attraction or hydrophobicity, which both result in a decrease in surface area over time. Another way of increasing the dissolution rate is adsorption of the drug onto a high-surface area carrier. In this technique, the drug is dissolved in an organic solvent followed by soaking of the solution by a high surface area carrier such as silica. Here, agglomeration of the drug particles is prevented due to the binding of drug to the carrier. However, due to the presence of the residual solvent in the drug formulation, it is disadvantageous to use toxic solvents. To overcome the problem, the technique of ‘liquisolid compacts’ is a new and promising approach towards dissolution enhancement.

Concept of liquisolid technique: When the drug dissolved in the liquid vehicle is incorporated into a carrier material which has a porous surface and closely matted fibres in its interior as cellulose, both absorption and adsorption take place; i.e. the liquid initially absorbed in the interior of the particles is captured by its internal structure, and after the saturation of this process, adsorption of the liquid onto the internal and external surfaces of the porous carrier particles occur. Then, the coating material having high adsorptive properties and large specific surface area gives the liquisolid system the desirable flow characteristics. 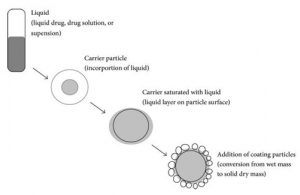 Mechanism of enhancement of solubility: 1, 15 The wettability of the compacts in the dissolution media is one of the proposed mechanisms for explaining the enhanced dissolution rate from the liquisolid compacts. Non-volatile solvent present in the liquisolid system facilitates wetting of drug particles by decreasing interfacial tension between dissolution medium and tablet surface. Thus, due to substantial increase in wettability and effective surface area for dissolution, liquisolid compacts may be expected to reveal enhanced release profiles of water-insoluble drugs. Since dissolution of a non-polar drug is often the rate limiting step in gastrointestinal absorption, better bioavailability of an orally administered water-insoluble drug is achieved when the drug is already in solution, thereby displaying enhanced dissolution rates. However, the drug release profile entirely depends on the characteristics of drug, carrier and vehicle used. Thus by altering these variables, liquisolid technique can be used for enhancing or retarding the drug release. 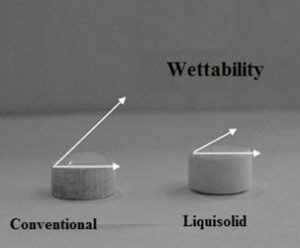 FIG. 2: COMPARISON OF WETTABILITY OF CONVENTIONAL AND LIQUISOLID TABLETS. 15

Based upon liquid medication used:

Based upon technique of formulation:

It is mainly divided into two categories:

The Φ values are calculated according to equation

Formulation of liquisolid compacts: It is one of the novel techniques which is used for solubility enhancement and bioavailability of poorly water soluble drug.  It is first described by Spires. It is also called as “Powdered Solution Technology”. 4 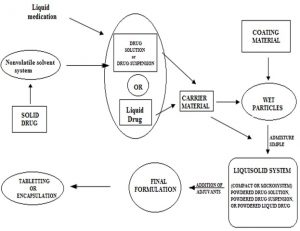 Flow behavior: 8 The flowability of a powder is of critical importance in the production of pharmaceutical dosage forms in order to reduce high dose variations.  Angle of repose, Carr’s index and Hausner’s ratio were used in order to ensure the flow properties of the liquisolid systems.

Angle of repose: The angle of repose physical mixtures of liquisolid compacts were determined by fixed funnel method.  The accurately weighed physical mixtures of liquisolid compacts were taken in a funnel. The height of the funnel was adjusted in such a way that the tip of the funnel just touches the apex of the heap of the powder. The powder was allowed to flow through the funnel freely into the surface. The height and diameter of the powder cone was measured and angle of repose was calculated.

Where, θ is the angle of repose, h is the height in cms, r is the radius in cms

Where, M is the mass of powder

Vb is bulk volume of powder

Tapped Density: The measuring cylinder containing a known mass of blend was tapped for a fixed time. The minimum volume (Vt) occupied in the cylinder and the weight (M) of the blend was measured. The tapped density was calculated using the. Formula:

Where, M is the mass of powder

Vt is tapped volume of powder

Carr’s Index (%): The compressibility index has been proposed as an indirect measure of bulk density, size and shape, surface area, moisture content and cohesiveness of material because all of these ca influence the compressibility index. The simplest way for measurement of free flow of powder is Carr’s Index, a indication of the ease with which a material can be induced to flow is given by Carr’s index (CI) which is calculated as follows:

The value below 15% indicates a powder with usually gives rise to good flow characteristics, where as above 25% indicates poor flow ability.

Hausner’s Ratio: Hausner’s ratio is an indirect index of ease of powder flow. It is calculated by the following formula.

Where ρt is tapped density and ρb is bulk density. Lower Hausner’s ratio (<1.25) indicates better flow   properties than higher ones, between 1.25 to 1.5 showing moderate flow properties and more than 1.5 poor flow.

CONCLUSION: Various methods are studied to improve water solubility and drug release, among which the liquisolid technology is one of the most promising approaches. With this technology liquids such as solutions or suspensions of poorly soluble drugs in a non-volatile liquid vehicle are converted into acceptably flowing and compressible powders by simple physical blending with selected excipients named the carrier and the coating material. As highest drug release rates are observed with liquisolid compacts containing a drug solution as liquid portion, liquisolid compacts may be optimized by selection of the liquid vehicle and the carrier and coating materials. The addition of Disintegrant may further accelerate drug release from liquisolid compacts. The liquisolid technology may also be used for the preparation of sustained release formulations with zero order release pattern. Thus, a constant plasma level will be reached, which is maintained throughout the dosing interval. For sustained release liquisolid compacts, the selection and the concentration of the excipients such as liquid vehicle, retarding agent (matrix forming material) as well as carrier and coating material play an important role. The liquisolid approach is a promising technology because of the simple manufacturing process, low production costs and the possibility of industrial manufacture due to the good flow and compaction properties of liquisolid formulation.

CONFLICT OF INTEREST: We have no conflict of Interest.