ABSTRACT: The trigeminal ganglion consists of pseudounipolar neurons surrounded by satellite glial cells and processes innervating craniofacial region. The trigeminal ganglion consists of neurons which are of first order pseudounipolar carrying sensory pathway from the receptors from face, mouth, scalp and duramater. The gap junctions are trans-membrane proteins formed between the cell membranes of adjacent cells and calcitonin gene related peptide are neuro-peptides secreted by sensory neurons. In present study the immune histochemical localization for connexin 36 gap junctions and CGRP was done in the trigeminal ganglion of male Wistar rats. The result showed connexin 36 was present between the satellite glial cells, between satellite glial cell and neuron and in the schwann cells. CGRP was localized densely in the cytoplasm of small neurons. The excited neuron can influence the surrounding satellite glial cells and neurons through gap junctions and by paracrine actions altering its environment leading to pathological role in inducing painful conditions like migraine.

INTRODUCTION: The trigeminal ganglion consists of neurons which are of first order pseudounipolar carrying sensory pathway from the receptors. They receive sensation from receptors of face, mouth, scalp and duramater 1. These pseudounipolar neurons inside the ganglion are covered by satellite glial cells nothing but continuous with the Schwann cell sheath that surrounds the axon 2. These satellite glial cells expresses glial fibrillary acidic protein (GFAP) that is involved in inflammation and pain associated with migraine and neuralgia 3.

Migraine and trigeminal neuralgia, a major neurovascular disorder occurring due to the pathological changes in the cutaneous innervations of the trigeminal ganglion like the meningeal tissues, head and neck and scalp 4. Following any changes in the cutaneous sensation the neurons receiving the sensation gets excited and alters the normal functioning of surrounding neurons leading to pathological neuropathic pain 5.

The mechanism by which the pathologically altered neurons exciting the surrounding neurons involve in a role of developing very painful conditions is not explained clearly so far. Connexins or gap junctions are the proteins present in the membranes between the two cells that allow exchange of substances between them. These gap junctions consist of series of trans-membrane protein hexamer, connexins that are termed as connexon. The connexons are arranged around a central pore in the membrane to form the gap junction that allows exchange 6. As of now there are 21 different connexins in humans depending on the type of hexamers expressed in any one cell type and their functions influencing the selective passage of ions between the adjacent cells 7. Astrocytes glial cell express mainly three different types of connexins 26, 30 and 43 between the astrocytes and between astrocytes and neurons 8.

Neuropeptides are the proteins synthesized and released by the neurons in response to any peripheral stimulation which has a role in paracrine actions mediating adjacent neurons by acting on its cell surface receptors and autocrine actions by acting on its own receptors 9. The important nociceptive neuropeptides released by the neurons are calcitonin gene related peptide (CGRP) and substance P. Calcitonin gene-related peptide (CGRP) is a widely distributed in both central and peripheral nervous system with a unique function as a primary afferent neurotransmitter 10.

Any inflammation or injury of peripheral tissue which are innervated by trigeminal ganglion will up regulate the production of CGRP in the pseudounipolar neurons innervated by type Aδ and type C-fibres indicating CGRP are an important neuropeptide in nociception 11.  Based on size of the pseudounipolar neurons, they are classified into small, medium and large. The neurons of diameter <22μ are small, between 22-29μ are medium and more than >29μ are large sized neurons 12.

The small sized neuron (<22μ) are innervated by type Aδ and type C-fibres, which carry nociceptive sensation from head and neck. The exact etiology of migraine had not been studied so far and proved; this present study was done to identify the expression of connexin 36 and Calcitonin gene related peptide in the trigeminal ganglion as a probable cause for migraine.

MATERIAL AND METHODS: This study was conducted in male wistar albino rats obtained from Saveetha medical college animal facility after prior approval from the Institutional Animal Ethical Committee (IAEC). Male wistar albino rats six in number of weight approximately around 200-250g were used to study the trigeminal ganglion in this study. The animals were placed in the cage comfortable with not more than three animals in one single cage. The animals were maintained at twelve hour light and dark cycles with excess of water and food available at any time. On the day of experiment the animals were sacrificed and dissected for trigeminal ganglion near the base of skull after transcardiac perfusion with saline and 500ml of 4% para-formaldehyde. The trigeminal ganglion were dissected and collected in sample bottles and kept in 10% formalin over night.

Immuno - histochemical Localization: The dissected trigeminal ganglion samples were placed in the chuck with optimum cutting temperature (OCT) medium that enables the easy sectioning using cryostat with thickness 20 micron. For each trigeminal ganglion, the sections were collected separately in multivial culture plated and labelled. The sections were localized for Connexin 36 and CGRP with antibodies obtained from sigma laboratories (USA). The standard dilution ratio for Connexin 36 was 1:2000 and CGRP was 1:1000 which were determined after repeated dilution standardization.

Immunolocalization for CGRP: The CGRP was localized in the cytoplasm of all neurons of the trigeminal ganglion (Fig. 1 (yellow arrow) and Fig. 2). Based on immunostaining pattern of CGRP in the neurons, they can be classified into two types type A and type B.

The maximum diameter of darkly stained CGRP neurons (type B) of the trigeminal ganglion showed small and medium sized groups. The CGRP was also localized in the nerve fiber which may be afferent carrying sensation. (Fig. 1 black arrow). 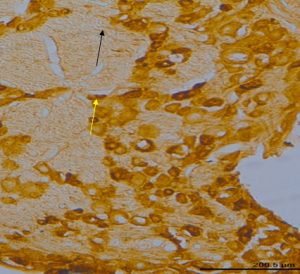 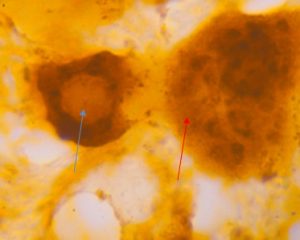 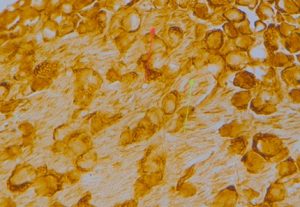 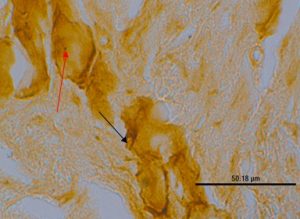 In any sensory ganglia, the satellite glial cells, surrounding the pseudounipolar neurons, posses receptors for numerous neuroactive agents, like ATP, bradykinin etc, which may contribute to the pathological role of the ganglion. These neuroactive agents released from excited or stimulated cells like neurons or satellite glial cells can activate surrounding neural and glial cells through gap junctions and alter the ionic composition leading to migraine or trigeminal neuralgia 13.

In the present study, schwann cells surrounding the axons also express connexin 36 (Fig. 3 green arrow) suggesting that schwann cells can maintain the axonal transport of neuroactive agents depending on the external environment 14. One study had found that the connexin 43 expressing schwann cells may aggravate injury if they remain open in dying cells. This happens due to toxic substances spreading to neighboring cells and altering the normal ionic composition leading to inflammation 15. Also one study had proposed that connexin 43 expressing schwann cells play a major role in recovery and regeneration of neurons following injury 16. Similarly this connexin 36 may have similar function like that of connexin 43 in neuronal excitation.

Localization of CGRP: In this present study there was intense localization of CGRP in the smaller and medium sized neurons and there was weak localization of CGRP in the large sized neurons. The small sized neurons which have coarse localization of CGRP are innervated by type Aδ and type C-fibres which mediate mainly pain sensation 11 and appear to have an important role in nociception. One study concluded that the activation of one trigeminal pseudounipolar neuron leads to changes in environment of adjacent glial cells and neurons through the gap junctions 17. Also the released CGRP from the neurons have paracrine signalling by activating other neurons and nerve fibers. By all these previous studies and the present study it is suggested that the neuronal–glial communication through gap junctions and by paracrine signalling through CGRP are involved in the development of peripheral sensitization and are likely to play an important role in the initiation of migraine.

Calcitonin gene-related peptide, which is expressed in most nociceptive neurons in the trigeminal ganglion, can cause excitation of surrounding neuronal and satellite glial cells by paracrine signal and may further increase the synthesis release of CGRP 19. Also one study showed that activation of a few neurons could release CGRP not only from their cell bodies but also from their processes i.e. dendrites and axons 17. Thus CGRP released from one neuron can stimulate nearby neurons by paracrine actions and also can stimulate distant neurons in the brain stem nuclei of trigeminal ganglion through axonal release and spread an inflammatory signal in the ganglion and also outside the ganglion. This study also shows that nerve fibers express CGRP indicating they are also involved in sensitization following any injury or painful conditions.

Mechanism of Neuropathic Pain: By all these information it shows that any peripheral sensitization releases CGRP an important neuropeptide in pain can cause paracrine actions on surrounding cells stimulating them to produce various inflammatory proteins also connexins. These connexins when expressed at increased level can exchange ions intracellular leading to excitation of neurons further leading to express more CGRP and this cycle gets repeated constantly until intervention is done.

CONCLUSION: This is the first study that concludes there are gap junction connexin 36 between the satellite glial cells and neurons and neuropeptides like calcitonin gene related peptide within the neurons of the trigeminal ganglion which may be the probable cause for neuropathic pain following any sensitization. By developing antagonist to these channels and peptides there can be exact treatment substituted instead of supportive therapy.

CONFLICT OF INTEREST: There are no conflicts of interest between the authors.