INTRODUCTION: Oral cancer, the fifth most common malignancy worldwide, accounts for 3-4% in Western countries and 40-50% of all cancers in developing countries including India. India has recorded the highest incidence of oral cancer worldwide and approximately 100,000 individuals are suffering from oral cancer in any given year 1. Long term tobacco smoking, tobacco chewing, betel quid chewing and alcohol consumption play a major role in the pathogenesis of oral cancer 2.

The glycoproteins and proteoglycans comprise the extracellular matrix and are the determinant of cellular and biochemical events in the tissues. Cell surface glycoconjugates and sialic acid play an important role in cell-cell communication and cell adhesion. Sialic acids, a nine-carbon keto sugars, play prominent role in the regulation of the immune response as well as in the progression and metastasis of malignant tumors 4. The status of glycoconjugates is used to diagnose early detection as well as predicting prognosis of the cancerous lesions. Sialic acid or fucose exists as terminal units of oligosaccharides of glycoproteins. Abnormal glycosylation in the cell surface is recognized as the unique feature of neoplastic transformation. It has been well documented that altered glycosylation, fucosylation and sialylation may play crucial role in the pathogenesis of several cancers including oral cancer 5.

Tumor progression is associated with overexpression of cell surface glycoconjugates, sialic acid and fucose moities. Fucose, a terminal pentose sugar of the glycoprotein chain, has crucial role in slowing the growth rate of tumor cells. Increased fucosylation of glycoproteins is responsible for decreased cell adhesion and uncontrolled growth. Elevated levels of protein-bound hexose, hexosamine, sialic acids and fucose were reported in the plasma and tumor tissues of human and experimental oral carcinogenesis 6, 7.

Lipids have pivotal role in the maintenance of cellular integrity and altered lipid composition in the cell could thus leads to abnormalities in the physico-chemical properties of the biomembranes, contributing to malignant transformation. The molar ratio of cholesterol and phospholipid determines cell fluidity, fragility and membrane permeability. Altered levels of lipids have been documented in several cancerous conditions including oral cancer 8.

Lupeol, an important bioactive constituent of several plants, fruits and vegetables, is a pentacyclic triterpene in nature (figure 1). Lupeol has received great attention due to its broad range of biochemical and pharmacological activities. Lupeol exerted anti-genotoxic, anticancer, anti-inflammatory and hepato-protective effects in experimental animal models 9, 10. Lupeol did not revealed adverse effects and toxicity even at a dose of 2g/kg bw in experimental animals 11. The protective effect of lupeol on cellular integrity was not reported so far in experimental carcinogenesis. 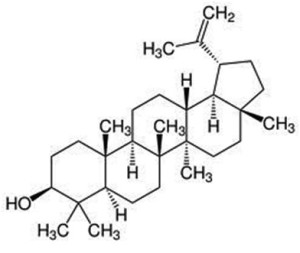 The present study was therefore designed to study the protective effect of lupeol on cellular integrity by analyzing the status of glycoconjugates and lipids during DMBA-induced hamster buccal pouch carcinogenesis.

Chemicals: DMBA and Lupeol were purchased from Sigma Aldrich Chemical Pvt. Ltd., Bangalore, India. All other chemicals used were of analytical grade.

Animals were randomly divided in to 4 groups (6 animals per group) on the basis of treatment that each animal received. Group 1 animals served as control and were painted with liquid paraffin (Vehicle) three times a week for 14 weeks on their left buccal pouches. Animals in groups 2 and 3 were painted with a 0.5% solution of DMBA in liquid paraffin three times per weeks for 14 weeks. Group 2 animals received no other treatment. Group 3 animals were orally administered with lupeol at a concentration of 50mg/kg bw three times per week, starting 1 week before the exposure to the carcinogen and continue on days alternate to DMBA application. Group 4 animals were received oral administration of lupeol 50mg/kg bw alone throughout the experimental period.

The experiment was terminated at the end of 15th week and all animals were sacrificed by cervical dislocation.

Samples: Biochemical studies were conducted on plasma and buccal mucosa of control and experimental animals in each group. Blood samples were collected into heparinized tubes. Plasma was separated by centrifugation at 1,000g for 15 minutes. Tissue samples from animals were washed with ice cold saline and homogenized using Tris-HCl buffer in an all-glass homogenizer with a Teflon® (DuPont, Wilmington, DE) pestle and used for biochemical estimations.

Biochemical studies: The precipitate obtained after treating the plasma with 95% ethanol was used for the estimation of protein bound hexose and hexosamine. The defatted tissues obtained after treating buccal mucosa with methanol and chloroform was used for the estimation of glycoproteins. To the dry defatted tissues remaining after lipid extraction, 0.1N H2SO4 was added and hydrolyzed at 80ºC for 1 h. It was cooled and the aliquot was used for sialic acid estimation. To the remaining solution, 0.1N sodium hydroxide was added and kept in an ice bath for 1 h. From these aliquots, protein bound hexose and fucose were estimated. The protein bound hexose in plasma and defatted buccal mucosa was estimated by the method of Niebes et al 12.

Statistical analysis: The data are expressed as mean ± SD. Statistical comparisons were performed by one-way analysis of variance (ANOVA) followed by Duncan’s Multiple Range Test (DMRT). The results were considered statistically significant if the p values were 0.05 or less.

TABLE1: INCIDENCE OF ORAL NEOPLASM IN CONTROL AND EXPERIMENTAL HAMSTERS IN EACH GROUP (n=6)

Tumor volume was measured using the formula, V = (4/3)π[D1/2][D2/2][D3/2] where D1, D2 and D3 are the three diameters (mm3) of the tumor. Tumor burden was calculated by multiplying tumor volume and the number of tumors per animal 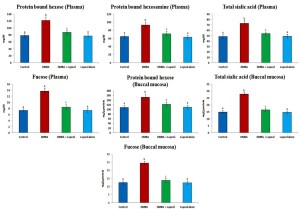 FIGURE 2: PLASMA AND BUCCAL MUCOSA GLYCOCONJUGATES IN CONTROL AND EXPERIMENTAL HAMSTERS IN EACH GROUP

Values are expressed as mean ± SD for 6 hamsters in each group. Values that do not share a common superscript letter between groups differ significantly at p < 0.05 (DMRT) 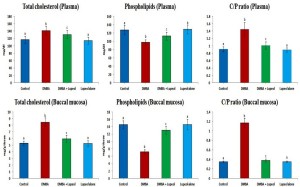 FIGURE 3: PLASMA AND BUCCAL MUCOSA LIPID PROFILE IN CONTROL AND EXPERIMENTAL HAMSTERS IN EACH GROUP

Values are expressed as mean ± SD for 6 hamsters in each group. Values that do not share a common superscript letter between groups differ significantly at p < 0.05 (DMRT)

DISCUSSION: The glycosyl residues of glycoconjgates serve an important role in the regulation of cell proliferation and growth. Malignant transformation due to abnormalities in glycoconjugates contributes to aberrant cell-cell recognition, cell adhesion, antigenicity and invasiveness 18. Glycoconjugates were altered in pre-cancerous and cancerous conditions. The levels of glycoproteins were increased gradually as the tumor progresses from stage I to stage IV of cancer. A positive correlation between glycoproteins content and cell proliferation has been shown in several cancers 19. Extensive studies reported increased levels of total and lipid bound sialic acids in cancerous conditions 7, 20. Tumor tissues synthesize specific sialylated sequences during proliferation.

Our results are in line with these findings. Enhanced synthesis of glycoproteins in tumor tissues itself and in liver with subsequent release into plasma has been well documented 23. A large number of experimental studies on carcinogenesis reported that glycoproteins are spontaneously released from tumor cells 24. Increased levels of glycoconjugates in plasma of DMBA treated hamsters could be due to increased shedding from the tumor tissues.

Tomsik et al 25 reported that L-fucose exhibited promising anticancer potential when administered to tumor bearing mice. Shah et al 26 demonstrated the association of changes in serum fucosylation with oral cancer development. A positive association between plasma fucose level and tumor progression has been reported in experimental carcinogenesis 27. A large number of experimental and human studies on carcinogenesis suggested that increased turnover and shedding from tumor cells could account for increased plasma sialic acid and fucose content 6, 27.

Our results corroborate these observations. Lipids are utilized as energy fuel not only by normal tissues but also by growing tumor tissues. Abnormalities of the lipid metabolism including hyperlipidemia may be deeply associated with tumor development and progression. A large number of studies reported increased levels of cholesterol in the plasma and tumor tissues 8. An increase in plasma phospholipids and decrease in tumor tissue phospholipids were also reported 28. Our results lend credence to these observations.

Oral administration of lupeol at a dose of 50mg/kg bw to DMBA treated hamsters not only completely prevented the tumor formation but also brought back the status of glycoconjugates and lipids to near normal range in plasma and buccal mucosa, which suggests that lupeol might have protected the cellular integrity during DMBA-induced hamster buccal pouch carcinogenesis. Although, the exact mechanism for the protective effect of lupeol on cellular integrity is unclear, the possible mechanisms may include its inhibitory effect on the activities of enzymes involved in the glycosylation, sialylation and fucosylation as well as in the lipids synthesis.

Further studies are warranted to elucidate the actual mechanism involved behind the protective effect of lupeol on cellular integrity during DMBA-induced hamster buccal pouch carcinogenesis.