ABSTRACTLycopene is a carotenoid that is present in tomatoes, processed tomato products and other fruits. It is one of the most potent antioxidants among dietary carotenoids. Dietary intake of tomatoes and tomato products containing lycopene has been shown to be associated with a decreased risk of chronic diseases, such as cancer and cardiovascular disease. Serum and tissue lycopene levels have been found to be inversely related to the incidence of several types of cancer, including breast cancer and prostate cancer. Although the antioxidant properties of lycopene are thought to be primarily responsible for its beneficial effects, evidence is accumulating to suggest that other mechanisms may also be involved. In this article we outline the possible mechanisms of action of lycopene and review the current understanding of its role in human health and disease prevention

INTRODUCTION: Oxidative stress, induced by reactive oxygen species (ROS), is one of the main foci of recent research related to the incidence of chronic diseases such as cancer, coronary heart disease (CHD) and osteoporosis 1. ROS are highly reactive oxidant molecules that are generated endogenously through normal metabolic processes, life style activity and the diet. They react with cellular components, causing oxidative damage to such critical cellular biomolecules as lipids, proteins and DNA.

There is strong evidence that this damage may play a significant role in the causation of several chronic diseases.  Antioxidants provide an  effective means to combat the deleterious effects of ROS and are increasingly being considered as strategic chemopreventive agents in the management of human diseases. Lycopene, a carotenoid phytonutrient, is the most potent antioxidant naturally present in many fruits and vegetables.

However, tomatoes and processed tomato products constitute the major source of dietary lycopene accounting for up to 85% of the daily intake 2.

There is considerable scientific interest in the role of lycopene in the prevention of several degenerative diseases.Chemistry, Bioavailability and Metabolism of Lycopene: Lycopene is a highly unsaturated straight chain hydrocarbon with a total of thirteen double bonds, eleven of which are conjugated (Fig. 1). 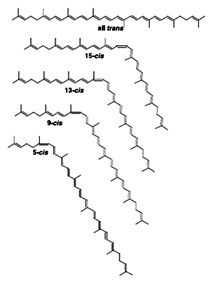 This unique nature of the lycopene molecule makes it a very potent antioxidant. In vitro studies have shown lycopene to be twice as potent as β-carotene and ten times that of α-tocopherol in terms of its singlet oxygen quenching ability. Lycopene lacks the terminal β-ionic rings, and unlike β-carotene, lacks pro-vitamin A activity. Although in nature it exists predominantly in its all-trans isomeric form, it can undergo light, thermal energy and chemical reaction  induced  cis-isomerization.

The biological significance of lycopene isomerisation is not fully understood. Lycopene absorption has been shown to be significantly higher in the thermally processed tomato products compared to raw tomatoes, and the processed products were shown to contain higher levels of cis-isomers of lycopene 4. It is therefore thought that cis-isomerization of lycopene enhance its absorption 5. Lycopene was shown to be readily absorbed from tomato juice, tomato sauce and supplements 6.

Serum lycopene levels were shown to increase significantly upon the consumption of tomato products and supplements with a concomitant decrease in the biomarkers of oxidation including the oxidation of serum lipids, low density lipoprotein cholesterol, serum proteins and DNA. No adverse effects were observed in this study up to a daily intake of 150 mg lycopene for one week 6.

Recent studies have shown that ingested lycopene is metabolized in the body. Several metabolites have now been identified and characterized 7. It is not known if these metabolites represent the biologically active forms of lycopene.

Sources: Tomatoes, pink grapefruit, watermelon and guava. In tomatoes, lycopene content is affected by the specific variety of tomato and by ripening stage. Deep red varieties contain upto 50 mg/kg, while yellow tomatoes may be as low as 5 mg/kg (Table 1). Bioavailability of lycopene is improved while cooking.

Mechanism of Action: The biological activities of carotenoids such as β- carotene are related in general to their ability to form vitamin A within the body 8.Since lycopene lacks the β-ionone ring structure, it cannot form vitamin A. Its biological effects in humans have therefore been attributed to mechanisms other than vitamin A. Two major hypotheses have been proposed to explain the anti-carcinogenic and anti-atherogenic activities of lycopene: non-oxidative and oxidative mechanisms (Fig. 2).

The proposed mechanisms for the role of lycopene in the prevention of chronic diseases are summarized in. Among the non-oxidative mechanisms, the anti-carcinogenic effects of lycopene have been suggested to be due to regulation of gap-junction communication in mouse embryo fibroblast cells 9, 10. 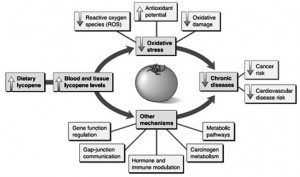 FIG. 2: MECHANISMS FOR THE ROLE OF LYCOPENE IN PREVENTING CHRONIC DISEASES

Lycopene is hypothesized to suppress carcinogen-induced phosphorylation of regulatory proteins such as p53 and Rb anti-oncogenes and stop cell division at the G0–G1 cell cycle phase 11. Astorg and colleagues  proposed that  lycopene-induced modulation of the liver metabolizing enzyme, cytochrome P450 2E1,  was the underlying mechanism of  protection against carcinogen- induced pre-neoplastic lesions in the rat liver. Preliminary in vitro evidence also indicates that lycopene reduces cellular proliferation induced by insulin-like growth factors, which are potent mitogens, in various cancer cell lines 12.  Regulation of intra-thymic T-cell differentiation (immunomodulation) was suggested to be the mechanism for suppression of mammary tumour growth by lycopene treatment 13, 14.

Lycopene also has been shown to act as a hypocholesterolemic agent by inhibiting HMG–CoA (3-hydroxy-3-methylglutaryl– coenzyme A) reductase 15. Lycopene has been hypothesized to prevent carcinogenesis and atherogenesis by protecting critical cellular biomolecules, including lipids, lipoproteins, proteins and DNA 16. In healthy human subjects, lycopene- or tomato free diets resulted in loss of lycopene and increased lipid oxidation 17 whereas dietary supplementation with lycopene for 1 week increased serum lycopene levels and reduced endogenous levels of oxidation of lipids, proteins, lipoproteins and DNA 16. Patients with prostate cancer were found to have low levels of lycopene and high levels of oxidation of serum lipids and proteins 18.

Role in Oral and General Health 19:

CONCLUSION: A brief review of the literature relating to lycopene and its role in human health is presented in this article.

ROS-induced oxidative stress is suggested as being basic to several human diseases. Antioxidants, having the ability to mitigate the damaging effects of ROS, provide an effective means of preventing chronic diseases. A naturally occurring and a potent antioxidant of recent interest, is lycopene present in tomatoes and tomato products. The major focus of studies relating to the role of lycopene in human health to date has been in the area of prostate cancer.

However, more recently, several studies are being reported in the literature on the effect of lycopene in the prevention of other cancers and coronary heart diseases. Few studies have also evaluated its role in hypertension, male infertility and neurodegenerative diseases. The role of oxidative stress and antioxidants in osteoporosis has been reported, but the role of lycopene is yet to be established.

With its broad spectrum of beneficial applications to human health, lycopene is being considered as a functional ingredient having nutraceutical properties.