Standartizated plants extracts are new opportunity in addition with standard therapy. Hawthorn extract, Tribulus terrestris extract and magnesium gluconate are forming well balanced nutritional supplement that could benefits people with cardiovascular diseases and diabetes. All three substances are well known in the common herbal medicine in our country and abroad. Their mechanisms’ of actions is pointed in this review. Some pilot studies suggest recommended dosages for all of the three substances. Side effects and drug interactions are also considered, because they are serious problem not only to the common drugs but in herbal medicines too. Interesting fact is that in mouse models the dose dependence vasodilatation from hawthorn is not impaired by common medicine like: Diphenydramine, Propranolol, Verapamil and Glibenclamide. Another issue that we consider pregnancy and risk from this three particular extracts. Many data has shown that use of this kind of supplementation could be dangerous for the mother and the child, and our device in first place is “primum non nocere”. Magnisium gluconate proven to be beneficial in combination with tribulus, and hawthorn extracts in people with different stages of heart failure and arrhythmias. Due to its hormone activity and the saponin protodioscin tribulus is used as a sex stimulant and herbal hormone substitution in women in menupause. All three substances manage to improve coronary blood flow (the most influences has hawthorn extract), improve symptoms of heart failure such as “fatigue” and “breathlessness” in people with stage I or II according to NYHA. In conclusion Macorvis preparation represents a felicitous combination of adiovant therapy and / or protection in humans predisposition to heart disease This dietary supplement offers additional benefits associated with favorable effects on sexual function and increased libido in both sexes.

Key points of the Review: Hawthorn extract and the plant as a whole, is well known in folk medicine both at home and abroad. The leaves and flowers of hawthorn contain the most important biologically active substances to which are due its effect. These substances are: oligomeric anthocyanidins, viteksin, rutin, and proanthocyanidins hiperozid mostly proanthocyanidin-B2 ¹. Due to the diversity of the herb extract its mechanism of action is not completely understood. A new study, in mouse models suggests the involvement of proanthocyanidins in the endothelium - dependent relaxation which is mediated through the production of cGMP (by activating guanylate cyclase). This leads to a significant decrease in intracellular Ca++ and relaxes vascular endothelium through the release of nitric oxide (FIG. 1) ²; 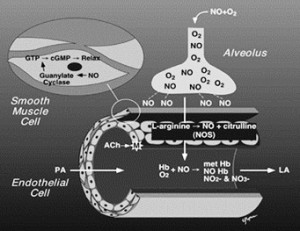 FIG. 1: MECHANISM OF ACTION AND EXOGENOUS DELIVERY OF NITRIC OXIDE (NO). (Reprinted from Advances in Pharmacology, volume 34, Wessel DL, Adatia I, Clinical applications of inhaled nitric oxide in children with pulmonary hypertension, Pages 475–504, Copyright 1995, with permission from Elsevier).

The same publication reported that viteksin, rutin, hiperozid which are all contained in hawthorn do not interfere with the process of vasodilatation. Another interesting fact discovered by Korean scientists is that the endothelial relaxation induced by proantho-cyanidin was not affected negatively by: Nifedipine, Diphenydramine, Propranolol, Verapamil and Gliben-clamide.

Currently it is clear that NO is identical to Endothelium Derived Relaxing Factor (EDRF), which is generated from the physiological amino acid arginine Well known is the positive inotropic and the negative batmotropic effect of hawthorn on the myocardium. Those of its effects are due to increased permeability to calcium ions into the cardiomyocytes and non-specific inhibition of phosphodiesterase resulting in an increase in the amount of cAMP.

That in turn leads to an increase in coronary blood flow, vasodilatation and realization of (+) inotropic effect ³. On the other hand this is leading to reducing requirement myocardial oxygen demands. Several pilot studies have evaluated the ability of hawthorn to improve physical endurance in people with heart failure type to according to NYHA (New York Hearth Association) compared to placebo. An experiment was carried out at a daily dose of 300 mg standardized extract of hawthorn for 4 and 8 weeks in which patients do not find a significant difference between extract and placebo.

A second study conducted with 78 volunteers who were taking 600 mg extract for 8 weeks. Patients reported significantly improved endurance in the physical exercise compared to placebo and decrease in blood pressure. Third study  consisting of 32 volunteers who were taking standardized hawthorn extract at a dose of 900 mg, for a period of 8 weeks also reported an increase in the threshold of physical exercise, and half of them reported reducing the symptoms like: “shortness of breath" and "fatigue" significantly compared to placebo³  a research program consisting of 1011 patients taking one tablet (standardized to 84,3 mg procyanidin) twice daily for 24 weeks, reported improvements in clinical symptoms (such as fatigue, palpitations, shortness of breath during physical exercise) 10.

CONCLUSION: Our daily dose of hawthorn maximum of 480 mg occupies the middle position of the doses tested in clinical trials so that provide the desired effect and also protect patients from the undesirable adverse effects of the herbs extracts. 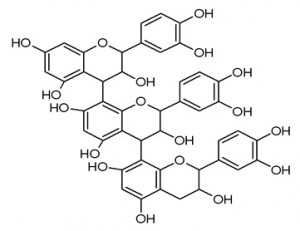 Therefore, possible additive effects may be observed, they can lead to turn over the "normal" dose of digoxin to toxic one because of it is contained in hawthorn extract viteksin.

Tribulus terrestris plant has also long been known in folk medicine in the countries of East and Bulgaria. It was used in the treatment of sexual failure.

The most active ingredients of the extract of this plant are saponins of furostanol type called protodioscin (fig. 3). 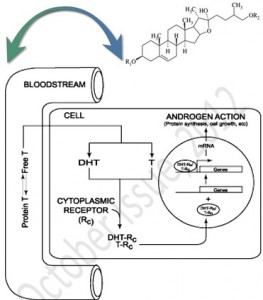 The effects of Tribulus terrestris preparations of human males and in experimental animals are well known. New data suggest that standardized extracts of Tribulus terrestris herbal substances tested in renal tissue of male rats reduces oxidative stress in them caused by ethylene glycol, and restores levels in glutathione in animal models. Other beneficial effects include reduction of renal tissue damage of inflammation and increased excretion of urate 4. Probable mechanism of action on gender’s stimulating effects of the substance is attributed to the release of NO from nerve endings innervated corpus cavernous penis. Another study in mouse models shows the release of NO as a possible mechanism, implemented and antihypertensive effects of drugs by direct arterial vasodilatation and hiperocsalurea of cell membranes 6. The herb has a strong COX-2 inhibitory activity 7.

Pharmacokinetics: Tribulus terestris extract is absorbed better with presents of food. This is due to the steroid structure of biologically active substances contained in plant substance. Theoretically absorption should increase in intake of foods with high fat, because it leads to better solubility of steroid compounds, and therefore a more complete absorption.

Adverse reactions of Tribulust terestris extract: In literature were not known statistically significant, adverse reactions and drug interactions in humans. In pilot studies was reported the occurrence of gynecomastia in men, but with extremely low frequency

GENERAL CONCLUSION: Macorvis preparation represents a felicitous combination of adjuvant therapy and / or protection in humans predisposition to heart disease. This dietary supplement offers additional benefits associated with favorable effects on sexual function and increased libido in both sexes.