MANNICHBASES: AN OVERVIEW OF HETEROCYCLIC COMPOUND WITH VARIOUS BIOLOGICAL ACTIVITIES

MANNICHBASES: AN OVERVIEW OF HETEROCYCLIC COMPOUND WITH VARIOUS BIOLOGICAL ACTIVITIES

ABSTRACT: In Organic chemistry, largest families of organic compounds belong to heterocyclic compounds. In place of a carbon atom incorporation of an oxygen, a nitrogen, a sulfur, or an atom of a related element gives rise to a heterocyclic compound. Heterocyclic compounds are of very essential for our day-to-day life. It has a broad range of applications in medicinal chemistry as well as in agrochemicals products. A Mannich base is a beta-amino-ketone, which is formed in the reaction of an amine, formaldehyde and a carbon acid, and it is a carbon-carbon bond-forming nucleophilic addition reaction and is a key step in synthesis of a wide variety of natural products, pharmaceuticals, and so forth. This literature study enlightens the fact, that Mannich bases of heterocyclic compounds  are highly reactive and are recognized to possess potent diverse activities like, anti-inflammatory, anticancer, antibacterial, antifungal, anticonvulsant, anthelmintic, anti-tubercular, analgesic, anti-HIV, antimalarial, antipsychotic, antiviral activities and so forth. In this review various biological activities of Mannich bases of heterocyclic compound derivatives reported is discussed.

INTRODUCTION: Mannich basesis a    beta-amino ketone 1, 2. It is one type of nucleophilic addition reaction, which is formed by anamine, formaldehyde (or an aldehyde) and a carbon acid 3. Mannich bases additionally go about as significant pharmacophores or bioactive leads with different potential specialists that have amino alkyl group. The instances of clinically helpful Mannich bases of aminoalkyl group are Ranitidine, Fluoxetine, Biperiden, Cocaine, Trihexyphenidyl, Procyclidine, Atropine 4–6.

The literature survey had demonstrated that Mannich bases are very reactive and it very well may be effortlessly changed over to different mixes, for instance, its diminished to frame physiologically dynamic amino alcohols 7 and furthermore it is generally utilized for development of Nitrogen-containing mixes. It gained more significance because of their application in antibacterial activity 8, 9 and used in detergent substances 10, polymers, surface dynamic agents and resins 11.

These compounds especially having five and six-membered ring, have pulled in consideration of pharmacy network throughout the years, because of their remedial value 14 and at the same time these compounds are luxuriously utilized as intermediate in organic synthesis 15-17 and the synthetic routs are monitored by the pharmacological estimation of nitrogen, sulphur and oxygen containing heterocycles 18-24.

2.1 Anti-Microbial Activity: Lingappa et al., (2008) 40 Prepared a progression of novel compound 3-(4,6-disubstituted -2 thiomethyl-pyrimidyl) – 4 - amino-5-mercapto -1, 2, 4 - triazoles 7(a-f) Fig. 1 and it has been evaluated for antifungal and antibacterial activity. The synthesized compound on reaction with amines N Mannichbase 7 (a-f) obtained rather than S Mannich base, and it also been reacted with aldehydes to obtain schiffs base. The novel blend shows excellent antifungal and antibacterial activity. 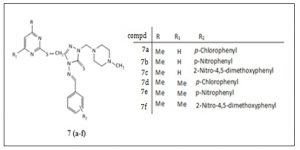 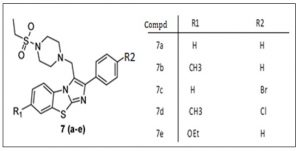 Maddili SK et al., (2017) 41 Synthesised imidazole [2, l-b] benzothiazoles were set up through one-pot multi-part response within the sight of water as an eco-accommodating dissolvable Fig- 2. All the integrated mixes were affirmed from1HNMR IR, 13CNMR, and Mass spectroscopy. These discoveries showed that compound 7c showed great antifungal adequacy while compound 7b uncovered noteworthy enemy of microbial activity. What is more restricting conduct of compound 7b was explored by restricting investigation between calf thymus DNA and compound 7b by UV-Vis ingestion spectroscopy and further research about HSA communications was completed.

Sharma P et al., (2019) 42 Synthesized novel heterocyclic 1, 3, 4-thiadiazole Fig. 3 and the organized blends were portrayed by1H NMR, IR, UV Spectroscopy. The result has shown that the blends are unique against pathogens under assessment and were nontoxic. The quieting development of the compound was evaluated by the paw edema method using the standard medicine diclofenac sodium. Compounds 7b and 8c shown amazing moderate and agony easing pharmacological activities. Which shows extraordinary lipophilic properties inside electron rich morpholine ring in Mannich base. 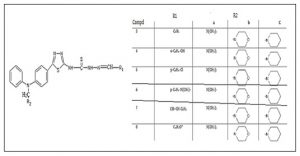 Alptüzün V et al., (2009) 43 Synthesized some subbed benzylidene hydrazinyl pyridinium subsidiaries bearing benzyl, ethylphenyl, and propylphenyl bunches on the pyridinium nitrogen. The synthesized compounds were tested for their antifungal and antibacterial activity. Antimicrobial test outcomes showed that mixes containing a 3-phenylpropyl chain showed the most powerful antimicrobial action, and the compound 3d was the most dynamic in the arrangement against every tried bacterium and parasites strains. 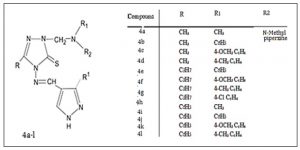 Frank PV et al., (2013) 47 by using 2-methyl-4-nitro-imidazole as a beginning material synthesized, a new 5 - (2- Methyl – 4 – Nitro -1- Imidazomethyl)-1, 3, 4-Oxadiazole – 2 – thione. Fig. 5 and was   presented to Mannich reaction with appropriate amines to yields another course of action of 3-substituted amino methyl-5 - (2- Methyl – 4 – Nitro -1- Imidazomethyl)-1,3,4-Oxadiazole – 2 – thiones. The synthesized compounds were evaluated for their antifungal and antibacterial activity. Huge quantities of these blends demonstrated extraordinary antifungal activity.

Bogdanov, A.V et al., (2016) 48 Synthesized a is indigo derivatives Fig. 6 by using isatin with monosubstituted piperazines and formaldehyde. Subsidiaries of 1-piperazinomethylisatins, combine to form new is indigo subordinates. The synthesized subordinates were assessed for the antimicrobial activity, and it shows an excellent action.

Kumar SV et al., (2013) 49 Benzimidazole mixes were synthesized from the build-up response between ortho phenylenediamine and various acids Fig. 7. The excellence of the blends was resolved (TLC).

Among the readied blends, compound (b) and 5Ewas developed to be the most extraordinary against each attempted microorganism, and these 2 blends indicated complete bacterial DNA cleavage and non-harmful.

Bala S et al., (2014) 50 Benzamide substituted Mannich bases were synthesized Fig. 8 and affirmed by UV-Visible, FTIR, TLC, Mass and NMR spectroscopic  frameworks and screened  for their in-vitro antibacterial activity by test tube weakening system utilizing cefixime and amoxicillin as standard. The blends 5, 6 and 7 where seen as the most impressive antibacterial executives among all the solidified blends.

Goekce M et al., (2005) 52 Novel pyridazinone derivatives were synthesized and screened for anti-inflammatory activity and pain relieving activity. The structures of these new pyridazinone were confirmed by their1H-NMRand IR spectra and simple examination. Among the blends (IVe)2 - [4 -(4-fluorophenyl) -1-piperazinyl] methyl] -6- (4-methoxyphenyl)-3(2H) pyridazinone was viewed as a most reassuring mitigating movement and pain-relieving action. Lohitha P et al., (2011) 53 Synthesized hydrazones of indole by rewarding indole-3-carbaldehyde with hydrazine hydrate. Furthermore, the organized assistants were treated with different aldehydes of Schiffs bases and different amines of Mannich bases in the nearness of formaldehyde and dimethylformamide. The planned mixes were depicted by MASS, FT-IR, and 1H NMR spectra. Schiff's bases of indole derivates were exhibited commendable antifungal and antibacterial activity; jointly, Mannich bases of indole assistants were researched for calming movement and pain-relieving action. It has been announced that the recently blended Mannichbases like B3, B6, and B7 with electron attracting groups like, chloronitro, displays better calming and pain-relieving movement.

Malinka W et al., (2005) 54 Synthesized the series of 4-aryl piperazine assistants of Mannich base Fig. 9 and their non-4-aryl piperazine analogs (3 and 4). The synthesized compounds were analyzed for their analgesic action.  In the arrangement of 4-arylpiperazine subordinate an electron attracting substituent moiety produces a more significant pain relieving impact than their unsubstituted precursors (compare 4e and 4f). The introduction of second electron attracting substituent (EWG) doesn’t cause an increase in activity (compare 4a and 4c).

Chakkaravarthi K et al., (2013) 55 1-(1H-benzo(d)imidazole-1-yl)methyl urea (BIUF) and 1-(3-hydroxynaphthalen-2-yl) methyl thiourea (TNTUF)(Fig10) were synthesized and  depicted by 13C NMR,1H NMR, UV-Vis, FT-IR, MASS and Elemental assessment. The synthesized compounds were shown better antimicrobial and anti-oxidant activity. The combined Mannich base compound BIUF shows up better antimicrobial and antioxidant activity than TNTUF due to the presence of two   N atoms,  and heteroatoms combined with an amide group.

Jagadish PC et al., (2013) 56 Microwave-assisted Mannich base of pyrazoline derivatives 3(a–e) Fig. 11 were synthesized and depicted by NMR, UV, Mass, IR spectroscopy. The results were excellent in microwave-assisted procedure over old-style warming one. All the blends were found in consistency with Lipinski rule of five, and the mixture contains para hydroxy substitution (3e) exhibited the best anti-oxidant activity.

2.4 Anthelmintic Activities: Bamnela RI et al., (2012) 57 Benzimidazolyl substituted isoindole derivatives 5(a-i) with different amines and methanol Fig. 12. have been synthesized and evaluated for their anthelmintic, insecticidal, and antimicrobial activities against microorganism and compared with standard medication. All the incorporated N-Mannich bases have appreciable anthelmintic, insecticidal, and antimicrobial activity.

The result reveals that most of the blends were basically reduced in the blood glucose level and irritation of paw volume when comparative evaluations done with standard drug.

Okombo J et al., (2019) 62 Integrated a novel pyrido (1,2-a) benzimidazoles Fig. 16 bearing Mannich base side chains and their metabolitieswere consolidated and evaluated for in-vitro microsomal metabolic sufficiency, antiplasmodium activity, open metabolite (RM) improvement, and in-vivo antimalarial in a mouse model. The in-vivo adequacy of these subordinates is likely a result of their dynamic metabolites, two of which demonstrated extreme in vitro anti-plasmodium activity.RM (rapid metabolism) getting examinations recognized glutathione adducts just subordinates bearing 4-aminophenol moiety. As with AQ(amodiaquine), exchanging the spot of 4-hydroxy and Mannich base side or substituting the 4-hydroxy with fluorine atom seems to block bioactivation of the  AQ-like auxiliaries anyway to the disservice of anti-plasmodium activity, which was in general brought down.

2.8 Anti-cancer Activity: Hu G et al., (2012) 63 Planned to make novel anticancer fluoroquinolones from antibacterial analogs by introducing the heterocyclic ring as a bioisostere of the C-3(COOH) group. To this end, two plans of (11) S-triazole subordinates bearing functionalized side chains of Mannich bases and Schiff bases were organized and orchestrated. Structures were depicted by basic assessment and extraordinary data obtained when it is assessed with in-vitro antitumor activity.  Blends having the free phenol bundle were particularly unique and warranted further new development.

Analogs of (5a) and (5g) show the extraordinary cytotoxicity for the HeLa cell line and 6 cyano group (5m) for the CaSki cell line.

Moreover, compounds (5a) and (5e) appeared with the tremendous cytotoxicity, and compound 5(a) were found active in both antioxidant and cytotoxicity activity.

The two promising compounds 3c and 3fwere studied in the HepG2cell line. Among that, the compound 3f of the course of action could be considered as the potential lead for its progression as a novel anticancer agent.

3.0 Antitubercular, Antiprotozoal, and anti-HIV Activity: Ali MA et al., (2007) 67 Combined oxadiazole Mannich bases Fig. 20 by responding dapsone, oxadiazole subsidiaries, and proper aldehyde within sight of methanol. The purity of the synthesized compounds were checked by chromatography (TLC), and confirmed the structure by 1H NMR and IR. The orchestrated mixes were assessed for their antimycobacterial activity against mycobacterium tuberculosis. Among the synthesized blends, compound (4) had great anti-tuberculosis activity.

Sriram D et al., (2006) 68 . Synthezied progression of pyrazinamide (PAZ) Fig. 21 by using formaldehyde, PAZ, and different substituted piperazines. The incorporated blends were surveyed for in-vitro and in-vivo antimycobacterial activity against Mycobacterium tuberculosis. Among the fused blends, compound (17) was viewed as the most encouraging compound.

Patel VM et al., (2018) 69 With microwave-assisted  and conventional method, 4-(4-fluorobenzylidene) amino) -5-(pyridin-4-yl) – 4H -1,2,4-triazole -3- thiol(Fig-22)were synthesized and examined for in-vitro antitubercular, antimicrobial and antiprotozoal action. The compound 4kwas viewed a general unique, and 4 g indicated ground-breaking, and the compound4bdemonstrated sublime power against M. tuberculosis in the fundamental screening. The computational exam revealed for that Mannich auxiliary (4b) showed a high loving towards the dynamic site of protein which gives a strong stage to new structure-based arrangements attempts.

Sriram D et al., (2009) 70. Microwave-assisted efavirenz Mannich base derivatives Fig. 23 has been synthesized by reacting formaldehyde, secondary amine, and aryl-substituted piperazines. The synthesized blends were evaluated for their in-vitro against HIV and antimycobacterial action. Among that, compounds having fluroquinolone moiety were found to be challenging and (4i) limited to M. tuberculosis with the least inhibitory concentration.

ACKNOWLEDGEMENT: The authors are thankful to the management, Director, Principal, and faculties of R. R. College of Pharmacy, Chikkabanavaram, for rendering the requirements in this work.