Aim: The aim of the study was to determine the outcomes and complication of preeclampsia syndrome in pregnancies

Methodology: It was a Prospective observational study conducted at Indira Gandhi memorial hospital, Shirpur, Dhule. In this study a total 971 primigravida and multigravida pregnant women was observed out of which, 73 preeclamptic pregnancies were reviewed from July 2009 to February 2010. All study related data collections were conducted in accordance with Ethical background for Investigations of the preeclampsia syndrome.

Conclusion: The study conclude that the preeclampsia syndrome still the cause of maternal morbidity and neonatal mortality and morbidity, there is a need of early diagnosis, role of patients which helps to reduce the risk of pregnancy complications.

INTRODUCTION: Around 5-7% Preeclampsia complications were observed in all pregnancies diagnosed from mid pregnancy but derived from1st trimester pathology 1. Preeclampsia is a severe complication of pregnancy, commonly defined as de novo hypertension and proteinuria before 34 weeks gestational age. Early onset of preeclampsia is a potentially life-threatening disease for both mother and baby 2, 3. The preeclampsia is multisystem disorder, in severe condition eclampsia was observed in end of pregnancy and HELLP syndrome physical changes was observed, including the breakdown of red blood cells, changes in liver and low platelets 4.

7% Preeclampsia affects of first pregnancies which leads to cause of maternal death and a major contributor to maternal and perinatal morbidity. Preeclampsia (PE) is associated with maternal perinatal morbidity and mortality and affects 5% to 7% of pregnant patients worldwide. Hypertension complicates about 7±13% of all pregnancies. Preeclampsia syndrome can be diagnose mainly by blood pressure (>140/90 mmHg or more than), Proteinuria (> +2 dipstick), edema, renal dysfunction, liver disorder, etc. are the diagnosis parameters to find out preeclampsia severity in women and for the fetus birth. Up to 18% of foetal deaths are associated with hypertensive disorders 5.

MATERIAL AND METHOD: 971 cases of pregnancy were admitted at Indira Gandhi Memorial Hospital, Shirpur, Dhule from 16 Jul 2009 to 28 Feb 2010. In this study preeclampsia syndrome were recruited in the study and it was approved by Institutional Human Ethics committees of R. C. Patel Institute of Pharmaceutical Education and Research. There had been 971 cases kept of which 898 women were from normal group and 73 women from preeclampsia group. The 7.51% incidence of preeclampsia was observed in pregnancies. The data of pregnant women from 6th month up to 9th month was taken for their regular check up. In 971 cases preeclampsia and normal pregnancy cases were reviewed in two groups, 73 from preeclampsia and 898 from normal pregnancy. According to the inclusion and exclusion criteria of all pregnant women are consider in this study and secondary cause of hypertension they were excluded. The data were categorized according age, month of pregnancy, pathological parameters, socio-economical background, mode of delivery, neonatal outcomes.

Statistical Analysis:  The data on HELLP syndrome and eclampsia were analyzed using mean and standard deviation, the analysis of other parameter in between two groups normal and preeclampsia was followed by student unpaired t-test.

The disease progression to severe preeclampsia occurs from mild hypertension (Table 3). In the sonographic diagnosis, the maximum women sonographic report having the cephalic presentation in their sonography. Only the changing lie report found to be in preeclampsia group the results which are getting form the sonographic evaluation not shows much difference in the between two groups (Table 4). HELLP syndrome in preeclampsia group diagnosed with the severe hypertension, the platelet count was lower than normal range ≥1 lacks. Hemoglobin count lower most of women were anemic 7.40±0.53 and liver enzymes were elevated, SGPT level increased doubled than normal 80.17±41.96 and SGPT level also increased up to 47.95±8.2. In eclampsia diagnosis, 6 women were having eclampsia and HELLP syndrome and 1 women having only hypertension the women which suffers from eclampsia they having severe hypertension, anemia, low platelet count, also show the symptoms of elevated liver enzymes, the data suggest that the eclampsia observed at sever level of preeclampsia (Table 5). Pathological diagnosis of proteinuria in between normal and preeclampsia group shows the incidence of high level of proteinuria was found to be in preeclampsia group, the report shows trace amount to 3+ dipsticks proteinuria in preeclampsia it was higher than normal range (Fig. 1). Statistical difference in both groups shows the significant results. The age difference from both groups was not significant groups not having the much difference between two groups.

TABLE 1: THE COMPARISON OF RISK AND COMPLICATION IN PREECLAMPSIA GROUP AND NORMAL GROUP

TABLE 2:  DISTRIBUTION SOCIOECONOMIC STATUS IN BETWEEN NORMAL AND PREECLAMPSIA GROUP

TABLE 3: NUMBER OF CASES IN DIFFERENT CLASSES OF PREECLAMPSIA

TABLE 4: CORRELATION OF SONOGRAPHIC REPORT WITH PREECLAMPSIA AND NORMAL PREGNANCY

TABLE 5: HELLP SYNDROM AND ECLAPSIA DIAGNOSIS ON THE BASIS OF PATHOLOGICAL AND BLOOD PRESSURE TESTING 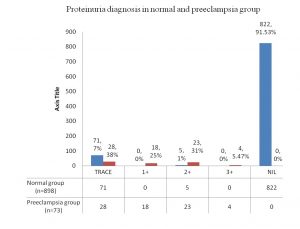 DISCUSSION: Noreen Akmal and Gul-E-Raanain in their study reported incidence of younger’s and primigravida in the age of patients in normal group I was below 20 years in 45% patients while 66% patients in group II were below 20 years and primigravidas 62% and in those who belong to low socio-economic class 75%, in our study it was 58.90% of primigravida and 17.80% in low socio-economic class, middle class 76.71% and  61.69% in normal group and 61.64% in preeclampsia group of age 18-22 years  the incidences was observed in younger’s. Estimated results from our study the younger’s, primigravida, middle class and poor class shows the high risk of preeclampsia syndrome 6.

The most of pregnancy were observed as caesarean mode of delivery. The result obtained in this correlation was n=807 (89.89%) normal vaginal delivery and n=91 (10.13%) caesarean section in normal group. The preeclamptic group cases was higher than normal group, n=25 (34.24%) normal vaginal deliveries and n=48 (65.75%) caesarean section in preeclamptic group. Tan et al., showed the evidence of preeclampsia, the preterm of delivery was the commonest problem. The incidences of caesarean delivery were higher than control group 12.

Rath et al., found out in HELLP syndrome, elevation of liver enzymes, low platelet count and hemolysis was observed. In our study it was observed in n=6 (8%) cases in preeclamptic group n=73. The systolic blood pressure was 167.17± 5.08 mmHg and diastolic blood pressure was 104.33±2.94 mmHg. The pathological report was shows heamolysis, elevated liver enzymes, low platelet count the values are 7.04±0.53 gm%, SGPT 80.17±41.96 IU/dl, SGOT 47.95±8.198 and 1.06±5.08 respectively 13. The past evidences studied, the HELLP syndrome is associated with increase in maternal and perinatal mortality & morbidity 14. The eclampsia in preeclampsia was observed in n=7 (10%) cases. The eclampsia was observed in sever preeclampsia, the severe preeclampsia range of hypertension was found to be systolic 167.17±11.84 mmHg and diastolic 104.33 ±3.43 mmHg. Sandhu et al., in their study reported the incidence of eclampsia and it was found 5% of patients who had eclampsia, which contributed to 8.3% of maternal mortality and this is comparable to some reported studies 15.

Pathological Investigation: In this study the Hb% was lower in preeclampsia group than normal group, the 9.22±1.08 Hb% in normal group and in preeclampsia group it was 8.87±1.53 Hb%, p<0.0124. Singh et al., in their study reported, in preeclampsia, anemia was not significant and by reducing plasma volume, reduces the supply of nutrient to the fetus thus affecting fetal growth. The preeclampsia syndrome and low birth weight having the correlation with low hemoglobin level 16. Boehm et al., in their study suggested the evidences that due to platelet agreeability, the platelet count lower in the whole blood.

In our study platelet count was measured in both group, it was observed that 3.05±0.71 lakes in normal group and 2.19±0.59 lakes in preeclamptic group, the significance was p<0.0001 17. In our study the serum creatinine was found to be 1.15±0.27 mg/dl in normal group and in preeclampsia group it was 1.37±0.25 there is elevation in the preeclamptic group. The significance was p<0.0001. Lelia Duley in their diagnosis of pre-eclampsia is strengthened if there is further indication of multisystem involvement, such as raised serum creatinine 18.

Alam et al., reported evidences of the complication related to the neonatal outcomes includes the IUGR (Intrauterine growth retardation), IUD (Intrauterine death), still birth was observed in preeclampsia or in hypertensive disorder in pregnancy.  In our study 8 (0.89%) cases in the normal group and in preeclampsia group 1 (1.3%) case of IUD were observed. Still birth record shows, 8 (10.95%) in preeclampsia group and 0% in normal group. Solange Regina Perfetto Chaim, et al., found out there was correlation in between eclampsia and neonatal complication. In our study eclamptic mother, the neonatal outcomes like low birth, still born were observed 19, 20.

CONCLUSION: The study conclude that the preeclampsia syndrome still the cause of maternal morbidity and neonatal mortality and morbidity, the low socio-economical status, low educational status, primigravida, and younger’s having the risk of preeclampsia. The pathological testing and sign and symptoms help to reduce the risk of pregnancy complication. The early diagnosis useful for reduce maternal complication.