Methods: This study was done in CDRI, Lucknow. In this study β-galatosidase was extracted by Kluyveromyces lactis and enzyme assay done by GOD/POD method. Partial purification of enzyme was done by precipitation with ammonium sulphate, DEAE-cellulose column chromatography followed by SDS-PAGE. Immobilization of K. lactis cells was done by Entrapment method in which we agarose beads, plyacrylamide beads and alginate beads were used to analyze the catalytic activity of β-galatosidase on different parameters.

Results: In this study the effect of temperature, pH, and amino acids on normal β-galatosidase and on immobilized β-galatosidase were analyzed. Immobilized enzyme showed the decreasing conversion level of lactose. We used three types of beads to analyze the activity of enzyme in which polyacrylamide beads showed decreasing conversion level of lactose at different concentration of lactose and same concentration of beads. Effect of temperature on β-galactosidase was maximum at 40oC for growth. pH profile (6.2 to 7.4) of β-galactosidase was studied at 28oC & 37oC. Highest lactose conversion (4.44%) was noted at pH-6.8.

Conclusion: It was found that the β-galactosidase from K.lactis showed an optimum activity at temperature 40oC, pH 6.8. The extracted sample was loaded in to the SDS page along with the marker. The fine band was observed. This showed the purity of the β-galactosidase. Permeabilization of the cell wall with chloroform increased the enzyme activity. The immobilized non-viable permeabilized cells give better result than viable immobilized cells.

INTRODUCTION: The enzyme β-D-galactosidase (lactase) is a lactose hydrolyzing enzyme (lactase, EC 3.2.1.23). It acts on lactose by splitting the glycoside bond between the anomeric atom of galactose and C-4 carbon of glucose residue. The economic interest in this enzyme is related to its use in food and pharmaceutical industries, because of the deficiency of b-galactosidase in many people. The sources of β-galactosidase ranges from plants, micro-organisms and even animals.

Among the microbes bacteria, fungi and yeast are good source of β-D-galactosidase. With few exceptions, β-galactosidase, is an intracellular enzyme produced by many micro-organisms that use sugar to produce energy. Techniques pioneered by genetic engineering may improve the availability of desirable enzymes from micro-organisms. β-D-galactosidase catalyzes the hydrolysis of the milk sugar lactose in to its constituent’s monosaccharide’s glucose and galactose. In addition these two major reaction products, small amount of di and tri saccharides are produced as a result of transgalactosidation reaction particularly at high concentrations.

However, these byproducts are eventually hydrolyzed after prolonged treatment. The major difference between the yeast and fungal enzymes is the optimum pH for hydrolysis. Yeast enzymes have optimum activity in the range pH 6-7, while optimum for fungal enzyme is pH 4-5.Both yeast and fungal enzymes are inhibited by one of the reaction products galactose.  Kluyveromyces lactis are important industrial yeasts in classical applications with biomass, ethanol, enzymes and single-cell protein production 1-3. K. lactis offers higher b-galactosidase activity than other yeasts. 4

A numbers of minerals have a profound effect on enzyme activity 5, 6. Both fungal and yeast enzymes are inactivated by heavy metals, e.g. Copper 7-10 , Zinc 9-13 , Nickel 14-16 and the yeast enzymes in particular are also inhibited by sodium and calcium ions. The effect of the latter can be reduced through the addition of phosphates to complex the calcium and through the heat treatment of milk or whey to precipitate calcium as calcium phosphate.Other minerals ions are responsible for increasing the activity of β-D galactosidase 17-21. The most important activators are potassium, manganese ions 22, 23.

Optimum concentrations these cations lie in the range of 10-2 to 10-1M for potassium, 10-3 to10-4M for magnesium and 10-4. The molecular weight of Beta-D-galactoidase from K. lactis was estimated to 215000 by disc gel electrophoresis. The enzyme from K. lactis has a molecular weight around 200KDa as estimated by Gel Permeation chromatography and is a dimer. Immobilization is a technique in which enzymes and cells are associated to an insoluble reaction matrix so that they can be retained improper reaction geometry for its economic reuse under stabilized conditions. The effect of immobilization can be observed on retention of activities and the effect of stability.

In other words immobilization techniques mean restricting the movement of cells or enzymes by fastening them to a solid carrier, the fluid surroundings the particle can be moved fast without fear that the cell or enzyme is washed away. We can increase the half life and stability of cell and enzyme by immobilizing it. We can further use them for industrial purposes. In this case we can reuse the cell or enzymes again and again. This process is yet another one of the most advantageous technique for fermentation.

Many bacteria, fungi and yeasts, are good source of enzyme β-D-galactosidase. The intracellular enzymes have narrow pH stability in the range of 6.5 to 7.5. Thermal stability of these enzymes lies below 400C. Hence their application is limited to the treatment of lactose in sweet whey or milk.

Microorganism & Culture media: Kluyveromyces lactis (MTCC_117) used throughout this study. The strain is maintained on Yeast-Malt agar slants stored at 4ºC and transferred monthly to fresh slants incubated at 30ºC for 2 days. Two wire loops of culture were taken from fresh slants and transferred to 250 ml Erlenmayer flasks containing 50 ml of culture broth which had been sterilized at 121oC for 15 min.

Fermentation conditions: Fermentations were carried out batchwise in 250 ml flasks using 50 ml of fermentation medium sterilized at 121ºC for 15 min. The flasks were inoculated with the pre-inoculum volume (2%) to give an initial cell concentration between 0.05-0.1 g l-1. The cultures were incubated at 30ºC for 48 hrs in a rotary shaker incubator (Emenvee Engineer’s Pune, India) operated at 200 rpm.

Enzyme Extraction: Samples of 1 mL of cell suspension containing 2.62 mg of dry cell in phosphate buffer (0.1 M, pH=7.3) were ultrasonicated (Unique MaxiClean 700, Brazil) for 10 min with 1.1 g of glass beads (r<0.4 mm). During this treatment, the temperature was kept between 0 and 4 °C. The suspension was centrifuged at 5200´g for 10 min at 4 °C, and the supernatant was assayed for β-galactosidase activity.

β-Galactosidase assay: The β-galactosidase activity was measured by using o-nitrophenyl-b-D-galacto-pyranoside (ONPG, Sigma-Aldrich) Spectrophoto-metrically by the method of Food Chemical Codex (22) as well as manually by GOD/POD method and standard curve was found. 100 mg/ml of lactose solution prepared on the buffer indicated was added to soul of cell suspension (100 mg/ml) prepared on the same buffer. Amount of added solution varied in different studies. Tubes were incubated at 370C for 15 minutes with shaking, after which contents were centrifuged and 1 ml of supernatant was extracted. Hydrolysis of lactose followed by glucose estimation through GOD/POD reaction. Assays were performed in phosphate buffer and reactions were stopped by addition of 1M Na2CO3 and measurement of absorbance at 540 nm was used for detection of β-D-galactosidase activity on cell free extract.

β-D-galactosidase catalytic activity ten checked in above all three types of beadsby following method. Fresh cells of k.lactis were grown, harvested and immobilized, 2% lactose solution was prepared in PPB-Mn (50Mm) buffer and ph-6, 8.

Different conc. of lactose solution was taken in the 250 ml capacity of flask and 53 mg beads were added and incubated at 280C for 20 minutes of incubation on shaker. Quantity of hydrolyzed lactose was detected by estimation of glucose by GOD/POD reagent. In which weight of beads was 53 gm and dry weight of biomass 10 mg were taken.

RESULTS: The present work done on studies of β-galactosidase from the yeast in normal cells as well as immobilized cells under various growth conditions. For glucose estimation with GOD/POD by using the supernatant of the sample K. lactis, we found the color complex & straight line in graph at 540 nm (figure 1). Glucose conversion at different substrate concentration with definite amount of enzyme at constant temperature & time. It was found that the rate of reduction was maximum at substrate conc. of 100 mg/ml. As the substrate conc. reached a Vmax the maximum sites of enzyme were fully saturated with substrate and hence even an increasing the substrate concentration the enzyme activity remained constant.

Effect of temperature on β-galactosidase was maximum at 40oC for growth (Table 1, figure 1). After it the enzyme was deduced.  pH profile (6.2 to 7.4) of β-galactosidase was studied at 28oC & 37oC. Highest lactose conversion (4.44%) was noted at pH-6.8 (Table 2, figure 2). The study on β-galactosidase showed that enzyme from K. lactis is an inducible one. Lactose is known to induce the enzyme. In our results, glucose produced by cell grown in lactose medium was almost three times more than that the produced by the cell grown in different carbon (sugars) & nitrogen (amino acid) sources. 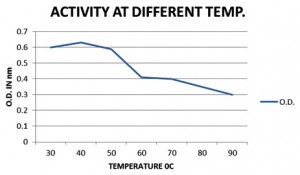 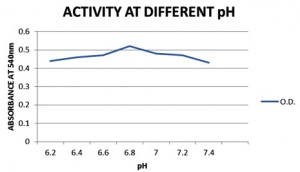 Enzyme activity was better after permeabilization, due to the cell membrane become leaky for the free diffusion of substrate & products across the cell envelop (figure 3). 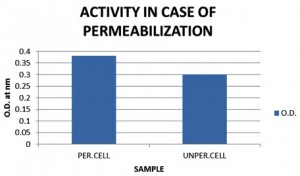 FIGURE 2: ACTIVITY IN CASE OF PERMEABILIZATION 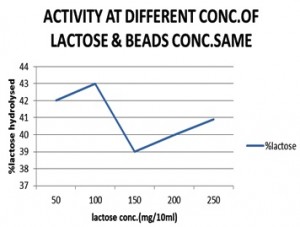 CONCLUSION: The present study deals with the extraction of β-galactosidase by yeast K.lactis with regards of various steps involved in the extraction. The K.lactis cells were inoculated in to the production medium, incubated and the cells were harvested, washed with PPB (Potassium Phosphate buffer).Now cells were used for β-galactosidase production. Cells were sonicated and dialyzed and stored in the 4oC temperature to avoid the deactivation of the enzyme and protein.

It was found that the β-galactosidase from K.lactis showed an optimum activity at temperature 40oC, pH 6.8, without sonicated. Dialyzed sample was passed through the DEAE-cellulose column for the further purification.

The extracted sample was loaded in to the SDS page along with the marker. The fine band was observed. This showed the purity of the β-galactosidase. Permeabilization of the cell wall with chloroform increased the enzyme activity (Table 3).