ABSTRACT: Chronic Kidney Disease is a considerable problem requiring coincident use of several medications in order to manage the condition and co morbidities. Medication adherence rate are diminished by complex drug regimens. Generally poly pharmacy fabricates chances of poor adherence and adverse drug reactions (ADRs). In Chronic Kidney Disease (CKD) functioning of kidney is poor and decreased elimination of drugs leads to serious consequences. In this study 144 CKD patients were enrolled. The mean age was found to be 54.97 (±13.425). CKD was more common in male (66%) than female (34%). Majority of the patients were diagnosed with Hypertensive Kidney Disease and Diabetic Kidney disease and using 4 to 6 drugs concurrently. This shows that hypertension and Diabetes are the main risk factor for CKD in these patients. Most of the patients enrolled in the study were diagnosed with CKD for more than 3 years.  Patients with CKD were commonly using the drugs like Antihypertensives, Antidiabetics and other cardiovascular drugs. Most of the patients were highly adherent to the medications prescribed. No major ADR was found in the patients enrolled due to the impact of poly pharmacy. High medication adherence and low ADR incidence found in patients enrolled in this study and is mainly because of the better patient care in the Nephrology Department. Patients were well educated about their disease and the importance of medication taking. ADR is less common because of the monitoring drug therapy

INTRODUCTION: Chronic kidney disease is a progressive loss in renal function or structure which requires concurrent use of several medications because of co morbidities like hypertension and diabetes. When advanced it carries a higher risk of mortality 1. Diabetes and hypertension responsible for up to two thirds of cases 2. In the setting of chronic kidney disease, patients experience high pill and treatment burden. Poly pharmacy is unavoidable because of the multiple co morbid conditions.

The study was designed as a Cross-sectional study in the Department of Nephrology, Govt. Medical College, Kozhikode, India. The study protocol was submitted to the Institutional Ethics Committee and was approved by the same. The study was conducted over a period of six months from July 2013 to December 2013. Patients visiting outpatient department of nephrology and   were diagnosed with CKD and using two or more drugs were enrolled in the study.

In this study CKD was more common in male (66%) than female (34%).  Men are more prone to develop chronic kidney disease (CKD) and to progress to end-stage renal disease than are women, when all-cause incidence rates are considered 6. Majority of CKD patients were in the age group 61-70 years (table 1). The mean age was found to be 54.97 (±13.425). The maximum and minimum age included in the study was 81 and 9 years respectively. CKD is more common in older population especially age of 70 years 7. Out of 144 patients enrolled, 20 men had a history of alcoholism and 6 were present alcoholic. All the female patients were free from the alcohol consumption.  Alcohol consumption will increase the risk of CKD by increasing the level of albumin and uric acid in the serum 8. Out of 95 men enrolled in the study, 41 (43.16%) had a history of smoking and 18 (18.95%) were present smokers. None of the females were smokers or past smokers. Most of the patients were unemployed because of the disease condition. 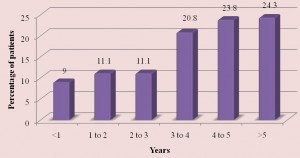 The study shows that 49 (34%) patients were diagnosed with Hypertensive Kidney Disease and 37 (25.7%) with Diabetic Kidney disease (Table 2).  Hypertension and diabetes are the main risk factor for CKD 9. Other common co-morbidity was coronary artery disease and chronic obstructive pulmonary disease. Dyslipidaemia, cancer and hypothyroidism were found as less common (Table 3).

Major poly pharmacy is common (61.80%) in CKD patients (Table 4). This is mainly because of the co-morbid conditions associated with CKD. This is an unavoidable poly pharmacy. Out of 144 CKD patients enrolled, 132 (91.7%) were using antihypertensive drugs, 35 (24.3%) were using antidiabetic drugs and 52 (36.1%) using other cardiovascular drugs. Majority of them were also prescribed with sodium bicarbonate tablets. The commonly used antihypertensive drug in the descending order is Amlodipine (34.09%), Telmisartan (26.51%), Cilnidipine (20.45%), Clonidine (20.45%), combination of Telmisartan & Hydrochlorothiazide (8.33%) and Carvedilol (6.81%).

Insulin (45.71%) is found to be most commonly prescribed antidiabetic drug in CKD patients. Others were glipizide (28.57%), glimepiride (25.71%), metformin (22.86%), Atorvastatin is found to be commonly used hypolipideamic agent. Other cardiovascular agents prescribed were atorvastatin, aspirin, diltiazem, clopidogrel, nitroglycerine and isosorbide dinitrate.

CONCLUSION: The study concluded that CKD is one of the important diseases seen among the common people. Hypertension and Diabetes are the main causes of this disease. 88.2% of patients were highly adherent to therapy.