INTRODUCTION ON BENZIMIDAZOLES: Benzimidazole Fig. 1 is a heterocyclic aromatic organic compound. This bicyclic compound consists of the fusion of benzene with imidazole. Historically the first benzimidazole was prepared by hoebecker in 1872, who obtained 2,5 or (2,6) dimethyl benzimidazole. The benzimidazoles are also known as benzoglyoxalines. This tautomer is analog to that found in imidazole and amidines. The benzimidazole is, in fact, may be considered as a cyclic analog of amidine Fig. 2.

1.1. Medicinal Applications of Benzimidazole Analogues: Most of the benzimidazole analogs are also known for their clinical use. Some of them are as follows. 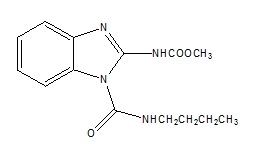 Benzimidazole derivatives such as benomyl Fig. 3, carbendazim Fig. 4, fuberidazole Fig. 5 and thia-bendazole are developed as fungicides which have high activity against many opportunistic fungi.

1.1.2. Benzimidazole Analogues as Analgesic, Anti-inflammatory, and Antipyretic Agents: In recent years, much effort was devoted to studying the analgesic drug etonitazene, a benzimidazole analog selectively interacting with opiate receptors of the µ-subtype 11-15. Etonitazene Fig. 6 is a highly potent analgesic drug, has approximately 1000-1500 times more potency than morphine. However, it has a strong dependency potential similar to that of morphine, and a strong tendency to produce respiratory depression and is therefore not used in humans. It is, however, useful in addiction studies on animals. 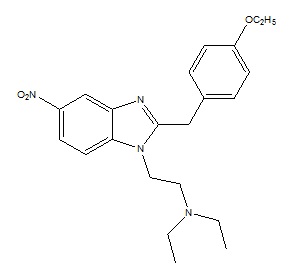 1.1.3. Benzimidazole Analogues as CNS Depressants: Some benzimidazole derivatives produce various, in type and strength, effects upon the central nervous system, including psycho-stimulant, neuroleptic, antidepressant, tranquilizer (anxiolytic), anticonvulsant, and hypnotic action. It was shown that dibazole and 5,6-dimethyl-benzimidazole (dimedazole, dimezole) Fig. 9 are capable of eliminating some neurological disorders accompanying experimental brain traumas and can be used for the prophylaxis of pain shock 19. A single administration of bemithyl, ethomerzole (5-ethoxy-2-ethylthiobenzimidazole hydrochloride), and 2-phenylthio-6-ethylbenzimidazole hydro-bromide Fig. 10 also produced an anxiolytic action not accompanied by sedative effects 20. 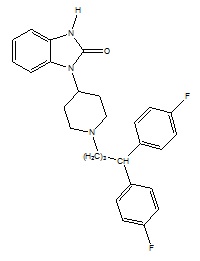 Pimozide Fig. 11 is capable of inhibiting the release of dopamine-induced in-vitro by electric depolarization of membranes in the brain tissue 21 and enhances dopamine synthesis and circulation in the brain 22, 23. The effect of pimozide on other catecholamines is less pronounced. In the human organism, pimozide reduces amphetamine-induced euphoria and arrests anxiety manifestations in schizophrenes and patients with psychic disorders of a neurotic type 24, 25.

1.1.4. Benzimidazole Analogues as Antihypoxic and Antioxidant Agents: Some benzimidazole derivatives are capable of exhibiting antihypoxic and antioxidant activities. For example, ethomerzole exhibited a protective effect in tests on animals having different degrees of resistance with respect to hypoxic states and accelerated the restoration of behavioral, dynamometric, and locomotor characteristics in animals upon hypoxic trauma 26.

1.1.5. Benzimidazole Analogues as Antiaggregant Agents: Diabenol is capable of inhibiting platelet aggregation induced by ADP, adrenalin, collagen, PAF, and arachidonic acid, which is explained by suppression of the synthesis of thromboxane A2. It was reported that diabenol not only influences the aggregation process but produces a certain disaggregating effect as well 27. 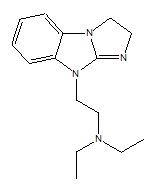 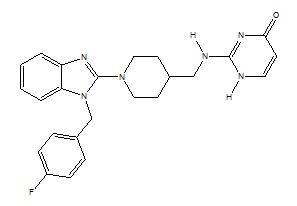 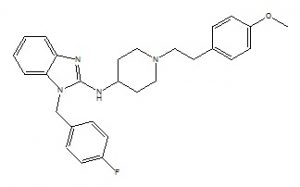 1.1.8. Benzimidazole Analogues as Cardio-vascular Agents: In the 1940s, a group of researchers including Porai-Koshits, Ginzburg, and Efros synthesized 2-benzylbenzimidazole 37 (dibazole) Fig. 16, which was capable of decreasing the tone of smooth muscles of the blood vessels and internal organs. This compound is widely used as a spasmolytic and hypotensive remedy 38. Further pronounced antihypertensive activity is characteristic of most of benzimidazole derivatives which are capable of blocking calcium channels 39-43.

Another benzimidazole analog, pimobendan 44 Fig. 17 is a phosphodiesterase inhibitor with calcium sensitizing properties.

E. B. Skibo et al., 47 have reported structure-activity studies of antitumor agents based on pyrrolo[1,2-a]benzimidazoles.

A. Da Settimo et al., 48 have reported synthesis and antitumor activity of pyridopyrimidobenzimidazole.