Institute of Molecular Biology and Biotechnology, The University of Lahore 1, Lahore, Pakistan

ABSTRACT: Lovastatin is a naturally occurring drug of statin family used for lowering cholesterol. It is found that it can be useful for treatment or management of multiple diseases and has immense medicinal significance. On one side, this drug is used to induce apoptosis in various cancer cells, while other reports indicate that it also promotes cell survival to alleviate certain disease conditions. Antiviral role of lovastatin has also been reported. So, lovastatin, if recommended for any therapy, first requires thorough study as well as experimentations both in-vitro and in-vivo. Current review is systematic, based on search from PubMed by entering key words “Lovastatin cancer, Lovastatin apoptosis and Lovastatin survival” with filter for seven years (2008-2014) data only. It is concluded from the study that Lovastatin has multidirectional role and may be helpful in cancer cells apoptosis as well as survival of certain types of cells. It may be used as anti-viral agent also.

INTRODUCTION: Lovastatin is an anti-hypercholesteremic agent 1 which along with its family members; simvastatin, atorvastatin, pravastatin, rosuvastatin, rosiglitazone, and pioglitazone has been reported as representatives of a therapeutic regimen 2. Lovastatin has been reported to show multidirectional roles in various diseases like cancer, osteoporosis, memory, fatigue, coronary heart disease, diabetes and non-alcoholic fatty liver disease 3. Lovastatin ameliorates blood-retinal barrier breakdown by inhibition of reactive oxygen species by down regulating vascular endothelial growth factor expression 4.

Lovastatin demonstrates promising anticancer characteristics through suppression of genes involved in cell division, up-regulation of cell cycle inhibitors, down regulation of cyclins B and D1, aurora kinases A and B, activation of caspase-3 and inhibition of anti-apoptotic factors like Bax, poly-ADP-Ribose Polymerase, Mcl-1 protein 1. Lovastatin helps to block the process of metastasis phenomena and that’s why co-administered with radiation therapy 5.

Statins also act as cytoprotective agents and used in multiple diseases including certain cardiovascular diseases 3, plague 6, dengue 7 and HIV-AIDS 8. Lovastatin has also been reported to protect stem cells against apoptosis 9.

Current study involves collection of variable data reported for multiple actions of lovastatin for various diseases and it was noticed that much of the data reported about lovastatin is as anticancer drug while its role as cyto-protective agent has been less described.

Role of Lovastatin in Inhibition of Cancer:

Statins, because of genetic and behavioral differences of cells have ability to inhibit growth of not only the cancer cells but also that of abnormal hESCs and promote growth of normal hESCs in-vitro 10. It was observed that statins are safer for use and are not associated with cancer induction 11.

Lovastatin up regulates miR-33B expression which in turn impairs expression of c-myc thus may be a promising therapeutic option against cancers with c-Myc over expression 12.

Lovastatin can be used for treatment of malignant mesothelioma as it plays role in prevention of tumor proliferation and angiogenesis by inhibiting VEGFR-2 activation and also VEGF dependent activation of Akt. Lovastatin in combination with VEGF-R2 inhibitor show more robust action against tumor growth 13.

Lovastatin show duality effect against tumors i.e. at low dose it is found to promote tumor growth whereas at high dose it inhibits tumor progression in a nude mouse cancer model, demanding further studies to rule out this effect 14. Cancer cells when grown in the presence of lovastatin, they adapt some sort of resistance to lovastatin and exhibit tumor formation ability. However, tumor growth is little bit slower as compared to lovastatin sensitive cells 15.

Statins inhibit cell growth and induces cellular apoptosis through a decrease in proliferating cell nuclear antigen (PCNA) and activation of extracellular signal-regulated kinase (ERK), cyclin D1 expression, and increased cleavage of poly(ADP-ribose) polymerase and this way have important role in esophageal squamous cell carcinoma (ESCC) therapy 16. Lovastatin inhibits ligand mediated dimerization of EGFR and its downstream PI3K/Akt pathway signaling contributing to cytotoxicity of this drug in various types of tumor cells including squamous cell carcinoma cells making it a novel therapeutic agent for tumors 17. In vitro as well as in nude mouse xenografts, lovastatin has been found to play important role in esophageal cancer cell growth inhibition alone or in combination with curcumin, EGCG by reducing phosphorylated Erk1/2,c-Jun, and cyclooxygenase-2 (COX-2 levels), and activating caspase-3 18. Lovastatin exhibits cytotoxic effects in squamous cell carcinoma cells also by activating LKB1/AMPK pathway and various other metabolic stress pathways 19. Arecoline, the major component of areca nut has been found to be involved in pathogenesis of oral cancer via stimulation of Cyr61 protein synthesis and lovastatin may serve as a therapeutic agent for oral cancer as it inhibits the synthesis of Cyr61 protein completely 20.

Lovastatin in association with myo-inositol plays an important role in the treatment of insulin resistance associated with polycystic ovary syndrome (PCOS) via its involvement in cholesterol synthesis 21.

Lovastatin has been found to play an important role in mouse model of neurofibromatosis (NF) via regulation of brain developmental processes and brain activity 24.

Lovastatin treatment reduces risk of colorectal cancer development and no significant difference was observed when used for long duration 25. Lovastatin when used in combination with a COX-2 inhibitor i.e. celecoxib inhibits caveolin-1 and its downstream signaling, contributing to cell survival and this way provide prevention for colorectal cancers 26.

Lovastatin down regulates PSA levels by reducing expression of androgen receptor and its activation and thus play important role in inhibition of prostate cancer growth in regular users of lovastatin 28. Statins are of clinical importance for treatment of prostate cancer and clinical trials of statins for prevention of this cancer are being warranted 29. Lovastatin inhibits de novo cholesterol synthesis critical for tumor growth and this way use of this drug has been associated with reduced risk of prostate cancer 30.

By inhibiting Akt and activating AMPK signaling, Lovastatin increases sensitivity of lung cancer cells to radiotherapy by inducing apoptosis and also impairs survival of cells 31. Lovastatin along with valproic acid acts additively to inhibit growth of malignant pleural mesothelioma mainly by reducing invasion of cells without induction of any effect on cell viability and apoptosis 32.

Lovastatin has been found to play important role in prevention of liver carcinogenesis in a mouse model and this inhibition is basically due to lovastatin mediated down regulation of ubiquinone synthesis 34.

Lovastatin and simvastatin which are lipophilic statins activate extrinsic as well as intrinsic apoptotic pathways and induce cell death in various gynaecological malignancies in dose and time dependent manner, and further investigations are required for their use as anticancer agents 35. Lovastatin induces apoptosis in ovarian cancer cells via mevalonate dependent mechanism and has implication as a potential antitumor drug. It has also been found that antitumor effects of lovastatin synergize in combination with doxorubicin, however this synergy is via mevalonate independent pathway antagonizing drug resistance via inhibiton of P-glycoprotein 36. Lovastatin and atorvastatin are found to induce expression of Cdc42 and Rac1 and activation of JNK pathway leading to enhanced apoptosis of ovarian cancer cells paving the way to development of novel therapy for this cancer 37.

Both simvastatin and lovastatin inhibit invasion of breast cancer cells significantly by interfering with membrane localization of H-Ras and its downstream signaling molecules i.e. matrix metalloproteinases and thus inhibit H-Ras induced invasion in MCF10A cells, providing evidence for further studies on these agents for breast cancer therapy 38. Statins (simvastatin, lovastatin, mevastatin, pravastatin) and gamma tocotrienol in combination rather than alone have been found to show significant therapeutic benefits for breast cancer treatment via up-reguation of p27 expression and decrease of cyclin D1, CDK2, and hypophosphorylation of Rb protein which ultimately lead to cell cycle arrest at G1 in mammary tumor cells contributing to their proliferation arrest 39. Lovastatin affects various proteins expression including that of GTPase family proteins, E2F1-pathway and its downstream target proteins i.e. MCM7 and MSH2 and also inactivate Akt signaling pathway.

Statins are extensively used in patients with hyperlipidemic cardiovascular disease and reduce morbidity as well as mortality. Statins affect lipid rejection and vasculature. Statins are helpful in alleviation of atherosclerotic vascular disease because of its anti-inflammatory activity and prevention of thrombosis. These compounds alter the vascular functions by modification of apoptosis of vascular endothelial cells 46.

Lovastatin is a fungal metabolite which performs its function via lowering cholesterol levels 47 and in this way plays important role in the management of dyslipidemia versus other clinical conditions like cancer, osteoporosis, memory, fatigue, coronary heart disease, diabetes, and non-alcoholic fatty liver disease, however, further investigations are still required before using it as a treatment 3. Lovastatin therapy has a significant effect on common carotid artery intima-media thickness (CCA-IMT) decrease 48.

Clinical observations indicated that lovastatin could prevent infections and reduce mortality during severe sepsis hence can reduce the rate of morbidity and mortality in animal models of Plague 6.

A significant increase in the survival rate was observed when lovastatin was provided in mice affected with dengue virus serotype 2 7.

A low dose of lovastatin has been reported to reduce the cytotoxic, anti-proliferative and apoptotic effects of the anticancer drugs on primary human endothelial cells. The effect is considered to be due to a reduced susceptibility of topoisomerases II to its inhibitors and protection from DNA strand break. Stress responses which are triggered by DNA damage like activation of p53 areattenuated by lovastatin eventually leading to increased cell viability 49, 50.When lovastatin was provided in rats before ischemia/reperfusion, it protected the mitochondrial and renal function 51.

One of the important roles of lovastatin was reported in a study of bone marrow transplantation in which morbidity and mortality associated with graft-versus-host disease (GVHD) was reduced after lovastatin treatment. The treatment not only prevented homing of T lymphocytes to lymph nodes and Peyer's patches but also compromised donor-derived T cell proliferation in vivo 52.

Interestingly, statins have been suggested to attenuate the stress conditions in cancer treatment caused by certain anti-cancer therapies. They improve the cell viability by enhancing resistance against the inhibitors of topoisomerases which are responsible for DNA damage hence cell death in the cancer treatment 49.

7.1 Effect of Lovastatin on Stem Cells:

Lovastatin has been found to have a significant anti-apoptotic effect on MSCs exposed to hypoxia and serum deprivation conditions by activation of the mitochondrial pathway and preventing release of cytochrome-c and activation of caspase-3/CPP32 9. It was reported that lovastatin has protective effect on bone marrow derived neural stem cells against oxidative stress hence, can be used for the treatment of oxidative stress-mediated neurological diseases 53. Lovastatin was also reported to improve survival, proliferation and differentiation status of human Wharton’s jelly mesenchymal stem cells’ derived chondrocytes under oxidative stress conditions 54. 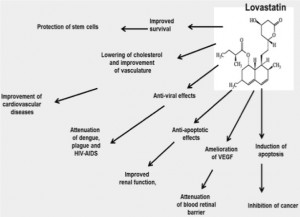 CONCLUSION: It may be concluded from the data that Lovastatin has multiple roles in different medical conditions. It has multiple positive effects on different disease conditions while on the otherhand, certain drawbacks are also reported so care must be taken before deciding it for medication.

Authors declare no conflict of interest.

NW and SSA developed the study plan and finalized the write up, FA, MZ, MMA; NH and AA performed the literature search. All authors approved the final draft.

The authors acknowledge The University of Lahore for facilitating the search.

Institute of Molecular Biology and Biotechnology, The University of Lahore , Lahore, Pakistan