The mainly deliberate endocrine product of the pineal gland, melatonin, has been reported to be involved in the feedback between neuroendocrine and immune functions and to exert oncostatic action, at least in certain experimental conditions. Melatonin seems to be a vital part of the immune system, by exerting direct and/or indirect stimulatory effects on both cellular and humoral immunity. Likewise, an antitumor activity of melatonin has been shown in several experimental models in vivo and in vitro. The means by which melatonin exerts its effects on immunity and neoplastic growth have not been elucidated. The different putative mechanisms of action of melatonin investigated so far are at this juncture briefly discussed.

INTRODUCTION: Melatonin also known chemically as N-acetyl-5-methoxytryptamine 1 is a naturally occurring hormone found in most animals, including humans, and some other living organisms, including algae 2.  Circulating levels vary in a daily cycle, and melatonin is important in the regulation of the several biological functions 3. Many biological effects of melatonin are produced through cultivation of melatonin receptors 4, while others are due to its role as a pervasive and powerful antioxidant with a particular role in the protection of nuclear and mitochondrial DNA 5.

On the other hand, melatonin inhibits the pro-oxidative enzyme nitric oxide synthase. Since considerable experimental evidence supports the idea that oxidative stress is a significant component of specific brain diseases, the ability of melatonin to protect against neurodegeneration was tested in a multitude of models. The first positive results were obtained with pharmacological doses of melatonin. At the present time, there is experimental evidence indicating that the quantity of melatonin endogenously produced is pertinent as a physiological antioxidant 7.

Further, the antioxidant defense system displays a daily rhythm which is abolished by pinealectomy in the rat, or by light in humans. Few statistics on the protective melatonin effect against free radicals are available in humans. Controlled trials are difficult to set up because the life of patients involved in such studies is at stake. In chronic hemodialysis patients, the oxidative stress induced by iron and erythropoietin given for treatment of anemia was vetoed by oral administration of melatonin (0.3mg/kg). Preliminary results in septic newborns showed that high melatonin doses (20mg per subject) significantly abridged serum levels of lipid peroxidation products and inflammation markers and amplified the survival rate and enhanced the clinical outcome of patients 8. Similarly, amplified blood levels of malondialdehyde and nitrite/nitrate observed in asphyxiated newborns were reduced by melatonin treatment (a total dose of 80mg per infant). Three of the 10 asphyxiated newborns not given melatonin died within 72 hrs after birth, whereas none of the 10 who received melatonin died 9. Despite ethical difficulties, these results of major interest should be replicated in a larger number of patients.

Immunity: Currently accumulated proof shows that the pineal is able to play an imperative role in modulating the immune response 10. Since functional (constant light condition) and pharmacological reticence (propranolol administration) of melatonin synthesis in mice is associated with suppressed humoral and cellular immunological responses. Melatonin can relate with specific membrane binding sites in cells from lymphoid organs. The kilo dalton value of these binding sites is in the 0.1- 1nM range, similar to the circulating levels.

In addition, interactions between the pineal gland and the immune system are bidirectional since interleukins and cytokines (interferon gamma) affect melatonin synthesis and release 11. Also, there has been described melatonin scavenging of Nitric oxide or free radicals in lymphoid cells, which could explain the melatonin, modulated circadian variation in the experimental chronic inflammation. This kind of approach raises new questions regarding the mechanism of chronic inflammation, in disorders like rheumatoid arthritis and nocturnal asthma, diseases that present rhythmic symptoms during a 24 h period 12, 13.  It is clear that melatonin provides a functional link between the neuroendocrine and immune-haematopoietic systems figure 1. 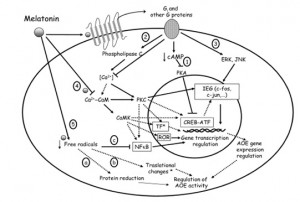 Current and Potential Medical Indications: Melatonin has been studied for the treatment of cancer, immune disorders, cardiovascular diseases, depression, seasonal affective disorder (SAD), circadian rhythm sleep disorders and sexual dysfunction. Studies by Alfred J. Lewy at Oregon Health & Science University and other researchers have found that it may ameliorate circadian misalignment and SAD 15. Basic research indicates that melatonin may play a significant role in modulating the effects of drugs of abuse such as cocaine 16.

Treatment of circadian rhythm disorders: Exogenous melatonin, used as a chronobiotic and usually taken orally in the afternoon and/or evening, is, together with light therapy upon awakening, the standard treatment for delayed sleep phase syndrome and non-24-hr sleep-wake syndrome. See Phase response curve, PRC. It appears to have some use against other circadian rhythm sleep disorders, such as jet lag and the problems of people who work rotating or night shifts.

Preventing ischemic damage: Melatonin has been shown to reduce tissue damage in rats due to ischemia in both the brain 17 and the heart 18; however, this has not been tested in humans.

Learning, memory and Alzheimer's: Melatonin receptors appear to be important in mechanisms of learning and memory in mice 19, and melatonin can alter electrophysiological processes associated with memory, such as long-term potentiation (LTP). The first published evidence that melatonin may be useful in Alzheimer's disease was the demonstration that this neurohormone prevents neuronal death caused by exposure to the amyloid beta protein; a neurotoxic substance that accumulates in the brains of patients with the disorder 20. Melatonin also inhibits the aggregation of the amyloid beta protein into neurotoxic microaggregates which seem to underlie the neurotoxicity of this protein, causing death of neurons and formation of neurofibrillary tangles, the other neuropathological landmark of Alzheimer's disease 21.

Melatonin has been shown to prevent the hyperphosphorylation of the tau protein in rats. Hyperphosphorylation of tau protein can also result in the formation of neurofibrillary tangles. Studies in rats suggest that melatonin may be effective for treating Alzheimer's disease. These same neurofibrillary tangles can be found in the hypothalamus in patients with Alzheimer's, adversely affecting their bodies' production of melatonin. Those Alzheimer's patients with this specific affliction often show heightened afternoon agitation, called sundowning, which has been shown in many studies to be effectively treated with melatonin supplements in the evening 22.

Attention deficit hyperactivity disorder (ADHD): Research shows that after melatonin is administered to ADHD patients, the time needed to fall asleep is significantly reduced. Furthermore, the effects of the melatonin after three months showed no change from its effects after one week of use 23.

Fertility: Recent research has concluded that melatonin supplementation in premenopausal women produces a highly significant improvement in thyroid function and gonadotropin levels, as well as restoring fertility and menstruation and preventing the depression associated with the menopause 24.  However, at the same time, some resources warn women trying to conceive not to take a melatonin supplement 25.

Headaches: Several clinical studies indicate that supplementation with melatonin is an effective preventive treatment for migraines and cluster headaches 26, 27.

Mental disorders: Melatonin has been shown to be effective in treating one form of depression, seasonal affective disorder 1, and is being considered for bipolar and other disorders where circadian disturbances are involved 28.

Cancer: Melatonin levels at night are reduced to 50% by exposure to a low-level incandescent bulb for only 39 minutes, and it has been shown that women with the brightest bedrooms have an increased risk for breast cancer 29. Reduced melatonin production has been proposed as a likely factor in the significantly higher cancer rates in night workers 30.

Other treatment: Some studies have shown that melatonin has potential for use in the treatment of various forms of cancer, HIV, and other viral diseases; however, further testing is necessary to confirm this 31. Melatonin is involved in the regulation of body weight, and may be helpful in treating obesity (especially when combined with calcium) 32.

Histologically speaking, it is also believed that melatonin has some effects for sexual growth in higher organisms (quoted from Ross Histology and Weather’s Functional Histology).

CONCLUSION: Although melatonin was discovered more than 40 years ago, the data on the physiological role of this hormone in humans are scarce. Continuous progress in our knowledge reinforces, however, the idea that melatonin could play the role of a universal endogenous synchronizer, even for physiological functions whose circadian organization does not appear of paramount importance at first sight. The influence of melatonin on hemostasis, glucose homeostasis, phosphocalcic metabolism and blood pressure regulation would deserve further investigation. Also, the improvement of melatonin antagonists could help to understand the real physiological consequence of melatonin in humans. Because of its complex regulation, melatonin secretion is disturbed in most pathophysiological situations. The evaluation of melatonin secretion should be comprehensive to situations where dramatic disturbances of endogenous rhythms, immune and antioxidative defences are patent, in patients admitted in intensive care units for instance. However, study conditions (light environment, drug intake) should be strictly controlled. We believe that great advances could be achieved by developing these clinical aspects in a collaborative way, generating multicentric trials on the efficacy and long term toxicity of melatonin.