ABSTRACT: The construction and electrochemical response characteristics of polyvinyl chloride (PVC) membrane sensors for determination of Tolterodine tartrate (TT) in presence of its oxidative degradation product are described. The sensors are based on the ion association complexes of TT cation with sodium tetraphenyl borate (TT-TPB) [sensor 1] or phosphomolybidic acid (TT-PMA) [sensor 2] counter anions as ion exchange sites in PVC matrix using dioctylphathalate (DOP) as plasticizer. The performance characteristics, sensitivity and selectivity of these electrodes in presence of TT oxidative degradation product were evaluated according to IUPAC recommendations. It reveals a fast, stable and linear response for TT over the concentration range 10-5-10-2 M with cationic slopes of 58.6 mV and 56.6 mV per concentration decade with sensors 1 and 2, respectively.  The sensors are used for determination of TT, in pure form, in presence of its degradation product and in tablets. Validation of the method shows suitability of the proposed sensors for use in the quality control assessment of TT and for routine analysis as stability indicating method. The developed method was found to be simple, accurate and precise when compared with a reference   method.

INTRODUCTION: Tolterodine tartrate (R)-N, N- diisopropyl-3-(2-hydroxy-5-methylphenyl) – 3 -phenylpropanamine L-hydrogen tartrate 1 Fig. 1. The empirical formula is C26H37NO7, and its molecular weight is 475.6, It is an antimuscarinic drug that is used to treat urinary incontinence 2. Literature survey shows that several spectrophotometric 3 - 9, potentiometric 10, spectrofluorimetric 11 and chromatographic 12-20 methods for determination of tolterodine in pure form, pharmaceutical preparations and biological fluids have been reported.

In this work it has been found that tolterodine tartrate can be determined in presence of its oxidative degradate by simple, rapid manipulation and low cost method moreover , it offer highly sensitive, selective and convenient technique for determination of TT in pure form and pharmaceutical preparation.

Tolterodine tartrate was kindly supplied by, Pharmacia, Egypt under License of Pfizer.

TT stock solution (10-2M) in water or phosphate buffer pH 5  was prepared by transferring 475mg of TT powder into two separate 100mL measuring flasks, either water in case of studying optimum parameters or phosphate buffer21 for calibration and determination with optimum pH were added, shaken and completed to volume with the same solvent.

Stock solution of degradation products(1.0x10-3) was prepared from complete degradation of 10mL of(1.0x10-2)standard solution of tolterodine tartrate in  30% hydrogen peroxide refluxed for 7 hours to achieve complete degradation  then the solvent was evaporated using rotator and the obtained residue was transferred quantitavely into 100mL measuring flask and completed to volume with phosphate buffer pH 5.

Preparation of the membrane sensors:

The ion-exchangers tolterodinetetraphenylborate, (TT-TPB) and tolterodine phosphomolybidate. (TT-PMA) were prepared by the addition of 150 mL of1.0x10-2M TT solution to 150 ml of 1.0x10-2 M of Tetraphenyl borate (TPB) and 50mL of phosphomolybidic acid (PMA).The resulting precipitates were left in contact with their mother liquor overnight to assure complete coagulation, filtered and washed with distilled water, and left to dry at room temperature for at least 48 hrs.

The electrodes were constructed by varying the percentages (w/w) of the ion associates, PVC and DOP until we reach a composition which has optimum performance characteristics. The membranes are prepared by dissolving the required amounts of PVC, ion-exchanger(s) and the plasticizer (DOP) in a 5.0 cm diameter Petri-dish containing 5.0 ml tetrahydrofuran (THF).

The Petri-dish was then covered with a filter paper and left to dry in air. To obtain uniform membrane thickness, the amount of THF was kept constant and its evaporation was controlled for 48 h.

Preparation of the electrode assembly:

A 12 mm diameter disc was cut out from the prepared membrane and glued to the polished end of a plastic cap attached to a glass tube. The electrode body was filled with a solution that is 10-2 M in KCl and 10-2M in TT and preconditioned by soaking in 10-2M (TT) solution.

Construction of the Calibration Curve:

A series of solutions with concentration range 1.0x10-5 - 1×10-2were measured. The sensor and the reference electrode were immersed in the solution and the e.m.f value was recordedat25±1°C, after each addition. The values were plotted versus negative logarithmic value of the drug concentration (p drug).

Effect of Interfering Ions: The influence of some cations, and sugars on the response of the electrodes towards their respective drug was investigated. In the separate solution method 22 was applied when determining the selectivity coefficient for inorganic cations by measuring the potential for 1.0x10-3M solution of both TT (E1) and the interfering ion (E2) separately, and the selectivity coefficient K Pot was calculated using the slope of the calibration graph of the test Electrode by applying the following equation

Where E1 and E2 are the electrode potentials of 1.0 x10-3M solution of each of the investigated drug and interferent cation [JZ+], respectively and S is the slope of the calibration graph. The high concentration of interfering ions (1.0 x10-3M) was used to ensure that there would be no interference if lower concentrations than this were present under the same experimental conditions.

For neutral molecules, such as glucose, urea and sucrose the selectivity coefficient Log K Pot

was calculated using the matched potential method [MPM] 23 This method does not depend on the Nicolsky-Eisenman equation at all, in this method; the selectivity coefficient is defined as the activity ratio of primary and interfering ions that give the same potential change under identical conditions. At first, a known activity (aA') of the primary ion solution is added into a reference

Ten tablets of detrusitol® tablets were weighed and powdered. An amount of the powdered tablets equivalent to 23.75 mg TT was accurately transferred into a 100 mL volumetric flask and the volume was completed to the mark with phosphate buffer (pH 5) to prepare a 5×10-4 M solution of TT.

The e.m.f. produced by immersing the prepared electrodes in conjunction with Ag/AgCl reference electrode in the prepared solution was determined then the concentration of TT was calculated from the regression equation of the corresponding electrode.

The e.m.f. produced when immersing the suggested electrode and the reference electrode in the lab prepared mixtures was measured and the concentration of TT was determined from the corresponding regression equation.

Composition of the Membranes 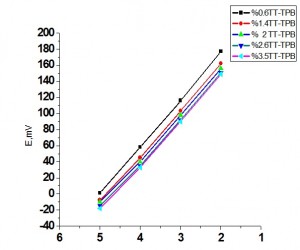 FIG.2: EFFECT OF ION PAIR PERCENTAGE ON THE RESPONSE OF SENSOR 1 (TT-TPB) 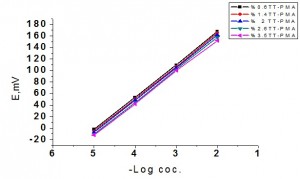 FIG. 3: EFFECT OF ION PAIR PERCENTAGE ON THE RESPONSE OF SENSOR 2 (TT-PMA)

TABLE 1: EFFECT OF PLASTICIZER TYPE ON THE SLOPES OF THE CALIBRATION GRAPH OF 0.6% TOL-TPB AND 1.4% TOL-PMA ELECTRODES

Freshly prepared electrodes must be soaked to activate the surface of the membrane to form an infinitesimal thin gel layer at which ion exchange occurs. This preconditioning process requires different times depending on diffusion and equilibration at the interface, fast establishment of equilibrium is certainly a sufficient condition for fast potential response. For the present electrodes, the pre-soak times were 0.5, 2,12,24and 72 hours with optimum slopes 58.6 and 56.6mV/ concentration decade and usable concentration ranges  from 1x10 -5- 1x10 -2  for TT-TPB and TT-PMA respectively after 0.5 hour. Nevertheless, continuous soaking of the electrodes in 10-2M tolterodinium affects negatively their response to the tolterodinium cation, this is attributed to leaching of the active ingredients (ion-exchangers and plasticizer) to the bathing solution, thus the slopes of the calibration graphs obtained by the preconditioned electrodes decrease gradually to about 45.0 and 40mV/decade after 6weeks 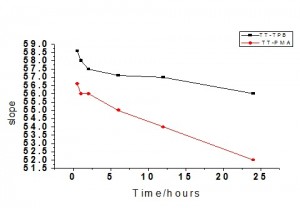 FIG.4: EFFECT OF SOAKING TIME ON THE RESPONSE OF SENSOR 1 (TT-TPB) AND SENSOR 2 (TT-PMA)

However, it was noted that in all cases electrodes which had been kept dry in a closed vessel and stored in are frigerator showed a good preservation of the slope values and response properties extending to several months. Thus, it is recommended that unused electrodes are kept dry in closed vessels in a refrigerator

Effect of Temperature of the Test Solution:

The variations of calibration graph potentials with temperature for the two electrodes were shown in Fig.5. For the determination of the isothermal coefficients (dEо/ dt) of the electrodes, the standard electrode potentials (E о) at different temperatures were obtained from the calibration graphs as the intercepts at pTT=0 and plotted versus (t-25), where t is the temperature of the test solution in оC. A straight line plot is obtained using the following equation 24Eо = Eо (25) + (dEо/dt) (t-25)

The slopes of the straight lines obtained represent the isothermal coefficients of the Electrodes (0.00088and 0.00034 V/0C) for TT-TPB and TT-PMA respectively revealing a fairly high thermal stability of the electrodes within the temperature ranges investigated.

TABLE 2: PERFORMANCE CHARACTERISTICS OF THE TWO ELECTRODES AT DIFFERENT TEMPERATURES 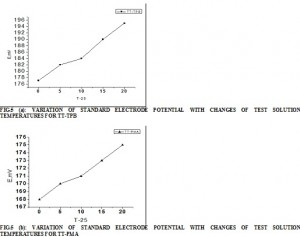 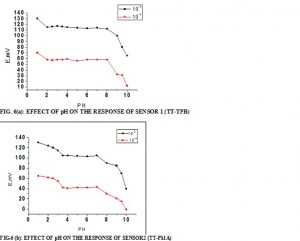 It is evident that the electrodes do not respond to pH changes in the range 2.0 -8.0and 3.5– 7.0 for TT-TPB and TT-PMA respectively. At pH values lower than 2.0 for TT-TPB and 3.0 for TT-PMA the potential readings increase slightly, this may be attributed to the penetration of the hydronium ions into the membrane surface.

At pH values higher than these ranges, the decrease in potential readings is most probably attributed either to the penetration of hydroxyl ions into the gel layer of the membrane or to the deprotonation of tolterodine in the solution leading to a Consequent decrease in its concentration. 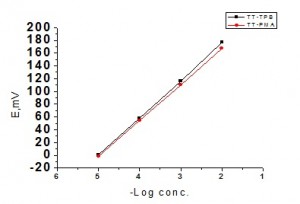 FIG.7: PROFILE OF THE POTENTIAL IN MV VERSUS –LOG MOLAR CONCENTRATION OF TOL. WITH TPB AND PMA

The influence of some inorganic cations, sugars and amino acids on the TT-electrodes was investigated. The selectivity coefficients have been determined by the separate solution method for inorganic cations and matched potential method for sugars and amino acids the selectivity coefficients obtained show that the proposed electrode is highly selective towards TT ion. The inorganic cations did not interfere due to the differences in their ionic size, mobility and permeability, compared to TT ion. In case of glucose, urea and glycine the selectivity is mainly attributed to the difference in polarity and to the moderately hydrophobic nature of their molecules relative to TT ion.

TABLE 4: DETERMINATION OF TOLTERODINE IN PRESENCE OF ITS OXIDATIVE DEGRADATION PRODUCT

Table 4 show that the results obtained from analysis of laboratory mixtures containing tolterodine and its oxidative degradation .it's obvious from results that the proposed sensors(TT-TPB and TT-PMA) can be successfully used for the determination of tolterodine in presence of its degradate

TABLE 5: DETERMINATION OF TOLTERODINE IN PURE SOLUTIONS AND PHARMACEUTICAL PREPARATIONS

TABLE 6: STATISTICAL COMPARISON FOR THE RESULTS OBTAINED BY THE PROPOSED ELECTRODES AND OFFICIAL METHOD FOR ANALYSIS OF TOLTERODINE IN PURE FORM 25

* The values in parenthesis are the corresponding tabulated t and F values at P= 0.05

*Limit of detection measured by interception of extrapolated arms of Fig. 7

CONCLUSION: TT-TPB and TT-PMA electrodes are sufficiently simple and selective for the quantitative determination of TT at a wide concentration range (1x10-5 - 1x10-2 M) in pure and pharmaceutical formulation. The method is a stability indicating one as the degradate is not interfering in the determination of the drug. The use of the proposed sensors offers the advantages of fast response, elimination of drug pretreatment or separation steps, low detection limit and direct determination of drug in turbid and colored solutions. They can therefore be used for routine analysis of the drug in quality control laboratories. It is clear from the above results that the best Nernstian response was obtained on using DOP as a plasticizer compared to the slopes obtained with TBP which is due to low solubility or low distribution of ion exchange in this plasticizer and the difference in the physical properties of each. The slopes for both electrodes increase with temperature increase while the concentration ranges are stable in all studied temperatures.