ABSTRACT: The objective of the study is to elucidate the association between thyroid dysfunction and increased risk of developing gestational diabetes mellitus (GDM) and assess the other risk factors for developing GDM. Retrospective observational research was carried out on 204 patients. Of these, pregnant women greater than 18 years were considered and recruited based on inclusion and exclusion criteria. All data and clinical observations were collected, and the prevalence of GDM rose with increasing age, BMI, family history of diabetes, history of GDM, and history of thyroid achieves statistical significance. The incidence of GDM is significantly increased in overt hypothyroid groups compared with other groups. In a group of GDM patients, the mean values of the oral glucose tolerance test (OGTT) were significantly higher in overt hypothyroid patients compared with Euthyroid patients. Interestingly, overt hypothyroid patients with GDM had significantly high mean serum TSH values in their early pregnancy compared to overt hypothyroid patients without GDM, indicating the association between thyroid dysfunction in pregnancy and gestational diabetes mellitus. Patients with a history of polycystic ovarian disease (PCOD) and a history of infertility had a significantly higher incidence of GDM. With the effective statistical assessment, the present study concludes that thyroid dysfunction, especially overt hypothyroidism, is associated with an increased risk of developing gestational diabetes mellitus. History of PCOD and history of infertility are the notable risk factors for developing GDM.

INTRODUCTION: Gestational diabetes mellitus (GDM) is a serious pregnancy complication in which pregnant women who have never had diabetes develop persistent hyperglycemia due to pancreatic-cell dysfunction 1.

Obesity and overweight, advanced maternal age, and a family history of diabetes or any kind of diabetes are all independent predictors of GDM. Globally, GDM affects around 16.5 percent of pregnancies, which is anticipated to climb as the obesity pandemic intensifies.

There is also evidence that the prevalence of GDM varies by season, with higher diagnoses in the summer than in the winter 2. Prevalence of gestational diabetes has been found to range from 3.8 percent in Kashmir to 6.2 percent in Mysore, 9.5 percent in Western India, and 17.9 percent in Tamil Nadu 3.4. GDM affects roughly 4 million women in India at any given moment 5.

Pregnancy tends to influence normal thyroid function in general, according to evidence from human and animal studies and vice versa. The T3 and T4 hormones are required for a healthy pregnancy and foetal development. The increased foetal intake of maternal thyroid hormone, as well as rapidly increasing thyroxine-binding globulin (TBG) concentrations and urinary iodide clearance, contribute to increased thyroid hormone breakdown by placental type 3 deiodinase 6, 7. Because of these pregnancy-specific alterations and the high need for T3 & T4 hormone, preceding minor thyroid malfunction may be misinterpreted as gestational thyroid dysfunction. Thyroid clinical symptoms are the most common endocrine issue in pregnancy. Overt hypothyroidism is estimated to occur in 0.3–0.5% of pregnancies. Subclinical hypothyroidism is thought to afflict 2–3% of pregnancies, while hyperthyroidism affects 0.1–0.4 percent 8. The aging process impacts both the prevalence and clinical symptoms of hypo- and hyperthyroidism. Subclinical thyroid function issues are more common in the general population and the elderly than overt disorders 9.

According to empirical results, there is a substantial but hardly conclusive correlation between thyroid and the risk of GDM. Untreated thyroid dysfunction can worsen diabetic patients' metabolic regulation, and this link can have serious consequences for the prognosis of both of these conditions 10. Studies state that the frequency of thyroid anomalies in the diabetic population is 13.4%, with women with type 1 diabetes having the highest prevalence (31%) and men with type 2 diabetes having the lowest percentage (6.9 percent) 11. Insulin and oral pharmaceuticals have been utilized to treat hyperglycaemia in GDM patients. Insulin has the best safety profile during pregnancy. Sulfonylureas have been explored as oral medications. In the United States, the American Diabetes Association (ADA) and the American College of Gastroenterology (ACOG) both suggest insulin as the first-line treatment for hyperglycaemia in individuals with GDM 12. Likely, levothyroxine is recommended as the preferred therapy for hypothyroidism. Thyroid hormone tablets are the primary treatment for hypothyroidism. It's critical to get the amount right because consuming too much thyroid hormone might create hyperthyroidism symptoms 13.

It is recommended to identify women with thyroid dysfunction as soon as humanly possible so that gestational diabetes mellitus can be detected and treated. On the other hand, the observational research encompassing a wide range of patients is expected to give a greater understanding of the association between thyroid dysfunction and an increased risk of developing gestational diabetes.

MATERIALS AND METHODS: The Institutional Human Ethical Committee (IHEC) authorized the retrospective observational study, PSGIMSR. Project No: 16/438 and conducted on Pregnant women with age> 18 yrs. patients admitted to the Department of Endocrinology, Obstetrics & Gynecology at the PSG Hospital Patient’s data were gathered between November 2016 and July 2017. Based on inclusion and exclusion criteria, 204 patients were identified as pregnant from clinical records and randomly enrolled for the research. The participants were over the age of 18 years old. The Subjects were excluded if the patients with Diabetes mellitus (Type -1 or Type -2) were diagnosed before pregnancy, pregnancy with more than one foetus, chronic medical conditions such as HIV/AIDS, kidney disease, SLE, and Autoimmune diseases. Thyroid patients were classed as euthyroid, subclinical hypothyroid, or overt hypothyroid. In Group 1: patients with Euthyroid (47), Group 2: patients with subclinical hypothyroid, Group 3: patients with overt hypothyroid and Serum Thyrotropin levels (TSH, FT4) during their first trimester (9 -13 weeks), physical examination findings between (24-28weeks) are subjected to oral glucose tolerance test were observed. Patient data were collected for 8 months.

TSH cut-off values were 0.1-2.5mU/L for euthyroid, greater than 2.5mU/L for subclinical hypothyroid, and greater than 10mU/L for overt hypothyroid. TSH levels in the first trimester should be between 0.1 and 2.5mU/L, in the second trimester between 0.2 and 3.0mU/L, and the third trimester between 0.3 and 3.0mU/L. Diabetes in pregnancy study group India (DIPSI) diagnostic criteria, diagnosed based on the 2-hour 75gm oral glucose tolerance test (OGTT) with a threshold plasma glucose concentration greater than 140 mg/ dl at 2 hours, performed in fasting /non–fasting state irrespective of the last meal timing for women are obtained from respective associations.

Statistical Analysis: Documented Data were analyzed using the Statistical package for social sciences (IBM SPSS, version 19). The incidence of GDM with the demographic factors and clinical characteristics was assessed by ANOVA and student’s t-test. Group-wise correlation between the clinical characteristics and GDM was assessed by Pearson’s x2 test. GDM risk analysis between the groups was assessed by odds ratio (OR), and exact 95% confidence intervals (CI). P values <0.5 were considered statistically significant. The results were presented in the form of the Mean Standard Deviation.

Demographic Data of the Study Population: The demographic and clinical features of the patients who participated in this study are summarized in Table 2. In the overall sample, there was a prevalence of women having a family history of Diabetes, GDM, PCOD, Thyroid, or infertility. The average age in all groups ranged from about 25 to 35 years. In all groups, body weight rose Table 1. 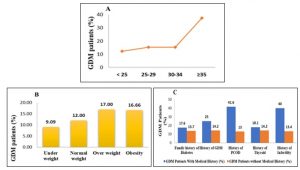 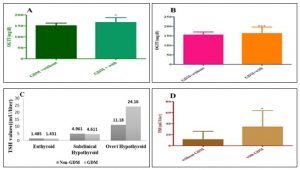 TABLE 2: COMPARISON OF THE CLINICAL CHARACTERISTICS ACROSS THE STUDY POPULATION 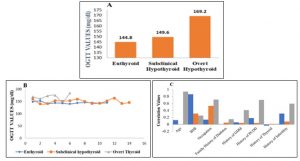 Similar findings were reflected in the present study, where, the incidence of GDM was found to be increased in subclinical hypothyroid and overt hypothyroid groups when compared with the Euthyroid group (17.94% vs. 11%), (19.23 vs. 11%). Interestingly, overt hypothyroid patients with GDM had higher levels of mean serum TSH in their early pregnancy compared with non-GDM patients within the same group (24.6vs. 11.18mU/liter). The following is the hypothesized explanation for the above findings: thyroid hormones have a key role in glucose metabolism. The physiologically active hormone triiodothyronine (T3) is principally responsible for glucose metabolic activity 15. Between 15% and 80% of circulating T3 is transformed peripherally via deiodinase activity and T4 monodeiodination16. According to studies, several pathways are involved in the thyroid hormone-mediated modulation of glucose metabolism. This can be described as follows: a) Reduce insulin half-life, accelerate insulin degradation, and increase the release of inactive insulin precursors; b) Increase hepatic glucose output by increasing the expression of glucose transporter 2 (GLUT2) in liver cell membranes; and c) Activate -adrenergic receptors via CAMP, increasing the sensitivity of catecholamines, powerful hormones that accelerate glycogenolysis 17.

Many routes linking the hypothalamic-pituitary axis and the T3 receptor in thyroid cells have also been aberrant in diabetics 18. Pregnancies complicated with thyroid disorders, especially hypothyroidism, increase the chance of impaired glucose tolerance 14. Similar results were obtained in the present study, where oral glucose tolerant test (OGTT) mean values of GDM patients were significantly high in overt hypothyroid patients (169.2mg/dl) when compared with Euthyroid patients (144.8mg/dl). The proposed reason for the above findings is that patients with either hypothyroidism or subclinical hypothyroidism can exhibit insulin resistance. In-vivo and in-vitro studies have shown that this resistance may be caused by a reduced need for insulin or glucose utilization in peripheral tissues damaged by insulin 19. In the present study, 39.75% of the study population were in the age group <25yrs, out of which 12.34% had developed GDM. 38.2% of the study population were between 25 to 29, out of which 15.38% had developed GDM. 18.1% of the study population were between the age group 30 to 34, of which 16.21% developed GDM.3.92% were of the age ≥35, out of which 37.5% developed GDM. We found that the incidence of GDM increased with maternal age; our findings were in agreement with the previous studies who, 20 reported that the incidence of GDM increases with maternal age reaching a plateau at around 40 years. The above findings could be explained by the: i) association between aging and progressive vascular endothelial damage, ii) decreased insulin sensitivity with age and in individuals with impaired glucose tolerance 21, iii) pancreatic ß cell function falls with age 22.

GDM was higher in patients with a history of infertility than those without a history of infertility (40.6% vs. 13.4%, p = 0.003). The observed results are consistent with the earlier reports suggesting that infertility is associated with an increased risk of developing gestational diabetes mellitus 27. According to Holst et al., 28 the processes that may explain an increased risk of GDM after reproductive issues are most likely connected to the underlying cause of infertility, the techniques used to cure infertility, or both 29. Concerning the underlying reproductive issues, it has been proposed that the link with the risk of GDM is mostly due to PCOD. PCOD has been shown to increase the risk of GDM, possibly owing to a high prevalence of insulin resistance in these women 30.

Regarding reproductive treatment processes, researchers have hypothesized that the hormonal milieu produced by Androgen replacement therapy (ART) or ovulation stimulation may explain or contribute to the development of GDM 31.

For instance, the hormone progesterone, commonly used in fertility treatment (for luteal-phase support) has been suggested to have a diabetogenic effect in pregnancy, possibly by increasing insulin resistance in skeletal muscle and adipose tissue. Thus, it is biologically plausible that factors related to both the underlying fertility problem and fertility treatment increase the risk of GDM. Stohl et al., reported that women with hypothyroidism had more incidence of GDM when compared to women with hyperthyroidism 32. These findings are in contrast to the study by (Sahu et al.,) 33 who demonstrated an association between hyperthyroidism and the development of GDM. In the present study, we could not enroll patients with hyperthyroidism as its prevalence is very less.

CONCLUSION: The present study can be concluded that, thyroid dysfunction especially overt hypothyroidism is associated with increased risk of developing gestational diabetes mellitus. History of PCOD and history of infertility are the notable risk factors for developing GDM.

It is prudent to identify women with thyroid dysfunction at the earliest in order to detect gestational diabetes mellitus with least delay and treat with vigilance. However, a long term study covering a wide spectrum of patients is likely to provide a better knowledge in understanding the relationship between thyroid dysfunction and increased risk of developing gestational diabetes.