ABSTRACT: Empirically dry fallen of Artocarpus altilis leaves are widely used as a traditional medicine, but the green leaves that have been widely studied. Therefore, this research was conducted to compare the metabolite profile of green leaf, attached yellow, fallen yellow, fallen dry, and fermented green leaves. Comparison of flavonoid content was conduted by HPLC. Extraction was performed using Soxhlet apparature, fractionation by VLC and setrifugal chromatography. HPLC analysis of various leaves showed that the fallen dry leaves contained the highest flavonoid compound. Three compounds were isolated, compound 1 characterized Uv-Vis, IR, 1H-NMR, 13C-NMR spectroscopies and identified as sitostenone. Compound 2 showed UV spectrum typical of flavonoid with M - 392 and tentatively identified as flavon with two prenyl substituents. Coumpound 3 was identified as b-caroten based on its UV spectrum and chromatographic data

INTRODUCTION: Breadfruit (Artocarpus altilis) is readily available and has been used empirically in certain communities in Indonesia as a food and traditional medicine. A. altilis leaves were traditionally used to cure malaria, dysentery, skin diseases antidiabetic, antioxidant, and antibacterial 1, 2. Dry and fallen dry leaves of breadfruit were empirically used as antidiabetic and antihypertensive. Extracts of the breadfruit leaves have also been demonstrated to have activity against tumor cells SW872 lyposarcoma 3. A. altilis fruit can be used as a food due to its carbohydrate, protein, calcium, Vitamin and sugar content 4.

Almost all parts of this plant have been used as a drug, such as leaves, male inflorescence, fruit and roots. The male inflorescence has activity as an insecticide for mosquito Aedes aegypti 5. The roots of A.altilis has been used as antidiabetic and anti-inflammation 6. Secondary metabolites have been isolated from the leaves of breadfruit among others are flavonoid compounds ranging from geranyl dihydrochalcone3. Geranyl flavonoids7 and prenylated flavonoids 2 and has antifungi activity 8. Many activities related to the content of the compounds in the genus Artocarpus. Therefore it was very interesting to study the profile of chemical content of leaves at various development stages.

Artocaropus altilis leaves were collected from Cipamokolan, Riung Bandung, Bandung, West Java Province. The materials used in this study were the green, attached yellow, fallen yellow, fallen dry and fermented green leaves. The taxonomic confirmation of the plant was performed at the Herbarium Bandungese, The School of Biological Sciences and Technology.The leaves were washed under running water to remove soil and dirt. The leaves were then dried at 45°C for 5 days to obtain dry crude drug. Ash content, water soluble material and ethanol soluble materal were determined in accordance to WHO guidelines 14. Extracts were analyzed by HPLC and TLC to select breadfruit leaves for further study.

Extraction was conducted consequtively using different polarity solvents. Fractionation of extract was performed by VLC with the stationary phase of silica gel 60 H and the mobile phase containing n- hexane-ethyl acetate with gradient elution. Selected fractions were further purified using centrifugal chromatography (Chromatotron) with the stationary phase of silica gel GF254 and the mobile phase n- hexane-ethyl acetate (9,5-0,5).  Selected subfraction was further purified using TLC preparative chromatography. Purity of the isolated compound was tested by 2D-TLC and identification was based on spectroscopic data.

The botanical specimen was taxonomically determined at the Herbarium Bandungense School of Biological Sciences and Technology, ITB and identified as Artocarpus altilis (Parkinson) Fosberg.

The leaves used in these experiments were as shown in Fig. 1. Green and yellow leaves were harvested directly from the plant, fallen yellow and dry fallen leaves were colected from the ground underneath the plant. Fermentation of green leaves was conducted by stacking leaves aproximately at 10 cm thickness for five day.

Total ash contents presented in Table 1 show that the percentage of ash content in yellow leaf and fallen yellow leaf were higher compared to the other leaves indicating the higher inorganic materials present in those leaves. The water extractable materials present in green leaves was much higher compared to the other leaves.  In green leaves, metabolism is still active and many temporary metabolites or intermediates are actively synthesized and many of them are accumulated in the vacuola. Intermediates for primary metabolites are also present abundantly in actively growing or metabolizing leaves.

In addition, many primary metabolites will also dissolve in water or hot water. It is surprising that the ethanol solube material present in fallen dry leaves was much higher compared to the other leaves. Ethanol will dissolve metabolites with wide range of polarity. This is interesting since the fallen dry leaves are currently considered as rubish.

Phytochemical screening results of breadfruit leaves presented in Table 2 show the presence of flavonoid, steroids/triterpenoids and phenolic compounds in all leaves. Alkaloid, saponin, quinone, tanins were absent in all leaves. These results suggest that the metabolite profile among the leaves evaluated were similar at least from the chemical group point of view.

HPLC analysis was conducted toward methanol extract of the leaves. Extraction was performed by macerating 50 grams of leaves with 150 ml MeOH for 72 hours. Extract was filtered through using nylon membran ᶲ 0, 45 µl and 20µl of filtrate was directly injected on a liquid chomatograph (HP1101). HPLC analysis was performed using C18ODS column, with gradient elution using MeOH, 5%HOAc, flow rate 1ml/minute and colomn temperature 250C, detection system using DAD at 280 and 350 nm.  One of the HPLC chromatograph of the extract and the UV spectra of the major peaks is as shown in Fig. 2. Based on the UV spectra, two major peaks (RT 7.797 and 13.190) were identified as flavonoids. 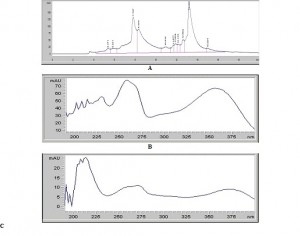 Peak area of both peaks in various leaf extract was measured and the results presented in Table 3. Consistent with the ethanol soluble material content, the fallen dry leaves also contained the highest flavonoid compared to the other leaves. The yield of the extract following maceration with methanol was also evaluated and the results were as shown in Table 4. The results also demonstrated that the fallen dry leaves yielded the largest amount of extract.

Note: the data was the average of three replicates

TABEL 4: THE YIELD OF METHANOL EXTRACT OF BREADFRUIT LEAVES

TLC profile of leaf methanol extracts on SiGel TLC plate with n-hexane ethyl acetate (7: 3) as the developing solvent can be seen in Fig. 3 below. 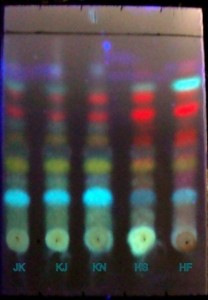 TLC chromatograms of methanol leaft extract gave more observable compounds. Fig. 3 showed that the metabolic profile of the methanol extract from various leaves were similar, but the quantity of individual compound  was different. The bright blue fluorescent spot with Rf 0.8 was highest in fermented green leaf. Similar pattern was observed with the red spot that might be degradation product of chlorophyll. The bright blue spot with Rf 0.3 increased with the age, but substantially decreased in fermented and fallen dry leaves.

Based on the above results, further study was conducted on fallen dry leaves. As much as 969.46 g crude drugs was extracted consequtively using a continuous extraction with n-hexane, ethyl acetate, methanol. The extracts obtained were concentrated under vaccuum rotary evaporator and subsequently monitored using TLC.

Fractionation of hexane extract was performed using vacuum liquid chromatography (VLC), using gradient elution with hexane, ethylacetate and methanol. Fraction number 5 and 6 were combined and further separated on centrifugal chromatography (Chromatotron) with stationary phase thickness 2 mm and using n-hexane-ethyl acetate (9.5: 0.5) as the mobile phase Following TLC monitoring fraction 9-21 were combined resulting 199.1mg of crude isolate. Further purification was conducted using Chromatotron with 1mm thickness of the stationary phase and an isocratic elution with n-hexane. As much as 51.6 mg of compound 1 was obtained and its purity was tested by two dimensional TLC. This compound was elucidated by UV, IR and NMR spectroscopy.

Bright fluorescens compound was isolated by preparative TLC to produce compound 2. However, this compound was only obtained at very small quantity and only identified by LC-MS. Compound 3 was obtained through purification of solid material collected from VLC fraction (fraction 1 to 3). UV spectrum of this compound is typical of carotenoid with maximum absorption wave length at 448 nm and 473 nm. Co TLC chromatography using hexane as solvent gave the same Rf value as that of authentic marker (Rf= 0.6).

Monitoring by TLC, compound (1) showed the black spots under UV 254 nm and did not provide fluoresce under 366 nm. It gave purplish color after sprayed with 10% H2SO4 in methanol and heated at 100 °C.

FIG. 4: THE INFRARED SPECTRUM COMPARED OF THE RAW SITOSTENONE.

Based on the UV-Vis spectra, IR, NMR (1H and 13C - NMR) obtained, compound 1 with molecular formula C29H49O and DBE 6. Structure of compound (1) was confirmed by two-dimensional NMR data (HSQC and HMBC) as shown in Fig.5. 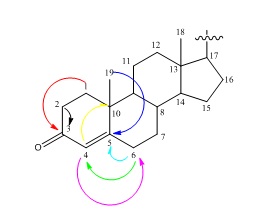 FIG.5: HSQC AND THE PATTERN OF HMBC CORELATIONS OF COMPOUND 1.

To ensure the structure of the compound(1), the chemical shift of the 13C-NMR spectrum were

compared with the data of sitostenon as that was reported  9,10 as shown in Table 6.

.TABLE 6:COMPARISON OF 13C-NMR SPECTRUM OF COMPOUND 1 AND SITOTENONE.

Based on the UV-Vis spectra, IR, 1D-NMR (1H and13C - NMR), 2D-NMR (HMBC and HSQC) and the results of the comparison in the table above in general did not show any significant difference, so it can be as concluded that compound 1 was identified as sitostenone with structure as shown in Fig. 6. 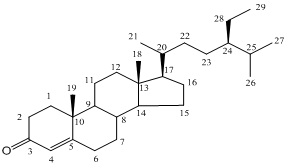 TLC profile showed a blue fluorescent compound 2 at UV 366 nm. The results of identification using UV-Vis spectrophotometric showed compound 2 has an absorbance at 228 nm and 347 nm, which is typical of flavones class of flavonoids. As shown in Fig. 7 for LC- MS result form coumpond 2. 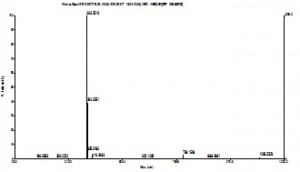 LC MS of compound 2 showed a molecular weight of compound 2 was 392 with the molecular formula C25H28O4 +393.504. Fragmentation pattern of compound 2 indicates the presence of two prenyl groups. Prenylated flavonoid in breadfruit leaves has been reported 11. One of the possible structure is as shown in Fig. 8. More isolate is needed to enable NMR measurement for structure elucidation.

CONCLUSION: The metabolite pattern of breadfruit at various development is similar but different in the quantity of each component. Fallen dry leaves gave the highest ethanol soluble material and  interesting to be explored and exploited as source of herbal medicine. Three compounds had been isolated from fallen dry breadfruit leaves. The isolated compounds were identified as sitostenone, β-carotene, and a flavonoid with two prenyl groups.

ACKNOWLEDGEMENT: We express our thank to Mr Shaikhul Aziz for the assistance in interpretating the NMR spectroscopic data.