ABSTRACT: A simple, precise and accurate RP-HPLC method was developed for the determination of Plerixafor in bulk and pharmaceutical dosage forms. The estimation was carried out on Xterra RP 18 (4.6 x 250mm, 5µm) column using a mixture of Methanol: Water (50:50% v/v) as the mobile phase at a flow rate of 0.8ml/min, the detection was carried out at 215nm. The method was validated for linearity, accuracy, precision, specificity, limit of detection and limit of quantification and robustness as per ICH norms. The retention time of the Plerixafor was 5.481 min. The method produce linear responses in the concentration range of 10-50mg/ml with correlation coefficient (r2) of 0.999. The proposed method is useful for the estimation of plerixafor in its pure and injection dosage forms.

INTRODUCTION: Plerixafor (PRX) belongs to the class anticancer 1. It is used to stimulate the release of stem cells from the bone marrow into the blood in patients with non-Hodgkin lymphoma and multiple myeloma 2. These stem cells are then collected and used in autologous stem cell transplantation to replace blood-forming cells that were destroyed by chemotherapy 3. Plerixafor has orphan drug status in the United States and European Union; it was approved by the U. S. Food and Drug Administration on December 15, 2008. Plerixafor inhibits the CXCR4 chemokine receptor and blocks binding to the marrow compartment of its cognate ligand, SDF-1alpha, which play a role in the trafficking and homing of human hematopoietic stem cells 4 - 6.

Plerixafor 7 is chemically 1, 1’-[1, 4-phenylenebis (methylene)]bis [1, 4, 8, 11- tetraazacyclotetra decane] (Fig. 1). Literature survey revealed estimation of Plerixafor by only one HPLC method and no other methods have been reported for the determination of PRX in pharmaceutical dosage forms. 8 - 10 In this present study an attempt was made to develop rapid and economical RP-HPLC method for the determination Plerixafor in pharmaceutical formulation with better accuracy, precision and sensitivity using C18 column. 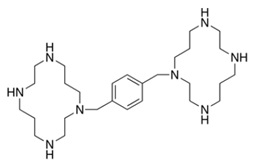 Mobile Phase: Accurately measured 500ml (50%) of Methanol, 500ml of Water (50%) and were mixed and degassed in a digital ultra-sonicator for 10 minutes and then filtered through 0.45µ filter under vacuum filtration. The Mobile phase was used as the diluents 14 - 15.

Preparation of Standard Stock Solution: Stock solution was prepared by transferring 10mg of Plerixafor  into 10ml of clean dry volumetric flasks add about 7ml of diluent and sonicate to dissolve and removal of air completely and make the volume upto the mark with diluent. Further pipette out 0.3ml of above Plerixafor stock solution into 10ml volumetric flask and dilute to the mark with diluent. Standard chromatogram is shown in Fig. 3 and result in Table 1a.

Preparation of Sample Solution: Take average weight of injection sample and weigh equivalent to 10mg of Plerixafor and transfer into 10ml volumetric flask, diluent was added to it and sonicate to dissolve and make the volume with diluent. Further pipette out 0.3ml of above Plerixafor stock solution into 10ml volumetric flask and dilute to the mark with diluent. Sample chromatogram is shown in Fig. 4 and result in Table 1b.

Chromatographic Conditions: Chromatographic separation was performed at ambient temperature on a reverse phase Waters ODS (C18) column, 250 mm × 4.6 mm i.d., 5µm particle size. The mobile phase used in this analysis consists of a mixture of methanol and water in the ratio of 50:50. The mobile phase was filtered, degassed before use. The flow rate was adjusted to 0.8ml/min, the detector wavelength was set at 215nm. The injector volume of standard and sample was 10µl. The solution was injected and chromatograms were recorded. Calibration curve was constructed and regression equation was calculated for Plerixafor.

System Suitability: System performance parameters of HPLC method were determined by injecting standard solutions. Parameters such as number of theoretical plates (N), tailing factor, Retention time (RT) were determined. The results were shown in (Table 1). From system suitability studies it is observed that % RSD values are within the limit i.e. not more than 2 which indicates good performance of the system. The results are tabulated in Table 2.

Linearty: A series of solutions were prepared using plerixafor working standard solution at a concentration levels from 10-50µg/ml  and the peak area response of all solutions are measured. A graph was plotted against the Concentration (µg/ml) on X-axis versus area / response on Y-axis. The detector response was found to be linear with a correlation coefficient of 0.999. Linearity graph is shown in Fig. 5, linearity results are tabulated in Table 4 16 – 19.

Specificity: It is the ability to asses unequivocally the analyte in the presence of components that may be expected to be present. Excipients that are commonly used were spiked into a pre weighed quantity of drugs. Appropriate dilutions were injected into chromatographic system and the quantities of the drugs were determined. The results are tabulated in Table 3.

Precision: Precision studies were performed (Method, Day to day). The results are reported in term of Relative standard deviation. The repeatability studies were carried out by estimating response of 6 different concentrations of Plerixafor and reported in terms of % RSD, % RSD was 0.3, for method precision it was 0.4 and for day to day precision it was 0.24. The results are tabulated in Table 5, 5a and 5b.

LOD and LOQ Limits: The level of detection (LOD) and level of Quantification (LOQ) were conducted on the basis of standard deviation of the response and the slope. The LOD and LOQ for Plerixafor were found to be 1.03µg and 3.14µg respectively.

Robustness: Robustness is a measure of its capacity to remain unaffected by small, but deliberated variation in the method parameters and gives an indication of its reliability during normal The robustness was performed for the flow rate variations from 0.7ml/min to 0.9ml/min and mobile phase ratio variation from more organic phase to less organic phase ratio for Plerixafor. The method is robust only in less flow condition and the method is robust even by change in the Mobile phase ± 5%. The standard and samples of Plerixafor were injected by changing the conditions of chromatography. There was no significant change in the parameters like resolution, tailing factor, asymmetric factor, and plate count. The method passed robustness test with well % RSD. Robustness data was presented in Table 7. 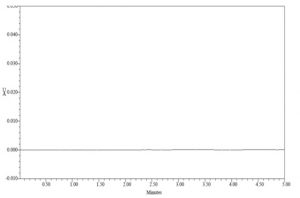 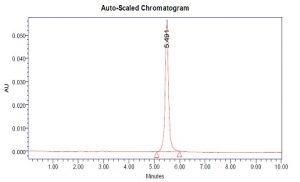 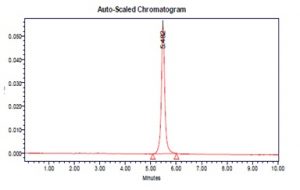 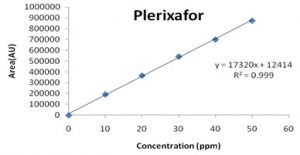 TABLE 5(A): RESULTS OF INTERMEDIATE PRECISION

CONCLUSION: In the present investigation, a simple, sensitive, precise and accurate RP-HPLC method was developed for the quantitative estimation of Plerixafor in bulk drug and pharmaceutical dosage forms. This method was simple, since diluted samples are directly used without any preliminary chemical derivatisation or purification steps. Plerixafor was freely soluble in ethanol, methanol and sparingly soluble in water. Methanol: Water (50:50% v/v) was chosen as the mobile phase. The solvent system used in this method was economical. The % RSD values were within 2 and the method was found to be precise. The RP-HPLC method is more sensitive, accurate and precise compared to the Spectrophotometric methods. This method can be used for the routine determination of Plerixafor in bulk drug and in Pharmaceutical dosage forms.