ABSTRACT: The main objective of the current study was to develop a highly sensitive LC-MS/MS (liquid chromatography-tandem mass spectrometry) technique for the quantification of trifluridine (TFD) in human plasma. Chromatography was processed on Phenomenex-RP-C18 (5 µm, 250 mm × 4.6 mm) column comprising acetonitrile, methanol and 5 mM ammonium formate (45:40:15, v/v) as a mobile phase, infused at a flow of 0.8 ml/min. TFD and internal standard 𝛽-thymidine (TMD) were separated from 150 ml plasma utilizing Phenomenex cartridges. Quantification of the [M+H] +ion of analyte was done with MRM (multiple reaction monitoring) modes in LC-MS/MS utilizing electro-spray ionization. The parent and product ions transitions were monitored atm/z 297-181 and m/z2 41–42 for TFD and TMD respectively. The linearity was processed in the concentration range of 5.0–2000.0 ng/ml with regression coefficient (r2) = 0.999. Method intra and inter-batch precision findings were <3.33% and intra and inter-batch accuracy findings at three different concentrations were within 97.34% to 103.74%. Matrix effects were calculated by determining the %CV values for High and Low QC samples and was found to be 1.65% and 0.73% respectively. The % change for all the re-injected QC solutions was ≤7.45. The method was specific, accurate, precise and stable for more time and the technique was successfully applied for the quantification of trifluridine in human plasma samples.

In ophthalmic preparations, it acts against the virus to treat keratoconjunctivitis and also useful in epithelial keratitis caused by herpes simplex-virus type-I and type-II. This drug also useful in the treatment of metastatic colorectal cancer, when it combines with tipiracil (tablet) 1-3. TFD acts by inhibiting viral replication.

The drug merges with DNA of the virus during the replication process and synthesis of an imperfect protein leads to an increase in the rate of mutations. TFD is also useful in cancer treatment through this mechanism only. The cancer cells will uptake and immediately phosphorylated by thymidine-kinase to active monophosphate. Subsequently, TFD-triphosphate was formed by phosphorylation and it directly merges into the DNA of cancer cells in thymidine place leads to inhibition of DNA functioning, DNA production, and proliferation of cancer cells. TFD mono-phosphate also prevents the thymidylate synthetase enzyme reversibly, which is useful in DNA replication 4-6. Several RP-HPLC methods 7-10 were reported in the literature of TFD for the quantification of TFD as single and with combined dosage forms. No single procedure was reported by utilizing LC-MS/MS technique. The goal of the present research was to develop a simple and highly sensitive bioanalytical LC-MS/MS technique for the quantification of TFD in human plasma samples. 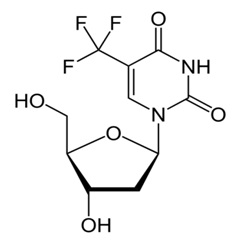 Calibration Standards: TFD 1mg/ml stock solution was processed freshly by diluting 10mg drug in 10 ml of 70% methanol. Calibration standards of eight different concentration levels were processed by spiking blank plasma with TFD standard solution to get the concentrations of 5.0, 20.0, 100, 250, 500, 1000, 1500 and 2000 ng/ml.

Mass Instrument Conditions: The mass instrument was operated in positive (+) ionization (PI) mode. The mass conditions were optimized based on tuning the instrument for TFD and IS by injecting the 500 ng/ml solution of both drugs at a flow of 10 µl/min into the LC mobile phase (0.20 ml/min). Optimized mass instrument settings for specific TFD and IS where: curtain gas (CG) was 21 psi, ISG (ion source gas) 1 was 40 psi, ISG (ion source gas) 2 was 40 psi, an ion-spray voltage was 4500 V, turbo-spray temperature at 550 ℃. Quantitative analysis was achieved by MRM of the transition pairs of transition sm/z 297–181 for TFD and m/z 241–42 for TMD, with 145 ms per transition as dwell time. TFD and IS precursor ions were formed by de-clustering potential (DP) s of 150 and 160 V respectively and precursor ions of TFD and IS were converted into fragments at collision energies (CE) of 25 and 25 EV with nitrogen (N2) gas at a pressure of 5 arbitrary units.

Protocol for Sample Separation: 25 ml of TMDIS working standard solution was mixed with 150 ml of spiked plasma samples and sonicated for 2 min. 500 ml of water was mixes to the resultant solution and subjected to vortex. The resulting solution was filled in Strata XC-33 m separation cartridge, which was conditioned by utilizing 1 ml of methanol and subsequently by 1 ml water. Sample washing was processed by 1.0 ml of water, subsequently drying of the cartridge by N2 gas (1.72 × 105 Pa) for 2.0 min.

Separation of TFD and TMD was processed by utilizing 500 ml of mobile phase into pre-labeled vials. From the resultant solution, 10.0 ml was utilized for infusing into the LC-system.

Selectivity and Sensitivity: Analytical technique selectivity concerning matrix metabolites, constituents, and associated medicaments were evaluated after analyzing 10 lots (lipemic-2, haemolyzed-2 and normal-6) of human K3EDTA-plasma. The resulting processed samples were extracted with SPE and analyzed for TFD at LOQ level. The peak response of all the matrix constituents in the blank sample at TFD and IS retention times should be <20 and 5% of the average peak response of TFD and IS at LOQ level respectively. The sensitivity was estimated by assessing signal to noise-(S/N) ratio in 10 batches of screened and spiked LOQ-samples. The S/N was measured by the formula:

Dilution Integrity: It was processed by making the sample concentration nearly two times the 90% ULOQ concentration. The resultant solution was made dilution (2 and 4 times) with blank plasma to get the solution concentration of solution within linearity range.

Then the samples were evaluated against a fresh calibration standard solution. The acceptable norms were the same as precision and accuracy parameter.

Linear plots (Peak area ratio of analyte and IS peaks versus nominal concentration) were plotted by the least-squares linear regression and reciprocal of the squared concentration (1/x2) used as a weighting factor.

Method Precision and Accuracy: The inter-day and intraday precision and accuracy were processed for TFD in human plasma. Within a day intra-run and between days, inter-run accuracy was analyzed for six replica samples of Quality control at LLOQ, Low, median and high QCs. Method precision was evaluated by determining the % Coefficient of variation for all control samples. The percentage deviation should be <15.0. In the same way, the average accuracy should be ± 15 15-18.

Matrix Effect: Each of LQC and HQC samples after extraction in 6 different blank matrix lots (post-extraction spiked samples) were prepared. Simultaneously, SIX replicates of equivalent aqueous/neat QC samples were prepared and analyzed 19-21. Matrix factor for the analyte and IS in each lot were evaluated using the formula:

Reinjection Reproducibility: This parameter was processed by re-injecting QC-samples from accepted precision and accuracy lot during validation. The re-injected sample concentrations were evaluated by comparing with calibration standard solutions of the same accuracy-precision lot which were estimated 48 h before. The percentage difference between re-injected and original values was measured by the formula:

Stability: Each six low and high QCs were regained from the freezer after 3 freeze-thaw phases. Samples were kept at -30 °C in three cycles of 24.0, 48.0, 72.0 h. Bench-top stability was assessed for a 6.5 h period with standard concentrations. For the long-term stability quality control standards were determined by analysis after 121 days kept at -50 °C. Stability solutions were prepared and separated along with freshly spiked CSs. The accuracy and precision of the stability solutions should be ± 15% of their nominal concentrations. The auto-sampler stability esti-mated after 72 h under auto-sampler (at 10 °C) condition. The freeze-thaw stability was performed by storing the QC solutions at -50 °C (frozen) and thawed at room conditions for 3 times. The change in analyte concentration was less (<15%) then the compound said to be stable 17.

Ruggedness: Method ruggedness was assessed by processing QC standards for one precision and accuracy batch utilizing different columns of same composition by different analysts. The % RSDs for LQC, MQC and HQCs should be ≤ 20% for LLOQ and ≤ 15% for the remaining QC standards.

Internal Standard Selection: Identification and selection of IS was a very important thing in an LC-MS/MS technique. The IS should have similar mass and chromatographic behaviour with an analyte to be determined. Therefore, TMD chosen for TFD internal standard 18, 20.

Method Validation: Method was validated as per the EMEA and USFDA-guidelines and around was no nosiness noticed at the RT (retaining time) of TFD and TMD in the lots of plasma.

The blank, LLOQ, Low, Medium and High QC chromate-grams were represented in Fig. 2 and 3. The S/N-ratio during the method validation was found to be more than 25, which was acceptable in accordance with the USFDA and EMEA-guidelines. 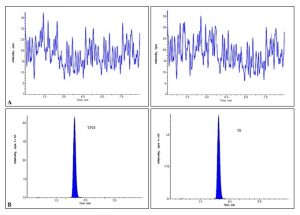 FIG. 2: REPRESENTATIVE CHROMATOGRAMS OF BLANK (A) AND SPIKED LLOQ-SAMPLE (B) OF TRIFLURIDINE

The drug has a limit of quantitation value of 5.0 ng/ml and the precision and accuracy values were found to be 8.62% and 98.12% at LLOQ concentration level. The linearity graph was linear over the concentration range of 5.0–2000.0 ng/ml for TFD. Linearity graph was made using the peak response ratio of drug to IS and the ‘R2’ value was estimated and the value was more than 0.99 and findings were shown in Table 1. Accuracy and precision were processed, and the findings were tabulated in Table 2. The inter-day and intra-day precision were measured in % CV and the values were found between 0.42% to 3.33% and the inter-day and intra-day accuracy findings were present between 97.34% to 103.74%. Matrix effect was estimated by determining the % CV values for High and Low QC samples and was found to be 1.65% and 0.73% respectively. The findings were shown in Table 3.

Stability studies of TFD were processed for Auto-sampler stability (10 °C, 76.90 h), Benchtop stability (ice-cold water, 6.5 h), Freeze and thaw stability (three freeze-thaw cycles), Long-term stability (−50 °C, 121 days) and all the findings were shown in Table 4. The detected average nominal concentrations of TFD were within ± 15% of their particular nominal concentration. There was no change in the concentration of TFD drugs in human K3EDTA for 2.0 h. Method ruggedness for TFD was processed and estimated. The % RSD findings were calculated for the same and were represented in Table 5. 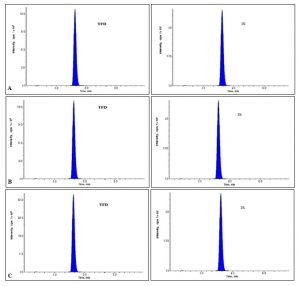 FIG. 3: CHROMATOGRAMS OF TRIFLURIDINE SPIKED (A) LQC, (B) MQC AND (C) HQC SAMPLES

CONCLUSION: A simple and sensitive bioanalytical LC-MS/MS technique for the quantification of TFD in human plasma was developed and validated as per the USFDA and EMEA guidelines. The drug has a limit of quantitation value of 5.0 ng/ml and the precision and accuracy values were found to be 8.62% and 98.12% at LLOQ concentration level. The % change for all the re-injected QC solutions was ≤7.45.  Matrix effect was estimated by determining the % CV values for High and Low QC samples and was found to be 1.65% and 0.73% respectively. The inter-day and intra-day precision were measured in % CV and the values were found between 0.42% to 3.33% and the inter-day and intra-day accuracy findings were present between 97.34% to 103.74%. The drug has more stability under different stability conditions. This developed analytical technique was useful in the routine quality control of TFD in human plasma samples.

AUTHORS’ CONTRIBUTIONS: All authors contributed equally to this manuscript.

CONFLICTS OF INTERESTS: There are no conflicts of interest.