Categories Menu
Home » METHOD DEVELOPMENT AND VALIDATION OF LC-ESI-MS/MS TECHNIQUE FOR THE ESTIMATION OF MODAFINIL IN HUMAN PLASMA; APPLICATION TO PHARMACOKINETICS IN HEALTHY RABBITS

METHOD DEVELOPMENT AND VALIDATION OF LC-ESI-MS/MS TECHNIQUE FOR THE ESTIMATION OF MODAFINIL IN HUMAN PLASMA; APPLICATION TO PHARMACOKINETICS IN HEALTHY RABBITS

METHOD DEVELOPMENT AND VALIDATION OF LC-ESI-MS/MS TECHNIQUE FOR THE ESTIMATION OF MODAFINIL IN HUMAN PLASMA; APPLICATION TO PHARMACOKINETICS IN HEALTHY RABBITS

ABSTRACT: A new simple and sensitive liquid chromatography-electrospray ionization-tandem-mass spectrometric (LC-ESI-MS/MS) technique was developed and validated for the estimation of modafinil in human plasma and the method was applied to study pharmacokinetics in healthy rabbits. Chromatography was attained on Phenomenex- C18 (50mm × 4mm) 5µ column and acetonitrile, methanol and 0.1% formic acid (25:60:15 v/v) mixture as the movable phase at 0.7 ml/min flowrate. Modafinil and modafinil-D5 internal standards were detected at m/z 274.2/229.0, m/z 279.1/234.0 respectively. Modafinil and modafinil-D5 (internal standard) were separated with liquid-liquid extraction. The technique was linear over the 2.0-600.0 ng/ml concentration range. This technique established with intrabatch and inter batch precision within 1.54-7.18% and 1.82-6.25%. This technique established with intrabatch and inter batch accuracy within 98.56-102.80% and 97.62-102.76 %.The drug was shown mean Tmax of 3.833; average Cmax, AUC0͢ t and AUC0͢ α, for test formulation is 677.667; 6306 and 6471 respectively in the pharmacokinetic study on healthy rabbits.

INTRODUCTION: Modafinil acts as a eugeroic for the treatment of narcolepsy (sleepiness), sleep disorder due to different shift work and more day-time sleepiness which was associated with OPA (obstructive sleep apnea) 1-4. It was administered by the oral route. It acts by inhibiting selectively and weakly the dopamine reuptake process and indirectly promotes the releasing of histamines and orexin neurological peptides from the tuberomammillary nucleus and lateral hypothalamus, respectively and leads to contribution to heightened-arousal.

Modafinil activates the cytochrome-P450 enzymes CYP-1A2, CYP-3A4, and CYP-2B6, as well as inhibition of CYP-2C9 and CYP-2C19 in-vitro. Modafinil also produces P-glycoprotein (Pgp) material which affects drug transportation by this glycoprotein (as digoxin). The bioavailability of modafinil is greater than 80% of the administered dose. An in-vitro study of the medicament indicates that 60% of the drug is bound only to plasma proteins in the clinical concentration level. The percentage sometimes changes with change in the concentration. Cmax occurs nearly at 2-3 h after drug administration. In the presence of food, the drug will show slow absorption, but it will not affect total AUC. The half-life of the drug was approximately between 10–12 h range, which was differed by CYP-genotypes, functioning of liver and kidney. The drug is metabolized in the liver and resulting inactive metabolite is excreted in the urine 7-9. 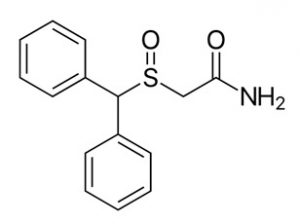 Literature review of modafinil reveals that few analytical quantitative methods were available for the quantification of modafinil in pharmaceuticals which includes UV-spectroscopic method 10-12, high-performance liquid chromatographic 13-17, HPTLC 18 and LC-MS/MS 19, 20 methods. Aim of the present work is to develop simple and sensitive LC-ESI-MS/MS technique for the quantification of modafinil and application of the developed method to study pharmacokinetics in healthy rabbits.

Liquid Chromatography: Modafinil and modafinil-D5 were separated by injecting the sample solution into Phenomenex-C18 (50 mm × 4mm) 5µ column utilizing a mobile phase mixture of acetonitrile, methanol and 0.1% formic acid in the proportion of 25:60:15 v/v. Degasification of the mobile phase was done by filtration through 0.5µ filter paper and followed by sonication. Drug and IS where eluted with isocratic elution by injecting the mobile phase through the stationary column at 0.7ml/min. The autosampler temperature was adjusted to 5 °C.

Mass Scanning Optimization: Modafinil stock solution was processed by dissolving the drug in HPLC-grade methanol. Further dilutions were made with the solvent composition of water and methanol in the proportion of 20:80 v/v. The components were determined by multiple reaction monitoring (MRM) of the transition pairs of transitions m/z 274.2/229.0, m/z 279.1/234.0 for Modafinil and modafinil-D5 respectively.

Mass Spectrometry: The curtain gas (N2) was tuned to a constant figure of 11 units and the temperature of source (at the setpoint) was 500 °C. The electro-spray interface heater (IHE) was switch to on mode and Ion spray (IS) Voltage was fixed at 5000 V for ionization. The mass instrument parameters were adjusted to attain high sensitivity at unit resolution. The MRM mode for modafinil and modafinil-D5 were detected at m/z 274.2/229.0, m/z 279.1/234.01 respectively.

Sample Preparation: To 400µl of plasma, 100µl of IS were vortexed. To the sample 400 µl methanol was added and subjected for centrifugation at 3000 rpm for 15-20 min at 5 °C. The organic portion was dried in lyophiliser. To the residue, 250 µl of the mobile phase was added and transfer a suitable volume of samples into labeled Auto-sampler vials and infused into the LC-ESI-MS/MS system.

Selectivity and Specificity: Potential interference between analyte and matrix constituents was studied by the analysis of 6 blank plasma lots from 6 different sources. A double blank and an LLOQ sample were prepared, infused and analyzed from each lot 21. To estimate potential nosiness between IS and analyte, blank samples spiked with analytes separately (at the upper limit of quantification) and IS were infused and estimated. Peak areas of components co-eluting with analytes should be < 20% of the LLOQ sample peak area. Peak areas of co-eluents of IS should be < 5% of the average IS peak area. The measured concentrations of the LLOQ standard samples should be < 20% from the nominal concentrations.

The data from 3 accuracy and precision batches were considered to analyze the goodness of fit using 1/x and 1/x2 weighing factor. Deviation from nominal concentration should be within ±20% for LLOQ and within ±15% for remaining concentrations. The linear coefficient of correlation (r2) should be ≥ 0.98.

Matrix Factor: To determine matrix effect plasma was processed at the concentrations of HQC and LQC levels after extracting the six different blank matrix batches. Simultaneously six duplicates of equivalent neat quality control samples were processed and analyzed. It was determined by the application of formula:

Recovery: The recovery of the method was estimated by comparing the average peak response of 6 extracted LQC, MQC and HQC samples (4.0, 240.0 and 480.0 ng/ml) to the average peak area of 6 spiked samples with the same quantities of high, medium and low-quality control samples.

Auto-Sampler Stability: This parameter was estimated by processing 6 sets QC-standards (LQC and HQC) and kept in an autosampler. These standard samples were injected after 24 h and were assessed against freshly spiked calibration standards. The resulting values, when compared with nominal concentrations, should be within ±15%.

Dilution Integrity: The drug concentration of above the upper limit of quantification (ULOQ) was processed and precision and accuracy data were determined. The percentage of nominal concentration should be ± 15%.

Stability: LQC and HQC stored samples (n=6) were collected from the freezer after 3 freeze and thaw cycles. Samples were stored at -30 °C in 3 cycles of 24.0, 48.0, 72.0 h. For the long term stability of the drug in QC samples were also assessed by analysis after 4 months of storage at -25 °C &-70 °C. Benchtop stability was evaluated for 7 h period with standard concentrations 23-25. Stability solutions were processed and extracted along with freshly spiked calibration standards. The accuracy and precision of the stability solutions should be ±15% of their nominal concentrations 24.

Method Development and Validation: A procedure for sample extraction was employed for the extraction of drugs and IS from the plasma samples. Chromatographic parameters were improved through different trials to get better resolution and to increase S/N (signal to noise) ratio of analyte and IS. The Mass parameters were monitored by injecting the solution directly into the electrospray ionization source of the mass system.

Acetonitrile portion was increased to get a specific and accurate method after the MRM transitions were fixed. A better resolution and separation were obtained utilizing an isocratic mobile phase of acetonitrile, methanol and 0.1% formic acid (25:60:15 v/v) at 0.7 ml/min flow rate.

Selectivity: Six different lots of blank human plasma samples have opted and interference of interfering constituents at retaining time of analyte and internal standard were evaluated. Interference of matrix constituents was not detected at the retention time and m/z of modafinil and IS in all the lots selected and Fig. 2 and 3, clarifies the chromatograms for blank, blank with IS and LLOQ injections.

Linearity: Linearity graph was constructed over the concentration level of 2.0-600.0 ng/ml in plasma with a correlation coefficient [r2] of 0.998. Three calibration graphs were linear in working concentration range with 8-point calibration utilized for the quantitation by linear-regression. 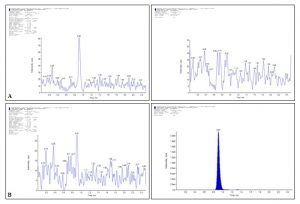 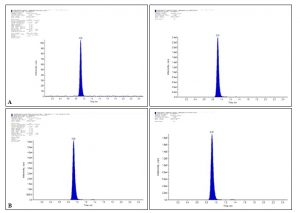 Linearity: Linearity graph was constructed over the concentration level of 2.0-600.0 ng/ml in plasma with a correlation coefficient [r2] of 0.998. Three calibration graphs were linear in working concentration range with 8-point calibration utilized for the quantitation by linear-regression. The linear curve regression equation was found to be y =0.9976x+1.6425. The precision (%CV) detected for the linear curve was found to be ≤ 4.93 for modafinil, and the results were shown in Table 1.

Matrix Factor: The matrix factor was assessed in % coefficient of variance and the values for HQC and LQC standards were 0.28% and 1.46% respectively. The measured values were within the acceptable limit. The findings were represented in Table 3.

Dilution Integrity: Modafinil was diluted up to 20 fold by blank plasma and were analyzed with spiked samples above the upper limit of the calibration standard and samples with the highest concentration. The % nominal was within ­±15 and the observed precision was within <15%. This demonstrates that the sample can be diluted up to 20 times, and yet the results are predictable and reproducible.

Stability Studies: The stability data of modafinil, which includes auto-sampler, freeze-thaw, long-term and bench-top, were within the acceptance limit. Results were revealed in Table 4.

Recovery: The percentage recovery was assessed by estimating the absolute peak response of drugs and IS from a human plasma sample processed according to the method. The extent of retrieval of drug analyte and of the internal reference standard should be consistent, precise and reproducible. The mean overall recovery of analyte and IS was found to be 97.26% and 98.01% respectively.

Pharmacokinetics: The Pharmacokinetic para-meter of modafinil was calculated from the graph obtained by taking plasma concentration on Y-axis and time on X-axis using Pk-solver software. In this study trapezoidal rule was considered for the calculation of area under the curve from 0 to 48 hours (AUC0-48). Modafinil was shown mean Tmax of 3.833; mean Cmax, AUC0͢ t, and AUC0͢ α for test formulation is 677.667; 6306 and 6471 respectively. The results were shown in Table 5, 6 and Fig. 4. 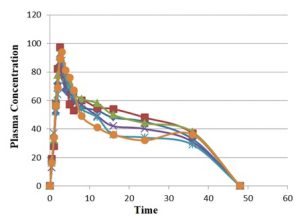 CONCLUSION: In this research article an LC-ESI-MS/MS technique for the quantification of modafinil in plasma was efficiently developed and validated. Chromatography was attained on Phenomenex C18 (50 mm × 4 mm) 5µ analytical column with acetonitrile, methanol and 0.1% formic acid (25:60:15 v/v) as mobile phase at 0.7 ml/min flow rate. All the validation parameters: selectivity, accuracy, precision, recovery, stability, matrix effect and dilution integrity were within the acceptance limit. This technique was successfully applied to study pharmacokinetic parameters in six male healthy rabbits and the drug was shown mean Tmax of 3.833; mean Cmax, AUC0͢ t and AUC0͢ α, for the test formulation is 677.667; 6306 and 6471 respectively in the pharmacokinetic study on healthy rabbits.

AUTHORS CONTRIBUTION: All the authors contributed equally to this manuscript.

CONFLICTS OF INTEREST: The authors claim that they have no conflict of interest.