ABSTRACT: Zopiclone belongs to a class of medicines commonly called Z-drugs. It is a novel hypnotic agent used in the treatment of insomnia. Its mechanism of action is based on modulating benzodiazepine receptors. A Reverse Phase High Performance Liquid Chromatography method was developed and validated for the quantification of zopiclone in bulk and tablet dosage form. Chromatography was achieved using a Waters X Bridge C18 column (50 x 2.1 mm, 5μ) eluted with a mixture of mobile phase composed of ammonium bicarbonate (5mM, neutral) and acetonitrile in a gradient mode at a flow rate of 1 ml/min. The detection of eluent from the column was detected using photo diode array detector (PDA) at 214nm. The stability indicating assay method was developed and validated as per the ICH guidelines using the required parameters. Linearity was observed within the concentration range of 50-300μg/ml with coefficient of correlation 0.999. The LOD and LOQ were 9.416μg/ml and 28.534μg/ml, respectively. The mean recovery was found to be 100.1%.

Both zopiclone and benzodiazepines act indiscriminately at the benzodiazepine binding site on α1, α2, α3 and α5 GABAA containing receptors as full agonists causing an enhancement of the inhibitory actions of GABA to produce the therapeutic (hypnotic and anxiolytic) and adverse effects of zopiclone 2-4.

Its molecular formula is C17H17ClN6O3 and its molecular weight is 388.808 g/mol. It has following structural formula: 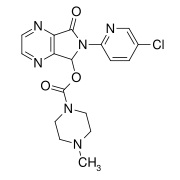 The separation of the analyte was done by using Waters e2695 HPLC instrument with a Waters X Bridge C18 column (50 x 2.1 mm, 5μ) column. The instrument was equipped with a pump (2695), injector, PDA Detector (2996) and column oven. Data acquisition was done by using Empower software. Degassing of the mobile phase was done by using an ultrasonic bath sonicator. A Mettler Toledo (XS 205 dual range) electronic balance was used for weighing the materials. Class ‘A’ Borosil glassware were employed for volumetric and general purpose in the study. The reference sample of Zopiclone was gifted by Jubilant Life Sciences, Noida. The tablets of Zopiclone (The branded formulation of Intas Pharmaceuticals) were procured from the local market. Ammonium bicarbonate (AR grade, Merck), Acetonitrile (HPLC grade, Sigma Aldrich), Methanol (HPLC grade, Sigma Aldrich), water (Milli-Q / HPLC grade) were used.

Buffer and Acetonitrile were taken in separate bottles, filtered through 0.2µ Nylon membrane filter paper, sonicated, degassed and mixed automatically as per the method.

Milli-Q water: Acetonitrile (ACN) in a ratio (30:70) was mixed well, sonicated and degassed. It was also used as blank solution.

About 5 mg of Zopiclone standard was weighed accurately and transferred to a 10ml volumetric flask. A little quantity of diluent was added to dissolve; sonicated and degassed. The volume was made up to 10 ml and sonicated (500ppm). Further 2 ml of the above solution was diluted to 5 ml with diluents (200ppm).

10 tablets of Zolpidem, each containing 7.5 mg of Zopiclone, were weighed and powdered. To prepare 200μg/ml concentration of sample solution, a quantity of powder equivalent to 10 mg (110.005 mg) was weighed approximately and transferred to a 10 ml dried volumetric flask. The sample was initially dissolved in diluent and sonicated for 15 min. The volume was made up to 10ml and filtered through 0.2μm Nylon filters. Then 2 ml of this solution was further diluted to 5 ml with same diluent to get the final concentration of 200μg/ml and sonicated for 15 min again.

The method was validated in compliance with ICH guidelines. The parameters determined for validation were specificity, precision, accuracy, robustness, linearity, Limit of Quantification and Limit of Detection, system suitability and stability of analytical solution.

The method specificity was assessed by comparing the chromatograms obtained from a placebo solution containing a mixture of most commonly used excipients without the drug and another solution containing the excipients with the drug. These solutions were prepared in the diluent. The drug to excipient ratio used was similar to that in the commercial formulation. The mixtures were filtered through 2μ membrane filter before injection. The placebo solution and the sample solution (placebo and the drug) were injected into HPLC system separately in triplicate and the relevant chromatograms observed.

Six replicates of standard solution of Zopiclone were injected into HPLC system.

The precision of the procedure was determined by repeatability. Six sample preparations were made from a single batch of Zopiclone tablets and analyzed as per the proposed method.

Ruggedness of method was verified by analyzing six sample preparations of same batch used under method precision as per proposed method by different analysts using different instrument and on different day. The amount of Zopiclone in Zopiclone tablets was determined. % RSD for % assay of Zopiclone was calculated, for six preparations.

Linearity of response was performed using the standard solution in a range of 50ppm to 300ppm [50% - 150% of the test concentration].

Stability of Zopiclone in analytical solution was verified by analyzing sample solution initially and also at different time intervals up to 48 hrs when the sample was stored at room temperature.

To evaluate robustness, following variations were made in the method and the samples were analyzed in triplicate. Change in Flow rate by (10%), Change in Organic content variation in mobile phase (± 2mM). System suitability was evaluated in each condition and results were compared with method precision results.

Limit of detection (LOD) is defined as the lowest concentration of analyte that gives a measurable response. LOD is determined based on signal to noise ratio (S/N) of three times typically for HPLC methods. The limit of quantification (LOQ) is defined as the lowest concentration that can be quantified reliably with a specified level of accuracy and precision.

RESULTS AND DISCUSSION: A mixture of mobile phase composed of ammonium bicarbonate (5 mM, neutral) and acetonitrile in a gradient mode at a flow rate of 1 ml/min was found to be a suitable solvent system. Fig. 2 shows a typical chromatogram obtained from the analysis of a reference standard using the proposed method for zopiclone. As shown in this figure, a symmetrical peak represents zopiclone. The retention time observed in the assay (3.28 min) associated with the simple sample preparation (for tablets) allowed a rapid determination of the drug in pharmaceutical products Fig.3. 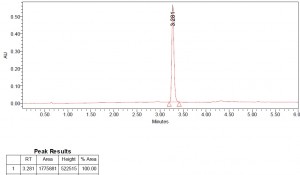 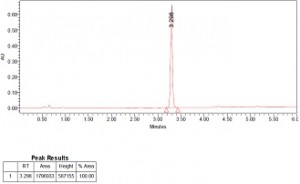 There was no interference from blank and placebo at the retention time of analyte peak. The absence of additional peaks in the chromatogram indicates non interference of the commonly used excipients in the tablets and hence the method is specific Fig. 4. 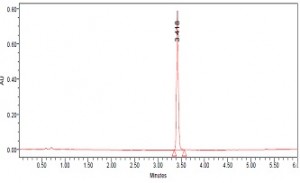 FIG. 4: A REPRESENTATIVE CHROMATOGRAM OF ZOPICLONE FROM THE TABLET SOLUTION

System Precision: % RSD of Zopiclone peak area counts from six replicate injections of standard solution was less than 2.0 and it meets the acceptance criterion. The results were summarized in Table 2.

The %RSD for %Assay of Zopiclone for six sample preparations was less than 2.0% and meets the acceptance criterion.

Analytical method meets acceptance criteria for recovery study. Hence the method is accurate and precise. The results were summarized in Table 4.

Linearity: The results are tabulated in Table 5 and represented graphically Fig. 5. The relevant correlation coefficient value is more than 0.99.TABLE 4: ACCURACY DATA

Cumulative %RSD is less than 2.0 at each time interval. The results are tabulated in Table 6.

The solution was found to be stable up to 48 hrs at room temperature. Hence it is concluded that the proposed analytical method meets the pre-established acceptance criteria.

The results obtained are tabulated in Table 7 and 8. Overall %RSD is than 2.0% for individual experiment. As method meets pre-established acceptance criterion, the method is considered to be robust for small changes in flow rate, concentration of buffer for mobile phase.

The LOD and LOQ of Zopiclone obtained by the proposed method were 9.416 and 28.534μg/mL respectively.

The flow rate programming of gradient mobile phase, cut down an overall time of sample analysis and thereby made the method more cost effective and rapid and produced a quicker method for zopiclone detection using basic buffer.

ACKNOWLEDGEMENTS: I express my humble regards to Mrs. Richa Singhal (Head of HPLC Department) Jubilant Chemsys R&D Centre, Noida, whose expertise helped me to carry out my research successfully.