ABSTRACT: A simple, rapid, precise, sensitive and reproducible Reverse Phase High-Performance Liquid Chromatography (RP-HPLC) method has been developed for the quantitative analysis of Diclofenac sodium in the chocolate dosage form. Chromatographic separation of Diclofenac sodium was achieved on waters alliance-e2695, by using waters symmetry C18, 150 mm × 4.6 mm, 3.5 µm, column and the mobile phase containing 0.1% formic acid & ACN in the ratio of 30:70% v/v. The flow rate was 1.0 ml/min; detection was carried out by absorption at 275 nm using a photodiode array detector at ambient temperature. The calibration curve was linear over the range of 5-75 µg/ml. The number of theoretical plates and tailing factor for Diclofenac sodium was NLT 2000 and were not more than two, respectively. The proposed method was validated according to ICH guidelines. The method was found to be simple, economical, suitable, precise, accurate & robust method for quantitative analysis of Diclofenac sodium and study of its stability.

INTRODUCTION: Diclofenac sodium (sodium; 2-[2-(2, 6-dichloroanilino)phenyl]acetate) Fig. 1  is one of the potential NSAIDS which is commonly used as an anti-inflammatory, analgesic and antipyretic. It is used for the long term symptomatic treatment of several alignments such as osteoporosis, rheumatoid arthritis, ankylosing spondylitis. Diclofenac is rapidly and completely absorbed after oral administration, and peak plasma concentration is reached within 2-3 h. It undergoes extensive first-pass metabolism; hence only 50% of Diclofenac is available systemically. Its half-life in plasma is 1-2 h.

It is also used for acute musculoskeletal injury, acute painful shoulder postoperative pain; dysmenorrheal 1, 2, 3. A literature survey revealed that a number of analytical methods have been developed for the determination of Diclofenac sodium alone and in combination in various dosage forms and biological samples using HPLC, HPTLC and spectrophotometry techniques 4-13. 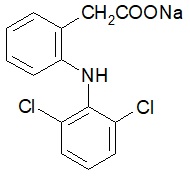 We have developed a new accurate and precise RP-HPLC method for the determination of Diclofenac sodium in a chocolate dosage form. The developed method is validated as per ICH guidelines 15.

Equipment and Chromatographic Conditions: A waters alliance liquid chromatography (model 2695) monitored with empowering 2 data handling system and fitted with a Waters X-Bridge C18, (150 mm × 4.6 mm, 3.5 µm) and a diode array was used for this study. The mobile phase used consisted of 0.1% Formic acid & ACN in the ratio of 30:70% v/v. All the chromatographic runs were carried out in isocratic elution mode with a flow rate of 1ml/min, and the sample injection volume was 10 µL, detector wavelength was set at 275 nm.

Preparation of the Mobile Phase and Diluent: 0.1% formic acid and acetonitrile were mixed together in the ratio of 30:70 v/v and employed as the mobile phase. The same solution was also used as the diluents for preparing drug dilutions.

Preparation of Working Standard Solution of Diclofenac Sodium: About 50 mg of Diclofenac sodium was weighed accurately and transferred into a 100 ml volumetric flask. 70 ml of the diluents were added to it and sonicated to dissolve the drug. The volume was made up to the quantity with the diluents and mixed well. This was used as a standard stock solution. 5.0 ml of the stock solution was transferred to 50ml volumetric flask and made empowering the volume using diluents to get a 50 µg/ml of Diclofenac sodium. This was used as a working standard solution.

Estimation of the Drug from the Chocolate Dosage Form: Ten chocolates were weighed and crushed in a mortar. An amount of equivalent to about 50 mg of Diclofenac was transferred into a 10 ml volumetric flask and diluent was added to it and sonicated. The solution is filtered through a 0.45μ nylon syringe filter. 5 ml of the filtrate was transferred to 50 ml volumetric flask and made up the volume using diluents and mixed well. Five replicate injections of the sample were analyzed on the column. The mean of the peak areas of the drug was found out and the drug content in the formulation was calculated by using the regression equation obtained for the pure drug.

RESULTS AND DISCUSSION: The method development was preceded with the determination of the wavelength of Diclofenac sodium by the photodiode array. The wavelength was found to be 275 nm and is shown in Fig. 2. During the method optimization studies trails were carried out for an ideal separation of the drug-using different mobile phases and different chromatographic conditions. Finally, the following conditions were found to be optimum after evaluating the column efficiency by parameters like theoretical plates and tailing factor.

Specificity: The chromatograms obtained for the samples of chocolate dosage form demonstrate that no interfering peaks were found at the retention time of Diclofenac sodium due to excipients.

Linearity: The regression of the plot was computed by least squares method and is shown in Fig. 5. The calibration curve of the drug was linear over the concentration range of 5-75 µg/ml with the correlation coefficient 0.999 and the % RSD for each component was less than 2.

System Suitability: System suitability parameters were studied with six replicates of the standard sample solution and the corresponding values are presented in Table 4.

Limit of Detection (LOD) and Limit of Quantification (LOQ): LOD and LOQ in the sample were determined with acceptable precision and accuracy. The results were presented in Table 5.

TABLE 5: LIMIT OF DETECTION AND LIMIT OF QUANTIFICATION DATA

Robustness: Robustness of the proposed analytical method was determined by varying flow rate and mobile phase composition. Percentage RSD was given in Table 6.

CONCLUSION: The developed RP-HPLC method is simple, sensitive, precise and accurate and can be used for the estimation of Diclofenac sodium in the chocolate dosage form for quality control analysis.

ACKNOWLEDGEMENT: All the authors are thankful to A. M. Reddy Memorial College of pharmacy for providing facilities to bring out this work.