INTRODUCTION: The diesel engines dominate the field of commercial transportation and agricultural machinery due to its ease of operation and higher fuel efficiency. The consumption of diesel oil is several times higher than that of petrol. Due to the shortage of petroleum products and its increasing cost, efforts are on to develop alternative fuels especially, to the diesel oil for fully or partial replacement. It has been found that the vegetable oils are promising fuels because their properties are similar to that of diesel and are produced easily and renewably from the crops. Vegetable oils have comparable energy density, cetane number, heat of vaporization and Stoichiometric air-fuel ratio with that of the diesel fuel.

None other than Rudolph Diesel, the father of diesel engine, demonstrated the first use of vegetable oil in compression ignition engine. He used peanut oil as fuel for his experimental engine. Viscosity of vegetable oils is several times higher than that of diesel. Viscosity of liquid fuels affects the flow properties of the fuel, such as spray atomization, consequent vaporization, and air-fuel mixing in the combustion chamber. Higher viscosity of oils had an adverse effect on the combustion in the existing diesel engines.

In recent years 1, 2, systematic efforts were under taken by many researchers to determine the suitability of vegetable oil and its derivatives as fuel or additives to the diesel. Blending, emulsification, thermal cracking and transesterification are the commonly adoptable methods to use the vegetable oil as fuel in diesel engines. Recent years, biodiesel have received significant attention both as a possible renewable alternative fuel and as an additive to the existing petroleum-based fuels. Biodiesel exhibits several merits when compared to that of the existing petroleum fuels. Many researchers have shown that particulate matter, unburned hydrocarbons, carbon monoxide, and sulfur levels are significantly less in the exhaust gas while using biodiesel as fuel. However, an increase in the levels of oxides of nitrogen is reported with biodiesel.

Presently, considerable research has been undertaken to understand the performance characteristics of biodiesel-fueled engine as well as the biodiesel production technology.

Biodiesel is a chemically modified alternative fuel for use in diesel engines 4, derived from vegetable oils and animal fats. Biodiesel is produced commercially by the Transesterification of vegetable oils with alcohol. Methanol or ethanol is the commonly used alcohols for this process. The direct use of alcohols as fuel causes corrosion of various parts in the engine. The transesterification process solves this problem. The carbon cycle of vegetable oils consists of release and absorption of carbon dioxide. Thus, the accumulation of carbon dioxide in atmosphere reduces. This was an exploratory investigation to determine the effect of fuel on the engine performance characteristics and infrastructure needed to use this fuel. This testing proved that the biodiesel could easily be used as a feasible alternative fuel.

The experimental results of various researchers support 5, 6 the use of biodiesel as available alternative to the diesel oil for use in the internal combustion engines. It is also important to note that most of the experiments conducted on biodiesel are mainly obtained from refined edible type oils only. The price of refined oils such as sunflower, soybean oil and palm oil are high as compared to that of diesel. This increases the overall production cost of the biodiesel as well. Biodiesel production from refined oils would not be viable as well as economical for the developing countries like India.

Hence, it is better to use the non-edible type of oils for biodiesel production. In India, non-edible type oil yielding trees such as mahua, sal, linseed, castor, karanji, neem, rubber, jatropha, kusum and cashew are available in large number. The production and utilization of these oils are low at present, because of their limited end usage. Utilization of these oils/ biodiesel as fuels in internal combustion engines is not only reducing the petroleum usage, but also improves the rural economy. Efforts are made here to produce biodiesel from typical unrefined oil (Schlichera oleosa seed oil) and to use it as the fuel in diesel engines.

Characterization of Schlichera oliosa seeds oil: In the present investigation 7, 8, the Schlichera oliosa seed oil, a non-edible type vegetable oil is chosen as a potential alternative for producing biodiesel and use as fuel in compression ignition engines. The estimated availability of Schlichera oleosa seed is about 25, 000 oil potential per tones per annum. In the past Schlichera Oliosa seed oil was exported from India to Germany. This market has now fallen away. Current (1979) production in India is 4000-5000 tons. Schlichera Oliosa seed kernels (0.45 lacks of tones of seed) contain 40.3% of yellowish brown colored oil. The one or two almost round seeds some 1.5cm in diameter and weighing between 0.5 and 1.0g.

The weight of 1000 seeds is 500-700 g. Schlichera oleosa evergreen trees with the height up to 30 m and the girth up to 3 m. The leaves are paripinnate, 20-40 cm long. The leaflets are 2 to 4 pairs, elliptic or elliptic-oblong, coriaceous, margins entire and apex rounded. The flowers are minute, yellowish green; male or bisexual, fascicled in spike like axillary racemes 7.5 to 12.5 cm long. The fruits are berry, globose or ovoid, and hard skinned. The seeds are brown, irregularly elliptic, slightly compressed, oily, enclosed in a succulent aril.

Methodology: The objective of this study is to develop a technique for producing biodiesel from a low-cost feedstock like crude Schlichera oleosa seed oil. The esterification process consists of the following two stages.

Acid-Esterification: The acid-catalyzed pretreatment process reduces the high FFA content of the crude oil to about 2% FFA.

Alkaline-Transesterification: The products of first step are transesterified using alkaline catalyst. The important parameters affecting the esterification process such as alcohol to vegetable oil molar ratio, catalyst amount, and reaction temperature and reaction duration are analyzed.

Esterification Procedure: Esterification is done as a pretreatment step to the transesterification procedure when the FFA content is higher then 2%. In practice, it is a bit more complicated to implement then transesterification. A by product of the process is water, which impedes the reaction. The Molecular weight of Schlichera oleosa seed oil is 840 grams. As there is more FFA in the oil, more methanol percentage wise must be added to compensate for the water. To overcome this, industrial producers use counter current reactors that enable a continuous flow of high FFA oil in and water out.

A round bottom flask of 1500 cm3 is used as laboratory scale reactor for the present analysis. The Schlichera oliosa seed oil in the flask was heated on a hot plate having magnetic stirrer arrangement. The mixture was stirred at the same speed for all test runs. The temperature maintained for the whole esterification process is between 55-60oC and maintained 2 hr. Alcohol to vegetable oil molar ratio is one of the important factors that affect the conversion efficiency of the process. For the Stoichiometric transesterification, 3 mol of alcohol are required for each mole of the oil.

However, in practice, the molar ratio should be higher than this theoretical ratio in order to drive the reaction towards early completion. Sulphuric acid is used as catalyst in the acid-catalyzed pretreatment. Experimentally it is optimized that 5ml per liter by volume of the sulphuric acid (H2SO4) a molar ratio of 6:1(ratio of methanol and oil) gave the maximum conversion efficiency. After the reaction is completed, the products are allowed to separate into two layers. The water and glycerol very low density is coming upper layer and lower layer is ester oil, this is called as pretreatment oil as shown fig. 3. This process is called as esterification processes.

Transesterification Processes: Bio-diesel is produced by transesterification which is a process of using either ethanol or methanol, in the presence of a catalyst, such as potassium hydroxide or NaOH, to chemically break the molecule of an oil or fat into an ester and glycerol. This process is a reaction of the oil with an alcohol to remove the glycerine, which is a by product of bio-diesel production. Figure 2 shows the transesterification reaction. 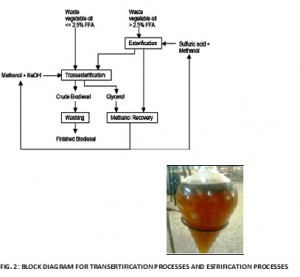 The reactor for producing biodiesel from Schlichera oleosa oil is a small batch type reactor. The first we are taken pretreatment oil temperature is 50-55oC. The products of the first stage pretreatment oil are used as the input of the alkaline Transesterification process. A molar ratio of 6:1 and 10grms by weight of potassium hydroxide (KOH) is found to give the maximum ester yield. The reaction time is maintains 2hr at 60oC. After the reaction is completed, the products are allowed to separate into two layers. The lower layer contains impurities and glycerol. This top layer (ester) is separated and purified using distilled water. Hot distilled water (20% by volume) is sprayed over the ester and stirred gently and allowed to settle in the separating funnel. The lower layer is discarded and upper layer (purified biodiesel) is separated.

Transesterification of the oil produces methyl esters (biodiesel) and glycerol. The methyl ester layer is a light yellow liquid that is on top or bottom of the glycerol layer, which is dark brown in color. The mixtures may be kept overnight and allowed to separate by gravity. Otherwise, the methyl ester is separated from the glycerol and washed with water and acetic acid until the washing water is neutral. The methyl ester is then dried by heating. Materials and energy flows for the transesterification of Schlichera oliosa seed oil into biodiesel are shown in Fig. 3. 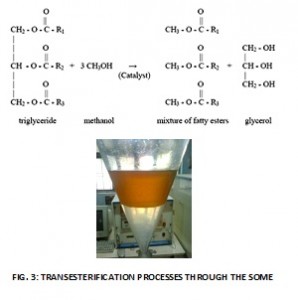 FIG. 3: TRANSESTERIFICATION PROCESSES THROUGH THE SOME 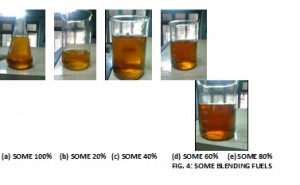 The result shows that, transesterification improved the important fuel properties of the oil like specific gravity; viscosity; flash point and acid value. The comparison shows that the methyl ester has relatively closer fuel properties to diesel than that of original unrefined Schlichera oleosa seed oil.

The viscosity was substantially reduced from a value of 41 to 14 cSt. The calorific value of methyl ester is lower than that of diesel because of its oxygen content. The flash point of the ester is higher than that of diesel. A different percentage of biodiesel addition with diesel can definitely improve the flash point of the resultant mixture. Hence, this fuel is safer to store and transport compared to that of pure diesel.