ABSTRACT: The extensive study on O - methylated flavonoids reveals that substitution with methyl group enhances the radical scavenging behavior in certain compounds. Due to potential applications of C-glycosides in metabolic engineering, methylation in these flavonoids needs to be analyzed in both theoretical and experimental levels for their radical scavenging behavior. In this work naturally occurring C- glycosyl flavonoid apigenin 8-C-glucoside (vitexin) is theoretically simulated by substituting the C4′, C5 and C7 hydroxyl positions with methoxy unit and studied with the aid of density functional theory (DFT) for radical scavenging behavior. Structural stability is attained through B3LYP/6-311G(d,p) theory using Gaussian 03 package which provided the stable conformer for the studied compound without imaginary frequency. Structural activity is analyzed with the support of parameters like kinetic energy (temperature independent), HOMO-LUMO, molecular descriptors, Mulliken charge density analysis and compared with vitexin. Combined investigation of the parameters above revealed the superiority of phenyl hydroxyl vitexin over phenyl methoxy vitexin for radical scavenging activity unlike its O methylated flavonoids.

INTRODUCTION: Flavonoids are the secondary metabolites which are well known for their cytoprotective property, anti-inflammatory activity and oxidative stress-reducing action 1. Exploring the antioxidant mechanism of flavonoid compounds through structural activity relationship (SAR) is gaining interest for nearly two decades. Numerous analyses are done for the investigation of SAR, which includes atoms in molecules (AIM), natural bond orbital analysis (NBO), atomic population analysis and molecular descriptors calculation 2. Mainly this analysis gives information about the ability of the flavonoids to scavenge the radicals.

The radical scavenging behavior is governed by the charge transfer mechanism which results in hydrogen atom abstraction, protonation and deprotonation 3. In the present study, an attempt has been made to evaluate the active site for radical scavenging process through the energy profiles of the phenolic rings present in the flavonoid skeleton of methoxyvitexin, and it is compared with vitexin. Kinetic energy analysis yields information about the response of the atoms in the compound by the substitution of a methoxy group at different positions in terms of instability 4.

RFW Bader et al., (1969) proposed that the instability of a molecular system results due to the higher kinetic energy of the system. In vitexin, the rings A and C are tightly bound together thereby exhibiting a higher rate of stability which requires more energy for bond dissociation 5. Automatically the B-ring captures more attention because this site needs less bond dissociation energy concerning radical scavenging process and B-ring be the right candidate to prove the instability using kinetic energy analysis. 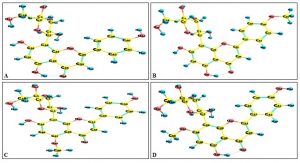 The equations corresponding to K(r) and G(r) are 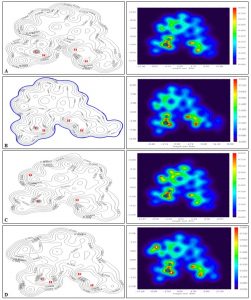 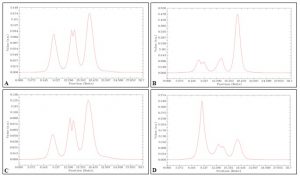 It is noted from the electron density plot, that vitexin and 5 methoxyvitexin showing analogous charge density distribution, i.e. 4' and 7 positions seem to be electronegative regions and the charge densities are prominent in these regions where C ring is situated along with glucose unit. However, methoxy unit doesn’t show any significant development concerning electronegativity when compared with hydroxyl units, and charge density distribution radiates from A ring to C-ring. Regarding antioxidant activity, the flavonoid compounds with more number of –OH groups favors higher reactivity than the compounds with –OCH3 groups due to the steric effect and increased lipophilicity. But the presence of some hydroxyl units cannot be considered as a deciding factor for antioxidant activity 10. In the present case, for charge density ρ(r) distribution following order has been observed from Fig. 2.

It is very interesting to note that G(r) follows the same order as that of ρ(r) and the higher degree of the kinetic energy of 5 MeOvitexin is due to the present high density of charge carriers. At the same instant, the same phenomena have been observed in the case of 4'MeOvitexin due to the steric effect, lipophilicity and the kinetic energy of vitexin are strongly influenced by unstable glucose unit. In the case of 4' methoxyvitexin, B ring shows sharp peaks for kinetic energy distribution. Therefore, it is concluded that the presence of methoxy unit results in an unstable structure of C glucoside and increases charge density distribution on the rings. Instability of a ring may be due to a decrease in units of –OH groups. In this context, the B-ring exhibits higher order of reactivity in the presence of –OH groups than –OCH3 groups.

Molecular Descriptors: Molecular descriptors such as IP, EA, χ, η, S and ω are calculated based on the orbital energies and reported in Table 2. It reveals that apart from the superiority of phenyl hydroxyl over phenyl methoxy, methoxy functional group is less supportive for the dissociation process and is taken into account during the radical scavenging process.

Mulliken Population Analysis: The investigation of charge delocalization and localization has been carried out by Mulliken population analysis technique and the results are depicted in Table 3. n- π* transition is witnessed in and around B-ring by the accumulation of atomic charges 12. In all the studied compounds possession of a higher number of atomic charges are found at B ring rather than A and C rings and this once again proves that the B ring is a better candidate for radical scavenging activity. Another factor which is observed from Table 3, in addition to B rings of all the compounds, 7 MeO vitexin is also a good candidate for radical scavenging behavior based on the atomic charges.

CONCLUSION: Methylated structure of the naturally occurring flavonoid vitexin has been simulated, analyzed and compared theoretically using B3LYP/6-311G(d,p) level of theory with the vitexin. Kinetic energy distributions studies clarify the instability as well as steric effect created by glucose unit and methoxy unit in both compounds using prominent peaks in the particular position where these functional units are located. This is further supported by HOMO-LUMO energies and molecular descriptors which elucidates the higher order of dissociating ability of hydroxyl group than methoxy group. Mulliken charge density analysis depicts the B-ring activity and contribution offered by methoxy unit for radical scavenging activity.

ACKNOWLEDGEMENT: The authors acknowledge the Science and Engineering Research Board, Department of Science and Technology (DST-SERB), Government of India for funding (EMR/2016/002892).