INTRODUCTION: Liposomes has been extensively used as drug delivery systems 1-10. In addition, a number of liposomal formulations have been investigated in preclinical and clinical trials 11.  Aqueous liposomal dispersions of phosphatidylcholines have been widely studied as model membranes because of their striking resemblance to biological membranes 12, 13. The interaction of CPZ-HCl with phospholipid liposomes has been reported 14-20.

CPZ-HCl was observed at anesthetic concentrations to protect human erythrocytes against hemolysis, increase the mean cellular volume and decrease the sedimentation rate of the erythrocytes 21. The adsorption of ions onto the lipid membranes and liposomes has been reported 22–27.

The adsorption processor ion-membrane interactions not only induces physicochemical and electrical surface changes in the membrane, but also plays an important role in its overall functional behavior such as membrane fusion and transport 28. Ion adsorption on the lipid membrane surface has been explored using various techniques, including micro-electrophoresis 29, 30, A nuclear magnetic resonance 31, 32, Langmuir method 33, 34, molecular dynamics simulations 35, 36, Doppler electrophoretic light scattering 37 and more recently using a technique that combines on-chip micro-capillary electrophoresis with a low noise EM-CCD camera 38.

In particular, micro-electrophoresis can be used to determine membranes surface charge density which is an important parameter for characterizing equilibria in natural or artificial membranes. Membrane surface charge density was observed to strongly depend on pH, ionic strength and the lipid composition of the membrane 39. The zeta potential as calculated using electrophoretic mobility, is considered an important physicochemical parameter of liposomal drug formulation, not only assessing in vitro physical stability, but also in vivo stability 40-42. Zeta potential of liposomes has also been used to determine the variations of the degree of coverage of individual liposomes of different lipids and to calculate the dissociation constants and the stoichiometry of the binding 43.

Electrophoretic mobility study of phosphatidylserine liposomes, reflected that the binding of certain trypanocides to phospholipids correlate with their biological activity 44.

The effect of charge inducers such as stearylamine or dicetylphosphate as positive and negative charge inducers respectively on the size and encapsulation efficiency of soybean phosphatidylcholine/ cholesterol liposomal ciprofloxacin, showed that both liposomal size and drug encapsulation efficiency were increased; where positively charged liposomes showed superior entrapment efficiency over both negatively charged and neutral liposomes 45.

A Rank (II) micro-electrophoresis apparatus (Rank Bros., Cambridge) was used. The apparatus consists of a cylindrical glass cell placed in a thermo stated water bath kept at 25oC or 37oC. A platinum black electrodes, prepared by oxidation in platinum chloride for DMPC liposomes in water or low ionic media (< 0.1M) or Ag/AgCl reversible electrodes for DMPC liposomes in high ionic strength media, where placed at either end of the cell. The particle mobility was followed using the microscope attachment at a magnification of 400X.

EPM (UE) has been determined using the following relationship

The distance travelled by the particles was kept constant at 60 µm throughout the study. The voltage applied was adjusted at 40v. The inter electrode distance (L) was determined using 0.1 M KCl solution of known specific conductivity (K), from the following equation

Where A is the cross sectional area of the cell=πr2 (r=the radius of the cell).

R=the resistance 0.1 M KCl solution which was calculated using a conductivity bridge (Wayne-Kerr B462) and by plotting the voltage (v) against current (I) where the gradient is equal to R. A value of 6.96 cm was obtained for the inter electrode distance (L). The apparatus was calibrated using human RBC in 1/15M phosphate buffer (pH 7.4) at 25oC. A value of -1.27 µms-1v-1cm for UE was obtained compared with a literature value of -1.28 µms-1v-1cm 46.

Accurately weighed DMPC was dissolved in chloroform (1mg.ml-1) in around bottom flask. The chloroform was evaporated on a rotary evaporator (Rotavapor-R, Buchii) at 40oC. Traces of chloroform were removed by introducing a jet of dry N2. The dry lipid film is then dispersed indifferent media in the absence or presence of different CPZ-HCl concentrations to make a final lipid concentration of 0.015g.ml-1. The dispersions were swirled using a vortex mixer at 40oC to form large multilayer liposomes. The different liposomal dispersions were equilibrated in a water bath at 25oC or 37oC for 48 hours and were protected from light to prevent CPZ-HCl photolysis. Ionic lipid ST and DCP were incorporated at a concentration of 0.1mg.ml-1. For pH studies, 0.1M NaOH or 0.1M HCl was used for pH adjustment. 5ml liposomal dispersions were used for determining UE. The UE was determined by timing twenty different particles in each direction and the mean taken.

The following experiments were carried out: 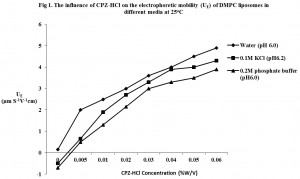 FIG.1: THE INFLUENCE OF CPZ-HCl ON THE ELECTROPHORETIC MOBILITY (UE) OF DMPC LIPOSOMES IN DIFFERENT MEDIA AT 25°C 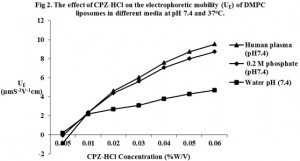 FIG.2: THE EFFECT OF CPZ-HCl ON THE ELECTROPHORETIC MOBILITY (UE) OF DMPC LIPOSOMES IN DIFFERENT MEDIA AT pH 7.4 and  37°CThis negative mobility of DMPC liposomes was observed to increase linearly with increasing KCl concentrations (Fig.3). 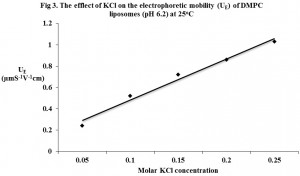 FIG.3: THE EFFECT OF KCl ON THE ELECTROPHORETIC MOBILITY (UE) OF DMPC LIPOSOMES (pH 6.2) AND 25°C

The mechanism of selective adsorption of Cl- ions over K+ in KCl and phosphate ions over Na+ in the phosphate buffer can be attributed to the assumption that cations are generally more hydrated than anions and so they have greater tendency to reside in the bulk aqueous media whereas the smaller, less hydrated and more polarizing anions have the greater tendency to be preferentially adsorbed 47. DMPC liposomes acquired a negative charge in human plasma (pH7.4) at 37oC (Fig. 2). Similar results were reported using phosphatidylcholine/cholesterol liposomes prepared in human plasma 48 and it was shown that the acquired negative charge is due to the adsorption of α2-macroglobulin fraction of the plasma protein. It was observed that both neutral and ionic liposomes interact with α and β-globulin fraction of the plasma protein and acquired net negative charges 49.

The addition of increasing CPZ-HCl concentrations to DMPC liposomes in water (pH6.0), in phosphate buffer (pH 6.0) and in 0.1 M KCl (pH6.2) at 25oC (Fig. 1), as well as to DMPC liposomes in water (pH 7.4), in 0.2M phosphate buffer (pH 7.4) and in human plasma (pH7.4) at 37oC (Fig. 2), was observed to shift the electrophoretic mobility towards positivity. This indicates an increase in the surface concentration of positively charged CPZ ions, where CPZ-HCl is predominantly at these pHs. The shift in electrophoretic mobility of DMPC liposomes in human plasma towards positive mobility was observed to be considerably reduced compared with other media (Fig. 2) and this may be attributed to the possible interaction of part of the positively charged CPZ ions with negatively charged α and β-globulin fraction of the plasma protein. The effect of ionic lipids on the electrophoretic mobility of DMPC liposomes in the absence and present of CPZ-HCl in phosphate buffer (pH 6.0) at 25oC was also investigated (Fig. 4). 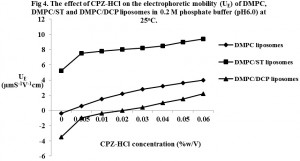 FIG.4: THE EFFECT OF CPZ- HCl ON THE ELECTROPHORETIC MOBILITY (UE) OF DMPC, DMPC/ST AND DMPC /DCP LIPOSOMES IN 0.2 M PHOSHPHATE BUFFER (pH 6.o) AT 25°C

DMPC liposomes in water over a pH range (2-12) showed negligible electrophoretic mobility (Fig. 5). This agrees with similar studies reported in literature 52. Since the phosphatidylcholine molecule contains both a negative phosphate residue and a positive –N+(CH3)3 group on the choline moiety, the net charge effect is zero. Hence phosphatidylcholine molecule is known to be isoelectric over a wide pH range.

The mobility of the positively charged DMPC/ST liposomes remains almost constant throughout the pH range studied (Fig. 5). The addition of CPZ-HCl to both DMPC and DMPC/ST liposomes, increases the mobility towards positivity (Fig. 5). At low pH values, higher mobilities were observed and the mobility started to decrease when the pH values approached the pKa of CPZ-HCl of 9.2 (Fig 5). This decrease in the electrophoretic mobility at pH values higher than the pKa of the drug is due to the fact that the unionized form of CPZ predominates over the ionized form. 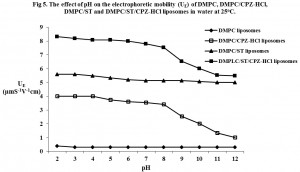 FIG.5: THE EFFECT OF pH ON THE ELECTROPHORETIC MOBILITY (UE) OF DMPC, DMPC/CPZ-HCl, DMPC/ST AND DMPC /ST/CPZ-HCl LIPOSOMES IN WATER AT 25°C

FIG.6: THE EFFECT OF pH ON THE ELECTROPHORETIC MOBILITY (UE) OF DMPC IN WATER AND IN 0.1 M KCl, DMPC/CPZ-HCl, IN 0.1M KCl DMPC/DCP AND DMPC/DCP/CPZ-HCl LIPOSOMES IN WATER AT 25°C 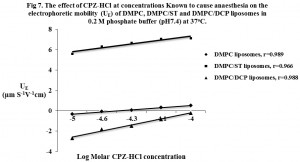 FIG.7: THE EFFECT OF CPZ-HCl AT CONCENTRATIONS KNOWN TO CAUSE ANAESTHESIA ON THE ELECTROPHORETIC MOBILITY (UE) OF DMPC/ST and DMPC/DCP LIPOSOMES IN 0.2M PHOSPHATE BUFFER (pH 7.4) AT 37°C

The incorporation of cationic and anionic lipid produced additive-induced charges in the surface charge characteristics of the liposomes. The addition of CPZ-HCl shifted the mobility of neutral, positive and negative DMPC liposomes towards positive mobility.

At pH values equivalent or more than the pka of CPZ-HCl, the mobility of DMPC liposomes decreases which is due to the predominantly unionized form of the drug. Linear relationship were observed between the  electrophoretic mobility of DMPC, DMPC /ST, and DMPC /DCP liposomes as a function of log molar CPZ-HCl  concentrations known to cause anesthesia.

ACKNOWLEDGEMENT: I would like to express my special thanks to Professor I.W. Kellaway for his valuable and constructive suggestions during the planning and development of this article.