The global demand of concrete is increasing every year and generally is considered as most consumed material on earth. But concrete is vulnerable to deterioration, corrosion, and cracks, and the consequent damage and loss of strength requires immensely expensive remediation and repair. One such mechanism that receives increasing attention in recent years is the ability for self-repair. So a novel and inexpensive method is available for overcoming the mentioned problem. The microbial concrete makes use of calcite precipitation by bacteria. A specific group of alkali-resistant spore-forming bacteria related to the genus Bacillus was selected for this purpose, the phenomenon is called microbiologically induced calcite precipitation (MICP). Bacillus Pasteruii, a common soil bacterium, can induce the precipitation of calcite. Due to its inherent ability to precipitate calcite continuously, bacterial concrete can be called as a “Smart Bio Material” for repairing concrete.

INTRODUCTION: Every year, the equivalent of more than 400 million dump trucks of concrete is transported to construction sites. Every man, woman, and child on the planet “consumes” around forty times their own weight in concrete per year. As presently about 7% of the total anthropogenic atmospheric CO2 emission is due to cement production, mechanisms that would contribute to a longer service life of concrete structures would make the material not only more durable but also more sustainable. One such mechanism that receives increasing attention in recent years is the ability for self-repair 1.

The answer, thanks to our microbial friend, would seem to be yes, through the process referred to as biomineralization, microbiologically induced calcite precipitation (MICP). The chemistry of concrete is alkaline, but fortunately, bacillus pasteurii tolerates this - it simply needs nutrition, space to work, and a little encouragement. The MICP is a technique that comes under a broader category of science called biomineralization. It is a process by which living organisms or bacteria form inorganic solids. Bacillus Pasteruii, a common soil bacterium, can induce the precipitation of calcite 2.

Due to its inherent ability to precipitate calcite continuously, bacterial concrete can be called as a “Smart Bio Material” for repairing concrete. The MICP comprises of a series of complex biochemical reactions. The bacteria precipitate calcite in the presence of nutrients. The optimum pH for growth of B. Pasteurii is around 9. The alkaline environment of concrete with pH around 12 is the major hindering factor for growth of bacteria 3. So when a bacterium comes in to the contact with atmosphere their growth is hindered. Microscopic (ESEM) views and image analysis (IA) of the bacteria (fig. 1) modified mortar (thin-section) showed significant textural differences with respect to the control (without bacteria) samples (fig. 3). X-ray diffraction (XRD) study confirmed the formation of new phases of silicates (Gelignite) within the matrix of such mortar material, which cause an improvement in the strength of the material. Electron probe microstructure analysis (EPMA) suggested that the bacterial treatment promoted uniform distribution of silicate phases and increased the calcium/silicon (C/S) ratio within CSH gel of the matrices. The bacterium is found to leach a novel protein, which is capable of isolating silica from its source 4. 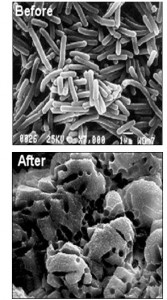 The actual procedure is very simple which only involves the spraying of bacterial suspension in nutrient medium in the observed cracks. Under favorable conditions Bacillus Pasteruii, when used in concrete, can continuously precipitate a new highly impermeable calcite layer over the surface of the already existing concrete layer. The precipitated calcite has a coarse crystalline structure that readily adheres to the concrete surface in the form of scales. In addition to the ability to continuously grow upon itself, it is highly insoluble in water. It resists the penetration of harmful agents (chlorides, sulphates, carbon dioxide) into the concrete thereby decreasing the deleterious effects they cause. It is selective and its efficiency is affected by the porosity of the medium, the number of cells present and the total volume of nutrient added. The phosphate buffer or urea and CaCl2 have been found effective as nutrients. The bacteria precipitate calcite in the presence of nutrients 6 (fig. 2).

FIG. 3: MICROSCOPIC VIEW AFTER THE TREATMENT WITH B. PASTEURII

There remain problems of keeping the microbes alive for a long period of time, and retaining sufficient microscopic space in the concrete for them to have room to maneuver, but progress is being made (the addition of clay to the mix provides a safe haven). And, importantly, the more effective this process proves, the less concrete we will have to manufacture and the lower the associated carbon dioxide emissions from making cement.