ABSTRACT:  Street foods are very common sources of infectious diseases in Bangladesh. In present study the microbiological quality of three types of ice-creams obtained from street vendors in Dhaka city was evaluated.  The microbiological quality of commercially produced Ice-creams (milk based, lolly and kulfi) was identified by examining total viable count (TVC) and association of enteropathogenic bacteria. The TVC and coliform count were determined respectively on Nutrient and MacConkey Agar after 24 hours incubation at 30̊C. Association of Salmonella, Shigella were detected on SS Agar and Vibrio on Thio-sulfate Citrate Bile Salts (TCBS) media .The average TVC for milk based, lolly and kulfi  were 2.53x105 cfu/ml, 7.16x103 cfu/ml and 1.26x107 cfu/ml respectively. A total number of 86 strains were isolated from 3 types of Ice-creams. The association of pathogenic bacteria was the main concern though the TVC was apparently not so high. Besides this, the predominant types of bacteria of the family Enterobacteraceae and vibrionaceae were found (E.g. Plesiomonas, Enterobacter, Escherichia coli, Vibrio spp etc. Salmonella spp were isolated from milk based Ice-creams). So, the level of bacterial contamination founded in this study reflects the unhygienic condition.

INTRODUCTION:Ice cream is no longer considered as a confection or luxury, but a food. It is a product of a mixture consisting of milk, sweetener and stabilizing agents together with flavorings and coloring matter 1. Ice cream contains approximately 22 % milk solids.

Although ice cream is eaten as dessert, its significance in human nutrition is unquestionable, both in the positive as well as negative senses.

The protein and vitamin contents of ice cream are fairly low, but as a source of calcium it is as valuable as milk. The unfrozen ice-cream mix is an oil-in water-emulsion. Frozen ice-cream is a very complex mixture of fat globules, milk, non-fat milk solids, sugar flavor, color, frozen water (ice crystals) and air bubbles. A typical ice cream contains 12% fat, 11% non-fat milk solids, 15% sugar and about 1% minor ingredients, the rest being water 2.

Based on its constituent, ice cream is a nutritious food for human and also an excellent medium for the growth of many microorganisms including some of which may be pathogenic to human. Possible sources of these microorganisms in ice-cream have been reported to include raw materials used for the composition of ice cream mix such as separated milk and milk powder, cream, flavorings and coloring substances and stabilizers and from air during processing 3, 4. The presence of these organisms in pasteurized ice- cream could be due to their ability to survive the pasteurization process as the case with spore formers and they may persist in ice- cream product thereafter. Improper storage condition can also add possible source of contamination 5.

The richness in nutritive constituents of ice cream although has been realized by all but the production and handling of this food is very complex and is associated with many problems. So there are great difficulties in regards of microbiological quality of ice- cream which is sometimes far from satisfactory at many points like production, transportation, storage and biological. The biological agents contaminated with in food are traced to ingredients added post pasteurization and environmental factors, faults in storage tank, cracks in the plant and packaging materials.

In developed counties, ice- cream receives quality control measures to increase its shelf life as well as prevent potential threat of public health. Bangladesh is still backward in this respect due to non-enforcement of inspection act and lack of maintenance of standard in relation to hygienic quality of ice-cream; the consumers of this country are deprived of getting quality ice-cream 6. The microbiological status of ice-cream for public health significance is not known in Bangladesh.

The present study was undertaken with the objective to isolate and study the potential Gram negative pathogenic bacteria associated with the most common three types of street ice-creams. The choice of these three types of ice-creams were based on the fact that they are less expensive produced by small non branded factories and consumed largely by lower socioeconomic classes of the society especially young children who are also susceptible group to diarrhea and other abdominal diseases.

Sample collection: In order to carry out the qualitative and quantitative analysis of bacterial flora associated with the ice-creams, samples were collected from the street vendors selling Ice-creams atthe Malibagh, Khilgaon and Bashabo areas of Dhaka City. The street vendors of these three areas collected their ice-creams from the Saidabad, Rampura and Bashabo respectively, as production source. The vendors collected Ice-creams from the factories located in respective areas which were mentioned as factory 1, factory 2 and factory 3. Three different types of ice-creams were taken as samples for the study purpose. 5 ice-creams of each type were collected for the analysis. The ice-creams were Milk based ice-cream, Lolly and Kulfi. The samples were collected during August 2009 to September 2009. The time of ice-cream purchasing was around 9a.m to 11a.m.Ice-creams were collected from the street ice-cream sellers of Dhaka city using sterile containers, which were kept in ice-boxes and brought to the laboratory within 30 minutes of collection.

Sample preparation: The microbiological tests were carried out in the microbiological laboratory of Institute of Nutrition and Food Science University of Dhaka. One ice-cream sample was taken from the icebox. Then the packet of ice-cream was removed and placed in a sterile petridish. Several minutes had passed to be melted the ice-cream. After melting, 1ml of liquidified ice-cream was pipetted and transferred into sterilized cotton plugged test tubes containing 9ml of 0.9% sterile sodium chloride solution. Then they were mixed thoroughly by shaking 20 times. This time the solution was allowed to stand for 5-10minutes.Thus initial dilution of homogenate was prepared and from this homogenization further serial dilution were prepared.

Different types of bacteria colony grown on MacConkey, SS and TCBS agar were collected and maintained in Nutrient slant agar for further analysis. Bacterial colonies grown on Nutrient agar and MacConkey agar were tested immediately after their growth for morphological and cultural characteristics as well as bacterial loads was counted. Isolates from TCBS and SS agar were analysed for their morphological and cultural characteristics. Gram staining, KIA (Kligler’s Iron Agar) and MIU (Motility Indole Urea) tests were carried out according to the standard procedures for the biochemical properties of the isolates (manual of ICDDRB) appeared on MacConkey, TCBS (Thio-sulfate Citrate bile Salts) and SS (Salmonella-Shigella) media.

RESULTS AND DISCUSSION: The highest average viable bacterial count 1.26 x 107 Cfu/ml was found in kulfi. This value exceeds the safe standard value of 105 cfu/ml. Investigation revealed that the small-scale ice-cream manufacturer mixed curd in their milk for the preparation of kulfi. Curd contains huge amount of gram positive bacteria such as Lacto Bacillus, Streptococcus as starterculture. That’s why average viable bacterial count for kulfi was high.

In table 1, it can be seen that an acceptable range (7.16 x103cfu/ml) of bacterial load. This finding is in agreement to that of The Health Department of Shanghai, China considers ice-cream containing 100,000 bacteria or less per ml as unit for human consumption 7. Similar findings were also reported in various investigations 8. The average coliform count of milk based, lolly and kulfi ice-cream samples were 1.2x103cfu/ml, 4.94x102cfu/ml and 4.47x103cfu/ml respectively (Table 1). In one investigation it was stated that the tolerable limit of coliform for ice-cream is ≤10 cfu/ml 9. The standard for coliform count is ≤10/ml 10, 11. However in our study quite higher coliform count was observed in each sample.

Around the world, Salmonella is the most important agent causing food-borne illness, with Salmonella Enteritidis and Salmonella typhimurium predominating 12. Salmonella is a pathogen of both humans and animals. This organism gas caused outbreaks of human disease both in developed and developing countries 13.

In this study, most pathogenic microorganisms like Salmonella were found both in milk based and kulfi ice-creams. Vibrio was found in lolly and kulfi. E. coli was most common among the three types of ice-creams (fig. 1). Diarrhea caused by enterotoxigenic Escherichia Coli (ETEC) is highly prevalent in young children in developing countries as well as travelers to these areas 14 (table ). 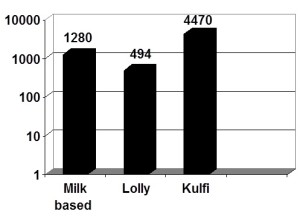 In Bangladesh, Vibrio cholerae is the bacterial pathogen that most frequently necessitates hospitalization 15. As most of the buyers of street ice-creams are poor young children, therefore they are more susceptible to diarrheal disease which can be caused by the pathogens present in the ice-cream products. The similar investigation was carried out among the same three types of Branded Ice-cream (IGLOO). The bacteriological status of these ice-creams is presented in Table 3.

As seen from the table the bacterial count is far below the acceptable level and also no coliform was detected. These findings support the results of other investigation where it was suggested that fresh ice-creams contained not more than 1, 00,000 cfu/ml of total viable count 8. In contrast, our study showed that the ice-creams sold by the non-branded street vendors are heavily loaded with bacteria and the most significant concern is that prevalence of pathogenic microorganism like E. coli, salmonella, Vibrio, Shigella was also observed. Therefore for safe public health careful monitoring of the ice-cream products of these small factories are urgently needed. Also further research on the association of these bacterial with diarrheal outcome or other gastrointestinal problems are necessary. It is clear from the overall results that ice-cream samples of IGLOO were the super quality, because the counts of total bacteria were less than recommended microbiological standard of Food and Drug administration and USPHS (1965).

The above study showed that the overall risk associated with the consumption of ice-cream is high. Although the total bacterial load depicted safe level but association of different pathogenic microorganisms can be a great threat to our health. The consumption of street ice-creams by the children is very high. As their digestive system is not strong enough, therefore they can be affected by various abdominal diseases like diarrhea, cholera, dysentery etc.

In the manufacturing processes, pasteurization is effective in destroying most of pathogenic bacteria and freezing and hardening processes can inhibit the microbial growth. Automatic machines that are widely used for ice-cream production in dairy industry minimize direct hand manipulation and possibility of cross contamination. Furthermore, low temperature (< 7°C) of ice-cream mix is unfavorable to the multiplication of bacteria.

ACKNOWLEDGEMENT: This research work was supported by the Microbiology Lab of Institute of Nutrition and Food Science, University of Dhaka, Dhaka 1000, Bangladesh.