ABSTRACT: The genus, Rubus is considered as highly potent plant crop and possesses economical, medicinal and ecological importance. Rubus plant species have been utilized inbreeding programme and has identified various pharmaceutical compounds. However, the taxonomy of the genus Rubus has been in a state of flux, because of the absence of comprehensive work and associated taxonomic disputes. Among the genus, most of them are referred to as ‘unresolved name” in the scientific database. The present study discussed the microscopic characterization of one unresolved species, ‘Rubus indicus’ and the examination were carried out by using their vegetative parts (root, stem and leaf). The systematic study of this high potent wild crop (R. indicus) has not been reported so far; hence, the resolved characters may be useful for proper species identification and for meaningful bioprocessing.

INTRODUCTION: The genus Rubus Linnaeus (1753: 492) 1 is one of the largest genera in the family Rosaceae comprises of about 1500 species 2. Rubus consist of high potent plant species, which has been considered as good germplasm for breeding programme 3, and also documented as folk medicine in various traditional medicinal system 4. Due to the significance of nutritional quality and antioxidant capacity inedible fruit, Rubus species have been utilized for healthy diet 5, 6. The fruit of many berry species are fleshier and are consumed in fresh, dried, frozen and product form 7, 8, and have high vitamins, high antioxidant capacity, simple sugars and essential mineral contents 9, 10.

However, the genus has been deemed as taxonomically disputed plants and is complicated by hybridization, polyploidy, agamospermy, and lack of a universal species concept 11, 12. Rubus indicus is commonly known as Indian Raspberry and distributed mainly in India, Sri Lanka, and Thailand. In India, the species has occurred in southern Western Ghats 13, 14, 15. The name was first proposed by Thunberg in 1813 16 based on his collection, gathered it from Srilanka.

The species comes under the subgenus Malachobatus, and its ploidy level represents 56 17. R. indicus is very attractive and can easily distinguish in naturally by its pretty vine-like leaves and laxly arranged inflorescence. The fruit has a red colour, very attractive and is edible 15. Presently, the species has been occurred as “unresolved” status 2, due to the absence of necessary data except for some notes in the local flora. Anatomical structure of a plant is most likely to provide evidence concerning the inter-relationships of larger groups such as families. Though anatomical characters cannot be treated as the base of classification, it can be regarded rather as an extension and supplement to the external morphological characters. Anatomy sometimes proves very helpful for individual identification. Microscopic methods are of great value in establishing the identity of herbarium specimens which are not accompanied by flowers and fruits 18.

The aim of the present study was to rectify the status of R. indicus from the unresolved state. Focused on this aspect, a detailed anatomical study has been carried out, and the description was prepared based on live samples collected from the southern Western Ghats. Here, the sections were sliced out from the vegetative regions such as root, stem, and leaf. Alternatively, the study is expected to provide prior information, which would be useful in species identification of this unresolved species.

Plant Material and Vegetative Parts: The live samples of R. indicus Fig. 1 were collected from Gavi forest, Kerala, India, during January 2018. The confirmation of the specimen was done by the perusal of available literature and protologue and pressed in Centre for Medicinal Plant Research (CMPR) herbarium (Voucher no. 11784). The vegetative parts (root, stem, and leaf) of the specimen were preserved out well in cooling condition for anatomical work.

Anatomical Study: Hand/microtome sections of the root, stem, and leaves were taken and stained with diluted aqueous safranin, washed thoroughly and mounted in 40% glycerin and observed under the microscope. Anatomical microphotographs were transferred using the computer controlled microscopic system and camera. Images are examined thoroughly and compared the anatomical characteristics.

Histochemical Analysis: The depositions inside plant cells such as starch grains, oil globules, and lignin are located using proper stains. For detecting the presence of starch, the section is treated with iodine solution so that the starch grains if present will turn blue. If the section is treated with Sudan Red S, the oil globules will be colored orange-red. Lignified cells are detected by treating with phloroglucinol followed by Conc. HCl which will turn lignified cells into dark pink or cherry red color.

RESULTS AND DISCUSSION: Microscopic characterization of the root, stem, and leaves of Rubus indicus can be summarised as follows

Root: TS of the root is circular in outline with irregular margin, and well-developed cork, cortical and stellar regions. Pith is almost absent and occupied by the xylem tissues. Cork is composed of tangentially elongated cells, which is divided into three zones namely phellum phellogen and phelloderm. Cork is 8-10 layers wide, and cells contain reddish-brown pigmentation. Oil globules are also seen in cork cell. Cortical cells are loosely arranged parenchymatous cells. Depositions of rosette and cluster crystals of calcium oxalate can be seen in cortical cells. Normally cortical cell layers vary from 10 - 20 in numbers depending on the maturity of the plant. Pericyclic fibers are seen either in groups or in the single in the outer cortex region. Phloem made up of compactly arranged condensed cells and is interrupted by the medullary rays extended up to the cortical region. Xylem contains tracheids, vessels, and parenchyma. Vessels are of varying sizes and can be single or in groups, and the shape varies from oval to polygonal. Medullary rays are uni to multiseriate often filled with starch grains at places. Pith is occupied by lignified cells Table 1 and Fig. 2 A-C.

Stem: TS of the stem is almost circular with wavy margins. TS show distinct epidermis followed by cortex, stele and pith regions. Epidermis is a single layer of elongated rectangular cells with thick cuticular covering and the limited number of elongated trichomes. Cortex is collenchymatous followed by chlorenchymatous hypodermis and parenchymatous cells. Some of the parenchymatous cells are also filled with chlorophyll are also seen. Rosette crystals of calcium oxalate are seen in cortical cells. Pericyclic fiber patches are present as a wavy ring above the phloem region. A thin-walled compactly arranged condensed phloem cells are found capped above the xylem. Calcium oxalate crystals are seen in this region also. Xylem consists of fibers, vessels, and parenchyma. The size of the vessel varies in each bundle. Each bundle consists of 3-4 big sized vessels and some small ones.

Leaves: TS of the leaf passing through the midrib is of dorsi ventrally convex arrangement with lower portion is more elevated. TS show an arc of centrally located broad merestele and few rudimentary vascular strands above it. Both the epidermis is followed by collenchymatous tissue. At lamina portion upper epidermis followed by palisade cells and mesophyll cells and lower epidermis with numerous stomata at places. In detailed view, upper epidermis and lower epidermis bear few uni to multicellular trichomes. At the midrib portion, an arc of centrally located merestele with 25-30 rows of vertically running 7-8 xylem vessels is present. Vessels are smaller in size at ends. Above the arc rudimentary vascular strands are seen. Phloem cells filled with small sized crystals of calcium oxalate. The remaining ground tissue is parenchymatous and rosette crystals of calcium oxalate are scattered throughout the region. Lamina shows 1-3 rows of palisade cells. Upper epidermis followed by narrow mesophyll cells and lower epidermis Table 1; Fig. 2 H-J. 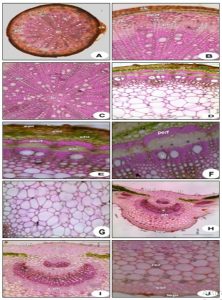 The anatomical features of plant parts have been preferred as resource material for taxonomic inferences in different groups of flowering plants 19, 20, 21, 22. But in the case of Rubus species, the anatomy-based taxonomic discrimination was carried out by using seed, pollen and petal parts 23, 24, 25, 26, even though, the information regarding the vegetative parts of Rubus species is still unknown.

The anatomical examinations of R. indicus has provided the information about the presence and nature of pericyclic fiber; size and shape of calcium oxalate crystals, presence or absence and a number of starch grains and oil globules, nature of epidermis and number of trichomes and arrangements of medullary rays. Data obtained in this study revealed the anatomical identity of current Rubus species, and they may be qualified as significant at the species level. According to Metcalfe and Chalk (1950) 18, the nature of pericyclic fiber is useful in species or genus level classification. Here, the microscopic stem image shows that the pericyclic fibers have occurred as a continuous ring with a wavy outline, but in root anatomy, it shows a group of fibre and seen in the outer cortex region. Various types of calcium oxalate crystals have been seen in cortex region of both stem and root and also in the ground tissue of leaves; hence the presence and shape of crystals and the occurrences of two or more type crystals might be useful for taxonomic classification 27, 28. These crystals have been located in various tissue such as epidermis, phloem, xylem, pith and cortex 29. The unique observation of flower-like cell arrangements in the pith region of the stem can be considered as a distinguishing feature. Uni, bi or multiseriate medullary rays extended towards phloem region may also be considered for good diagnostic characters for plant discrimination 30. Starch grains found in plants have characteristic morphological features, physical and chemical properties, which may be used as diagnostic characters to identify the plant species 31.

CONCLUSION: Studies on the microscopic characters of the vegetative parts of R. indicus such as roots, stem, and leaves are carried out, which can be a supplementary data for the plant identification. Anatomical and histochemical characters of the abovementioned parts were done, and this is the first time report on the present species. Nature of epidermis and trichomes, nature of pericyclic fiber; the presence of calcium oxalate crystals, presence or absence of starch grains and oil globules, and arrangements of vessels and medullary rays, etc can be considered as diagnostic features of the species.

ACKNOWLEDGEMENT: Authors are thankful to Dr. Indira Balachandran, Director, Centre for Medicinal Plant Research (CMPR), Malappuram for the facilities given. We are also grateful to Dr. K. M. Prabhukumar Scientists, Plant Systematic and Genetic Resources Division, CMPR, for their support and help for species identification. Authors are grateful to the Department of Forest, Govt. of Kerala, for providing necessary assistance during the fieldwork.

CONFLICT OF INTEREST: The authors declare there is no conflict of interest.