MICROSPHERES AS DRUG CARRIERS FOR CONTROLLED DRUG DELIVERY: A REVIEW

MICROSPHERES AS DRUG CARRIERS FOR CONTROLLED DRUG DELIVERY: A REVIEW

ABSTRACT: Microspheres play a very important role as particulate drug delivery system because of their small size and other efficient properties. Microspheres have been proved to be a suitable bridge to scale the distance over to formulate an effective dosage form, to simulate controlled drug release. Microspheres are characteristically free flowing solid powders, which consist of proteins or synthetic polymer, which are biodegradable in nature. Microspheres having particle size in range between 0.1-200 µm, can be delivered by several routes like oral, parentral, nasal, ophthalmic, transdermal, colonal etc. Various recent advancement in case of microspheres like mucoadhesive, hollow, floating, microballons, magnetic have been contributed to overcome the various problems that are associated with the use of microspheres, which includes site specific targeting and improved release kinetics. In future by combining various new strategies, microspheres will find a central place in novel drug delivery, particularly in diseased cell sorting, genetic materials, safe, targeting and effective drug delivery.

Controlled release refers to the use of drug delivery with the objective of releasing the drug into the patient at a predetermined rate or controlled rate at specific times or with specific release profile. With the problems like hygroscopicity of drug as in case of capsule and bioavailability problems associated with tablet, various advancements have been done to overcome the problems of conventional dosage form and microsphere is one of them 3-4.

Microsphere is small spherical particle having the particle size range 0.1-200µm, and made up of biodegradable and non-biodegradable material and can be injected by 18 or 20 number of needles 5-6. Drug absorption and side effects due to the irritating drugs against the gastrointestinal mucosa is improved because of small particle size of microspheres which get widely distributed throughout the gastrointestinal tract 7.

Basically each particle is the mixture of drug that is dispersed in a polymer and release pattern of drug follow the first order process. The release of drug is controlled by dissolution or degradation of matrix. Microsphere offers the Ball bearing effect due to their size & shape. Microspheres vary in quality, sphericity, uniformity of particle and particle size distribution. The appropriate microsphere needs to be chosen for each unique application. To control the drug administration, various opportunities are there for the preparation of microspheres.

It facilitates the accurate delivery of small amount of potent drugs and reduced drug concentration at the site other than the target site and protection of labile compound before and after the administration and prior to appearance at the site of action. By coupling the drug with carrier molecule we can change the behavior of drug in-vivo. The behavior of carrier molecule can affect the clearance kinetics, tissue metabolism & cellular interaction of drug. The exploitation of these changes in Pharmacodynamics may lead to enhanced therapeutic effect 8.

The goal of this controlled drug delivery system is to provide a therapeutic amount of drug at the required site promptly and after achieving therapeutic level, to maintain the desired drug concentration at the site of action 9.

Oral route is the most convenient and commonly employed route for most of the drugs. Some Drugs that are easily absorbed by the G.I.T. and having short t1/2 are eliminated quickly from the blood circulation. Controlled Drug delivery System can avoid the problems of conventional drug delivery system by releasing the drug slowly into the G.I.T. and maintain a constant drug concentration in the serum for longer period of time 10.

The number and chemical diversity of drugs has increased, new and updated strategies are required to be developed for orally active therapeutics. Thus, gastro retentive dosage forms, which prolong the residence time of the drug in stomach and improve their bioavailability, have been developed11.

A number of different substances both Biodegradable and Non-biodegradable have been investigated for the preparation of microspheres. This includes polymer of Natural and Synthetic origin and also Semi synthetic polymers.

Method of Preparation of microspheres:

The choice of method of preparation depends upon the nature of Drug, nature of Polymer and duration of therapy. There are several techniques to prepare microspheres:

Several Carbohydrates and Proteins are mainly prepared by this technique. In this technique, natural polymers are first dissolved in aqueous medium and then dispersed in non-aqueous medium (oil phase) followed with next step cross- linking of dispersed globule; which can be achieved by 2 methods: 15 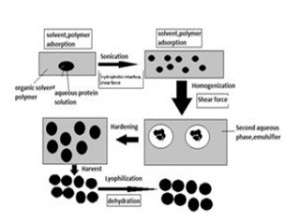 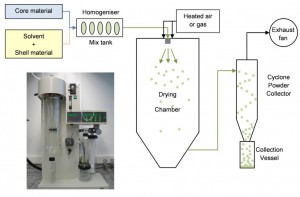 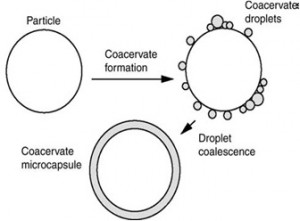 FIG.3: FORMATION OF COACERVATES AROUND THE CORE MATERIAL

Solvent Evaporation Technique: The polymer is dispersed in an organic solvent and the drug is either dissolved /dispersed in the polymer solution. The solution containing the drug is then emulsified into an aqueous phase containing suitable additives (surfactants/polymer) to form oil in water emulsion. After the formation of emulsion, the organic solvent is evaporated either by increasing the temperature under pressure or by continuous stirring. The solvent removal leads to polymer precipitation at the oil/water interphase of droplets, forming cavity 23, 24, 25 ( 4).

Particle Size and Shape: Particle size can be determined by optical microscopy with the help of calibrated eyepiece micrometer. The size of around 100 microspheres is measured and their average particle size is calculated 26, 27, 28.

The density of microspheres can be measured by using a multi volume pycnometer. Accurately weighed sample in a cup is placed into the multi volume pycnometer. Helium is introduced at a constant pressure in the chamber and allowed to expand. This expansion results in decrease in pressure within the chamber. Two consecutive readings of reduction in pressure at different initial pressure are noted. From two pressure readings the volume and hence the density of microsphere carriers is determined 29.

Isoelectric Point: The isoelectric point can be measured by using micro electrophoresis apparatus by measuring electrophoretic mobility of microspheres. The mean velocity at different pH value from 3-10 is calculated by measuring the time of particle movement over a distance of 1nm 30.

Angle of Contact:  The angle of repose Ø of microspheres, which measures the resistance to particle flow is calculated as

Where, 2h /d is the surface area of free standing height of microspheres heap that is formed after making microspheres flow from the glass funnel 31.

The surface chemistry of microspheres can be determined by using electron spectroscopy for chemical analysis (ESCA). ESCA provides a means for the determination of atomic composition of the surface. The spectra obtained using ESCA can be used to determine the surface degradation of biodegradable microspheres.

Fourier Transform Infrared Spectroscopy: Drug polymer interaction and degradation of microspheres can be assessed by FTIR 32-33.

Drug Entrapment Efficiency: Weighed amount of microsphere are taken and crushed. Then dissolved in buffer solution with the help of stirrer and filtered. The filtrate is assayed by UV spectrophotometer at particular wavelength by using calibration curve 34-35.

Percentage Yield: It is calculated as the weight of microspheres obtained from each batch divided by total weight of drug and polymer used to prepare that batch multiplied by 100 36-37.

This method allows the determination of release characteristics and permeability of a drug through membrane. In-vitro method is employed as a quality control procedure in pharmaceutical production and in product development etc. Sensible and reproducible release data derived from physically, chemically and hydro dynamically defined conditions are necessary.

Beaker Method: In this method Dosage form is made to adhere at the bottom of beaker containing the medium and stirred uniformly using over head stirrer. Volume of the medium used in the literature for the studies varies from 50-500ml and the stirrer speed from 60-300rpm 39-41.

Modified Keshary Chien Cell Method:  It utilizes specialized laboratory designed apparatus. It comprises of a Keshary Chien cell containing distilled water (50ml) at 37°C as dissolution medium. TMDDS (Trans Membrane Drug Delivery System) is placed in a glass tube fitted with a 10# sieve at the bottom which reciprocates in the medium at 30 strokes per minute 42-43.

Dissolution Apparatus Method: Standard USP or BP dissolution apparatus have been used to study in-vitro release profiles using both rotating elements Paddle and basket. Dissolution medium used for the study varies from 100-500ml and speed of rotation from 50-100rpm 44-48.

In-vivo method: Method for studying the permeability of intact mucosa comprises of technique that gives the biological response of the organism locally or systemically and those that involve direct local measurement of uptake or accumulation of penetrate at their surface. The most widely used methods of in-vivo studies include using animal models, buccal absorption tests.

Animal Models: It is used mainly for the screening of series of compounds, investigating the mechanisms and evaluating a set of formulations. Animal model such as dogs, rats, pigs and sheep etc. are reported. Generally the procedure involves anesthetizing the animal followed by administration of dosage form, withdrawing blood at different time intervals and analyzing 49.

Buccal Absorption test: It is most suitable and reliable method for measuring the extent of drug loss from human oral cavity for single and multi component mixtures of drugs. The test has been successfully used to investigate the relative importance of drug structure, contact time, initial drug concentration and pH of solution while drug is held in oral cavity. The test is carried to measure the kinetics of the drug absorption by swirling a 25 ml sample of the test solution for 15 min by human volunteers followed by the expulsion of the solution. The amount of the drug remaining in the expelled volume is then determined to assess the amount of drug absorbed 50.

In Vaccine Delivery: The prerequisite of a vaccine is protection against the microorganism or its toxic product. Biodegradable delivery system for vaccines that are given by Parentral route may overcome the shortcoming of conventional vaccines. Several parenteral vaccines have been encapsulated in biodegradable polymeric microspheres, including the tetanus and diphtheria vaccine51.

Imaging:  Particle size range of microspheres is an important factor in determining the imaging of particular sites using radio labeled microspheres. The particles injected intravenously apart from the portal vein will become entrapped in the capillary bed of lungs. This phenomenon is exploited for scintigraphic imaging of tumor masses in lungs using labeled human serum albumin microspheres.

Targeting Drug Delivery: The concept of targeting i.e. site specific drug is a well established dogma, which is gaining full attention. The therapeutic efficacy of drug relies on its access and specific interaction with its receptor53.

Radioactive Application: Can be used for embolisation of liver and spleen tumors. Used for radio synvectomy of arthritis joints, local radiotherapy, interactivity treatment, Imaging of liver, spleen, bone marrow, lung and even imaging of thrombus in deep vein thrombosis can be done 55.

Other Application:  Fluorescent microspheres can be used for membrane based technology for flow cytometry, cell biology, microbiology, Fluorescent Linked Immuno-Sorbent Assay 56. Yttrium 90 can be used for primary treatment of hepatocellular carcinoma and also used for pre transplant management of HCC with promising results 57.

CONCLUSION:  Microspheres are better choice of drug delivery system than many other types of drug delivery system. In future by combining various other strategies, microspheres will find the central and significant place in novel drug delivery, particularly in diseased cell sorting, diagnostics, gene & genetic materials, safe, targeted, specific and effective in-vitro delivery and supplements as miniature version of diseased organ and tissues in the body.

ACKNOWLEDGEMENT: The authors are thankful to Prof. J.V. Vaishampayam, Honorable Vice-Chancellor of C.S.J.M. University for his consistent encouragement.